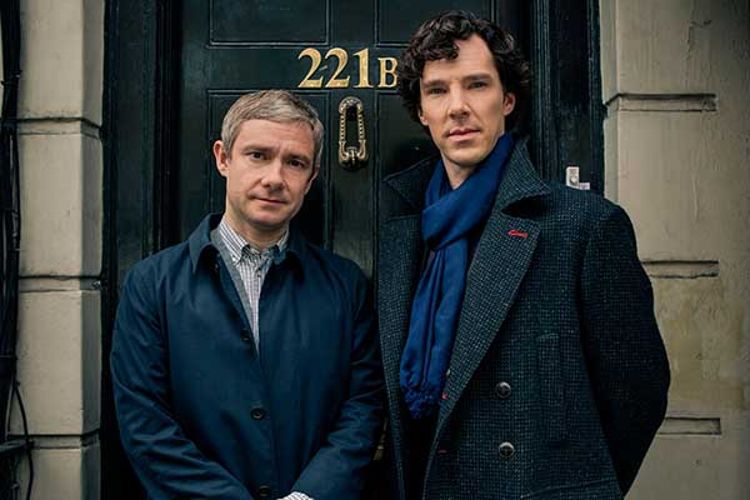 Things That Are Amazing

How does one go about making something modern? It’s rarely as simple as updating the threads and snipping the telephone cords; not all stories can be unstuck from their time. So what’s the secret? Is it swapping some genders and boosting the adrenaline? Is it raising the (wooden) stakes by adding vampires and stovepipe hats full of CGI? Or is it finding the sweet spot between making people laugh and making them furious? The hidden trap of remakes and reboots often lies in the trappings; the more time one spends tweaking the context, the harder it is to hold on to whatever it was that interested us in the first place.

British television baron Steven Moffat went in a different direction when cobbling together Sherlock, his masterful, contemporary reimagining of Sir Arthur Conan Doyle’s drug-addled detective. Yes, Moffat’s series — which returns for a second season this Sunday as part of Masterpiece: Mystery on PBS — embraces present-day London in all of its multi-culti, mobile-phone-messaging hypermania. But Moffat’s greatest accomplishment may be all the things he didn’t do. His Sherlock Holmes is the most relevant and compelling crime-solver on television — and Moffat managed this by not changing very much at all.

Doyle began his story 125 years ago with John Watson, a veteran of an ill-fated Afghanistan war, “worn with pain and weak from the prolonged hardships” he had undergone. London, “that great cesspool into which all the loungers and idlers of the Empire are irresistibly drained,” was, then as now, too expensive for a traumatized veteran of limited means. And so the good Doctor was forced to take a roommate, an exceedingly strange and observant one at that. With such beautiful — if a touch depressing — symmetry laid out for him, Moffat wisely stuck to the script. His Watson (Martin Freeman from the original Office) is also back from Kandahar, the War on Terror still raging inside his own battered mind. In fact, so much of Sherlock’s first episode, 2010’s “A Study in Pink,” was lifted effortlessly from Doyle’s own debut, “A Study in Scarlet,” that it’s a wonder the cheeky Moffat didn’t choose to open with a shot of Holmes (Benedict Cumberbatch) beating a dead horse. (Instead he’s beating a dead body. With a riding crop. And lest you think that choice implies a a nod to 21st-century kink, rest assured it’s also from the book: “[His passion] may be pushed to excess. When it comes to beating the subjects in the dissecting-rooms with a stick, it is certainly taking a bizarre shape!”)

Still, part of the pleasure comes from familiarity. Moffat’s protagonists soon take up residence in 221B Baker Street and begin taking on cases. Together, they assist and befuddle a Detective Inspector Lestrade (played with perfectly fraying patience by former fop Rupert Graves) and bicker about logic and reason as if they don’t understand one another when, in fact, it’s obvious they’re perfectly in synch. It’s all dizzyingly entertaining; simple curiosity cranked to the level of bloodsport. Even the format of Sherlock seems to hearken back to an earlier time, with each small season consisting of three 90-minute mini-movies in lieu of serialized installments. (This began as a choice and has become a necessity: Freeman has been busy filming the lead role in The Hobbit and Cumberbatch plays the villain in J.J. Abrams’s upcoming Star Trek 2.) Filler-free and remarkably fluid, these episodes feel like genuine events, not decentralized chapters that only make sense in the tightly organized confines of a Netflix queue. (By way of comparison, Guy Ritchie’s noisy, aggressively stupid Sherlock films, though period pieces, seem much more beholden to 2012 in both spirit and structure; assuming, of course, you’re the sort of person who uses words like “noisy” and “aggressively stupid” to describe our modern age. Hi, Dad!)

But if everything old can’t quite be new again, it can certainly feel fresh. And Sherlock is anything but stale; it’s a kinetic blast of cleverness and craft. Much of the credit goes to Moffat himself — although a healthy share belongs to co-conspirator Mark Gatiss, who, in addition to writing a third of the episodes, also plays Mycroft Holmes, Sherlock’s buttoned-up brother. Moffat proved his bantering bona fides while scripting a similarly anachronistic protagonist on Dr. Who, and his stories here, while loosely based on Doyle’s, are full of charming curlicues and humorous flourishes (this Sunday a rogue dominatrix greets Holmes in the nude — the only way to confuse his senses). But the real strength of the show is the tremendous chemistry between the leads. Freeman was ideally cast as Tim, the original Office slacker because he very often appears not to be working at all. His Watson is a similarly understated marvel, all everyman eyebrow-raises and cockeyed glances. But it’s actually quite hard to make things look so simple. In his own way, Freeman is as precise and calculating as Holmes, using a stiff, soldier’s gait to bring order to a messy and dangerous world. As for Cumberbatch, even his name sounds like it was beamed in from another, posher planet (or perhaps from a volume of Brian Jacques’s Redwall series; to me “Cumberbatch” suggests a cowardly but loyal hedgehog dedicated to guarding the castle’s stash of elderberry wine). Arch, brusque, and cold, with a stern brilliance that wavers between Asperger’s and asshole, his Holmes doesn’t miss a thing (a speck of blood, a stray animal hair) yet, in the process, whiffs on a lot. When sad-sack coroner Molly Hooper tarts herself up, he cluelessly asks her why she’s put on lipstick. To Holmes, everyone’s a suspect. Even when his heart is the only target.

Together, the two are such zippy fun — Sherlock showing up at Buckingham Palace in nothing but a bedsheet; Watson insisting to everyone that they’re not gay even though it’s clear how much they love each other — that the show’s artful, ingenious embrace of technology seems like a bonus. I can’t think of a single project — stage, screen, or otherwise — that’s managed to integrate our continuous chatter so smoothly: Text messages appear as words floating in the air, password prompts glow and throb, as inviting as neon signs. Even the smallest details can be pinched and dragged; the crime scene as iPad. But these garnishes too are consistent with Doyle’s vision. In the original stories, 221B Baker Street is described as being overwhelmed with papers stacked to the ceiling, clutter that only Sherlock himself could cut through. Today’s endless avalanche of information may lack shape, but it’s no less substantial. The laptops and smartphones are digital echoes of Sherlock’s own titanic brain, the original English ENIAC. It points, zooms, and clicks more efficiently than any hard drive, internal or otherwise.

In a neat, if inevitable touch, Watson chronicles the duo’s adventures not on paper but on a blog. The virtual readers log on, Watson explains to his unwilling “Internet phenomenon” roommate, because “people like to know that you’re human.” It seems as if it would take more than a Tumblr to convince skeptics — I’ve never met a person who can identify a forged Vermeer in under eight seconds, have you? — but there is something wildly relatable to this new incarnation of Sherlock. You can glimpse it in his pathological need for answers, how the thrill of deduction burns away faster than the tobacco in a Meerschaum pipe and how the satisfaction of solving a case is nearly outweighed by the despair of its ending. Holmes’s true enemy isn’t Jim Moriarty — smartly reimagined here as a “consulting criminal” and the only other person alive who sees the world as an enormous game of Clue (only he’s on the side of the candlestick) — it’s boredom. At one point in the first season, Holmes fires a handgun wantonly into the wall just to make something happen. Unlike the reflective Watson, Holmes’s talents only work in one direction: forward. He’s insatiable, always jacked up and turned on, desperate to fiddle with his gadgets and play another game. (The same might be said of Moffat and Gatiss. If Sherlock deserves any criticism it’s that the two tend to fold multiple mysteries into each other in increasingly intricate and implausible ways, like an origami red herring.) We may not all be brilliant detectives, but in our super-connected world Holmes’s inability to sit still isn’t unique — it’s downright elementary.

Filed Under: Things That Are Amazing, TV, Benedict Cumberbatch

More Things That Are Amazing

See all Things That Are Amazing