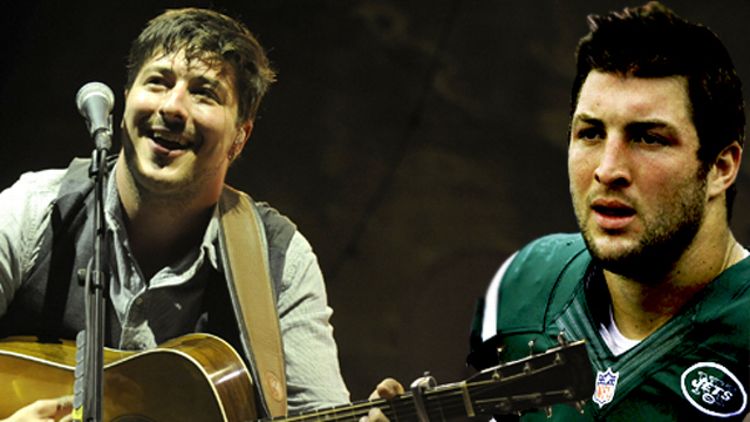 Mumford & Sons released their second album, Babel, this week, and the time has come for me to find some peace. From the moment I heard “Little Lion Man” — the breakout track from Mumford & Sons’ multi-platinum 2010 debut, Sigh No More — I knew I not only loathed the song, but I would probably loathe everything this band ever did. In retrospect, this does not seem reasonable. Mumford & Sons is a perfectly OK band. Sigh No More stakes out its territory and executes its goals successfully. It was a record designed to hit the sweet spot between the rustic introspection of Bon Iver and the rabble-rousing scrappiness of early Avett Brothers, and sell many more records than both bands combined. And that’s exactly what Sigh No More did, and (I’m sure) what the new Babel will do in the weeks and months ahead.

What’s wrong with that? Absolutely nothing. And yet my hostility toward Mumford & Sons remains. There’s just something about this band that rubs me the wrong way, and I couldn’t figure out why exactly until I remembered what Brian Phillips wrote last year about Tim Tebow: “Whenever I catch one of Tebow’s games, I tend to lose sight of the scoreboard and just focus on the metacompetition, the weird Joan of Arc drama that seems to go along with everything he does … I find myself half-consciously rooting for Tebow to fail, even though I have nothing against him.” I suddenly realized that Mumford & Sons essentially is Tim Tebow in an indie-rock context.

Mumford & Sons is not as overtly churchy as Tebow, though the band’s front man, Marcus Mumford, was raised by evangelicals who run their own record label. (This may or may not also be the premise of an upcoming NBC sitcom.) But Mumford’s Tebow-esque tendencies help to explain his band’s incredible popularity as well as the animus it inspires in cynics like me. First of all, Marcus Mumford (to quote my editor Mark Lisanti) actually sort of looks like Tebow, only “with a little bit of face-bloat.” But more than that, both men project comparably wholesome, inspirational personae. People love Tim Tebow because he plays hard and with demonstrable enthusiasm and because he seems like a throwback to a simpler (yet also tougher and grittier) period in American history; people love Mumford & Sons for basically the same reasons. (Even though they’re British.) Tebow and Mumford are bulwarks of conservatism in two of our brashest, crassest, and most rapidly evolving cultural spheres.

The most iconic moment in Tebow’s career is his “promise” speech after Florida lost to Ole Miss in 2008; your opinion of Tebow most likely is tied up in whether it’s admirable or cheesy for an athlete to be so openly earnest. Either way, Tebow is unique among athletes for just coming out and dictating the terms for how he should be perceived. This is also something Marcus Mumford does, again and again, on Babel. On the title track, he sings of tearing down walls and stretching his arms to the sky. On “Holland Road,” he pledges “if you’ll believe in me / I’ll still believe.” On the single “I Will Wait,” he insists that he will wait, he will wait … for you — yes you, poor listener, crying alone in the car on the way home from work and in need of some instant validation. Sometimes Mumford spells it out right in the song titles: He’s a “Hopeless Wanderer,” a “Lover of the Light” with “Lover’s Eyes” and a “Broken Crown.” Mumford even addresses his haters, if only to dismiss them. “I have no time / for a cynic’s mind,” he says on “Not With Haste.” Babel doesn’t just discourage interpretation, it renders interpretation moot.

Tebow and Mumford & Sons play very similar games: They are dynamic and rousing in short bursts, but their limitations take over in the long haul. The simple Mumford formula — quiet verse, roaring sing-along chorus, emotionally overpowering climax — is both grander and more blatant on Babel. When applied to one song, like the single “I Will Wait,” it can be very effective. (Even I can’t dislike “I Will Wait,” and don’t think I didn’t try.) Over the course of an album, however, it’s pretty wearying. The first three or four songs might penetrate your defenses, but after that you can predict where Babel is going to go and how it will try to get there, and simply bat it away.

The “metacompetition” around Babel isn’t religious in nature, though it is based in a different kind of high-minded idealism. Everything about Mumford & Sons screams “real,” as opposed to the “not real” of the E-fueled, nymphomaniac dance pop it implicitly stands against on the charts. But Babel is ultimately just as obsessed with producing peak after heart-hammering peak as any Calvin Harris record. It’s so relentlessly uplifting that you can barely breathe. Marcus Mumford undeniably is a star, but I wish he could relax and stay in the pocket more often.

Justin Timberlake's "CASTRATION CELEBRATION!" … and Other Horror Stories From This Week's Tabloids