May Book Recommendations: The Woman Upstairs, Who Owns the Future?, and Transit 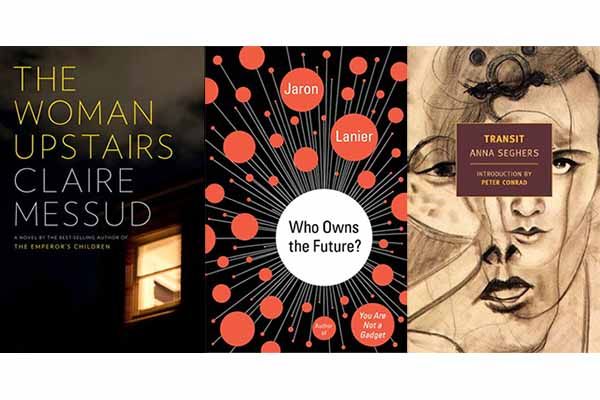 The Woman Upstairs, by Claire Messud

I recently watched the first season of Justified, and the pilot episode ends with U.S. Marshall Raylan Givens asking his ex-wife if he’s an angry man. She turns to Raylan and says that he’s the angriest man she has ever known. I kept thinking about this line throughout The Woman Upstairs, which opens with 42-year-old third-grade teacher Nora Eldridge asking, “How angry am I? You don’t want to know.” As it turns out, hell hath no fury like a schoolteacher. Nora is ready for a change, and she’s determined to take what she wants. But it’s what she wants that’s questionable.

Nora develops an infatuation with a bullied student, Reza, and his mother Sirena, an aspiring artist. What begins as friendship turns into an obsession. “Don’t all women feel the same? The only difference is how much we know we feel it, how in touch we are with our fury.” Nora is very much in touch with her fury and out of touch with everything else. She’s disgusted by everything around her, yet constantly making excuses for herself. The lack of self-awareness becomes the magnet that pulls the reader along as Nora attempts to insert herself in Reza and Sirena’s life.

The term “chick lit” is fairly controversial, and for a lot of good reasons. The Woman Upstairs is like anti–chick lit. It’s about a mid-life awakening, but one that descends into an interior, self-destructive sort of madness. It’s the most bitter thing I’ve ever read, and I loved every moment of it.

Who Owns the Future?, by Jaron Lanier

Jaron Lanier, who penned the very excellent You Are Not a Gadget in 2010 (a takedown of “crowd-sourced wisdom”), returns with an equally critical and more ambitious look at the way technology has and will transform our economy and culture. In particular, Lanier goes after “Siren Servers,” which are networks that gather massive amounts of data at no cost. That might sound abstract, but he’s referring to entities like Facebook and Google that succeed by “digitizing economic and cultural activity [that] will ultimately shrink the economy while concentrating wealth and power in new ways that are not sustainable.” That is, Siren Servers remove risk from themselves by taking advantage of a temporary imbalance in the market. Sometimes these disruptions are unintentional. (He cites Craigslist, which accidentally destroyed the business model for small-scale journalism by competing against local newspapers that relied on revenue from classified ads.)

The deeper subtext here is a criticism of the way we look at technology. Tech writers can only imagine a deterministic, everybody-wins future; the exaggeration of technology’s positive effects on people (despite Egypt being dubbed a “Twitter Revolution,” Lanier writes, “No one expects Twitter to help create jobs in Cairo”); and, of course, the inflated valuation of tech companies that don’t make any money:

“[I]nvestors are perfectly confident to value a Siren Server that accumulates data about people in the tens of billions of dollars, no matter how remote the possibility of an actual business plan that would make a commensurate amount of profit. And yet, at the same time, these same investors can’t imagine that the people who are the sole sources of what is so valuable can have any value.”

This is what separates Lanier from his peers: He believes in the value of people. Who Owns the Future? can often be dense and abstract, but all of Lanier’s ideas and criticisms are grounded in a deep humanism, a recognition that technology is shaped by people, not the other way around.

Transit takes the maddening bureaucratic loops of Franz Kafka’s The Trial and sets them in France during the Second World War. Having escaped two concentration camps, our nameless narrator is trapped in Marseilles, one of two neutral ports still allowing passage out of Europe, and spends much of the novel chasing down various papers and permits that will let him on a ship bound for America. One of those documents is an “exit visa,” granting permission for someone to leave the country, leading the narrator to ask, “What purpose is there in holding on to people who want nothing more than to leave a country where they would be imprisoned if they stayed?” (The response is a lot of laughter.)

Though it was originally published in the ‘50s (and this month, newly translated by New York Review Books Classics), the absurdity of Transit makes it feel timeless — like it exists outside of any real time or place. But that’s the haunting part: Transit is a very real story, based on Seghers’s own experience as a German Jew trying to flee France. The result is a darker Catch-22. There’s a sense of dread and hopelessness that pervades the novel. Marseilles becomes a state of existential limbo. The narrator is uncertain what to do while he waits. Should he keep chasing women? Have another drink? Does he even want to leave, if the destination might just mean more waiting?

TL;DR: Kafka on the shores of occupied France

Rembert Explains the '90s: 'Warm It Up' by Kris Kross