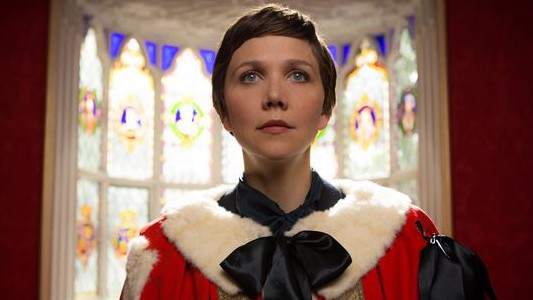 That the world isn’t easily divided into a binary — good/bad, black/white, RT/Fav — should be obvious. And yet a glance at social media over the last few tumultuous weeks suggested otherwise. As the Israeli campaign in Gaza intensified, so, too, did the ferocity and simplicity of online “debate.” Does your great-aunt in Boca really feel that comfortable tossing around the word “genocide”? Could your college roommate actually believe that a link to Mother Jones might change history? Probably not, but it certainly didn’t stop them. When faced with a calamitous, complicated situation, inaction can feel awfully similar to surrender. Choosing sides — and doing it loudly! — can help restore a fleeting sense of order to a universe that often seems dead set on rejecting it.

When we first encounter Nessa Stein, the protagonist of The Honorable Woman played with frosty poise (and a terrific accent) by Maggie Gyllenhaal, she appears to have placed herself far above that sort of fray. As a child she was witness to the gruesome murder of her father, a hawkish British/Israeli arms manufacturer. Since taking over the reins of his company, Nessa has sought to rebrand her family name as an innovator for peace, not a fierce defender of the status quo. In last week’s premiere, just before awarding a lucrative West Bank telecommunications contract to a Palestinian businessman, she declared that “the strongest wall we can help Israel to maintain is the one through which equality and opportunity can pass.” The shots that come her way, literal and otherwise, are deflected with a cool smile and an implacable optimism.

But as Nessa soon learns, the high-minded middle is its own sort of minefield. Her speech alienates and infuriates Shlomo, a sketchy Israeli businessman and longtime family friend. Her public appearances are magnets for furious idealogues on both sides. Her security detail is overtaxed and edgy. She sleeps fitfully behind the foot-thick walls of a panic room. And this is all before Samir Meshal, the aforementioned businessman, is found swinging from a flagpole. Was it suicide? Or political chess? As governments, spy services, and furious radicals swarm around her, it becomes clear that Nessa’s pragmatism might actually be naïveté. She hasn’t been making an example. She’s been making enemies.

An eight-hour miniseries, The Honorable Woman is a co-production between the BBC (which premiered it last month) and SundanceTV (which is airing it on Thursday nights at 10 p.m. ET). When it was commissioned, the show’s willingness to drag even crusading, fictional doves like Nessa through the mud was provocative. In the summer of 2014, it feels incendiary. Which is what makes its tone all the more remarkable. Creator Hugo Blick — the man responsible for The Shadow Line, a well-regarded crime series I’m eager to check out — takes a radioactive subject like the Middle East and packs it impeccably into a chilly, precise thriller. Set in a bleak London that resembles Radiohead designer Stanley Donwood’s doomy collages, the series unwinds itself with a grim, hypnotic sort of pessimism. The Stein family is, inevitably, built on secrets: Nessa’s brother, Ephra (Broadchurch‘s Andrew Buchan), has chosen to remove himself from the spotlight for mysterious reasons, and there are flashbacks to a terrifying episode in Gaza City that cemented an as-yet-unexplained bond between Nessa and Atika (Lubna Azabal), Ephra’s Palestinian nanny. Blick has a remarkable ability to make the unraveling of these threads appear as elegant as weaving them in the first place.

Of course “elegant,” in this context, can also be a code word for slow. And it must be said: The exposition in last week’s premiere was practically glacial at times. Which makes it all the more vital to communicate to you that at roughly the halfway point of tonight’s episode, The Honorable Woman ignites. As Nessa’s motivations become murkier, the series shifts its focus from Gyllenhaal to the great Irish actor Stephen Rea as a soon-to-be-cashiered spy named — wait for it — Hugh Hayden-Hoyle. Rea, a reliably rumpled presence in everything from The Crying Game to V for Vendetta, is absolutely astonishing in the role; he’s a machete masquerading as a butter knife. Once he begins his own investigation into Meshri’s death and Nessa’s potential involvement in it, The Honorable Woman recalibrates its phasers to full le Carré. The results are stunning. I won’t spoil tonight’s scene in which it all changes, but you’ll recognize it immediately: An interrogation leads to a blown cover and then, all of a sudden, to something far worse. The tension arrives so swiftly and is executed so masterfully that it takes your breath away. Imagine if Homeland were able to surgically strip itself of all of 24‘s raucous, dunderheaded DNA. And now imagine Blick sneaking into the hospital to rip out the sutures.

Whether The Honorable Woman will be able to build on this momentum remains to be seen — I’ve yet to watch the remaining episodes. But there’s no question I will be watching. It’s refreshing to encounter an entertainment so unsqueamish about the messiness of reality.  With his cool, exacting gaze, Blick doesn’t demonize any of the factions wrestling for control in the Middle East. But, more crucially, neither does he lionize them. What he does, instead, is expose the hypocrisy, cynicism, and fear that runs through them like blood. Consider it a respite from the noisiness of your Facebook feed — and, I suppose, an enormous downer. “It’s vanity, it’s all vanity,” sighs a character in tonight’s episode, driving home the show’s central, devastating conceit. All politics is personal. And that can be a very dangerous thing.

The ‘Juicy’ Standardized Test: How Well Do You Know Biggie's Anthem 20 Years Later?