Wait, did we start that way last week? Though it is a generally frowned-upon rhetorical gambit, nowhere in the Power Rankings bylaws does it say that we can’t open consecutive installments with the same thought, especially if it’s even more applicable now than it was just seven days ago. Don is back. Back to the firm, though this time he’s a dead man walking back to an even deader man’s office, stumbling through a ribbon-cutting ceremony for his own obsolescence. Back to day drinking, violating the New Draper Rules by smuggling vodka into the no-booze zone and chugging it from a can of Coke like a common curbside wino. Back to blowing off work he thinks is beneath him, heaving typewriters into windows. Back to waking up, fuzzy-headed and dry-mouthed from a sweaty Smirnoff nap beneath a Mets pennant, ready to take in a game if the Amazins happen to be in town. Back to lighting the match of his self-immolation, not realizing that his partners had already helpfully soaked him in gasoline, anticipating the expedient personal bonfire upon which they’d toast some marshmallows as his partnership burned away.

But then came good old Freddy Rumsen, the Ghost of Pants-Wetting Future, to grab Don’s arm before he could finally strike that match. He’s seen where Don’s sharp downward trajectory leads: to the bottom of that bottle wrapped in a Brooks Brothers jacket, to a life sock-puppeting pitches for your similarly disgraced former colleagues. And so Freddy rallied the hungover troop, exhorting him to get into his uniform, fix his bayonet, and hit the parade. (Which, presumably, does not involve an actual musket attack on the Underdog balloon at Macy’s Thanksgiving.) To Do The Work.

And so we cut to: Don striding with purpose to his shitty, dead-guy’s office. Don sitting down in front of the Coronet instead of attempting to shot-put it through the plate glass. Don cranking out his 25 or 50 or 75 Burger Chef taglines by lunchtime. Don deciding he’s not going to give them what they want, unless what they want is the pithiest, gut-punchingest evocation of a family trip to the local steaming meat-disc purveyor they’ve ever heard, fathers and sons and mothers and daughters making themselves whole over warm baskets of genuine emotion, thanks, Burger Chef, there’s love in every bite.

He’s ready to do the work. Even if just to avoid winding up like good old Freddy Rumsen.

Even if just to wipe the smug grin off Bert Cooper’s face.

Don opens his eyes. His head throbs. The room pulses along with the sickening beats of his blinding headache. The ceiling comes into focus. And then the orange Mets pennant on the wall.

The Mets. Was there a game today? Did he need to get over to Shea for the first pitch? Don sits up, begins to rub his temples. Tries to call up the schedule in his mind. His fingers massage the edges of his eye sockets.

He slumps there for a moment, head in hands, rubbing gently. And then he feels it.

A second pair of hands on his face. Kneading. Probing. He reaches up to grab them. They move to cover his eyes.

“Ssssh,” says a whispering, tender voice. “I’m here for you.” A voice he can’t immediately place, but which is familiar nonetheless.

The other hands caress Don’s face.

“How does that feel?” asks the voice.

Don pulls the hands aside. And stares into the face of the franchise.

The face of Tom Seaver.

“Swoboda loves this,” he says. “Coos like a sickly dove.”

Soon Don is prone on the couch again, lost in wave after wave of nurturing pressure.

He reaches up to grab the magic hands. But they’re gone.

He hears the ghostly crackle of an unseen transistor radio.

Don looks up at the pennant. It’s also gone. He closes his eyes.

So here’s the deal: An unasked-for, good-faith, $100-per-week raise and the lead on the Burger Chef presentation. And she can pick her own team, just as long as one of those team members is named Don Draper.

Instantly, the entire world is upside down. She sends a secretary to fetch Don to her (now much nicer) office, who implores him not to ruin his beautiful trim figure with Coke and candy bars. Solitary crying jags and humiliating fights over insufficiently labeled flowers are momentarily forgotten as she imagines, heart bursting with uncontrollable glee at the sudden reversal of their fortunes, the very real possibility that she may soon have the opportunity to tell him that’s what the money is for when he carps about receiving insufficient credit for his brilliant burger taglines. There is nothing quite so satisfying as a withering catchphrase turned back on its master.

Instead, this is what happens: She assigns the taglines. She’s met by a dead-eyed stare cold enough to flash-freeze an erupting volcano. Somewhere nearby a typewriter is murdered, an assignment ignored. When her Monday-morning deadline comes she’s got nothing but that dipshit Mathis’s stories about spaghetti.

Yes, in the end, Peggy got her taglines, but it took an entire bottle of vodka and a Freddy Rumsen intervention to get them. Lou Avery knew what he was doing when he shackled Don to her ankle, kicked them both overboard, and told her to get swimming. Thanks for the raise, Lou. Really appreciate it.

Up until the moment his daughter abandoned her child to become one, Roger seemed pretty chill about the hippie thing. He’d keep a few on hand for some mind-expanding marathon orgies, often waking to find a couple of them scattered around his bed, recoiling from the encroaching dawn, dazed and muttering about the silver fuck-locomotive that hit them in the middle of the night. But when they try to take his little girl, encouraging her to trade her family for the irresponsible freedom of the commune? No thanks, Sprout. Daddy will spend an evening smoking a doob and gaping at the star-speckled expanse of the night sky, but when morning comes he’s throwing Marigold in the car and driving her back to civilization to reclaim her Christian name. Unless, of course, she points out Daddy spent her childhood phoning in birthday gift orders to his secretary and Mommy missed a lot of it in the sadness-blunting blur of gin. Then things get a little more complicated. Maybe Marigold explores commune life a bit longer, and young Ellory gets more quality time with the grandparents. And maybe Roger flushes the remaining hippies from his apartment with a fire hose. Some worried parents are probably looking for them.

If onetime tragicomic laughingstock Freddy Rumsen can return from his extended exile to play such a crucial role in Don Draper’s final-season emotional development, we have to be prepared for virtually any marginal character, no matter how maligned, to return and potentially be redeemed in the Mad Men endgame.

That’s right: We’re saying a blind-drunk Duck Phillips may be back sometime during Episodes 8 and 14 to take a shit in the IBM 360’s punch-card slot, a move that will be hailed as a blow against the dehumanizing encroachment of technology in the advertising field. As his powerfully symbolic act is trumpeted around the industry, no one from SCDP will have the heart to point out Duck was actually trying to take a rage-dump in Don’s briefcase.

Is Realtor-slash-girlfriend Bonnie Whiteside perhaps a little too easily impressed by Pete Campbell? She witnessed that entire conversation with George Payton; Pete literally did nothing but luck into the possibility of landing a national campaign. He didn’t even know his own father-in-law had a heart attack. Who even knew he had a heart, amirite? Still, Bonnie coos, “I love watching you work. That was skillful,” as if walking ass-backward into $3 million of burger-chain business were an actual skill. Maybe it is. And if so, he would almost certainly be the best at it. No one stumbles into success like Pete Campbell, his business card would brag. And it would be a very nice business card. Bonnie would turn it over in her hand, marveling at its clean lines and crisp design, amazed at her luck in landing such a go-getting success-stumbler.

The pickings are really slim in California. In California, Pete Campbell is a king. 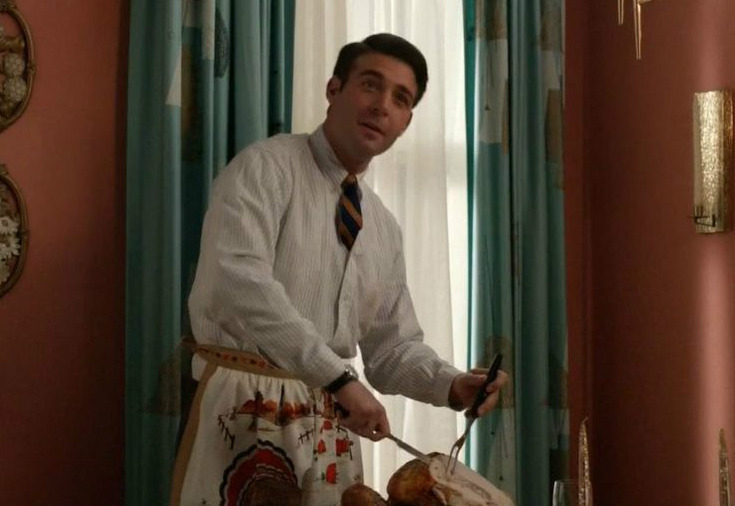 “Let’s see them give that to Bob Benson!” taunts Pete as the partners discuss the assignment of the potential Burger Chef business. Brave man, brave man. He knows that Bob Benson is safely trapped in some kind of supercriminal Phantom Zone in Detroit, often discussed but never seen, condemned to spend every remaining minute of his offscreen existence locked inside the spacious trunk of the Chevy account. Will we ever lay eyes on him again? We can’t know. We can only keep vigil here together, week after week, watching the uncarved turkey on the table, waiting for someone to return and carve it for us. We can only cling to our collective hope.

Ginsberg sees where this is all going: The lounge supplanted by a mainframe, creative giving way to quantitative. Humans ceding ground to robots. Perfectly nice orange couches swapped for ones entombing the stale farts of indolent copywriters. They may be trying to erase the artists, but they can’t erase that couch. One day it will also be full of farts. The farts of inspiration. Of victory. If they can just get it into that cramped office.

“I know what you’re afraid of. The machine. It’s frightening to people, but it’s made by people. It’s a cosmic disturbance, sure, maybe even a metaphor for whatever’s on people’s minds. It’s intimidating because this computer contains infinite quantities of information, and that’s threatening. Because human existence is finite. But isn’t it godlike that we’ve mastered the infinite? Aren’t I, for lack of a better word, a god for renting this precious gift to you at prices far more reasonable than those of IBM? Should you all not be prostrate before me and my wonder-machine, begging us not to destroy you with a power so great it can count more stars in a day than all of humanity can in a lifetime? We will count so many stars you will tremble on your filthy sofas, paralyzed by the awe of your own imminent destruction. Well, maybe not imminent. We haven’t taught it how to write taglines yet, we’ll need you to keep doing that for a little while we work it out. But that feature’s coming soon! And then you grunting, knuckle-dragging monkeys will toss aside your primitive tools, touch my monolith, and beat each other to death with the bleached bones of your ancestors. It’s all happening. And only some of us will be going to the moon. Not you.”

Even if they ultimately didn’t reach their ostensible goal of retrieving Margaret from the clutches of those lost, drugged-out, VD-riddled earth-worshippers, the Roger and Mona Road Trip ’69 was still a pretty resounding success. They’ll get more time with the grandkid. They’ve got more insight into their failings as parents, a real opportunity for personal growth (and to finally throw away all those gin bottles hidden in the bathroom medicine cabinet). And they let that starched preppy Brooks rot in a Kingston jail for a few hours. Things could have been worse. Mona could’ve been the one who wound up face-down in the mud puddle.

This is now officially becoming a thing where we put Lou down here at the bottom every week just to call him a dick. You’ll come to expect it, and we’ll deliver the goods. Are you ready?

Wanna see Professor X, Wolverine, and Magneto dance to "Blurred Lines"? Maybe you do, it's adorable.