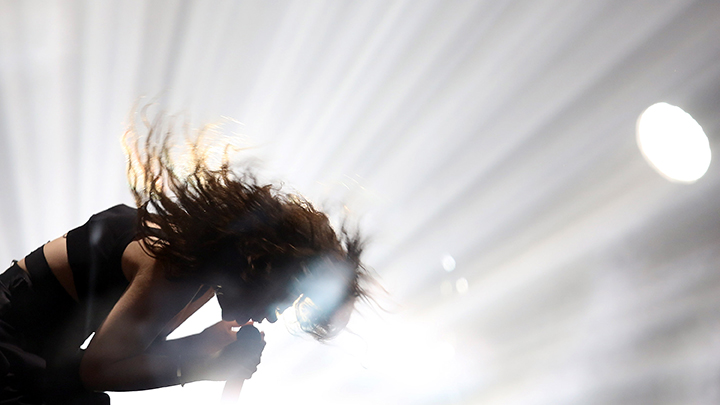 The Garden State soundtrack was a gateway drug of sorts, at least for me and my millennial kin. Before its arrival in 2004, my musical tastes ranged from “this summer’s Warped Tour lineup” to “whatever is playing on KROQ.” There were also a handful of Death Cab for Cutie songs sitting unplayed in my Limewire queue, arbitrarily downloaded, probably because a cute boy on MySpace had it listed in his “Music” section.

I went to see the now-seminal Garden State with friends, likely for the same reason: Someone cool had recommended it to us online. Teens weren’t the film’s target demographic, per se, but its quirky angst perfectly aligned with our own just the same, and identifying with it gave us cultural capital. Even if we didn’t understand mid-twenties malaise yet, the movie’s accompanying, Zach Braff–curated soundtrack interpreted it to us in terms we understood and aspired to; but it also opened new doors: Iron & Wine led us to the Decemberists; the Shins led to those half-forgotten Death Cab MP3s, then to Bright Eyes and Rilo Kiley. The Grammy-winning Garden State felt like a mixtape, custom-tailored by an older, cooler sibling (one with more than a million kid brothers and sisters), designed to change our lives; it led us to college radio stations, and sometimes even careers in music.

But if the newly released Mockingjay — Part 1 soundtrack tells us anything about where teens stand on music a decade later, it’s this: They no longer want, or need, our suggestions. Curated by 17-year-old pop queen (and Hunger Games fan) Lorde, and featuring an unusually brilliant series of collaborations that span the pop landscape from the Chemical Brothers to Pusha T, the record is an important milestone, long in the making: finally, a soundtrack for teenage fans has been compiled by an actual teenager, in an era that desperately needs that energy. Released via Republic, the record combines music supervisor Alexandra Patsavas’s original-music model with the one-artist conceit established by soundtracks like Curtis Mayfield’s Super Fly, Daft Punk’s Tron, Karen O’s Where the Wild Things Are, and Simon and Garfunkel’s The Graduate. The result is a new super-hybrid in the vein of John Legend’s 12 Years a Slave that is, more than anything, fandom-friendly. It’s the pinnacle of more than a decade of teenagers’ growing influence on — and bypassing of — the curatorial power of hip, older gatekeepers, and while it may not mark a sea change for the music of YA fandom franchise movies, it ought to.

In many ways, the first Mockingjay soundtrack is a culmination of a process born in the early aughts. That was, after all, the dawn of the curatorial era, when MP3 blogs were just beginning to emerge as more than the niche pursuit of the music obsessive. In 2004, for Hollywood’s music supervisors, “cool” music was just an RSS feed away. Filmmakers and showrunners got to use hip music for cheap, and smaller artists got massive exposure and financial security, far beyond the reasonable expectations of most indie bands. (After Garden State, sales of the Shins’ then-three-year-old record Oh, Inverted World skyrocketed, moving half a million copies by 2007.)

All of a sudden, artists like Feist and Imogen Heap became mainstream breadwinners; their songs scored Apple ads, and shows like The O.C. and Laguna Beach catapulted them into major label deals. If you knew how to pick ’em, you could also build a plush music supervision career by building well-timed playlists. This was the new A&R gig, and being a middleman became extremely valuable in an era when we were just learning what “music discovery” would mean in the digital age.

A decade later, alternative and DIY music is still being funneled into TV and film projects, but the process has calcified, becoming another standard (if necessary) industry process through which labels drum up new revenue streams for their up-and-coming artists.

At the same time, the rise of Tumblr and social media has made it easier for teenagers to bypass much, if not all, of those curatorial roadblocks set up by elder indie statesmen. This generation of teens have never experienced an Internet-less world. By the time a song hits a music supervisor’s radar, it has likely been bouncing around on various platforms for weeks, if not months. A TV spot might give a song a boost, but its coolness registers nowhere near “Hide and Seek” levels anymore, largely because it’s not that hard or that exciting to pick cool music that teens will like. (Tellingly, even with new songs from Bon Iver and the Shins, the soundtrack for Zach Braff’s Garden State follow-up earlier this year, Wish I Was Here, pretty much flopped; it debuted at no. 43 on the Billboard 200 albums chart — higher than Garden State‘s debut at no. 125, but with no hope of gaining early-Internet steam like its predecessor.)

Hollywood had to adapt. As digital natives make up more and more of the buying public, the YA film adaptation has predictably exploded; in a post-Harry Potter world, the entertainment business has paid extremely close attention to the passionate, young fan bases behind dystopian YA franchises, looking to port the fans of various series directly into the theaters. And just as the film business has changed, so, too, has the film soundtrack game.

“With such an enthusiastic fan base, the thing is that you can sort of create your own rules,” Patsavas told the Billboard/THR Film & TV Conference last year. “And one of [our] rules was that music shouldn’t have been heard before, that fans should experience it for the very first time.”

Patsavas, who supervised the music for The O.C., was referring to her work on the Twilight Saga soundtracks, which arguably took the film-soundtrack album-as-event to a new level, with their original-songs-by-hot-artists formula. The track listings were unexpected: Maybe Linkin Park and Muse made sense for a YA series about teen vampire love, but it was the inclusion of (at the time) more obscure artists like St. Vincent and Bon Iver that made the Twilight soundtracks a template of sorts. Future supernatural and dystopian YA franchises would follow suit, from Divergent (M83, Zedd, Ellie Goulding) to John Green’s The Fault in Our Stars (Charli XCX’s “Boom Clap” got a mega-boost from this summer’s teen sobfest).

Still, the model that broke bands like Snow Patrol became stale. Braff might have been able to convince Bon Iver to add to Wish I Was Here, but the moment was gone. The record still sold only 8,000 copies its first week, with no sign of picking up. The Divergent soundtrack, also released earlier this year, hardly did better, moving only 10,000 units its first week, while 2009’s Twilight: New Moon record has sold at Garden State levels, with more than 1.3 million copies to date (it debuted at no. 2 with more than half a million copies, and climbed to no. 1 in Week 2). Maybe the model was fading because it was no longer needed.

Enter Lorde, equal parts revolutionary, platinum-selling artist and 18-year-old girl. The minimalist queen has the double benefit of taste and enthusiastic closeness to the subject matter; she has the industry clout of a music supervisor twice her age, the creative legitimacy necessary to gather a project that veteran artists want to join, and the fan engagement that has sorely lacked in every YA soundtrack that’s come before. It’s unlikely that anyone else could have hosted a live Mockingjay Twitter Q&A, like she did Monday with her followers, while also bringing Grace Jones into the fold of such a young and mainstream venture.

“It was really important to me with the soundtrack that people really knew how involved I was,” Lorde told Billboard earlier this year, after explaining her deep affinity for the franchise’s beleaguered, heroic protagonist, Katniss Everdeen. “A lot of that was me reaching out to people really directly, having a conversation on the phone, sending an email, sending a text, because I wanted people to know that [their] song [wasn’t] just going to be flung into some pot and chosen later.”

Even if it doesn’t put up huge numbers, Mockingjay — Part 1 is a watershed moment. Thanks to her ability to cross the aisle between business and fandom, Lorde is able to accomplish what the greatest soundtracks (Pulp Fiction, The Graduate, Purple Rain) did, back when there was no Internet to reckon with: The record functions both as a great standalone album and essential component of the film itself.

Every track considers the subject matter — a story of social injustice, oppression, and coming of age amid that living hell — as seriously as a teenage listener might. In other words, it’s an act of fan engagement rather than mentorship. Finally, a movie about teens, (mostly) for teens, has gotten music by teens to match. If this idea falls through the cracks, as it very well might, instead of being recognized for what it is — the next evolutionary stage of film soundtracking — it’ll only ensure more Divergent soundtracks and fewer Twilight: New Moons.

Fans have been changing entertainment for decades now; their increasingly immediate presence often affects projects onscreen, from Star Trek and Supernatural to The Fault in Our Stars. It’s refreshing to finally see that bleed, at least a little, into the musical sphere. Teenagers in Japan are already crowd-sourcing their own pop stars, after all; why shouldn’t their authority also be considered in Hollywood? Who better to dominate this epic, all-knobs-to-11 space than people who are at an age when they feel everything all the time — and are dying to share it with each other?