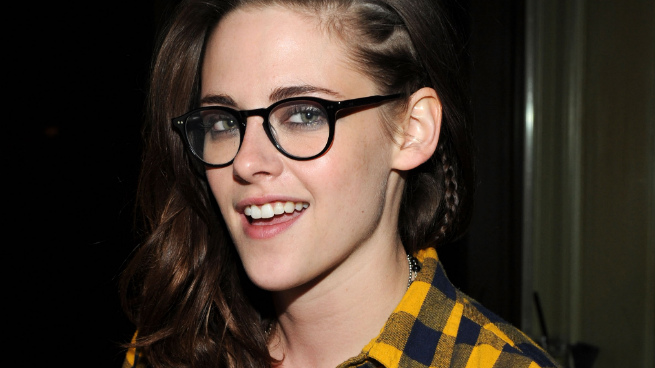 Kristen Stewart, human embodiment of a Tom Petty song, has written a poem that she shared with Marie Claire. After three pages of your typical celebrity-profile fare — dog names, sparely furnished house, the blue Vans she wore, a filmography, and truncated romantic history — you land on Page 4, which contains the money shot. The poem is titled “My Heart Is a Wiffle Ball/Freedom Pole”:

I reared digital moonlight
You read its clock, scrawled neon across that black
Kismetly … ubiquitously crest fallen
Thrown down to strafe your foothills
… I’ll suck the bones pretty.
Your nature perforated the abrasive organ pumps
Spray painted everything known to man,
Stream rushed through and all out into
Something Whilst the crackling stare down sun snuck
Through our windows boarded up
He hit your flint face and it sparked.

And I bellowed and you parked
We reached Marfa.
One honest day up on this freedom pole
Devils not done digging
He’s speaking in tongues all along the pan handle
And this pining erosion is getting dust in
My eyes
And I’m drunk on your morsels
And so I look down the line
Your every twitch hand drum salute
Salutes mine …

I know you’re probably pretty emotional so I’ll leave you alone for a minute.

OK, you’re back. I know that you probably had some issues here. “What is Marfa?” you might be asking, and because I read the entire Marie Claire article I can provide an answer: It’s a town in Texas (Stewart wrote the poem on a road trip a year ago, when she was driving through). “Fine, but what does ‘kismetly’ mean?” Nothing. It’s not technically a word. But it’s still less troublesome than when James Franco misspelled Los Feliz in his poem Los Angeles Proverb, which also contained the line “Girls so gorgeous brown, pounded into mush and then made into stories.”

We can quibble over the decision to use the word “whilst” and, further, the decision to capitalize it. But the poem itself isn’t bad enough to give you a case of the word-creeps; it’s the disclaimer Stewart gives to the interviewer (“Oh, my God, it’s so embarrassing. I can’t believe I’m doing this”) before going ahead and sharing it anyway that inclines you to indulge with a critical eye. I’d guess she is not really embarrassed of the poem itself because she goes on to say that “after I write something, I go, ‘Holy fuck, that’s crazy.’ It’s the same thing with acting: If I do a good scene, I’m always like, ‘Whoa, that’s really dope.'” Reading it back to herself, she got the zing. You know what the zing is, and how traumatic it can be when the zing doesn’t translate to your audience. That’s what’s embarrassing: taking that kind of risk in the name of a poem called “My Heart Is a Wiffle Ball/Freedom Pole,” especially when you don’t have to because you make $22 million in a year and could, if you wanted, just sit around getting carrot pulp on journalists, hitting the book club hard, and swaddling yourself in Navajo blankets. What makes cutting down Stewart’s poem easy, besides “kismetly,” is that she shared it because, deep in her poet’s soul, she was secretly confident that you, too, would feel the zing. And, understandably, you resist.

The line between good and bad poetry is smudgy and subjective. Crappy verse has been around forever, and even Wordsworth screwed up enough times to provide the title to an anthology of duds. We are kinder to bad poets who don’t have a backup plan (or any Navajo blankets), of course, and Stewart — like Franco, whose collection Directing Herbert White: Poems hits shelves in April — is kind of all set in that department. Then again, Stewart is a true Valley girl, and the neon, spray paint, dust, and sun are all present and accounted for. In her way, she always keeps it real, critics be damned. It’s that Ventura Boulevard sensibility, trapped like a wild thing slurping an Orange Bang hurtling through Texas far away from home.

Admitting to feelings of insecurity or embarrassment as a preface to sharing your work is rarely beneficial. I actually kind of liked Stewart’s poem. Maybe it would have been best if it had been discovered, tucked into a script, in 150 years, something so embarrassing its author would never put it in the pages of Marie Claire, and by then “kismetly” would have become a word and everyone would have considered Stewart a clandestine genius poet.

Speaking of secret missives, what better way to celebrate a Wednesday than by closing with James Joyce’s intended-to-remain-private love letters to Nora Barnacle? Have you seen these? They are not safe for work, life, weekends, or holidays. Wednesdays only, people. Settle in for story time:

Remember, these are private letters, and not just because they are about private parts. The moral quandary of reading them just makes them feel more illicit, and you should proceed at your own peril before reading the fart-worship that may color the air next time you crack open Ulysses.

Artists make strange decisions. Expressing yourself, and deciding what to release to the world (or what to convince your lovers to shred after reading), is a messy business. All of the organ pumps and salacious prose that start accumulating in your adolescent brain will make its way into what you create eventually, kismetly, and it will never be up to you to discern which of it is good and which of it is not. Burn, burn, burn like Kerouac’s fabulous Roman candles, and then burn, burn, burn your love letters unless you want them on Funny or Die.

And Your New Ted Mosby Is ... Greta Gerwig?!

Drake has some choice words for Macklemore's Grammys apology text.