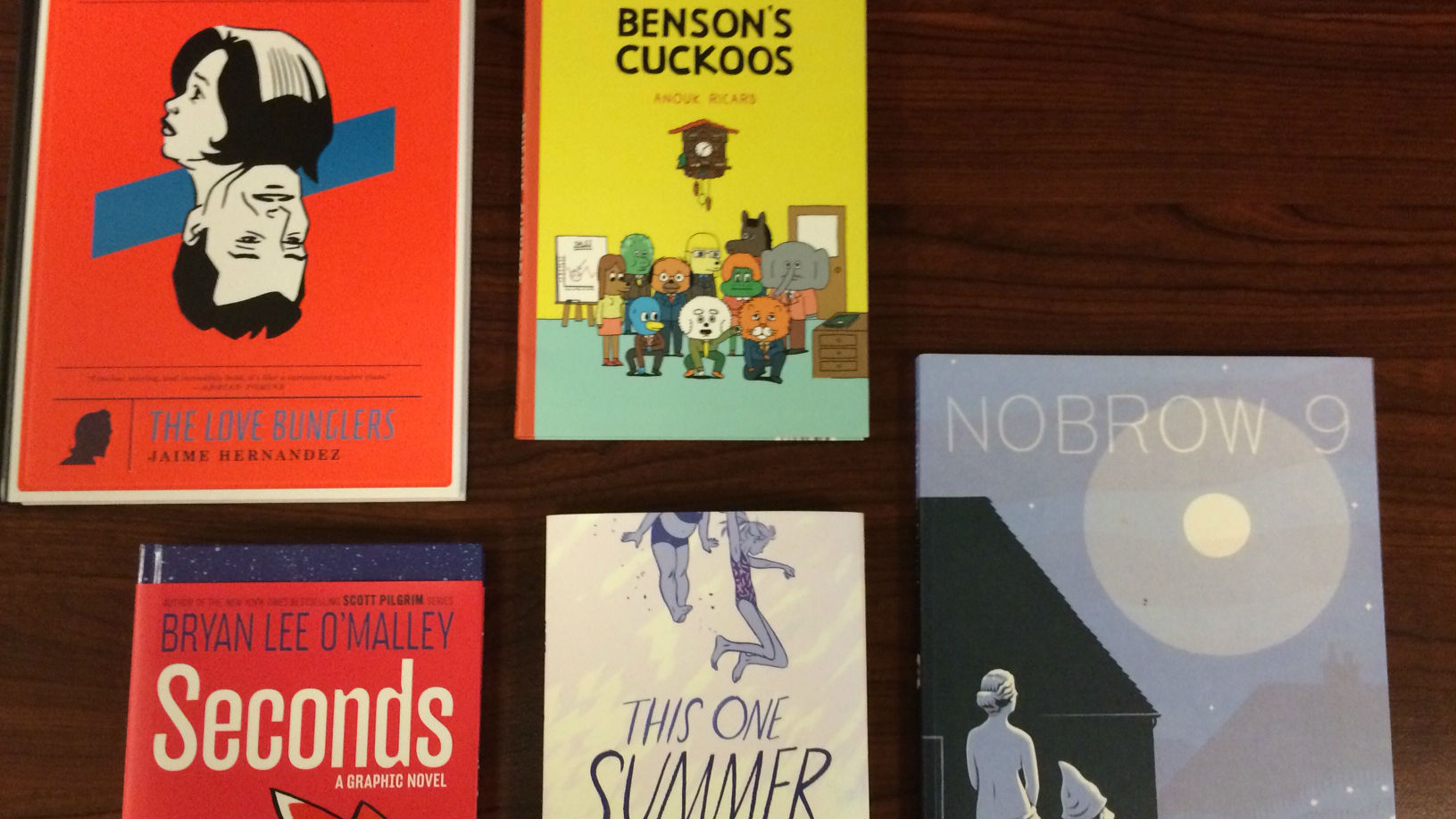 Though I have fond childhood memories of dropping by Newbury Comics weekly to spend my allowance on individual Spider-Man issues, I haven’t been able to keep up with serialized comics since I was a kid. Which is why I’m thankful that so many comics publishers — mostly independent ones — are putting out so many great literary stand-alone comics.

Delicately written by Mariko Tamaki and beautifully illustrated by Jillian Tamaki (they are cousins), This One Summer is a classic adolescent summer tale with an unconventional family portrait. It takes place during an annual vacation to a cottage town in Canada. The comic moves through a series of vignettes and moments, giving the story a swift but hazy sensibility, like recalling a lost memory. It’s in these narrative gaps that we put together the tougher parts of young Rose’s family life: her mother’s miscarriage and subsequent depression, and the resulting fights between Rose’s parents. There is also the widening gap between Rose and her summer pal Windy, whose interest in growing up is moving more slowly. There’s an internal conflict between Rose’s desire to become an adult (a boy, of course, is involved) and her clinging to the innocent nostalgia of summer vacation. The artwork is appropriately faraway, as well. The distance between Rose and Windy, the space between Rose’s parents — all of it is lushly rendered in muted shades of blue. As understated as it is, This One Summer really is one of the more stunning-looking comics I’ve read all year.

In less serious fashion, Benson’s Cuckoos finds French cartoonist Anouk Ricard delving into slightly more adult territory without losing the sense of color and aberrant wonder she captured so well in her children’s series Anna and Froga (which, to be honest, is a little bit too peculiar for most kids). With its eccentric cast of coworkers and Kafkaesque depiction of bureaucracy, Ricard’s work evokes something of a perverted Dilbert. But the story moves into stranger places once it turns into a whodunit. Richard, the newest employee at a company that makes cuckoo clocks, realizes the person he has replaced, George, has gone missing. (Oddly, no one seems to notice that George’s family has been appearing on television in the hope that someone can help locate him.) Like Ricard’s flat planes and crooked lines, the delivery of each joke is wry and off-kilter. (Richard gives the receptionist an apology card that reads: “Sorry I missed lunch and threw up.”) At its best, Benson’s Cuckoos recalls the same imagination and slapstick that imbue great children’s books.

Similarly, Bryan Lee O’Malley’s Seconds finds the author of the popular Scott Pilgrim comics taking his strengths and moving them into new territories. Seconds follows a selfish chef named Katie. She’s heartbroken but about to open a second eatery — one that belongs entirely to her — when she discovers that eating a special type of mushroom lets her revise the events of the day. She writes down her redos in a notebook labeled “My Mistakes,” but doesn’t learn a thing from them. In this story, more like Groundhog Day than Edge of Tomorrow, each iteration of Katie’s life only further complicates things. Though Seconds features the same sense of humor and close-but-not-quite-manga aesthetic of Scott Pilgrim, it has given up the geeky video-game nods for a healthier dose of magic and heart. For all the lunacy that goes on in Seconds, O’Malley shows an impressive amount of control. The revisionism conceit stays within certain bounds (all wishes must be made within the confines of the restaurant), and his characters fall into comfortable but likable archetypes. Even the colors and language and colorful language are confined to a warm, muted palette. It is perhaps this self-restraint that makes Seconds O’Malley’s most mature, most fulfilling work.

I’d argue that the most influential cartoonists of the past three decades have been the Hernandez brothers (affectionately known as Los Bros). Though the Love and Rockets series debuted in 1982, Jaime and Gilbert Hernandez have continued to produce some of the most consistent, boldest work in the field. With The Love Bunglers, which features several stories about Maggie Chascarrillo, one of Rockets’ best characters, Jaime has crafted a near-perfect story of a Southern California suburb and how sudden instances of violence can change the shape of a life. For all the story’s sparseness — both in dialogue and artistry — Jaime has somehow managed to craft a rich emotional landscape for Maggie, one that spans boredom and frustration and loss all within some 100 pages. Newcomers to Love and Rockets will find The Love Bunglers an accessible stand-alone comic and a great entry point to one of the most prolific artists in comics.

Last, and probably the weirdest of the bunch I’m recommending, is Nobrow 9: It’s Oh So Quiet, the ninth in a series of annual anthologies. Nobrow is as much as a showcase of contemporary illustrators as it is of cartoonists, and as a book, it captures the spirit of indie comics more completely than anything else out there. Nobrow expresses the daring and curiosity of minicomics (the field’s equivalent of zines) and assembles them into a single collection that feels disparate artistically but cohesive thematically. It’s unclear whether the subtitle refers to Björk or Betty Hudson, but this edition is, I believe, the first to completely forgo the use of words (save for a few comic titles), leaving its 30 artists and 16 cartoonists to explore atmosphere and mood in a place of textual silence. Nobrow 9 features as much chaos as it does subtlety; it operates in broad strokes without surrendering the minute details. We could debate whether it’s a comic book or an art magazine, but I think we’d agree that there’s very little else out there that’s as beautiful.

Tell ’Em: Everything I Never Told You moves with the velocity and inertia of a great literary mystery. The novel’s central question — who killed Lydia? — spirals outward, as a girl’s parents attempt to piece together why their daughter’s body was discovered in a lake. But the emotional core of Celeste Ng’s debut is what sets it apart. The different ways in which the Lee family handles Lydia’s death create internal friction, and most impressive is the way Ng handles racial politics. With a deft hand, she loads and unpacks the implications of being the only Chinese American family in a small town in Ohio. When the police rule Lydia’s death a suicide, her mother, Marilyn, says, “If she were a white girl, they’d keep looking.” The bigger idea in the novel is whether Marilyn, consumed by grief, is thinking clearly about her accusations. The scariest notion is that she might be.

Animal Care and Control: In the brief but closely observed chapbook Pity the Animal, Chelsea Hodson explores the idea that the female body is an object — an object often desired and possessed by men. Hodson recounts her time as a waitress, as a hookup, as a profile on a sugar-daddy website called Seeking Arrangement. She also engages with a world that has certain expectations about how women should be treated. One of the best tragicomic moments in the book involves Hodson narrating a YouTube video about how to sleep with strippers in Grand Theft Auto V. The format of the book resembles a pocket-size notebook, but one would be remiss to expect loose scribbling or unfinished ideas here. Even as the essay jumps from scene to scene, Hodson exercises a mastery of form and movement, tackling stories that are darkly funny and deeply personal.

Sex, Lies, and Videotape: At one point, Eddie wanted to be an actor, but his girlfriend at the time was the one who went on to star in a very successful medical drama. Years later, having faded into obscurity and facing a lot of debt, Eddie decides to sell a sex tape of them together for some cash. Things implode pretty quickly. Eddie is immediately identified as the person in the tape, his wife discovers he was the one who sold it, and suddenly Eddie is thrust into a different kind of D-list fame than he had expected. In the novel Arts & Entertainments, author Christopher Beha avoids a lot of the obvious tropes about celebrity (e.g., feel bad for the famous), opting for a more introspective approach to how these identities are constructed. When Eddie stars in a celebreality TV show, the producers ask him to recount what happened that day to the camera so they can use his narration as a voice-over. These scenes turn out to be times of self-reflection, ironically constructed and hilariously sad.

Kevin Nguyen (@knguyen) is a writer based in Brooklyn, NY.

Filed Under: Books, Books of the month, this one summer, bensons cuckoos, seconds, Bryan Lee O'Malley, the love bunglers, nobrow 9