Jay-Z’s Made in America: The Hova With the Mostest 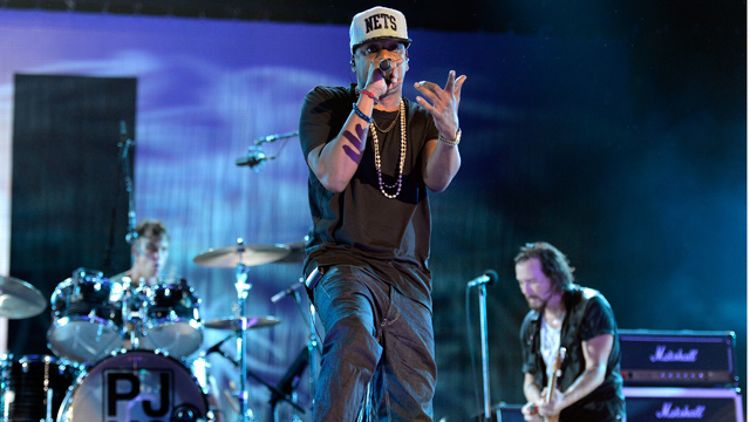 For months now, seeing the two largest names on the Made in America music festival bill say “Jay-Z” and “Pearl Jam” has been a startling, often confusing sight. Even with Jay’s ever-growing history of rocking to/displaying aptitude for other types of non-rap music (’04 Collision Course, ’08 Glastonbury, ’09 Grammys, ’10 Coachella), the Pearl Jam pick seemed odd and almost forcibly diverse, especially considering that the man picking the acts was Jay-Z himself. While Jay’s presence was the biggest reason for my trek to Philadelphia, there was something about Pearl Jam getting the last word at the festival, as the Sunday headliner with a 30-minute-longer set, that almost equally piqued my interest, even with my comparatively lacking knowledge of the corresponding headliner.

The first day was a buildup to the event’s host, Jay-Z. His handpicked “opening acts” were quite good, highlighted by three hours of non-overlapping sets. From the ignorant twerk-session that was “Pop That” during Maybach Music Group’s set, to Janelle Monae’s cover of the Jackson 5’s “I Want You Back,” to D’Angelo’s 12-minute funk finale that is “Sugar Daddy,” to Jay Electronica (Fuck that, Jay ElecHannukah, Jay ElecYarmulke, Jay ElecRamadaan Muhammad Asalaamica) simply proving that he exists outside of heiress gossip and Mountain Dew commercials, Jay did well in getting the crowd pumped for the main event.

What became clear in his set, however, and remained a constant throughout the festival, was that Made in America was simultaneously 100 percent about Jay, and weirdly not about him at all.

The first thing of note: Jay-Z’s 9:30 p.m. set started three minutes early. No, I have not attended every rap show in the history of rap shows, but there’s no way a hip-hop concert has ever started three minutes early, especially after following five other acts on that very stage. While this may seem insignificant, it does reflect on Jay-Z, not as a performer but as host. There was a schedule put in place, and due to some miraculous mixture of rule-following and tyranny, things went according to plan. No way I saw that coming.

Next thing of note: Jay had guests on guests, the first of which was Barack Obama. Was he present onstage? No, but he did pre-record a message about the festival, Jay, and getting out to vote. Yes, this is very much Jay flexing his Illuminati muscle, but again, it’s about more than simply Hova.

After Obama, and some solo-Jay time, he brought out the old, currently free (sorry, Beans) Roc-A-Fella crew. At this point, whenever he gives his old running mates any shine it’s almost a form of community service, but this time was especially important because they were in Philly, the home of Freeway, Young Chris, and Neef.

And then after more solo-Jay, he gave more of his 90-minute block away, this time 25 full minutes to Kanye West and G.O.O.D Music.

And then, if that weren’t enough, instead of finishing his set with one of his own tracks, he shared his finale with Kanye West, performing “N—-s in Paris” and then walking offstage with his partner while fireworks illuminated not only the nighttime sky, but also the steps Rocky Balboa made famous some 36 years ago.

And then there was a second day.

Day 2, for many individuals I surrounded myself with, was a buildup not to Pearl Jam, but to Aubrey Drake Graham. Again, the daytime sets were well picked by Mr. Carter, from the Philadelphia lovefest that was Jill Scott and Eve sharing a stage, to Gary Clark Jr. performing in front of a giant America flag, making it increasingly harder to not make Hendrix comparisons, to the Run-DMC reunion sans Jam Master Jay (but un-sans his two DJ-ing sons).

As Rev and DMC’s set ended and the next move was to walk across the venue to watch the always-energetic Odd Future, the strangest power struggle began at the various points of concertgoer migration. There was a full 45 minutes until Drake’s set and people were leaving to find bathrooms, food, beer, and Tyler, but even more were pushing toward the stage, attempting to get a good spot. My initial thought was that these were overeager Drizzy fans, but after multiple glances at the clothes worn by these driven individuals, it became clear these were not Drake’s people. These were Pearl Jam fans, and I knew they were Pearl Jam fans because, more often than not, their shirts said “Pearl Jam.” (For some reason, whenever I saw teenagers and young adults in YMCMB shirts, my instinct was to verbally chastise, but that very real urge never once applied for the Pearl Jam gear. I can’t figure out why, but seeing a couple with matching “PJ” tees push past me more than two hours before the show felt very right, even if they all had an affinity for elbowing me in the face.)

When it was time for Drake to play (again, three minutes early), he walked out in all white, presumably because it’s bad luck to wear the color after Labor Day, and launched into his large catalog. Interestingly, in addition to performing his songs and bringing out guests, he also gave a great deal of love to Pearl Jam. No exaggeration, he couldn’t stop talking about them. Instead of simply telling the crowd who was up next, he positioned himself as the guy who was opening up for the band Pearl Jam. Even though I already had my heart set on staying, Drake’s real excitement intensified my own, very real Pearl Jam excitement. Oh, Aubrey. How’d you know.

When Drake finally wrapped up, Made in America became an entirely different festival. People were exiting the festival in droves, but others were entering, seemingly making their first appearance at the two-day festival. Over the 45 minutes between Drake and Pearl Jam, everyone remaining in the venue had made their way to the main stage, creating one of the largest crowds of the weekend. This crowd was not deterred by the rain, nor by the mud it was creating on the grass. All it wanted was Eddie Vedder, his bandmates, and nothing else. I was pumped for the music, but even more thrilled for the fans who could barely contain their excitement for what was to come.

When Pearl Jam came onstage, again on schedule, starting with “Go,” it was the first of a 25-song set. As one hour became 90 minutes, the deadline of 11 p.m. crept closer, and I had run out of the five songs that I knew well (“Even Flow,” “Jeremy,” “Better Man,” “Alive”), but was still jamming like this was my favorite band, loving nothing more than jamming with people for whom this was their favorite band, as Eddie began another song.

And then Jay-Z walked onstage.

You know that moment when you leave a baseball game early because your team’s getting destroyed and you want to beat traffic, and then you find out the next morning that someone hit a walk-off grand slam and it’s a moment that your less-practical friends who stayed will talk about for the rest of their lives and you hate them (and more important, yourself)?

That’s what went through my head as Jay walked onstage. And then that only became amplified as it became clear that Eddie Vedder and Shawn Carter were about to perform “99 Problems.”

Assuming that this amazing moment would be the end of the festival, I prepped myself for the last four minutes of the weekend. But then, in perhaps the strangest, most unpredictable moment of his festival, Jay ended the song by simply saying “Peace and love” and just walked off.

And then Pearl Jam played one final song, thus ending Jay-Z’s Made in America festival with Neil Young’s “Rockin’ in the Free World.”

I couldn’t believe it. In perhaps the most superstar move of his career, by way of curating an entire music festival, his ability to let others steal some of his spotlight somehow made him come off like even more of an iconic figure. I very much traveled to Philly to see The Jay-Z Show, but I left thrilled to have spent two days at Jay-Z’s Show. They seem the same, but after experiencing the latter, they are quite different.

The first annual Made in America festival wasn’t about Jay. It was about what Jay could get away with. In case you were wondering, the answer is everything.

Filed Under: Drake, Jay Z, Pearl Jam, We Went there