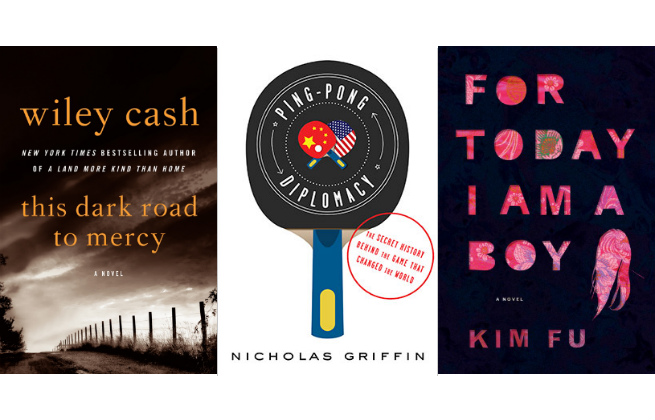 This Dark Road to Mercy, by Wiley Cash

After the sudden death of their mother, 12-year-old Easter Quillby and her younger sister, Ruby, are sent to a foster home. Their absent father, Wade, who long ago lost legal guardianship over his daughters, kidnaps Easter and Ruby and offers to take them wherever they want to go. “[W]e can go anywhere you want to go,” Wade pleads. “Just name it. I’m serious. Anywhere you want to go, that’s where we’ll go.”

Wade is the central mystery of Mercy. Easter slowly unravels his motives, while Brady Weller — an ex-cop and the Quillby girls’ legal guardian — uncovers a multimillion-dollar heist with which Wade may have been involved. Meanwhile, the most dangerous element of the novel, a recently released convict named Pruitt, is out to seek revenge on Wade.

When I recommended Wiley Cash’s debut novel, A Land More Kind Than Home, I said it was a strong example of Southern Gothic lit. But what exactly defines Southern Gothic? Its tone, its setting, an epigraph from Flannery O’Connor? From its first page, This Dark Road to Mercy at the very least satisfies the last of those criteria. But while Cash’s novel may not seem like Southern Gothic on the surface, Mercy’s three point-of-view characters reveal shades of other classic works. Easter’s precocious but impressionable nature recalls Scout Finch from Harper Lee’s To Kill a Mockingbird; Brady possesses the meditative moral core of the sheriff from Cormac McCarthy’s No Country for Old Men; and Pruitt is the ominous menace that haunts every great Gothic work.

The backdrop for this tale of crime and absolution is the ’98 home run chase between Sammy Sosa and Mark McGwire. It’s an odd contrast, but it works surprisingly well as the novel travels from North Carolina to St. Louis, with a final showdown converging at Busch Stadium. The devastating lesson Wade learns is that atonement — for his crimes, for his failings as a father — can’t be found in any one place. The road to mercy may be dark, but the path to redemption is long.

TL;DR: A good novel is hard to find. This is one.

Ping-Pong Diplomacy: The Secret History Behind the Game That Changed the World, by Nicholas Griffin

I don’t generally like jacket copy, but the pitch for Ping-Pong Diplomacy as Argo meets table tennis was impossible to resist. It’s also somehow a bit of an understatement, because the true story behind Ping-Pong’s history and its effect on the geopolitical landscape is even less believable than that scene in which the Iranian military are chasing Ben Affleck’s airplane.

The most prominent figure in Ping-Pong Diplomacy is Ivor Montagu, the British aristocrat responsible for bringing the sport to China as an entry point to Mao Zedong’s Communist government. It would also turn out that Montagu produced Hitchcock films and was a spy for Stalin (you really can’t make this up). Ping-Pong’s influence is anything but lighthearted, though. After the agricultural policies of Mao’s Great Leap Forward created three years of famine, the Communist government hosted the World Table Tennis Championships to prove to its people that things were going well, despite an estimated 15 million people starving to death. Montagu would vehemently defend the Great Leap Forward out of allegiance to Communist ideology.

Not all of it is quite as dark, though. The same tournament in 1971 opened the door to Richard Nixon’s historic visit to Beijing. Griffin’s book is full of colorful characters, and the one who’s almost as interesting as Montagu is Glenn Cowan, a player on the American team who resembles your most obnoxious stereotype of a hippie (“[he] wore his white ‘Let it Be’ shirt, a yellow floppy hat, and purple tie-dye pants”). It would be Cowan who stumbled onto the Chinese table tennis team’s bus to exchange gifts with their best player, Zhuang Zedong, unintentionally creating an opportunity for the first American delegation to visit China since Mao took power.

Little did the U.S. know that the entire scenario had been carefully plotted by the Chinese government. The meeting would be beneficial for both countries, but what the U.S. believed to be serendipity had been part of years of meticulous planning. It also represented a huge shift in the Cold War.

In regard to Cowan’s bus meeting, Griffin writes: “The incident seemed to contain all of what the world thirsted for. But the truth was subtler. It was the justification of Ivor Montagu’s belief in Ping-Pong as a form of diplomacy.”

TL;DR: Oh, how the (Ping-Pong) tables have turned.

For Today I Am a Boy, by Kim Fu

Fu’s debut, which takes its title from an Antony and the Johnsons song, might be deemed a quiet novel, but it’s one about quiet pains. Like the Antony song, this novel deals with the interior struggle of a girl born into a boy’s body. From a young age, Peter strongly identifies as female. He comes from a second-generation Chinese family in a tiny town in Ontario, where he is caught between the influence of his three sisters and his stoic father, with whom Peter never quite sees eye to eye. In fact, the father is one of the novel’s most interesting characters, caught in a conflict between his own Chinese identity and his desire to embody Western masculinity (a want that unfortunately gets imposed on Peter). Naturally, Peter sees his sisters as better role models. Speaking to his older sister Adele, he says, “I want to have hair like you. I want to be pretty like you.”

In secret, Peter finds joy in the things he associates with being feminine: cooking, cleaning, putting on makeup. Eventually, all four siblings move away from home — one goes off to university, another runs away with a boyfriend. Peter ends up working as a cook in Montreal, where he finds the freedom to further explore his feminine identity.

For Today I Am a Boy moves quickly and gracefully from moment to moment. Fu’s prose feels fragile but assured. But she is careful not to slip into facile explanations for Peter’s transgender experience, avoiding Freudian family dynamics or cultural stereotypes that could so easily make the novel feel disingenuous. Instead, Fu carefully balances the specific with the universal. Peter’s life is his own, but his coming-of-age narrative hits the right broader notes.

Though they share the same name, the Antony and the Johnsons song is about a much different perspective, its first line crooning, “One day I’ll grow up, I’ll be a beautiful woman.” There is no doubt in Peter’s mind that he is a girl, but it’s only at the end of the novel that he realizes he is able to be the person he believes he is, not what’s expected of him.

Notable in Fiction
• On Such a Full Sea, by Chang-rae Lee
• Foreign Gods, Inc., by Okey Ndibe

Notable in Nonfiction
• Uncharted: Big Data As a Lens on Human Culture, by Erez Aiden and Jean-Baptiste Michel