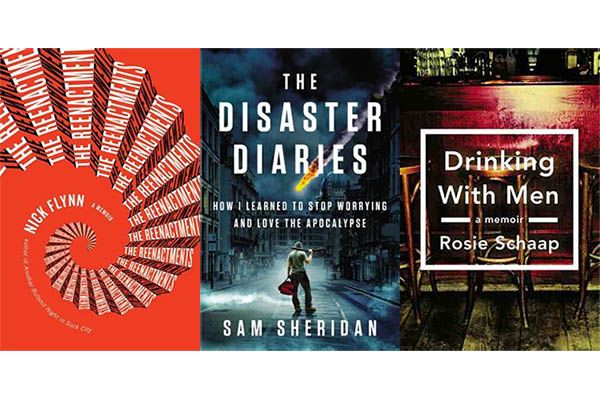 The Reenactments by Nick Flynn

My favorite Kurt Vonnegut novel is Timequake, in which a cosmic ripple forces everyone on Earth to relive the past decade of their lives but are unable to change any of their actions. It’s part Vonnegut autobiography, part exploration of determinism: People re-experience their greatest mistakes and the death of loved ones. The Reenactments puts memoirist Nick Flynn in a similar position.

Flynn has penned two books, one about his alcoholic father (Another Bullshit Night in Suck City) and one about his mother’s suicide (The Ticking Is the Bomb), which in 2012 were combined into a single film adaptation called Being Flynn. The Reenactments collects Nick Flynn’s experience penning the script and working on set. This isn’t a Hollywood behind-the-scenes sort of affair as much as it is a tale of Flynn coming to terms with seeing the hardest moments of his life staged and filmed. Flynn plays with a lot of ideas here: conflicts of self, consciousness, and memory are evoked through his interactions with the film’s director, Paul Weitz, and the actors in the film. There’s a great scene where Robert De Niro, who plays Flynn’s father, meets Flynn’s real-life alcoholic father in Boston, as well as some sticky interactions with Paul Dano, who plays Flynn himself. (Dano is equally poetic: In an e-mail to Flynn, he asks “Where are your scars?”)

The Reenactments is made up of short vignettes and moments, and for how disjointed the book is scene by scene, the narrative is surprisingly coherent. The most powerful motif Flynn returns to throughout the book is a collection of glass flowers housed at Harvard, which look so real that Flynn has trouble reconciling that they’re not:

I began to see the structure of the project as a triptych — flower, film, memory — something that could be carried under the arm, unfolded anywhere, to create an altar. Not one to pray before, but one that asks, What are you feeling right now?

(Also check out Timequake, if you haven’t already.)

TL;DR: I never saw Being Flynn, but I bet this book is a lot better.

The Disaster Diaries: How I Learned to Stop Worrying and Love the Apocalypse by Sam Sheridan

2012 was a great year for apocalyptic fiction, though it mostly featured characters wallowing about the end of days; perhaps 2013 will be the year of surviving it. Sam Sheridan, former Marine, mixed martial arts fighter, and Harvard grad (among other things), posits a simple question: How does one get ready for the end of the world?

Though it’s a work of nonfiction, The Disaster Diaries explores every catastrophic disaster, from floods and earthquakes to sci-fi scenarios like zombie infections and escaping giant alien monsters, and asks experts around the world exactly what preparations are needed. Sheridan uncovers survival skills (first aid, hunting in the wilderness, firing a gun) as well as some craftier tricks (hot-wiring a car, constructing an igloo). But The Disaster Diaries isn’t instructional. The apocalypse schemes serve as a lens that allows Sheridan to explore the limits of the human body and psyche and how physical and mental strength are inexplicably linked.

Sheridan also never takes himself too seriously. He’s enthusiastic, willing to train for any new survival skill. The Disaster Diaries didn’t exactly motivate me, a self-content book reviewer, to buy a pistol or start training to weight-lift. But at least when the apocalypse does arrive, I can take comfort that Sam Sheridan will survive, to continue the existence of the human race and smartly researched nonfiction books.

Drinking With Men: A Memoir by Rosie Schaap

Before I could go to bars, I never understood the point. You could drink at home for less, hang out in a more comfortable environment, and spend time with people you know in a place where you could actually hear them. This attitude of course changed the moment I turned 21, but even now, I’m not quite sure what the allure of a bar is — though I know there is one.

Drinking With Men is, in some ways, Rosie Schaap’s way of putting that allure into words. In the introduction, Schaap explains that bars have less to do with alcohol and bar stools than they do with the people who inhabit them. She writes, “It’s more like a community center, for people — men and women — who happen to drink.”

Best known for her Drink column in the New York Times Magazine, Schaap is no stranger to writing about drinking. The book is populated by lots of eccentric characters, an appreciation for Jameson, and some tips on bar etiquette (“Buybacks are like blow jobs. If you have to ask for one, you don’t deserve one”). But this memoir serves most powerfully as Schaap’s personal history of her favorite bars and what they represented in those eras of her life. From Irish pubs to dive bars in L.A. to cocktail bars in Brooklyn, Schaap uses these places to talk about her early life following the Grateful Dead on tour, studying in Dublin, and later living in New York. The essay that surprised me the most was her reflection on 9/11. I’ll admit I sort of rolled my eyes when I started it, thinking it was an obligatory piece for any writer living in New York, but in many ways it is the best encapsulation of what continually draws Schaap to bars time and time again:

[I]n the days after 9/11, the Fish Bar was exactly the kind of bar I needed. No pushing, no preaching — like a family, really, but a calmer and kinder family than many of us join when we are born.

It reinforces Schaap’s thesis in the introduction: Bars are not just places to go to drink, but to drink with other people.