Last night, ABC kept with tradition and aired the Halloween classic It’s the Great Pumpkin, Charlie Brown. It had been a while since we’d seen it, so it felt right to give it another whirl, for old time’s sake. Here is a running diary of the experience. Note: all approximate timestamps are from the network broadcast.

0:30 The piano music is jaunty, but the atmosphere is funereal. Lucy and Linus shuffle through the fallen autumn leaves that stain the earth orange and brown with looming decay. Linus produces pumpkin after pumpkin from the patch, hoping to draw a smile from his implacable sister. She finally chooses one; it is, of course, enormous, almost too big to carry, like the burden of being her only sibling. Still, Linus hoists it aloft and trails her. They come upon a fence with a missing board, and Lucy sails through, oblivious that her brother and his payload cannot follow. He rolls it the long way around. But the pumpkin picks up speed and overtakes him, a booby-trap boulder finally catching its hapless Dr. Jones. They tumble together, end over end, boy and future porch decoration. At minimum his spine will need realignment, if not some full scoliosis brace that will be received unkindly by his schoolmates. 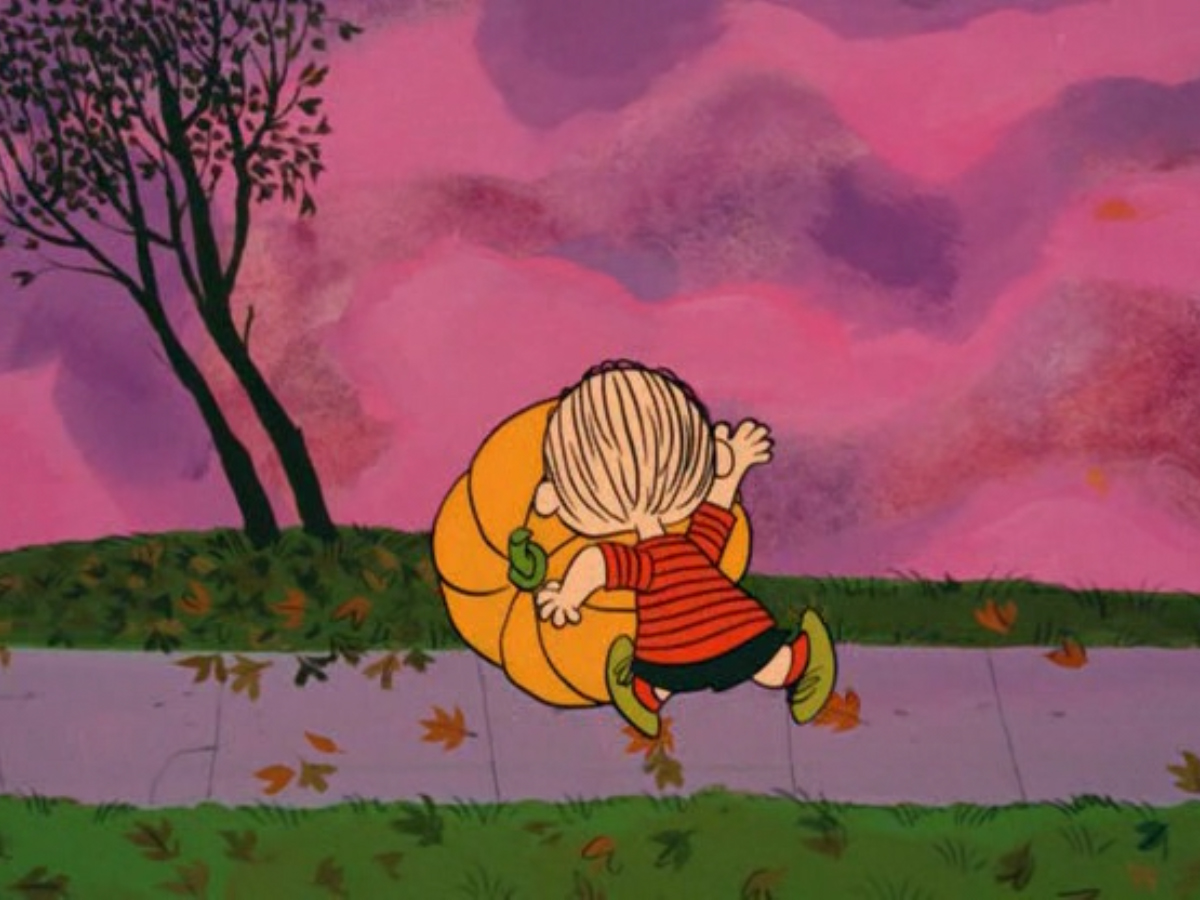 Lucy does not notice, nor does she care to notice. She hops, effortlessly, into their house. Linus, the Sisyphus of seasonal gourds, remains behind to attempt to heave the pumpkin up the stairs.

Inside, Lucy lays out some papers on the floor. Linus pushes the pumpkin into place.

Lucy materializes a butcher knife the size an adult’s shinbone. And plunges it into the pumpkin, over and over again, as Linus watches in mute horror. She reaches deep inside, removing the pumpkin’s steaming innards by the handful; had she already carved them, she would have gleefully presented the entrails before its hollow, mournful eyes. Instead she casually casts the seedy guts aside.

“Ooooooooh, you didn’t tell me you were gonna kill it!”

This is a cold open, indeed.

2:00 Opening credits. Children in ghost sheets, frolicking. Or are they actual spectres of lost souls, cursed to haunt the pumpkin patch for eternity? Nah. Just some stupid kids with bad costumes. Probably.

Charlie Brown shakes an impotent fist. He’d never strike another child, even one who just taught him that hard work can be taken from you in an instant. The effort’s never worth it.

3:00 Lucy with that damn football.

“Oh. come on. I’ll hold it steady,” promises Lucy, the Lord of Lies. “This time you can trust me. Here’s a signed document testifying I won’t pull it away.”

“It is signed! This year I’m really gonna kick that football.”

Charlie Brown does not kick the football this year.

The document was never notarized.

Lucy is a sociopath. 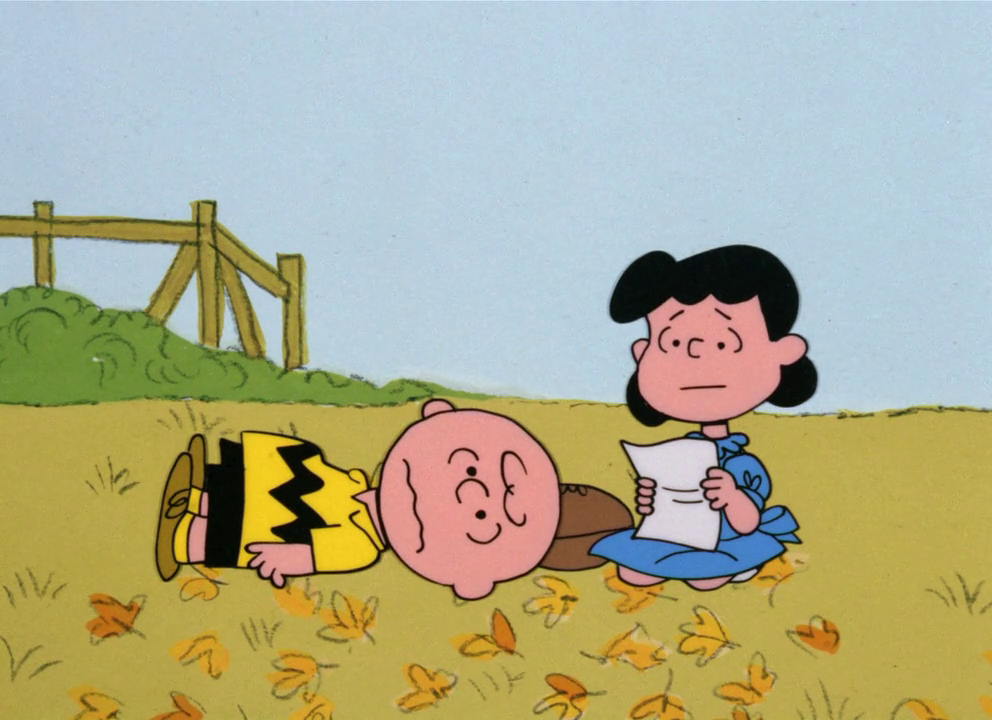 4:00 Linus writes a letter to the Great Pumpkin, his favorite, though elusive, pagan deity.

When are you going to stop believing in something that isn’t true? The voice is Lucy’s, but it could also be the nagging one inside his own head. The sharp pangs of doubt feel the same no matter the source. He strikes back at Santa Claus. The blow does not land.

Snoopy, a dog, mocks his belief.

5:00 Lucy grabs Linus by the collar and threatens him with violence if he doesn’t give up this Great Pumpkin folly. Her sisterly regime is intolerant, oppressive. Linus, still unwilling to be so easily broken, doubles down on faith:

“Everyone tells me you are a fake, but I believe in you.”

6:00 Sally would never laugh at Linus. He blushes. It feels good to have a woman in his life who isn’t mocking him or stabbing an effigy of his beloved Pumpkin. The sudden reddening heat in his cheeks is as welcome as it is unexpected. He tells her of the Great Pumpkin’s legend, invites her to join him in the patch for the annual visitation. She accepts.

“What are you trying to do to my little sister?”

Charlie Brown is not pleased. This is, after all, the cretin who jacked up his leaf pile like four minutes ago.

7:00 Lucy continues to harangue Linus, refuses to help him place his letter to the Great Pumpkin in the mailbox slot he’s much too short to reach. But he uses his magic blanket to whip the letter in. Linus takes this round.

Charlie Brown receives an invitation to a Halloween party. It’s his first-ever invitation, to anything, a cherished occasion for joy, no matter how fleeting.

“It’s obviously a mistake,” explains Lucy. “There were two lists. One to invite, one not to invite.” He must have been on the not-invite list, obviously. A snafu.

Charlie Brown is crushed. You’d think he’d be used to it by now, but each failure stings anew.

10:00 Sally makes a ghost costume. The inadvertent glimpse of her own morality frightens her.

Lucy dresses as a witch. Of course she does.

Charlie Brown’s ghost costume is riddled with holes. He is a leper-spirit, cursed with poor sewing skills.

Pigpen’s costume is filthy. We’re meant to fear that his parents, quite obviously anti-vaxxers, are willing to compromise the herd immunity in the name of their principles. They could all return from the night’s adventures with rubella.

12:00 The gang teaches young Sally how to trick-or-treat. It’s a simple con they all take to quickly.

They stop to taunt Linus on their way out.

13:00 Sally breaks off from the group after some brief trick-or-treating and returns to Linus, full of love. But she quickly draws boundaries: “If you try to hold my hand, I’ll slug you.”

Linus, oblivious to her warning, drones on about his certainty that the Great Pumpkin will choose his patch this year, showering them with toys.

They stare up at the night sky. The Great Pumpkin is not forthcoming.

[17:00 Commercial for the local news. There are pictures of dogs in Halloween costumes. “I love when they put a wig on a dog! That is, like, ingenious to me!” effuses an unseen journalist.]

17:15 “Can I have an extra piece of candy for my stupid brother? He’s waiting in a pumpkin patch, like an asshole.” This is Lucy. But we didn’t need to tell you that.

The kids receive and catalogue various treats. Charlie Brown’s inventory is despair itself, rock after rock after rock. Existence is misery. He didn’t need a pillowcase full of rough stones to teach him that lesson. It’s one he already knows bone-deep. 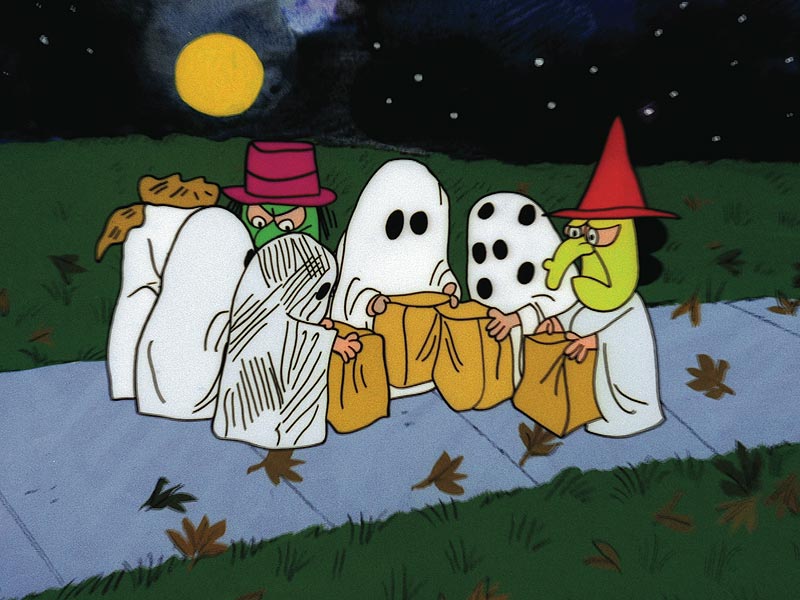 18:00 Charlie Brown explains Snoopy’s WWI-era adventures atop his “flying” dog house, which does not actually fly. Really, no one cares. There’s not much Halloween-y about the Great War. If you were to ask Lucy about it, she would declare it the world’s stupidest war, threaten to strangle you with your own aviator goggles, and then jab you in the windpipe with the webbing between her thumb and forefinger while you contemplated the validity of the original threat.

20:00 Somehow, Snoopy’s doghouse is riddled with bullet holes in a firefight. This is impossible. It is a doghouse. It is not a biplane. It does not fly. This has been established.

21:00 The kids return to the pumpkin patch after trick-or-treating to trample upon Linus’s dreams once again. Still, Sally stands by his side.

22:00 The gang arrives at the party. Charlie Brown’s now wearing a Zorro mask. “Charlie Brown, you have to model for us!” squeals a girl. Me? Did this mask actually make me desirable in some way? he wonders.

The other shoe drops quickly: They turn him around and scribble on the back of his bald head with a Sharpie, his ruined pate now the model for a jack-o’-lantern’s jagged candle-hole. His humiliation is profound. He turns the wan red of a thousand dying suns. 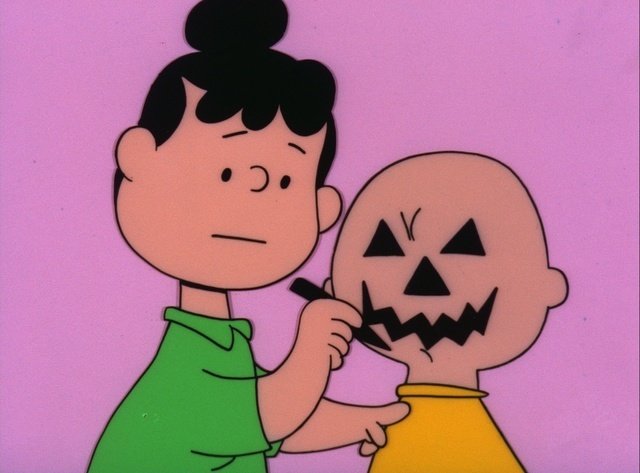 23:00 More Snoopy adventures as he comes across the farmhouse from the opening of Inglourious Basterds. Zero fucks are given. One could die beneath its floorboards for want of nurturing fucks.

24:00 Lucy bobs for an apple. Snoopy is in the tub somehow. Lucy feigns disgust at the discovery.

Schroeder, a musical Faust, bangs away at a toy piano, coaxing impossible, darkly miraculous tones from the infernal instrument. The Devil’s notes pour out from his fingers like the blood offering from a slaughtered goat above the sacrifice-font.

25:00 Sally laments how her big date night in the pumpkin patch is going. But! Linus hears the Great Pumpkin! There he is! Rising up out of the pumpkin patch! They can see his majestic silhouette against the harvest moon! 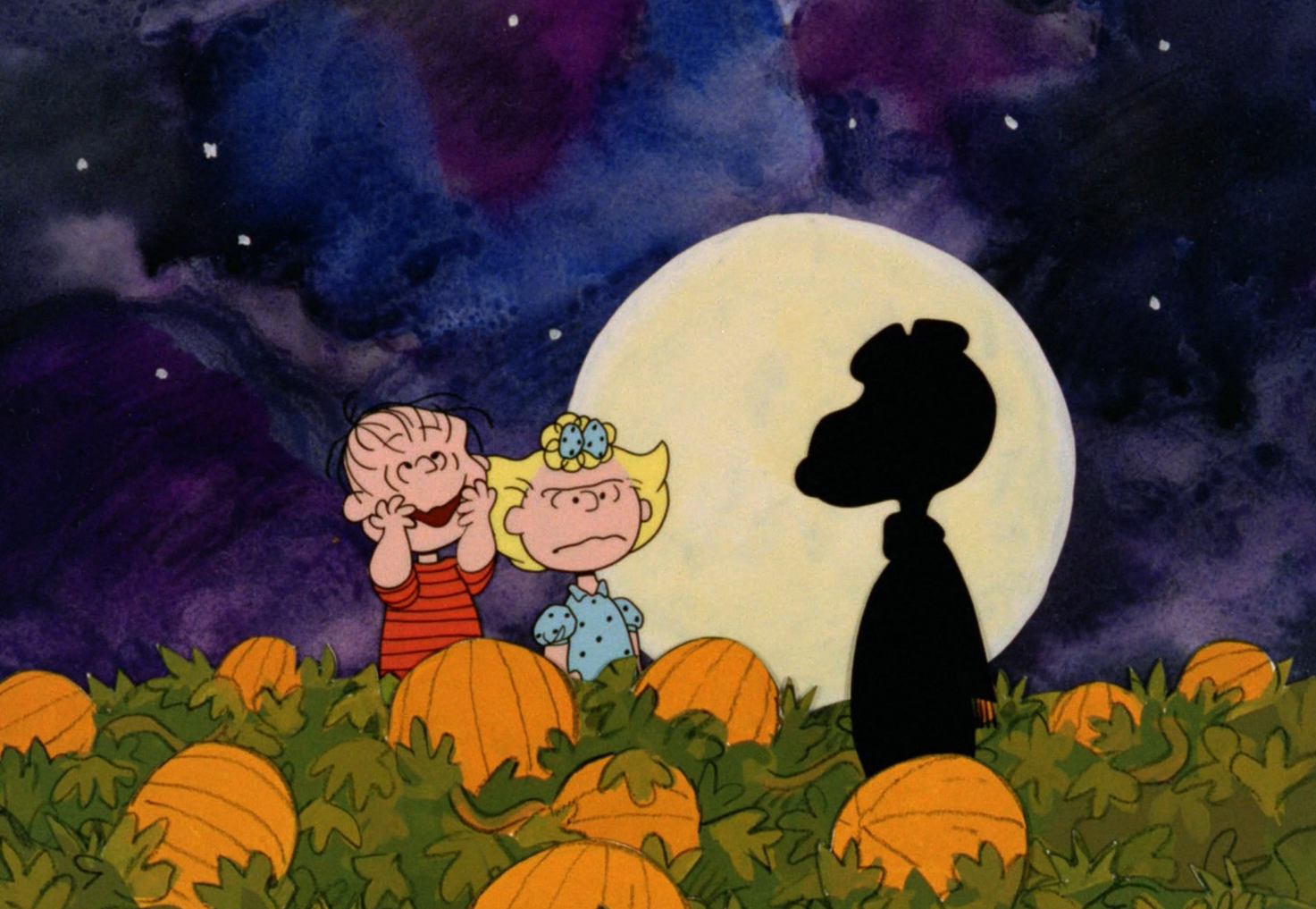 Oh. It’s just Snoopy. Did he at least leave them any toys? No. He did not.

Sally is not pleased. She calls Linus a blockhead, repeatedly, inconsolable about Linus’s deception. “You owe me restitution!” she bellows, storming off.

“You’ve heard of the fury of a woman scorned?” Linus asks Charlie Brown. “That’s nothing compared to a woman who’s been denied tricks or treats.” There’s no “Amen, brother” necessary. They both get it. Even the one who’s had the back of his head defaced by grade-school girls in the past hour.

Linus, invoking Gethsemane in the pumpkin patch, frets that his savior might pass him by.

“O Great Pumpkin, why hast thou forsaken me?” 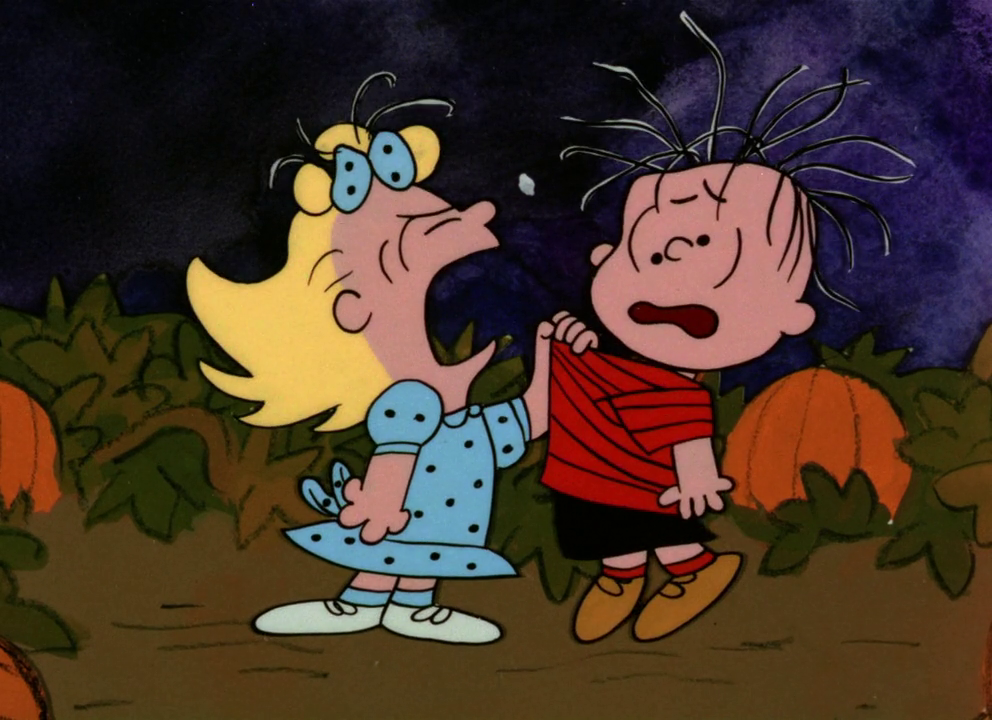 [28:00 National commercial for flavored whipped peanut butter. JIF WHIPS. There is a pumpkin spice flavor, and it is weaponizable.]

31:00 Lucy, awakened by her bedside clock, notices that Linus is not in his bed. She retrieves him from the pumpkin patch and returns him to bed. There are no threats of bodily harm as she tucks him in. This feels, however tenuously, like a real step forward in their relationship.

The location of the butcher knife is unknown.

32:00 Daylight. All Saints’ Day. Charlie Brown and Linus lean on a wall, weary heads in hands. They commiserate in parallel.

“I don’t understand it. I went trick-or-treating and all I got was a bag full of rocks,” says Charlie Brown.

“I suppose you spent all night in the pumpkin patch? And the Great Pumpkin never showed up?”

“Well, don’t take it too hard, Linus. I’ve done a lot of stupid things in my life, too.”

“STUPID? WHAT DO YOU MEAN, STUPID? Just you wait till next year, Charlie Brown! You’ll see! Next year at this same time I’ll find a pumpkin patch that is real sincere. And I’ll sit in that pumpkin patch until the Great Pumpkin appears. He’ll rise out of the pumpkin patch and he’ll fly through the air with that bag of toys! The Great Pumpkin will appear, and I’ll be waiting for him … ”

There is more. Much more. But Linus’s words become softer, and the outro music louder, as his anguished wails drift away into the crisp autumn air, falling, eventually, on the deaf ears of an overstuffed scarecrow. It, too, has been waiting for the Great Pumpkin. But the Great Pumpkin never comes.

Because the only god in these parts carries a football.

And a notarized piece of paper, because next time that’s what it’s going to take to get poor Charlie Brown to believe again, right before She yanks away all his hopes.