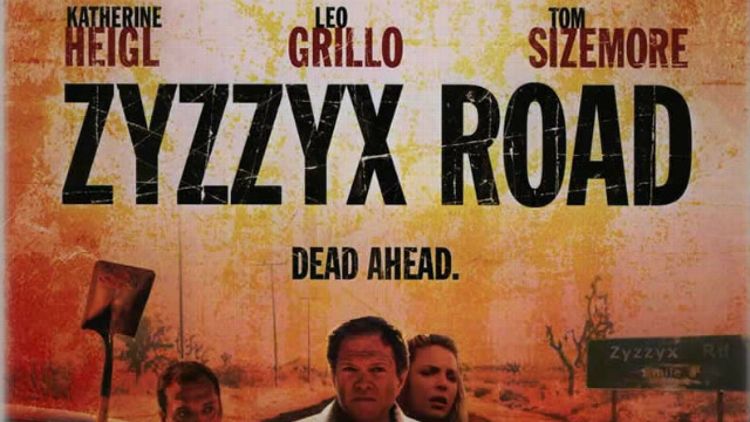 In 2006, the top-grossing film at the box office was Pirates of the Caribbean: Dead Man’s Chest, which played at 4,133 theaters across the United States during its five-month run and earned $423 million. The lowest-grossing film at the box office that year was Zyzzyx Road (pronounced zizz-iks), which played at a single theater in Dallas for one week and earned $30, or .000000071 percent of Pirates’ take. (Actually, it only took home $20 after actor and co-producer Leo Grillo refunded the tickets purchased by Zyzzyx Road’s makeup artist and one of her friends.) To date, Zyzzyx Road is the lowest-grossing film to ever appear on an American movie screen. And until Tuesday, it wasn’t available on DVD in the United States.

In 2007, Entertainment Weekly’s Rob Brunner wrote the definitive story about the circumstances surrounding Zyzzyx Road’s unlikely notoriety. Brunner points out that, while the movie did set a new low for recorded theatrical earnings, that record, much like Michael Strahan’s single-season sack mark (nice one, Favre!), is highly dubious. In late February 2006, Grillo rented the Highland Park Village theater in Dallas for $1,000 because, as long as he gave his low-budget film a brief theatrical run, he could pay his actors less. Without any premiere hoopla or advertising of any kind, Zyzzyx Road showed at the Highland Park Village once a day, at noon, for seven days. It’s no wonder that only six people saw it.

But because one of the stars of Zyzzyx Road was a 28-year-old blonde named Katherine Heigl, who had just begun work on a television show called Grey’s Anatomy, Zyzzyx Road didn’t sink into oblivion like most low-budget fare. For a while, Grillo and producer/director John Penney thought they would cash in on Heigl’s rising fame and make some of their $1.25 million investment back. While Brunner’s article claims that a domestic DVD release was “a near certainty,” it took six years for American viewers to catch up with all those lucky so-and-sos living in Portugal, Indonesia, and other countries where the film’s foreign rights were sold.

On Tuesday I looked all over the place for a hard copy of the Zyzzyx Road DVD because I wanted to read the back of the DVD case (and also to confirm that Heigl’s name was misspelled on the front cover). No dice; I had to watch it on streaming video. Still, I had some reasons for optimism. First, there’s not always a link between a film’s popularity and its quality. Although plenty of atrocious movies earn dump trucks full of money, plenty of great movies don’t make much money at all. Take the two best films by writer-director Mike Judge: Office Space was a notoriously low-performing theatrical hit in 1999, and Idiocracy was practically locked out of theaters in 2006, but those are now recognized as two of the best American comedies of the last 20 years.

That description is still true today; most direct-to-video thrillers implicitly guarantee a passport to Tittysburg.  And although Katherine Heigl has taken a lot of roles that seem to typecast her as America’s Uptight Sweetheart, a lot of those parts feature one form of  “hilarious” sexual humiliation or another, whether it’s being pleasured via remote control by an unsuspecting kid during an important dinner with Leonidas and Art Mullen in The Ugly Truth, getting handcuffed to a shower-curtain rod in One for the Money, or enduring any number of unspeakable horrors once Seth Rogen mistakenly raw-dogs her in the beginning of Knocked Up. But even though Heigl first appears onscreen in Zyzzyx Road sucking a cinnamon-flavored ring pop, this movie isn’t the place to track down one of those poorly lit, poorly scored nude scenes that crouch in the back closets of many actresses’ careers.

So sorry, guys; there’s no nudity in Zyzzyx Road. But there are scores of SPOILERS in the recap ahead.

Zyzzyx Road’s opening credits show glimpses of a freeway, a roulette wheel, a shovel, some fake IDs, and (perhaps in a nod to the most profitable low-budget film of all time) a teddy bear face-down on a couch like it’s about to be punished by the Blair Witch. The first words in the film come from Grant (Grillo), a middle-aged businessman who’s droning on in nice, detached film noir-y fashion about 401(k) plans and the difficulties of planning for your future. We soon learn that his real audience is his “teenage” (?) passenger, Marisa (Heigl). After speculating about Britney Spears’s relationship with Justin Timberlake, Marisa reminisces about her first crush (“I couldn’t walk for, like, two weeks, I played with myself so much”) and then brats it up as only a 28-year-old pretending to be a 17-year-old can.

Grant and Marisa are driving into the darkness of the California desert, where they have a bloody payload to bury: Marisa’s ex-something-or-other Joey (Tom Sizemore), who’s been wrapped in a blanket and thrown into the trunk after Grant knocked him unconscious with one of Marisa’s vibrators.

Once Joey — who, remember, was recently brained by a sex toy as big as a crowbar — revives and escapes from the trunk, he spends the rest of the night menacing Marisa and Grant. The next morning, Grant finds Joey, who lures him into an abandoned mine shaft and tries to convince Grant that Marisa is not who she appears to be (“That thing out there? The one that’s calling itself Marisa? I gotta tell you this — it’s not human”) At this point in Zzyzyx Road, I started to hope against hope that Katherine Heigl’s last screen role before she struck it rich was that of a shape-shifting jail-bait skank from outer space that must be killed with a 20th-level Soulknife.

Alas. The second half of Zyzzyx Road plays like a cautionary tale about the dangers of brain trauma and the perils of stepping out on your wife and family. (SPOILERS!!!!) See, Joey wasn’t the only one to suffer a head injury earlier that day. Grant got quite a bump on his noggin as well, and it’s caused him to hear voices and conjure up the image of Joey, whom he actually dumped in a motel closet before hitting the road. Marisa looks like a 25-year-old teenager because that’s what he thinks she is in his jarred head; she’s actually a classier gal (maybe a moderate- to high-priced escort?) who fell in with a cheatin’ husband and is now running for her life as he debates with the air about how to kill her. Even a friendly meth-maker can’t stop Grant’s staggering rampage. Thankfully for Marisa, a passing truck eventually does.

As schlubby Grant, Grillo is a decent, understated performer, reminiscent at times of Joel Murray, star of this year’s truly loony God Bless America. He certainly holds his own in scenes with Sizemore and Heigl. But there’s a reason why Grillo is more famous as an animal-rights activist than he is as an actor. His real-life humanitarian deeds probably explain the scene in which Grant confronts a menacing pit bull and then shows that it’s a fine dog once you just calm the fuck down and act nicely toward it.

First-time director Penney mixes up an awful lot of filtered footage, some flashbacks, double-backs, and leaps in logic for a movie that’s only 76 minutes long. He really pulled out all the stops here. There are better movies out there, and there are much, much worse ones; Zyzzyx Road does not deserve to be mentioned alongside an act of cinema treason like That’s My Boy. As a B-movie, it earns a B- or so. (Then again, my finely honed ability to grade sophomoric work is a bit rusty.) In any case, the film’s secret is out; its mystery has vanished. How long before it fades back into the strangely lit night?

In 26 days, Addison Engelking returns to his other job as a high school English teacher in Roseville (Minnesota). Not that he’s counting or anything.