Is Dawn Richard’s Goldenheart Already the Album of the Year? 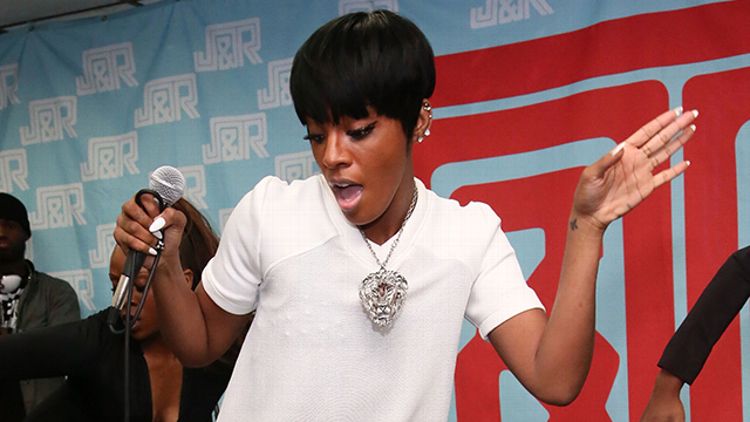 “Steve, you guys in the press are incorrigible.” When Barack Obama said that on 60 Minutes last Sunday, he was referring to the media jump-starting coverage of the 2016 presidential election not even a week after his inauguration. And he was directing it at Steve Kroft, not me. Still, I take this statement to heart, because I happen to be one of those incorrigible early-early media speculators. Only I’m not trying to guess presidential candidates, but rather what will be critical consensus pick for the best album of 2013.

Call it a byproduct of creating arbitrary lists of albums released during an arbitrary period of time for more than half of my life, going back to my junior Christgau high school newspaper days. You do this long enough, and your brain automatically resets every January and starts slotting everything it hears into “list consideration” and “no thanks” piles. I don’t look at this as a virtue; it’s a sickness, but one I have learned to manage. Stray minutes in the shower or at the grocery store have already accumulated into hours of time spent pondering whether A$AP Rocky’s Long.Live.A$AP deserves to be slotted above Parquet Courts’ Light Up Gold, because while I probably prefer Light Up Gold’s potted-up hybrid of The Fall and The Hold Steady’s Almost Killed Me, the immaculately vapid beauty of the trend-whoring (and seriously addictive) Long.Live.A$AP already seems like the most 2013 thing I’ll hear all year.

This is seriously dumb, I know. But now I’d like to indulge in an even more foolhardy game: guessing what other critics are going to declare the best album of 2013 a full 10 and a half months and approximately 10,000 unreleased (or even unrecorded) records from now. Actually, I feel more confident about this guess than I do about my own picks.

One of the most critically acclaimed LPs of this very young year is Dawn Richard’s Goldenheart; NPR, Spin, Pitchfork, and The Guardian have already lined up to declare Richard — a former reality-show contestant and member of the ill-fated Diddy-engineered prefab group Danity Kane — one of the best and most indelible fresh talents in pop and R&B. Goldenheart is a highly idiosyncratic mix of heartbroken slow jams, chart-friendly Europop, and full-bore prog-rock fantasy; references to outer space, medieval battles — one of the songs is called “Warfaire,” which is how the people and dragons on Game of Thrones spell “warfare” — and grandly mythical, larger-than-life rulers of imaginary worlds. (The Atlantic dubbed Goldenheart “D&D&R&B,” short for “Dungeons & Dragons R&B.”)

But it is Richard’s musical, rather than lyrical, reference points that make the most lasting impression. The album’s catchiest track, “In Your Eyes,” borrows liberally from Peter Gabriel’s boombox-hoisting classic of the same name; the art-school deconstructions of classic ’60s soul that distinguish Gabriel’s 1986 album So, which spawned “In Your Eyes” as well as the avant-pop standard “Sledgehammer,” are an obvious influence on Richard. But Goldenheart contains several other hallmarks of ’70s prog and ’80s soft-rock — the album cover is interchangeable with any number of mid-’70s Roxy Music records; Richard’s partnership with producer Druski has been likened to David Bowie’s relationship with Brian Eno during his “Berlin” period; and Spin compared parts of Goldenheart to part-time Genesis front man Phil Collins’s seminal yuppie–serial killer favorite, No Jacket Required.

Richard’s career narrative — recovering cog in a pop-star machine–cum–visionary auteur — has obvious appeal for music writers, but as an album Goldenheart has all the trappings of the most appetizing critic bait currently on the market. Speaking in somewhat reductive terms, Goldenheart resembles two of the most critically adored albums of recent years: Frank Ocean’s Channel Orange and Janelle Monae’s The ArchAndroid. Like those records, Goldenheart is classified as R&B even though it pushes the traditional boundaries of the genre so far that it exists in its own creative space. (Pitchfork suggested that Richard’s virtuosic vocal undulations amid the epic, Narnia-esque trip-hop of “Return of the Queen” were influenced by Bollywood, though my ears also detect Thom Yorke’s operatic flourishes on OK Computer.) Like Ocean’s pharma-delic Channel Orange, Goldenheart is so personal and introspective that it verges on the off-puttingly insular at times; Richard is slightly more concerned with hooks than Ocean is, but the tempo and mood of her songs — which tend toward middling and downbeat — don’t exactly cater to short attention spans. But, like The ArchAndroid, Goldenheart is obviously such an ambitious, singular work that not getting it by the first, second, or even 10th listen only invites further investigation.

Since this is the year when our conversations about race and pop culture are supposed to change forever, it’s worth touching briefly on how black artists influenced by “white” music (or musical sensibilities commonly associated with music made by white artists) have become the toast of critics in recent years. Writing last month in Slate’s critical roundtable The Music Club, Jody Rosen expressed self-described suspicion over the embrace of artists like Ocean and the similarly unclassifiable wunderkind Miguel — both of whom Rosen himself endorsed enthusiastically — in certain critical circles where “straighter” or more mainstream forms of R&B are often ignored. Rosen suggested Channel Orange was “R&B for people who don’t really like R&B.” In a follow-up post, journalist and author Jason King went further, writing that “hipsters’ ‘suspicious’ newfound love for R&B” is based partly on “the implicitly racist conceit that suggests that R&B only becomes compelling when it takes on an indie-rock aesthetic.”

A couple of things: I’d argue that critics generally favor the weird, the novel, and the experimental no matter what genre — whether it’s R&B, country, rap, metal, or whatever — while generally undervaluing craftsmanship and fidelity to commercial dictates. (There’s a critical bias against rock that doesn’t have an indie-rock aesthetic, in other words.) Also: It’s highly problematic, if not dangerous, to speculate on why people you’ve never met like or don’t like something, simply because you’ve decided to group a bunch of them together in your mind into a demographic based on skin color, economic status, geographic location, proximity to cool coffee shops, and/or density of facial hair. It’s even more ill-advised to make blanket judgments on the character of those anonymous hordes based on your perception of their tastes or record collections.

Getting back to Goldenheart, it’s clear how futile it sometimes is for critics to impose orderly genre classifications on artists determined to not be pinned down. Goldenheart might very well become the latest big-ideas record to influence the course of contemporary R&B, but Richard seems concerned only with the shape and sound of her own rapidly evolving music. She is her own genre.

I wouldn’t say Richard has an “indie-rock aesthetic” — though, since Goldenheart is self-released, she is way more indie-rock in the true sense of the term than most indie-rock artists — but she’s certainly drawing from a well that white rock bands have drawn from time and time again. And she’s doing it at a time when indie-rock artists are drawing more from contemporary R&B and hip-hop than at any time arguably since the height of The Clash and Talking Heads. (See this recent Dirty Projectors cover of Usher’s “Climax,” among many other examples.) As with so many things about pop music these days, it’s getting harder and harder to see where the old lines of demarcation lie. With records like Goldenheart, it’s almost as if those lines are no longer there.