I Would Like to Help You Get Your Show Canceled 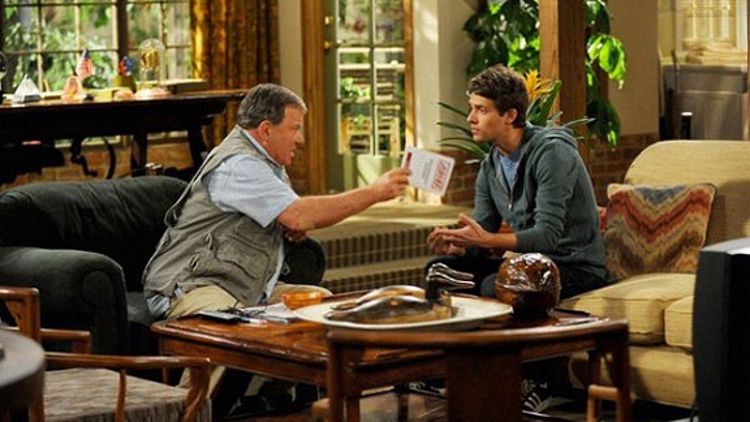 Only 7.3 percent of all television shows make it to a second season.

I actually have no idea if that’s true, because I don’t know anything about successful television shows. The only shows I’ve worked on have been canceled.

Two years ago, at a friend’s recommendation, I created a Twitter feed called “Shit My Dad Says” that, with the help of a number of people, I turned into a best-selling book of the same name. My dad called me “the luckiest asshole in a sea of lucky assholes.” I decided to press that luck and co-created a television show based on Shit My Dad Says that aired on CBS. I spent a year as a writer on the show, which is perhaps a fact I should be trying to have removed from my IMDb profile rather than sharing in this essay. Here are some actual words and phrases that appeared in reviews for the show: “unwatchable,” “cringe-worthy,” “possibly the end of television,” and my favorite, “would rather watch shit coming out of a rhino’s asshole.” After 18 episodes we were pulled off the schedule and canceled, but it was hard for me to be upset. I had just launched an entire career off a Twitter feed. It’d be like winning the lottery and getting pissed off because they only give you the money in increments of $50,000 a year. Even though the show failed, I was in love with the job. I had spent the past 10 years trying to break into television writing while simultaneously waiting tables in Los Angeles. So even though I had far from “made it,” the idea that I might never have to hear a restaurant manager tell me things like, “Al from Home Improvement is very unhappy with your service,” seemed miraculous.

The next year I landed a job as a mid-level writer on another CBS show, How to Be a Gentleman. I was ecstatic, and hopeful that this show would gel and become a hit. Instead, we were pulled off the air after two episodes. It felt as if my wife had turned to me the instant we’d finished having sex and said, “I want to have an abortion.”

The reason both shows were canceled so quickly is something we in Hollywood call “shitty ratings.” When networks roll out a new show, they usually slot it after an existing, popular show. Their hope is that viewers will watch the show they already love, then keep the channel on and give the show that follows a chance. Coincidentally, both Shit My Dad Says and How to Be a Gentleman followed The Big Bang Theory, which is the second-highest rated show on television. This placement was a huge advantage, but it came with certain expectations for how much of that audience we were expected to retain. In our first airing of How to Be a Gentleman, we held 55 percent of our lead-in. To put that figure in perspective, let’s say David Ortiz is batting fourth for the Boston Red Sox and he’s hitting .320 and the fans love him. Then the Red Sox bring up a kid from the minors and have him bat third, in front of Big Papi, and he hits .170, and then in the postgame press conference drops the N-word. That’s approximately what 55 percent retention signifies to CBS.

After that first week and our pitiful 55 percent retention, the entire writing staff felt certain we were getting canceled. We just weren’t sure when or how. The day after our second week’s numbers held steady, the 12 of us sat around the large boardroom table in the writers’ room waiting for the moment when the hammer would drop. It was tough to stay focused, and people were not exactly excited to be at work.

“Where does it go in the second act?” one of the senior writers asked, as we were trying to outline the next episode.

“What if in the second act, he turns to the girl he’s with and he’s like, ‘We’re canceled, who gives a fuck?’” pitched a writer sitting next to me.

And then an hour later, during lunch, as we sat around eating burritos, we heard the door to the elevator 15 feet down the hall from us ding. With the fear of cancellation causing us to be hypersensitive to any sounds of human beings entering our offices who weren’t us, we poked our heads out of the writers’ room and saw four neatly groomed studio executives in suits and ties walk out. Generally, studio executives try incredibly hard to be jovial when addressing writers. They understand that we don’t tend to enjoy their company, because spending time with them means we’re going to get “notes,” and notes are like Yankee fans; not all of them are bad, but all of them are annoying. So in an effort to combat that spirit of suffocation, they go above and beyond to give off an impression that says: “Hey, we’re just like you guys! We have human emotions and tell jokes, too! We have offspring! Would you like to discuss the comical situations that arise when raising offspring?!” But today the looks on their faces when they walked out of this elevator did not bear the forced jocundity I was accustomed to. They looked somber. It was time to put the show down.

They marched down the hallway sparsely decorated with generic photos of the Las Vegas strip that were haphazardly thrown up by someone who probably figured we’d be canceled, and into the head writer’s office, which was four doors down from the writers’ room. Now, there are two big perks that come with being the head writer on a television show. The first is that you make more money in one week than most Americans make in a year, and the second is that you have a bathroom in your office. Everyone else on the floor has to use the communal restroom, but the head writer has a private toilet. That’s an awesome perk 99.9 percent of the time. Unfortunately, that .1 percent of the time when it’s not awesome is when studio executives are coming to tell you your show is canceled, push past your secretary, and enter your office only to discover that you’re defecating in your private bathroom. Apparently this is what happened to the head writer of our show. After pulling up his drawers, hopefully trying to diffuse the smell of ass, and receiving the news, the head writer, joined by the creator and star of the show, David Hornsby, came in to break the news to the writing staff.

What you may not know when you’re watching your favorite TV show is that many of the writers on that show most likely worked, at some point in their careers, on a show you absolutely hated, a show that made you question the intelligence of the network that was airing it, a show that felt as soulless and forced as a Kardashian wedding. Lots of talented people work on shows that just don’t work, and our show was no exception. David Hornsby, who created the show, is one of the more talented people I’ve had the pleasure of working with in my short career. He, along with our head writer, two genuinely decent human beings, gave the writing staff a heartfelt thanks for the five months of work we had put in to make, essentially, 66 minutes of TV. Then the 12 of us scurried to our tiny offices to clean them out.

Most of the time, losing a job is a really unpleasant experience that leaves people feeling angry, unappreciated, and hard done by. (One exception; When I was 20, I was fired from my job as a cook at a Hooters in Pacific Beach, San Diego, for trying to see if I could hurl a chicken wing into the ocean from our balcony. That was sort of fun.) Even though our show was canceled, when the 12 of us walked out of our offices for the last time that day there wasn’t one person among us who didn’t feel like he or she had the best job in the world. TV writers sit around a room 70 hours a week trying to make our friends laugh, have access to more bottled water than entire African countries, and get paid handsomely for our efforts.

Do I hope that someday I’ll be on a show that combines a great cast, a simple premise, and clever screenwriting, and actually gets renewed for another season? Of course. But until then, I will be grateful for every job I get, and do my best to make the shows I work on more entertaining than shit coming out of a Rhino’s asshole. Unfortunately, I have yet to do that. So instead I’ll just say, if you’re looking to get your show canceled, I’m usually free by mid-October.

Justin Halpern is the author of the no. 1 New York Times best-seller Sh*t My Dad Says. He is also partially responsible for the television show of the same name, which you probably hated. His second book, I Suck At Girls (on sale from It Books on May 15, 2012), is a trip through Halpern’s complete failures with the opposite sex. And yes, his dad is in it. He’s not stupid. Follow him on Twitter at @justin_halpern