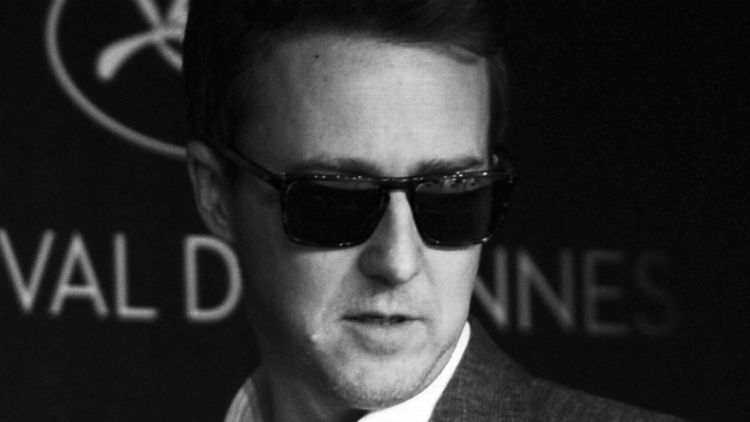 Look over here. But don’t look close or for too long. There is wreckage and confusion and sadness in the filmography of Edward Norton. But it wasn’t always this way.

Think back to a time when Stuttering Aaron Stampler was climbing over the witness stand to snap a prosecutor’s neck. Think back to Lester “Worm” Murphy getting his face rearranged by a room full of angry sheriffs for dealing from the bottom of the deck. Think back to the bottom of Derek Vinyard’s heel before it destroyed someone’s dental plan. Think of The Narrator unleashing his inner Tyler Durden while ruining Jared Leto’s pretty face. Or think of Monty Brogan screaming “Fuck you” at the whole of New York City, America, and himself. Those violent, strange, exciting people were all Edward Norton. You remember Ed Norton, right? Actor? White guy? Bookishly handsome? Great at playing — against type — sociopaths, washouts, and drug dealers? The scabs of society? You’re forgiven if you can’t recall the man many once considered the next De Niro or Hoffman. That’s because, in the past decade or so, he has been very bad at making movies. Today, Norton appears as Retired Col. Eric Byer, a shadowy government operative in The Bourne Legacy, his highest-profile role in more than four years. Next week, he turns 43. Forty-three! The boyish, boiling-with-rage, Yale-trained Brando wannabe is aging.

So what happened to America’s favorite avatar of repressed white male fury? After receiving Oscar nominations for two of his first five performances (seriously, look at the bundle of hardware he acquired in the first half decade of his career), Norton has made, well, some bad choices. Out with the raging young man of Fight Club and in with the conflicted milquetoast of The Painted Veil (you catch that one?), the nebbishy hero of Red Dragon (you wish you didn’t), and the screwball moron of Death to Smoochy (you can’t unsee that). But worse than that, Norton has gotten more serious. Not about his craft, necessarily, but about the world. In recent years, he produced a documentary about Barack Obama’s rise during the 2008 presidential election and another examining, among other things, a bull semen collector. His next production is a miniseries about explorers Lewis and Clark. Fun. This year is meant to be Norton’s surreptitious comeback, with smaller roles in Wes Anderson’s delightful Moonrise Kingdom, the heavy opposite Jeremy Renner’s Bourne clone, and a truly bizarre if kinda-great, blink-and-you’ll-miss-it cameo in Sacha Baron Cohen’s The Dictator. But they are not enough, nor are they savvy for an actor who once seemed to have Legend tatted beside that chemical burn on his hand.

So we are gathered here to fix a once-thrilling career — in five easy steps.

Norton is tremendously talented at playing seedy assholes. It’s mostly because he’s got that Ivy League–certified, aw-shucks, pale-faced intellectual countenance. People want to trust him, and when the evil emerges it’s always a shot in the chest. He hasn’t played a shifty hustler from society’s outskirts since 2005’s little-seen Down in the Valley. Before that, he had a nifty gig as the traitorous Steve in 2003’s The Italian Job and his iconic role as tragic busted drug dealer Monty in Spike Lee’s 25th Hour. Nobody takes a punch like Norton, and all of these loathsome-on-paper, lovable-onscreen characters get socked in the face in their films. It’s been too long since Norton was a scheming jerk, but it’s been even longer since he got cold-cocked.

Solution: Flyweight. Norton plays Mackey “Motormouth” Moriarty, a quick-lipped, quicker-wristed boxer on the way-downside of his career, throwing fights for mob pay. Until he realizes his hook is meaner than it has any right to be on this side of 40. Suddenly, the wins start piling up, just like the money and the mob threats. Warrior helmer (and onetime Norton collaborator on Pride and Glory) Gavin O’Connor directs a script from Ron Shelton. Jessica Paré co-stars as Trixie, a retired ring girl turned romantic interest. A comeback story within a comeback story is born.

Otherwise known as Colin Farrell–ing. As Grantland’s Chris Ryan pointed out last week, attempting to trick a nation into thinking you’re a down-for-whatever second banana is one of the most cynical acts a secret leading man can perpetrate. Sure, it’ll afford you a Horrible Bosses boost. But now that we can’t mind-wipe the sins of Total Recall 2.0, it’s clear that shuffling between big-boy-above-the-title duty and Was that Ed Norton? chicanery is a lousy long-term plan. Norton is a big deal — a weighty performer who can dominate the screen. He deserves to take big shots.

Solution: The Epic of Gilgamesh. Ridley Scott directs an adaptation of this Sumerian epic poem starring Norton as Enkidu, a wild man created by the sky god called Enki to rid Gilgamesh of his arrogance. Gerard Butler, of course, will portray Gilgamesh, in a floor-length beard and toga. Sky gods! Warriors! Epic poems! Tell me you wouldn’t watch these two destroying mythical monsters on a quest for immortality.

So, you’ve seen Fight Club. You’ve memorized the lines. You’ve punched the punches. You’ve lamented the capitalistic impulses of a venal and broken society and subsequently destroyed major metropolises under the spell of your split personality. It happens. These gifts and others were brought to you by Fincher and Norton (and some bro named Brad) in what may wind up the high-water mark of either or both of their careers. That can change with a simple reunion, and we have just the idea.

Solution: 20,000 Leagues Under the Sea. Fincher has been itching to remake the Jules Verne classic for years. It’s been more than six months since word of the Andrew Kevin Walker–penned adaptation, but is there a better Captain Nemo alive than Norton? Peevish, seething with vengeance, and more than a little batshit, Nemo is the embodiment of everything Norton honed in those early years. Get Chris Hemsworth in there as the strapping young Ned Land, with sea monster character effects by ILM and the Jim Henson Company’s Creature Shop and you’re looking at a summer windfall. Make it so.

4. Put Away the Typewriter

Norton’s name is mud in some Hollywood circles thanks to his rumored script-meddling on Louis Leterrier’s not-bad, not-good 2008 The Incredible Hulk reboot. His attitude issues and insistence on story elements reportedly got him replaced by (the excellent) Mark Ruffalo in this year’s The Avengers. That’s the year’s biggest movie, and also one of the most well-liked — bad break for Norton. But the intensity of Norton’s on-set (and editing-room) opinions are legion, too. Just ask since-blackballed American History X director Tony Kaye. He thinks he knows how these movies ought to be made. It’s possible he doesn’t.

Solution: Sinatra. A knee-buckling curveball. OK, so when you think Ol’ Blue Eyes, you don’t think pasty Ed Norton. But this long-rumored Martin Scorsese project could force Norton to recapture all the machismo, all the live-wire swagger, all the devilish cool he once wielded so effortlessly. And we know he can sing. (Kinda.) With Scorsese in charge, all that meddling melts away. No one challenges Marty.

Norton is engaged to producer Shauna Robertson, a woman who helped bring Anchorman, Superbad, and Forgetting Sarah Marshall into the world. According to Judd Apatow, “She is the rare woman who always wants to take the joke farther than any man wants to go. All nudity in my films is a result of Shauna pushing me and calling me a wimp.” By all accounts, Robertson is a magical woman. But we’re not talking about love here, we’re talking about Hollywood supremacy. And you know what gets you the throne? Scandal. Hot-actress-cheating scandal.

And look, we know Ed Norton likes sly-eyed actresses with a side order of crazy. See? There’s no shame there. Kristen Stewart ticks all of the boxes. Her vampire-baby relationship is in shambles. She’s got actorly street cred. She’s an attractive human. And she’s bankable. Sorry, Shauna.

Solution: Baby Doll. A remake of Elia Kazan’s steamy 1956 drama about two Southern cotton gin rivals battling over a 19-year-old virgin. Norton is the slimy Sicilian Silva Vaccaro (Eli Wallach in the original), while John C. Reilly takes on cuckolded Archie Lee Meighan (originally Karl Malden). Stewart, of course, is the titular Baby Doll. Adrian Lyne directs from the original Tennessee Williams screenplay. On-set romance heats up. Us Weekly gets a tip. Norton-Stewart hit the cover. They’re both nominated for Oscars. And, finally, Norton’s asking price goes from “Who?” to “How much?” Thank us later, Ed.