How ‘Housebound’ Does Horror Comedy Right 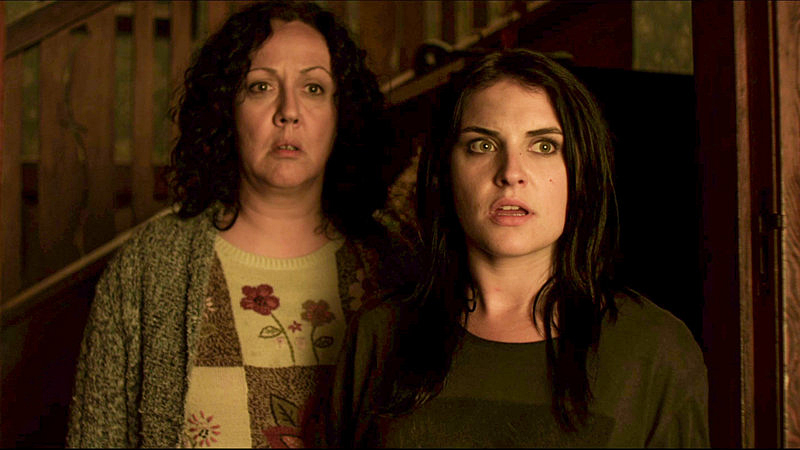 Horror movies talk to themselves. Each horror film, knowingly or not, is like an essay on those that came before it. Audiences watch these movies with a set of expectations. Horror filmmakers know this. The degree to which those expectations are subverted is usually the difference between what we think of as “smart” horror and traditional, mainstream scream fare. For instance, The Cabin in the Woods is considered a “smart” horror film because of the way it toys with genre conventions — it has fun with them — even if it never has any ideas of its own. Cabin in the Woods implies that playing it straight is beneath the intelligence of the filmmakers. But even playing things straight is itself a kind of choice.

Early on in Gerard Johnstone’s debut film, Housebound (released in 2014, and now available on demand, on iTunes), a talk radio DJ drops the term “cognitive bias.” He describes it as a state “where the brain deviates from logical thought into fallacy.”  In some ways, Housebound is about the idea of genre as a form of cognitive bias. When you see or hear the cues of horror films, you respond accordingly. This is how jump scares happen.

I saw Housebound as part of a double feature, paired with the action-horror-comedy hybrid The Guest, at the Philadelphia Film Festival. A friend, who had already seen both films, told me I was “basically spending the night in 1986.” Which I was, in a sense, except neither film has much time for the trappings of ’80s films.

Adam Wingard and Simon Barrett’s The Guest is a super-lean, 99-minute sprint of a movie. It has jokes and scares, but it’s not a horror comedy as we traditionally understand them. There are no knowing gags about its own plot, nor is there any seismic tonal shift in the final act (I’m looking at you, Scream franchise).

Downton Abbey’s Dan Stevens is David Collins, the titular guest — a stranger from out of town who may be more than what he seems. Stevens plays the role like Tom Cruise playing a Terminator. You see him turn his personality on and off mid-conversation. The Guest even jokingly hints at a connection between Stevens and Cruise: a climactic moment plays to a remix of Annie’s “Anthonio,” recalling “Take My Breath Away” from Top Gun.

The Guest’s soundtrack, composed of goth and ’80s-throwback synth, is actually its most audacious feature. The most obvious comparison would be the lush synths of Drive, but The Guest’s music has none of that film’s heart-on-sleeve, showoff quality. The characters in The Guest actually listen to this music, most of which comes from a mix that Anna (played by Maika Monroe) gives to David. The music unites the audience’s perspective with Anna’s in a more subtle way than the usual horror-film-perspective tricks do. It also lets a song like Clan of Xymox’s “A Day” become the propulsive action soundtrack it always should have been.

The ’80s influence runs deep in the film, and the music has a lot to do with that. But don’t think of The Guest as a slavish throwback, the way that The House of the Devil or Beyond the Black Rainbow were. The Guest has metabolized its reference points and feels no need to hold them up as signposts. Wingard and Barrett don’t put the Easter eggs in front of the laughs and the scares.

Housebound follows a different lineage of ’80s(ish) horror comedies. It’s a throwback to the early films of Robert Zemeckis, Peter Jackson, Sam Raimi, and Gore Verbinski — mousetraps of emotional manipulation and technique. These were visual stylists who, at the beginning of their careers, were equal parts funny, scary, playful, and technically daring.

As these filmmakers became bigger deals, they lost much of that early charm. After all, you don’t need to be as inventive when you have no budget restrictions. Housebound’s director, Johnstone, is deeply influenced by these directors, but not their puzzle box structures or their plot as excuse for the same. There’s an element of playfulness in Housebound.

Meth-head Kylie (Morgana O’Reilly) gets busted for trying to rob an ATM and gets sentenced to house arrest in her talkative, provincial, old-lady racist mother Miriam’s house. Miriam thinks the house is haunted, as does Kylie’s paranormal-researching parole officer, Amos. The scenario perfectly answers the usual “Why don’t they just leave?” question that dogs most haunted-house tales. She can’t! House arrest!

“No spoilers” culture can bring everything to the level of a Lost recap without context. The surprises in Housebound, however, actually come from how you can never quite figure out where the story is going or how it got there. This is kind of a marvelous sensation when you consider that you are always watching the same set of characters, trapped in the same story, in a single location.

At various points, Housebound is about a haunted house, ghost hunters, a murder mystery, possession, asylum horror, creepy neighbors, paranoid psychosis, and home invasion. Or at least … it plays around with the tools  you find in those kinds of movies. Johnstone understands that if you give an audience an ominous shot of a looming house, it is going to expect certain things to happen inside that house. Housebound never falls in line with that cognitive bias, and it plays all the notes of expectation without ever derailing from this story and this tone. It is unpredictable and exciting because it is impossible to second-guess, and it loses nothing on the second viewing.

What sets Johnstone’s film apart from the usual unfunny horror comedy is how the best moments rest on Kylie’s face, whether she’s incredulous or terrified. While there are a lot of really amazing shots in the film, nothing eclipses O’Reilly’s performance. If Johnstone becomes yet another comedy horror stylist that hits it huge and gets boring, it will make this film all the more precious.

L.A. Haunts: Taking On the 'Alone' Experience (the Horror Attraction, Not the Lifestyle Choice)