Honey, I Shrunk the Hero: ‘Ant-Man’ and a Brief History of Tiny Action at the Movies 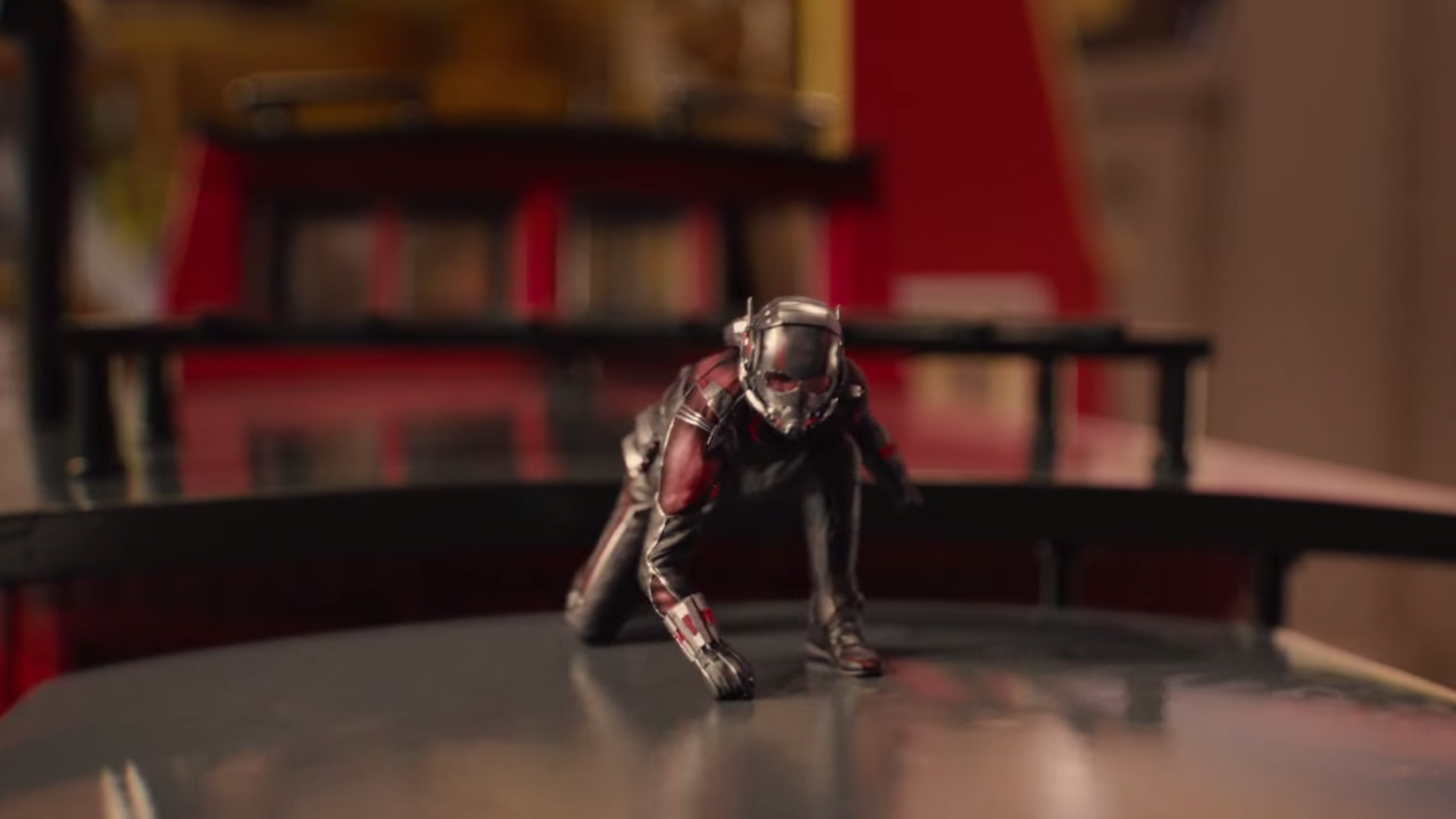 In Richard Matheson’s 1956 novel The Shrinking Man, Scott Carey, a milquetoast suburban guy, is exposed to a cloud of radioactive mist while on vacation. Combined with some chemical in his bug spray, the mist has an unusual effect: It proportionally diminishes him in size, at a rate of about a seventh of an inch per day.

It’s a gradual enough decline. He doesn’t quite notice at first. But one day, back at home, his hat comes down to his ears. The next even farther. From there Carey dwindles incrementally, growing smaller than his wife, his kid. Terrorized by the family cat, attacked by a sparrow in the garden, he’s finally lost in his own cellar, an inhospitable cavern, battling a black widow spider over crumbs of mousetrap cheese.

The Shrinking Man is not the first story to posit a man the size of a postage stamp or to experiment with radically altered human proportions. Mythology abounds with giants and fairies of all dimensions; in more modern literature we have, of course, Jonathan Swift’s Gulliver’s Travels, from which we get the most tongue-twisting words for very small and very big people in the English language, “Lilliputian” and “Brobdingnagian,” respectively. We have young Alice shape-shifting through Wonderland, and giant wasps and babies terrorizing the British countryside in H.G. Wells’s 1904 The Food of the Gods and How It Came to Earth, an uncharacteristically camp novel about scientifically induced gigantism that Wells called a “a fantasia on the change of scale in human affairs.”

But it wasn’t until Matheson’s contribution that miniaturization as a cultural genre really took off. 1956 was, of course, the perfect moment for it: the age of the atom’s magical grip on popular consciousness. After the bomb, the very small was in vogue, its mysteries having made an indelible crater on the world. Among the myriad mutations of midcentury science fiction pulp, shrinking or growing men (and their kin, the 50-foot women) were usually the result of some atomic accident or another.

The atomic age’s scientific promises narrowed very quickly the gap between the real world and the world of science fiction. In the mid-’60s, the medical adventure Fantastic Voyage promised that technology could someday shrink individual atoms safely enough to inject Raquel Welch inside a man’s body; a year later, Disneyland opened Adventure Thru Inner Space, which simulated being shrunken down to the size of an atom. In the attraction’s voice-over, a scientist ostensibly traveling through a “Monsanto Mighty Microscope” to the known reaches of the microcosmos marveled: “I am so infinitely small now that I can see millions of orbiting electrons. They appear like the Milky Way of our own solar system. This vast realm … This is the infinite universe within a tiny speck of snowflake crystal.”

Marvel’s incredible shrinking man, Ant-Man, made his debut in 1962, before Fantastic Voyage and the Monsanto Mighty Microscope but right on the tails of The Shrinking Man and its cinematic adaptation, The Incredible Shrinking Man. Unlike Matheson’s hapless protagonist, Ant-Man isn’t a victim of circumstance. Instead, he’s the superheroic alter ego of scientist Hank Pym, inventor of a chemical substance that allows its bearer to shift into the minuscule at a moment’s notice.

Hank Pym is back in Peyton Reed’s genuinely funny new Ant-Man, the latest in our generation’s mandatory slog through the Marvel universe. He’s out of the shrinking game himself — some irreversible damage done to the dome — leaving the work of mini-heroics to Scott Lang (Paul Rudd), a highly talented and conveniently moral cat burglar tapped to save the world. As in all filmic representations of this concept, Ant-Man pits its hero against an indifferent and giant world: Lang nearly drowns in a bathtub; runs on a vinyl record like a treadmill, narrowly avoiding the needle; and battles his nemesis on a toy train set, speeding in piddling circles in a little girl’s bedroom. One stunning action sequence takes place entirely inside of a briefcase.

Plays of scale like this seem to come in generational waves. After Matheson’s shrinking man and Fantastic Voyage, miniaturization didn’t return to the cinema until the ’80s, when the conceit, being inherently silly, was reframed as a vehicle for broad physical comedies and family movies — first with Lily Tomlin as The Incredible Shrinking Woman, an amiably daft adaptation of Matheson’s story, in which the catalysts are an experimental perfume and some household food additives, and then with Joe Dante’s Innerspace, which is Fantastic Voyage inside the body of a particularly elastic Martin Short.

The jewel in the crown of this cinema is, of course, Honey, I Shrunk the Kids and its accompanying television adaptation, sequels, and 3-D theme-park attraction; the franchise is a veritable buffet of proportions. HISTK is a perfect, childhood-defining use of the form, a kid’s movie that transforms the most familiar distance of a kid’s world, the 100-yard jog from the backyard to the living room, into a treacherous journey through skyscraper-tall Legos and monstrous insects. For a certain generation (mine), the vision of nearly drowning in a bowl of Cheerios is vividly imprinted.

These kinds of films reframe domestic life — a bowl of cereal, the family cat — as a cinematic landscape of awe and terror as exotic as anything on an alien world. Kids love it because the world already feels that way for them, like it’s built for giants. And like most things kids know intuitively, this is a deceptively profound truth. Our world of people-size functionality and people-size ideas has always been a delusion of our people-centric worldview and a necessary effect of our people-size needs. But people-size the universe is not. The universe is built for giants.

Brain-busting stretches of dark matter, the voids between galaxies like moats of blackness — the true scale of reality boggles the mind. To think properly about such infinities requires Brobdingnagian mental effort. As David Foster Wallace wrote in Everything and More, when you ponder infinity, you “feel, almost immediately, a strain at the very root of yourself, the first popped threads of a mind starting to give at the seams.” Smaller plays of scale — say, from person to ant — are easier to handle.

This isn’t to say that Ant-Man doesn’t get heady, because it does. The film’s most philosophical moments center on the question of what would happen if Lang were to keep shrinking, in orders of magnitude beyond the dime-size scales of the movie’s primary action. Would he “go subatomic,” capable of slipping between atoms, and permeate the impermeable? The film suggests that such an action might be considered only as a last-ditch heroic gesture; like the singular edge of a black hole, the atomic threshold can’t be uncrossed. It would be a fate worse than death to dwindle into nothingness, alone in the vast arenas of inner space.

The original shrinking man, Scott Carey, eventually becomes small enough to slip through the pores of a window screen. Doing that, he ponders his inevitable journey to the atomic realm. He reasons — quite sagely, considering his situation — that he won’t blip into oblivion, because nature must exist on endless levels, just like intelligence. He’ll keep getting smaller, but he’ll never die of being small, because his changing perspective will reveal new scales of reality, like a fractal, ever zooming. To God, Carey concludes, “there is no zero.”

Heady stuff for a B-flick, but reality seems to substantiate the proposition.

Claire L. Evans (@TheUniverse) is the Futures editor of Motherboard and one half of the conceptual pop group YACHT.

‘The Andy Greenwald Podcast’: Jack Antonoff on His Google Play Series and Emailing With Taylor Swift