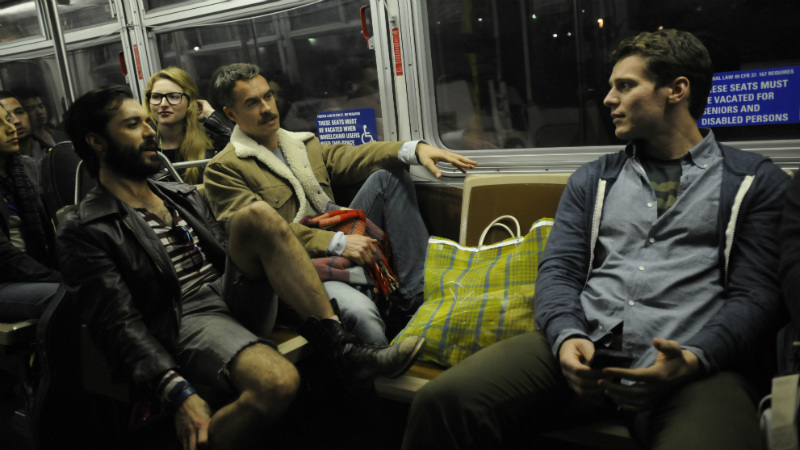 Looking, which premieres this Sunday night on HBO, is primarily about transitional moments like this: the roads that could be taken, the happiness that might be lurking behind the mistakes not yet made. It’s the sort of show that sneaks up on you in the best possible way. Even after Patrick emerges from the bushes, the story doesn’t pause to dust us off. There’s no time to get our bearings. Instead, creator Michael Lannan (from whose short film Lorimer the series emerged) and producer/director Andrew Haigh (the filmmaker responsible for 2011’s well-received romance Weekend) casually drop the audience into a fully formed world. There’s sensitive Patrick with his heart caught between his head and his hormones. Agustín, Patrick’s roommate and a frustrated artist’s assistant, who decides on a whim to move across the Bay to live with his boyfriend in Oakland. And there’s their mutual friend Dom (Murray Bartlett), still waiting tables at 39, his decade-old dream of starting his own restaurant fading fast. (Bartlett, an Australian actor who has locked lips with Hugh Jackman onstage, is especially good here as a man who’s come so far — his roommate, Doris, played by Lauren Weedman, was once his high school girlfriend — and yet is filled with restlessness and frustration over where he still wants to go.)

There’s an easy intimacy, sexual and otherwise, between these three that is rare on television. They often don’t know what they’re doing but, whether it turns out to be heartbreaking or hilarious, at least they’re doing it together. As Patrick says to Agustín after a particularly mortifying day, “I don’t know if either of us are very good at being who we think we are.” As Agustín reaches for a joint, Patrick adds, “Maybe we need to try a little harder?”

They couldn’t have picked a better place to try. San Francisco — at once high-tech and crumbling, ugly and beautiful, sunny but infuriatingly cold — has always struck me as a temporary city. It’s a place people go to find themselves. Once their search is over, they tend to move on. As played by the winning Groff, Patrick is a natural point-of-view character for a show like this: When we meet him he’s at the beginning of his search. The product of what we can infer to be a closeted upbringing, Patrick is overwhelmed by the options in his adopted hometown. In the pilot he meets-cute with Richie (the outstanding Raúl Castillo), a Mexican American bouncer who refuses to be objectified or treated like a one-night stand. And in the fourth (and, so far, best) episode of the series, Patrick spends the first part of his Sunday in his sterile office, flirting with Kevin, his English boss (the excellent Russell Tovey), and peeking out the window at the leather parade raging below. When Kevin is called away, Patrick descends into the street like Orpheus, meeting up with his friends, buying a leather vest, and chatting with a disarming sex worker named CJ. “That wasn’t me the other night!” he shouts later on, still wearing the vest, when he runs into Richie at a noisy bar. But knowing what you’re not isn’t the same as knowing what you actually are.

Looking is primarily about gay men but it uses that specificity as a way to expand story possibilities, not close them off. Early episodes introduce us to a panoply of experiences, from Dom’s nooner with a Wicked-belting neighbor to his growing friendship with Lynn, an older Castro Street resident played beautifully by Scott Bakula. They also demonstrate a remarkable sensitivity to prickly subjects like race and class, and a sure hand for more personal matters that range from simple jealousy to the unknowable limits of desire. (Agustín and his partner indulge in a three-way while Patrick has a small panic attack when forced to attend his ex’s bachelor party.)

What impressed me most of all about Looking was the way its world was both foreign to me and, at once, completely recognizable. It’s the rare contemporary show set firmly in the here and now: Romantic and professional lives are twisted up and tangled like the bracelets Agustín, an artist who doesn’t make any art, wears on his wrists. San Francisco, with its famously louche atmosphere, is upended even further by an earthquake of social media: While Lynn still takes to the bathhouse for conversation and, perhaps, a random encounter, Patrick can click idly through a hundred OKCupid profiles at work and Dom can use hookup apps like Grindr to order a meaningless fling as easily as a pizza. What the boys of Looking have in common with the Girls who air just before them is this sense of being paralyzed by options, of being trapped in a perilous, limitless moment you’ll one day remember fondly but, when it’s happening, you can’t wait for it to end.

I’ve long been advocating for more character-based shows like this, series that embrace the world as it is instead of seeking refuge in the way it was or never will be. But with competition for eyeballs at an all-time high, it’s increasingly difficult to sell a network, even one as historically artist-friendly as HBO, on something that lacks an appreciable hook. I suppose that Looking’s hook is its gay characters and the occasionally explicit sex that entails. But there’s a difference between a hook and a cudgel. Behind the jokes about assless chaps, Looking is a proudly, almost sweetly romantic show that dares to suggest that only the tools for connection have changed, not our desire to connect in the first place.

Where’s Walter? Why 'The Secret Life of Walter Mitty' Disappeared Without a Trace