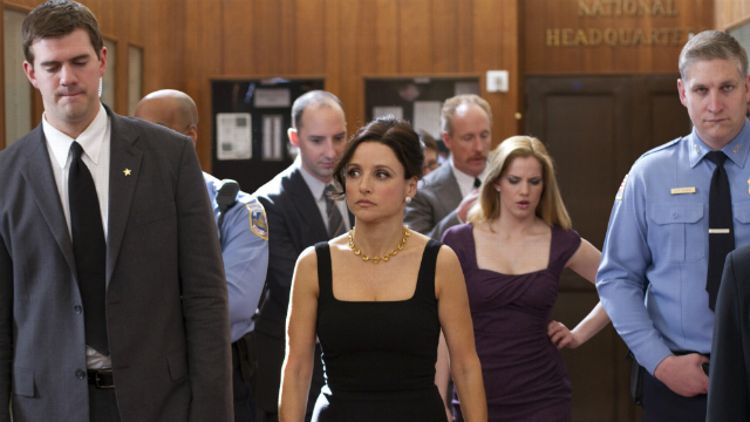 Exactly 200 years after their last semi-successful attempt at razing Washington, D.C., the British are finally back to finish the job with Veep. A funny, transatlantic fusillade of the first order, the new HBO comedy — debuting this Sunday night at 10 p.m. ET — smartly takes aim at the softest target in the capital: the vice presidency. Needless to say, it doesn’t miss. Starring a never-better Julia Louis-Dreyfus as Selina Meyer, the country’s first female second-in-command, Veep punctures every shred of pompous Washingtonian pomp and circumstance. Meyer is craven, misanthropic, and curses like a sailor stubbing her toe on a pirate. A heartbeat away from the most powerful job in the world, she’s utterly powerless, reduced to reading absurdly redacted speeches, sniping at her staff, and asking her secretary if the president has called. (She seems both infuriated and relieved that he never does.) For a brief moment every four years, the vice presidency is the most coveted position in the world. The rest of the time it’s a joke — and Veep has the punchlines to prove it.

The man behind this revolutionary assault, the one gleefully flying the bomber, Dr. Strangelove–style, is Scottish satirist Armando Iannucci, and Veep isn’t his first try at bringing his blue humor to the White House. That honor goes to his 2009 film In the Loop, a sly, sideways expansion of the triumphant mid-decade BBC series The Thick of It. Both centered around Peter Capaldi’s brilliantly bilious performance as Malcolm Tucker, the prime minister’s outrageously profane hatchet man. Armed with a WMD where his mouth should be and a seemingly inexhaustible list of synonyms for the f-bomb, Tucker was capable of reducing even the stiffest of upper lips into quivering jelly. He was brutal, yes, but brutally effective. Veep, by contrast, is set just to the side of such volcanic displays of authority. The vice president’s office isn’t where the lava originates, it’s where it collects, and there’s a giddiness to Louis-Dreyfus’s slow-burning impotence in the face of it. Surrounded by a cracked staff — standouts include Anna Chlumsky as Amy, Selina’s capable aide-de-camp, Arrested Development’s Tony Hale as Gary, the smothering body man, and underground comedy’s king “That Guy,” Matt Walsh, as Mike McClintock, the hilariously untucked press secretary (Mike has both the saddest mustache in the world and a picture in his wallet of an imaginary dog he invented in order to duck out of work) — there’s little for Meyer to do except meet, greet, and quietly wish for impeachment. Equal parts cynical and savage, Veep, in many ways, is the anti–West Wing: Meyer and her staff do plenty of walking and talking — there’s a balletic frenzy to the show’s direction — but rarely get anywhere. A clean-jobs initiative announcement is sunk first by low attendance (when encouraged to mingle, Meyer shoots back, “Did Simon mingle with Garfunkel?”), and then stabbed in the back with a soggy, compostable knife by the commander in chief when an errant tweet from the VP’s office offends Big Oil. Later, a frozen-yogurt photo op quite literally goes to shit. “I’ve met some people, OK, real people,” Meyer fumes at one point about her constituents. “And I gotta tell you: A lot of them are fucking idiots.”

By debuting the same month as the latest volume in Robert Caro’s forest-annihilating biography of Lyndon Johnson, Veep is likely to attract more straight-faced consideration than it deserves or, most likely, wants. (Caro, writing about the morning of JFK’s assassination, could easily be discussing Meyer’s behavior in the pilot: “Newspapers that day chronicled every detail of Johnson’s humiliation.”) While Iannucci has bolstered his all-limey writing staff with acclaimed liberal tut-tutter Frank Rich (listed here as an executive producer) and sent Louis-Dreyfus wandering the halls of Congress in search of research and inspiration, the only agenda on display is comic. No matter where one stands on the political spectrum (and it’s worth noting that Meyer’s party is never named), there’s something almost fiendishly satisfying in seeing Washington stripped of all holier-than-thou affectations. Through Iannucci’s unblinkered, foreign eyes, D.C. is less a shining city on a hill than a mucky company town built on a swamp, where access and favors are bartered for dates and Human Centipede is cited more often than the Bill of Rights. “Have you seen my flag?” Selina parrots with faux-cheer to every visitor. It’s a conversation starter, not a cause.

But if the world of Veep prioritizes style over substance, the show never does. In a comedy landscape littered with post-Apatovian sloth and Family Guy–inflected joke strafing, there’s something dizzyingly great about Veep’s fizzy, defiantly British lyricism. Credit casting, chemistry, or the six weeks of rehearsal HBO sprung for before the cameras started rolling, but no American sitcom has ever pulled off this sort of English-accented humor so well. (Remember the pilot of the domestic Office? Hopefully you don’t.) Anchored by Louis-Dreyfus’s peerless ability to switch from the quick quip to the slow burn, her arch insincerity honed by years of bisque-mentioning and yada-yada-ing , Veep is an expert exercise in recolonization. It may feel foreign, but it hits close to home.