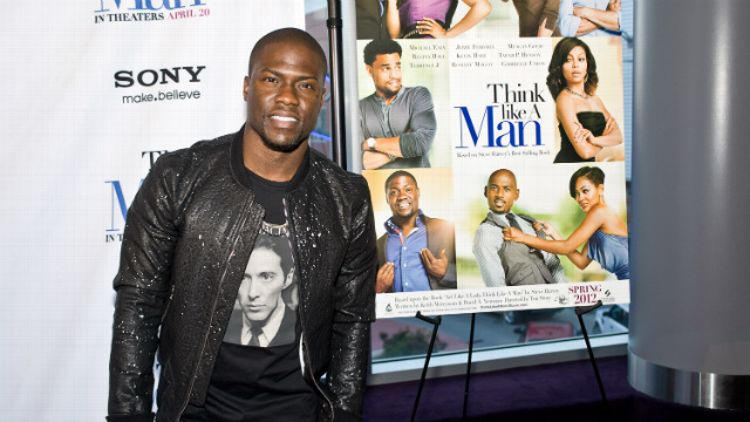 On the poster for Think Like a Man, two things are evident:

Unlike the rest of the costars, who are all interacting with each other, Hart has his own little piece of real estate in the bottom left-hand corner. And in the various trailers for the film, Hart gets the most screen time, the best punchlines. He even pops up at the end of the trailer, functioning as the film’s spokesman.

Then there’s the film itself, which I’ve seen, and if the poster or the trailers didn’t already give it away, allow me: Think Like a Man is Hart’s Leading Man Moment, a chance to prove he’s a star not just in the mythical world of black Hollywood, but in mainstream America.

The question: How did he get here? The answer: Hard work. It’s one of the oldest party lines in the book, but it doesn’t make it any less true, and for Hart, it’s a cliché he’s turned into a career mantra. In a scene from his most recent DVD, Laugh at My Pain, Hart is shown in a call-and-response with his entourage: “EVERYBODY WANT TO BE FAMOUS. NOBODY WANT TO PUT THE WORK IN!”

Whether or not Hart is famous depends on whom you ask, but look at the résumé, people! Who’s been working harder than Kevin Hart?

As a stand-up comedian, Hart’s style is a combination of all four Kings of Comedy. He has the dynamics of Steve Harvey (mostly loud), the physical comedy of Cedric the Entertainer, the snark of D.L. Hughley, and the biographical eye of Bernie Mac.

In 2006, I’m a Grown Little Man, his first proper stand-up album, was one of those cult DVDs. Everyone I knew had a copy, but nobody talked about it.

Eventually, Hart’s stand-up comedy became a hot ticket. In his 2010 Seriously Funny DVD, Hart is performing at the Allen Theater in Cleveland, Ohio; in attendance, Shaquille O’Neal and LeBron James. And yes, that’s LeBron up on his feet at the 1:16 mark. Also, Hart makes the phrase, “Say it with your chest!” become almost as famous as Dave Chappelle’s, “I’m rich, bitch!”

But Hart really hit it big with his 2011 Laugh at My Pain tour, which received a theatrical release as a concert documentary. The trailer is hardly modest about the tour’s numbers: “90 cities, $15 million in ticket sales” in big, bold letters. But like all legendary stand-up performances, the best way to measure impact is by the amount of people who repeat lines from the show in casual conversation. Next time you walk into a party, yell the following: “All right, all right, all right!” Look at the people who laugh. Those are your friends.

Things started off well, with some standout performances in the much-loved but not-much-watched coming-of-age sitcom Undeclared.

In 2004, Hart got his own show: The Big House on ABC, which was probably doomed from the start by its wacky premise. Hart played himself as a young, wealthy guy who has to move from Malibu to live with his distant relatives in Philadelphia after he gets caught up in an embezzlement scheme.

No wonder the show lasted only six episodes.

Later this year, Hart returns to television with something a bit more promising. BET announced earlier this week that it has ordered House Husbands, a semi-scripted spoof of the Bravo Housewives franchise based on “The Real Husbands of Hollywood” sketches Hart aired as host of the BET Awards.

You’ve heard of Donald Glover, a.k.a. Childish Gambino. Andy Samberg has his Lonely Island crew. But what do you know about Kevin Hart, a.k.a. Chocolate Drop?

Whatever you’re selling, Kevin Hart is your pusher.

Hart’s movie career got off to a rocky start, with his first big role coming in another ensemble comedy, Soul Plane. For those of you who’ve never seen it: Don’t. This isn’t one of those comedies that benefits from revisionist history. It was bad when it came out in 2004, and it’s just as bad in 2012.

Hart’s come a long way since then, keeping a low profile and slowly rebuilding his brand by nailing brief appearances in mainstream comedies.

Death at a Funeral.

But Hart’s best performance on the big screen remains his appearance in The 40-Year-Old Virgin as a Smart-Tech customer getting into a heated argument with Jay (played by Romany Malco).

Too many big words = disrespect.

After Think Like a Man opens in theaters this week, Hart is appearing in The Five-Year Engagement, another romantic comedy, starring Jason Segel and Emily Blunt, that opens next week. Later this year, Hart reunites with members of the Judd Apatow gang, starring opposite Seth Rogen in a buddy-cop comedy about a fictional first interracial police partnership. The film is still untitled, but we’re excited for it.

All this is to say Hart has put in the kind of work most comedians only talk about doing. He could have been a Hollywood afterthought after Soul Plane, but now he’s about to star in what has been billed as the “best-testing film” in Hollywood history. Yeah, Louis C.K. is funnier, Hannibal Buress is all the rage, and Aziz Ansari is cooler, but Kevin Hart can safely say none of them are working harder than he is, and he can say that with his chest.