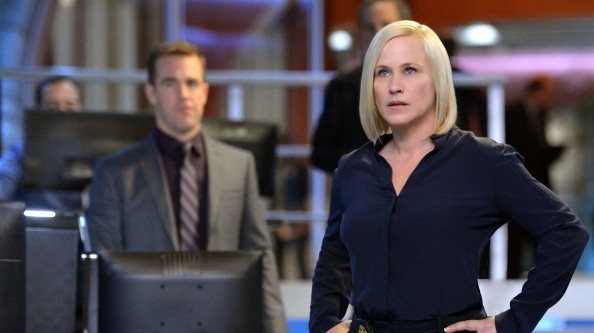 CSI: Cyber, which debuted last night on CBS to establish a new franchise outpost in Washington, D.C., is not, in the kind of highly technical terms the fledgling series traffics in, a “good” show. It’s a CSI. If you’ve ever seen a CSI — and the numbers say you have, the way they say you’ve breathed in oxygen and exhaled carbon dioxide — you have a pretty good handle on all that entails. There will be dead bodies. There will be actors you recognize squinting over those dead bodies. There will be a song from the Who.

No, CSI: Cyber is not a “good” show. Why must we always get so hung up on nebulous ideas like “quality”? Why can’t we recognize that it’s a beautiful show? Beautiful in its cast, which includes Academy Award Winner™ Patricia Arquette, making the kind of unfortunately timed career move that says “I am way too pragmatic a craftsperson to assume I was going to win an Oscar for the performance of my life; what am I supposed to do, wait around for the next 12-year movie shoot?”; the immortal and underappreciated James Van Der Beek, game for anything, including playing a character named “Elijah Mundo,” because once you start saying “Elijah Mundo,” you can never stop saying “Elijah Mundo” to yourself for the rest of your life — now you’re singing “Elijah Mundo” to yourself in the shower, and you hope this shower never ends; the weirdo from Ally McBeal; Shad Moss, a.k.a. Bow Wow, embiggened by his surprising versatility; a guy from Community, but not the guy you’re thinking of; and, somewhere down the road — but, sadly, not in last night’s premiere episode — Luke Perry, whom you don’t need me to introduce, as you can already hear the chorus of cherubim blowing the 90210 theme through their celestial horns and see the furrowing of that endless brow, wave after magnificent wave of flesh rippling toward the far-off shore of his stately hairline, because he appreciates how amazing those baby angels sound, even though they follow him everywhere.

It is also a beautiful show to look at, for reasons other than gaping in slack-jawed amazement at that perfect cast, imagining the dynastic wealth they’re sure to establish for their families, wondering how many boats will be too many boats.1 For almost every moment of clumsily recited, marble-mouthed cyber-jargon, there is a corresponding visual that will steal away your breath, upload it to the cloud, and sell it to the highest bidder on the darknet. Why can’t we put aside these nagging notions about “good” shows and “bad” shows and just celebrate the beauty of those moments? You’re right: There’s no reason we can’t.

But first, OK, a very, very brief primer on the plot of that premiere episode, titled “Kidnapping 2.0,” so we have some basic grounding for the celebration to come: Someone is hacking into nanny cams up and down the Eastern seaboard and using the night-vision intel2 provided to help kidnap babies for an international infant-auction ring.3 Because “any crime involving electronic devices is by definition ‘cyber’” — thank you, Academy Award Winner™ Patricia Arquette as behavioral psychologist Avery Ryan for so clearly defining the boundary of your authority — the CSI: Cyber team is called in to solve the case. Eventually they solve the case. Before that, all of the magical things you will experience below (or re-experience, if you know how to live life on Wednesday nights) occur.

The first thing one must do when arriving on the scene is confiscate the devices. All of them: laptops, phones, mircowave ovens, whatever, no exceptions. They are potential accessories — no pun intended [whips off sunglasses; Roger Daltrey hologram appears to scream the chorus of “I Can See for Miles”] — to the cyber-crime. And those confiscated devices must be placed in Faraday bags. “We zip ’em up. It’s like locking them in a lead vault,” explains Academy Award Winner™ Patricia Arquette again, because it is the team leader’s job to handle the most thankless bits of exposition. Except it’s nothing like placing something inside a lead vault, because can lead vaults harmlessly repel a barrage of tiny hacker-beams while sitting atop a kitchen table? We’ve never seen a lead vault do that. Call these Faraday bags what they are: magical laser-deflection pouches. You don’t need to dumb this down for us with familiar security imagery, Special Agent Lead Vault.

“Remote-access Trojan. Spy software available anywhere on the surface net. Forty-buck download, basically anybody with half a brain can use it,” sneers white-hat hacker king Daniel Krumitz at the out-of-the-box solution deployed by these technologically infantilized baby-snatchers. Computer-borne diseases can be maddeningly abstract in the hands of lesser artists, but when you see a REPLICATE command4 self-perpetuating and evil red static spiderwebbing over cascading lines of once-pure green code, you immediately get it: Some cyber-shit is getting royally fucked up. And Krumitz needs to unfuck it stat.

Have you ever wondered what it would be like to watch a bunch of baby-crazed foreigners haggling their way through a virtual newborn-auction? It looks exactly like this. Please take the time to appreciate the grace note of the visual representation of their bids in that audio waveform oscillating in the background. Academy Award Winner™ Patricia Arquette appreciates that attention to detail, as much as she’s disturbed by the necessity of mentally eavesdropping on an eBay for stolen babies.

As we alluded to earlier, a crucial part of the franchise is the inevitable autopsy scene, where our team of investigators circle a cadaver — often semen-splattered, because the world is a depraved place, and CSI never flinches from its sacred responsibility to wave the Black Light of Truth over that depravity — and beg it to yield its horrible secrets. But what if they didn’t need to be physically present to coax out the deceased’s testimony? What if that autopsy could be conducted virtually, from many miles away, incorporating a variety of Minority Report meets iOS 8 pinching and waving gestures? What if the corpse could rise up in midair, commanded by mere touch to reveal the series of pulsating CGI scars that suggest an in-over-her-head kidnapper had at one time smuggled drugs inside her silicone implants? What if our team could delegate the waving of that Black Light of Truth to a networked server farm, allowing them to never again defile their hands with the sticky residue of man’s inhumanity to man?

That would be very cyber. Very cyber indeed.

You heard the man. Brody Nelson, a hacker pressed into cyber-team service to atone for some criminal black-hattery, thinks better when he talks it out in deceptively childish rhyme. Password accepted. On the first attempt. In far less than the 10 billion years Agent Krumitz — alleged king of the white-hats, if you hack it, he will come, etc., etc. — estimated. Sometimes all it takes is an openness to the public recitation of a simple nursery rhyme to crack a code so complex it had to be permanently inked onto the torso of a Russian thug beneath memorial portraits of his dead loved ones. We can all — not just the haughty Agent Krumitz — learn a lot from Brody Nelson.

After every case, Academy Award Winner™ Patricia Arquette goes somewhere to think. To sit in the shadow of one Abraham Lincoln — America’s original cyber investigator, tireless decrypter of a proud nation’s scrambled identity — and reflect upon the events of the day. No matter how many lives she saves, she knows that the hacking that ruined her psychology career and shuttered her thriving practice can never be undone, knows that her hacker’s still out there somewhere. But she also knows that if she returns to sit at the feet of her hero often enough, he may eventually get down off that marble throne and take a seat beside her on those darkened steps, lean over, and whisper in her ear the clue that blows her case wide open.

Or he might hand her a Faraday bag containing a thumb drive with all the answers. You never know how Abe 2.0’s going to roll.

Either way, she’ll be ready.

And so will Elijah Mundo.

We just had to type that name one more time.