Grantland Reality TV Fantasy League: Looking for Love on All the Wrong Channels 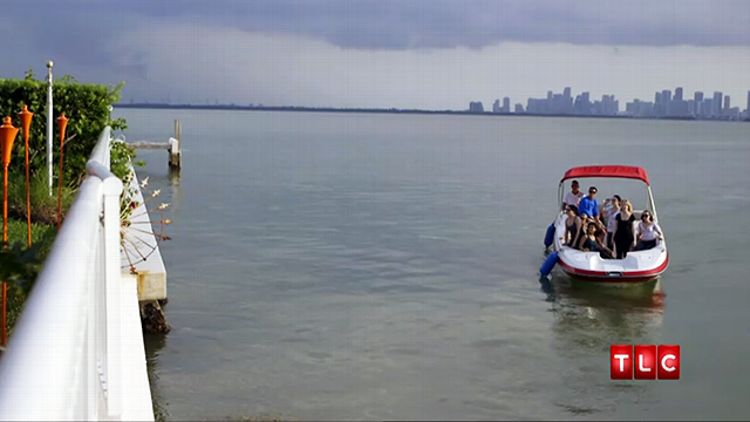 We’re in crisis mode here at GRTFL headquarters. With only Survivor in the rotation, I’m in desperate need of some new shows about which to make tacky jokes. It’s gotten so bad that last week Bill was all, “Yeah, I saw that your column was all about Survivor last week, so I didn’t read it.” What a dick, right?

Here’s the thing, though: It isn’t for lack of trying. It isn’t my fault that all of these shows suck. I’m in the market for another long-term relationship, but after going on three dates this week, I fear they were merely one-night stands.

Allow me to explain, show by show, why even I can’t commit to a weekly fling with these programs:

GRTFL-ability: I was excited about this show. Classic fish(er women)-out-of-water setup. Take a bunch of native Alaskan women who have only been exposed to bearded and Carhartt-clad fisherman with Neanderthal charm, ship ’em off to Miami, and sit back and watch as hilarity and everlasting love ensue. Looks good on paper, right? What the TLC suits green-lit was Deadliest Catch meets The Bachelorette meets Breaking Amish meets The Jersey Shore; what they got was too much reality and too little show.

These women just aren’t built for television. They’re nice, they’re great Americans, and I’m sure they would be a good hang for an hour at a bar, but I don’t want to invite them into my living room for an hour every week. For lack of a better term, they’re too normal.

Sure, they each have their little story: Haley just got out of a relationship, Jenny had a child at 14, Lacy was raised in a village of 200, blah blah fucking blah. None of them has on-camera presence. Their personalities, like their flesh, are buried under layers of protection for fear of exposure. Not exactly what you want from a GRTFL show.

Breakout Star: XTRATUF Boots. Everyone in Alaska wears these. Everyone. If Kanye isn’t rocking a pair of these fuckers with a kilt this winter, I’ll lose all faith in fashion.

Best Moment of the Trailer: This chick tries to jump on a bed and misses. Can someone just start the People Falling Over Network already? I would watch PFO all fucking day.

GRTFL-ability: When talking about this show, one has to start with the names: Tribble, Africa, Vawn, and Sincerely are all names of human beings on this program. No joke. The show is produced by Mona Scott-Young, a woman who’s pushing the already-pushed-too-far boundaries of secretly scripted reality TV and producers turned hosts. Ms. Scott-Young has delivered hits with Love & Hip Hop [Insert City Name Here], where she pumps out episode after episode of fabricated love triangles, real weave tugs-of-war, and events that the entire cast conveniently attends.

The New Atlanta takes the whole fake reality show thing a step further. Every time the cast members are at a bar or restaurant, it’s clearly daylight, the place isn’t open yet, there’s no music playing (a serious problem for actual reality shows), and the background is perfectly stacked with groups of two or three people who are supposed to make the place seem functional, but who can’t quite pull it off.

The thing is, if Scott-Young is going to fake a reality show, can’t she make the story lines more interesting than this? Tribble and Vawn are at odds because Tribble doesn’t approve of Vawn’s promiscuity. Seriously. Alex and Africa are at odds, because, um, that was never made 100 percent clear, but it will all come to a weaved head next week with a bathroom brawl.

Someone please explain to me how, in the middle of an event at a crowded nightclub, this show is going to have two-camera coverage of a conversation in a women’s bathroom? I’m supposed to believe this is real and not staged? I’m all for suspending disbelief in the name of enjoying trashy television, but this incarnation of reality TV is a little too far from reality for my taste. At the end of the day, my real complaint about this program is that, unlike the city of Atlanta, this show has no soul.

Breakout Star: The online series A Hot Minute With Vawn. A man, wearing a paisley blazer, drinking a cocktail, sitting on a zebra/cheetah (zeetah?) print bed, explaining … everything to women.

Best Moment of the Trailer: Just watched it again. There isn’t one.

GRTFL-ability: I gave up on the Top Chef franchise ages ago, but it’s still trucking along, churning out season after season like the contestants churn out dish after dish. The current iteration is more of the same: Padma the angelic, beautiful-yet-insecty good cop; Colicchio the bald, bad cop; and the latest crop of confident cookers vying for their praise.

In the episode I watched, they laid the New Orleans on a little heavy. There was a gumbo challenge. The cast wasn’t particularly interesting, but the food they cooked was. Forty-second soliloquies including personal origin stories and “fusions” of all types preceded every dish. Just once, I’d love for a chef to look Padma right in her perfect face and say, “This is a grilled cheese.”

The thing that makes this show tough for GRTFL is that the people are actually, you know, talented. And, gasp, doing stuff. I could make points based on them passing the blame bucks on to teammates, using phrases like “homage to my [blank] heritage,” and getting flirty with judges, but none of that is as fun to track as concealed erections or denied coitus. This show is excellent, but it’s also serious. I’m not definitely out on it as a potential GRTFL staple, but I think I need another week to evaluate it before making a decision.

Who am I kidding? I just want more Padma.

Breakout Star: The house. I may just be watching too much HGTV, but the New Orleans architecture looks better than the food.

Best Moment of the Trailer: “Cook only what you can find in the Dumpster on Bourbon Street.”

Now, don’t get me wrong, I’m going to watch these stupid shows every week even though they aren’t any good; I’m just not going to write about them. Please leave suggestions in the comments for other shows that you think would make good GRTFL fodder. I’m running out of ideas.

Last week, the soon-to-be-divorced-but-currently-very-good-looking doctor couple got reunited on Redemption Island. Candice was there because John didn’t take her place when he had the chance. He cried about it a bunch later. John was there because he got blindsided.

This episode began with their Redemption Island reunion. I don’t care if it was editing or whatever, but you should kiss your spouse when you’re stranded and starving and haven’t seen him or her in a few days. Who goes hug-only in that situation? Oh yeah, people who are about to be divorced. Anyway, next thing you know, Marissa and the soon-to-be-divorced-but-currently-very-good-looking doctor couple are walking into the Redemption Challenge, and Candice is letting the bird fly high:

She’s pissed. It isn’t totally clear why at first, but Jeffy P got to the bottom of it quickly:

Jeffy P: Candice, why are you upset?

Candice: I wanted someone to come in that [Marissa and I] could team up to beat.

Jeffy P: Somebody that you could hate?

Candice: Somebody like Brad Culpepper. [Stares at Culpepper.] Just, you know, look away. You’re a child. (5 points)

OK, a little context here. Brad “Not Daunte” Culpepper is the former NFLer who is NOT DAUNTE Culpepper but is the alpha male of the tribe engineering the ousting of Candice’s soon-to-be ex-husband. Got it? Back to the fight:

Candice: We have been listening to the people that get voted off about how he is shushing the women and …

First off, I can almost understand the strategy of not taking your wife’s place on Redemption Island on a television show. I CANNOT UNDERSTAND NOT TAKING YOUR WIFE’S SIDE IN AN ARGUMENT. No matter how wrong your spouse is, you back him or her up in a public setting and then laugh about how wrong he or she was when you get home. If I was in the middle of a desert, impaled by a railroad spike, and John was the only doctor for miles, I really think I would wave him off and try to handle it myself. He’s too good-looking, with too little common sense, to have much value. I don’t think John will prove me wrong this season.

First off, Tyson’s feet are all kinds of fucked up:

Tyson, you’re right next to the ocean, man, dip a toe in and wash off the leprosy.

Tyson spent the day straight lounging because he is milking a (fake) shoulder injury and using the downtime to run a criminal organization with the help of his man Gervase. “Me and Gervase, we have a cool thing going now where we will sneak off and drink a couple coconuts. … We’ve been opening ’em a different way so people don’t recognize that we have been chopping them.”

Operation Coconut was almost shut down when Female Rupert and Monica noticed that all of the coconuts were dry and had little cuts in them. Somehow, Tyson convinced them that crabs were eating the coconuts. This is clearly the GRTFL Questionable Moment of the Week:

Why don’t Tyson and Gervase just hide the coconuts? Is there a shortage of coconuts? Has there been a coconut-less Survivor season? Aren’t coconuts all over the place? Why are Tyson and Gervase even hiding in the first place? Why didn’t the producers establish a coconut shortage? Why don’t Tyson and Gervase eat the meat of the coconut? Why are some coconuts brown and some green? If I were starving in the wild, how would I open a coconut? Why is coconut water so fucking expensive? Have you ever had a coconut water cocktail? Why not? What kind of crab has the ability to open a coconut? Wouldn’t you be WAY more concerned about a crab that could cut a hole in a coconut with its claw creeping around than with a shortage of coconuts? Did Tyson open the coconuts with his toe fungus? Did you know that Gervase has a gigantic PAGONG tattoo because that was his tribe name on Survivor 13 years ago? How long is it going to be before Rembert gets a Grantland tattoo? What kind of tree do coconuts grow on? Why don’t coconuts grow on any palm trees in L.A.? Did you know that 125 million people watched the finale of the first Survivor season? Will Survivor ever get canceled? Will Jeffy P ever wear a shirt that isn’t blue? Will I ever add another show to the stupid GRTFL already?

Seriously, I need your help. Please recommend some shows before I finally cave and watch The Amazing Race. Enjoy your weekend and watch every one of Bill and Jalen’s 2013 NBA Previews at least a dozen times. They get better with time.