‘Girls’: There’s No Such Thing As a Free Snack 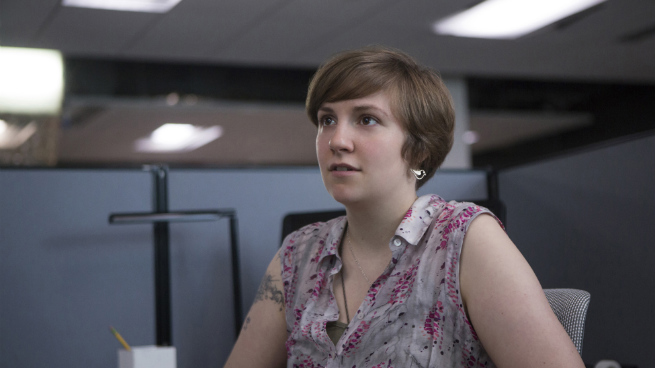 Rembert Browne: Oh, nothing to see here. Just an episode about beginning your career and being slapped in the face by the reality of maybe having to pay your dues before you can follow your true dreams. And the idea of your nights and weekends as the time when you actually do work, not the hours between 9 a.m. to 6 p.m. when you’re actually at your desk. And having to ask yourself if it’s all worth it. And the terrifying prospect of looking up and realizing you’re doing the same thing you were doing 10 years earlier.

Talking about this episode could get really dark. I’m ready to go there if you are, but it involves releasing some previously repressed thoughts on my end.

Get back to me. I’ll be looking through my old notebooks. You know, the ones with the detailed plans about how to get yourself dramatically fired, but not before starting an internal coup and taking as many steno pads as can be lugged under a coat.

Emily Yoshida: Oh, Rem. Rem, Rem, Rem. I hate to once again be on the other side of this Clif Bar buffet from you, but I could not have been less moved by a half-hour that superficially hit closer to home. I guess the closer you are to a subject, the easier it is to criticize, but still, this episode infuriated me.

First things first: There was another shout-out to a media outlet whose name begins with “G” but is not Grantland — this is just getting cruel by now. But mostly, there was the absurdity of Hannah turning up her nose at a great writing gig so as to keep her artistic integrity intact. This was a confusing half-hour because, keeping in form with the rest of this season, I really could not tell if we were supposed to see Hannah’s complete lack of gratitude for what seems like a nice setup for a 25-year-old with no formal writing experience as, well, icky. If we were, I guess that’s better than just full-on condescension to the hardworking advertorial copywriters of America, or any workaday lifestyle that doesn’t fit into a romantic creative glamour template, but I’m also just sick of seeing all the ways in which Hannah sucks.

Taking shit jobs that don’t let you realize your artistic vision is a part of life. Taking cushy jobs with free snacks that pay you for your brain but don’t leave you very much extracurricular time to fully express your creativity can also be a part of life — a VERY LUCKY LIFE.

Browne: I alluded to it last week, but maybe Lena’s point with all of this is that Hannah Horvaths are plentiful in this world and, at the end of the day, we (members of this Hannah-filled generation) are the worst? I didn’t see this angle coming, but it’s starting to feel too obvious to ignore. A 25-year-old “turning up her nose at a great writing gig so as to keep her artistic integrity intact” is absurd, but that’s also a very real symptom of leaving a liberal arts college and being groomed to think you’re the second coming of Joan Didion, simply because you got patted on the back for your honors thesis.

As much as this episode might have annoyed you with its intense superficiality, it wasn’t unrealistic. Hannah’s main problem going into the GQ office was naïveté, and that, along with privilege and the idea of deserving things immediately without ever having proved yourself worthy, are all real things — no matter how annoying it may be to watch during a 30-minute sitcom comedy thing.

Should we talk about the specifics of the episode, or just try to get the other to admit that they had a Hannah-at-GQ phase — even just once, even for just 72 hours?

Yoshida: I guess I meant superficial as in … I recognize the setting of a cluster of cubicles in the office of a respected publication. I recognize the joy of your first overstocked break room, though I’ve had enough office jobs and internships by now that I realize that the more lavish the breakroom, the more soul-sucking the job. A site I worked for long ago that shall go unnamed had a break room stocked with an unlimited supply of every kind of chip and candy and a “secret” wine drawer because they knew that would be one of the few ways they could get us to stay till 9 p.m. At Grantland, we’ve got a couple of cash-money vending machines and a file cabinet with like two packages of fruit snacks in it; do the math.

So, on the surface, I recognized the situation. But as the logical inconsistencies started to add up (a Neiman Marcus advertorial would be assembled by an outside agency; you would not get a cubicle at GQHQ for writing blurbs about fedoras), the writers’ unfamiliarity with such a scenario and its real-world emotional stakes became more apparent (any IRL Hannahs I know would be TWEETING FOR JOY that someone was paying them for words, no matter the context). Most importantly, there seemed to be a complete lack of respect/understanding for the kind of people who maybe will just toil away as copywriters for most of their adult life and never write a memoir but still be nice, chill people.

As far as me having been a Hannah, I mean, do I sound sanctimonious if I say I’ve never felt that crisis in that way? No matter how mad and drunk I was at Wine Office, I knew quitting wasn’t an option because I had nothing better going on at the time, unless I wanted to be a full-time Tumblr-er and live under a bridge. I just part-time Tumblr’d and slept about two hours a night and eventually got fired.

Browne: As someone who was almost a full-time WordPresser living under a bridge, I get why you wouldn’t want that to be an option.

Even though I still am into the picture that Lena’s painting of Hannah as the newly hired snot at GQ, the one thing that annoyed me was that she came off as overqualified (a word that –contrary to popular belief — is simply code for “I’m too good for this”). The fact that her ideas were hitting in the meeting — her first meeting — almost made it seem as if she had a reason to feel above her colleagues. A reason to assume everyone else there wasn’t talented. A reason to walk into her boss’ office, saying she had no intention of being in an environment like this in 10 years. There’s that small aspect of it that suggests to the viewer, “Well, maybe she has a point. Maybe she is overqualified. Maybe she deserves.”

I don’t know. Even while I recognize the episodes are getting better, I’m beginning to fall down a How to Make It in America K-hole with the show, between the occasional realism and the “nothing that just happened would ever happen this makes no sense”–ism.

That show, HTMIIA, did mess with my head, though. For better and for worse. Now that I’m a few years down the road, I can openly admit that How to Make It in America affected some of my life decisions. It’s embarrassing, but true, because as empty as it often was, a Sunday night viewing repeatedly led to “maybe-this-is-my-last-day” Mondays for my volatile 23-year-old self. And, again, sometimes that was bad. But other times, necessary.

Yoshida: There is no shortage of American narratives vaguely about aiming to “break free” and “follow your star” and “just breathe.” Young people will never be at a loss for songs and stories that corroborate their itching suspicion that they need to get out there and live their truth. Like you say, I can’t really tell if last night’s episode, or Girls in general, is one of those stories. When Hannah learns that her coworkers have had their jobs for five to 10 years and reacts by freaking out and sticking her head under the minimalist chrome faucet in the restroom, I wanted to kick my TV, but the music was mourning along with her. Her own personal soundtrack of tiny violins.

You know, I did quit a job once because I felt like it was vampiring my life force when I needed to focus on my personal creative development or whatever. I was an “executive assistant” illegally employed for $11 per hour as a private contractor by an entertainment lawyer who verbally abused me on a daily basis, but I still regretted quitting a month later because I realized that the script I had “optioned” earlier that year wasn’t going anywhere and the insurance money I had received after being hit by a car on my bike during my commute would run out in a couple months. That happened when I was 23, but the misery of the year or so after I sent my dramatically cathartic resignation email will be seared in my brain forever.

Really, everything can be illustrated by the end of The Graduate. You build and build to the emotionally satisfying breakthrough, but that “Well, what now?” feeling starts creeping back in sooner than you expected.

But wait, doesn’t Hannah have a book deal? Did we miss something?

Browne: On that last point: How did Hannah end up at GQ? How did she go from winning over book publishers to suddenly having her first day at GQ and winning over an entirely new set of superiors?

I don’t know what else I have to say about this episode. As just a television show, something I wish I could treat it as but cannot, it was interesting. Something happened. I laughed. Potentially interesting characters were introduced. These are all good things for a television show. But the show is inching closer and closer to a bizarro version of my own life, and it consistently reminds me of the type of not-yet-30-year-old that I can’t ever let myself be. Or surround myself with.

Yoshida: Speaking of boys, I guess I’ll wrap this up with a brief plug for Looking. Looking was originally billed as “the gay male Girls,” but that’s not quite accurate. It’s more like “Girls, but if the creator wasn’t consumed with disdain for her own characters.” Check it out sometime!

'Game of Thrones' Has Released a Season 4 Preview Video. You'll Never Believe How Long It Is. (14 Minutes.)