‘Game of Thrones’ Precap: Bastards, Basements, and Beyond 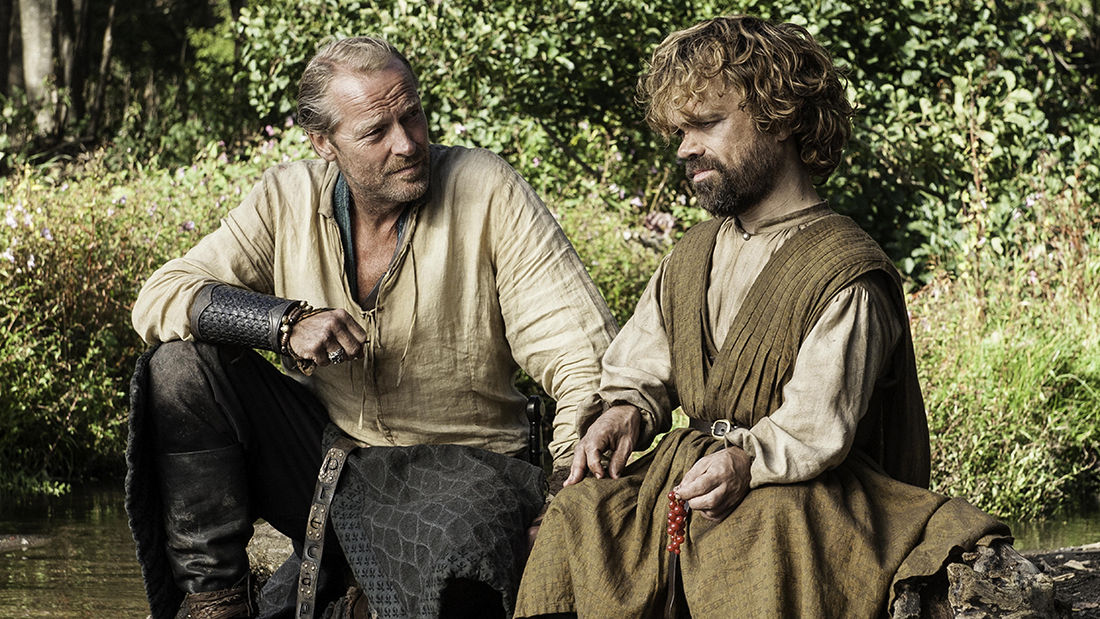 The Maester List: Questions to Consider Before This Sunday’s Episode

Willie asks, “I understand Bran will return but do we need to care about Rickon? He’s a dud and his ‘mystery’ location / existence seems to be on the bottom of the GoT list.”

Well, as the only living male child of Eddard and Catelyn Stark who is not crippled and chilling under a magic tree beyond the Wall while being trained by a wizard, Rickon is a potentially powerful symbol for any disaffected Northern nobility looking for a figurehead to rally around. There are probably many lords of the North who would consider him their rightful king should he ever return from wherever the hell he is.

Daniel asks, “1) Do we know where the bastard surnames of Snow and Sand originate from? 2) Given that Westeros and Essos don’t exactly have paternity tests, how does anyone know who fathered any of these people? Is there never a dispute over parentage, or a lord saying ‘No, that’s not my kid’? Or, in the case of the bastard Robert fathered with one of Littlefinger’s brothel workers, how would anyone (including her!) know who the father was, given her line of work? Is it just a thing in this world that everyone tells the truth 100% of the time, and that’s why vows are so important?”

Bastardy and naming rules seem to be a confusing point for some show watchers. Basically, a bastard is a person born from parents who are not married. Remember, in Westeros, many pacts are sealed by marriage and the rules of inheritance depend on property, lands, and titles flowing within a family. Additionally, we’re talking about a superstitious, medieval society in which it’s commonly held that the passions that caused the birth of a child become part of that child’s character. If a baby is born of a scandalous, out-of-wedlock union, it’s believed that the child will grow into an unreliable person, and so bastards are often ostracized, both legally and culturally. The bastard surnames indicate the region that the bastard is from, not the parentage. The surnames correlate to some essential feature of the area that the child is from and are used by noble houses to indicate bastard children born of noble parentage. They are:

A lord can bring his bastard into the household and make him part of the family, like Ned did with Jon, but it takes a royal decree to legally legitimize a bastard and remove the surname. Ned could have gone that route when Robert was king, I guess. But that would have screwed over Bran and Rickon because Jon would have jumped into the line of inheritance right behind Robb. This is why, even when bastards are accepted by their families, true legitimization is often the last resort.

Game of Thrones: The Musical, Starring the Mother of Reggae, Tyrion Lannister’s Cabaret Stylings, and the Tuneslayer

Mallory “Mother of Dragons” Rubin: Greetings, my fellow corpse cleaners! How are you? It’s been a challenging week for the loyal nail clippers, skin scrubbers, and hair washers among us. If you’re still feeling glum after Sunday’s depressing Thrones installment, perhaps you should try to focus on the episode’s more cheerful elements, such as the dope subterranean face closet that your girl Arya discovered! But where does the House of Black and White’s underground epidermis temple rank among Thrones’s badass basements? Glad you asked.

1. The Hall of Faces: Looking for some interior decorating tips? Look no further! The Faceless Men know that throw rugs and custom paint blends can’t hold a candle to the pallor of thousands of facial skins propped up in cubby holes, presumably just waiting to be worn! Who needs the Resurrection Stone when you can keep bits of your loved ones with you forevermore — and bits of strangers, too? But wait, there’s more! The best part of this man cave is that it provides a built-in party pastime: Guests must survive the Game of Faces before entering, or risk punishment worse than stale candy corn. So swap the foyer punch bowl for a basin of poisoned water, erect living-room statues of all the death gods you can name, and spend your cellar hours gazing into eyeholes that no longer see.

2. The Crypts of Winterfell: What’s better than a badass basement? A badass basement that’s also a panic room! Bran, Rickon, Osha, Hodor, Summer, and Shaggydog hid in the Winterfell crypts for many moons while Theon barbecued the neighbors upstairs, and no one was the wiser. Better still: The crypt moonlights as a gallery! Any hole in the ground can house a body; the Winterfell crypt quite literally turns tombstones into an art form, with Stark lords, ladies, direwolves, and swords etched eternally into stone.

3. The Catacombs of Meereen: The best basements are versatile — your foosball table here, your wet bar there; your PS4 here, your pet dragons there. Dany was a fool for chaining up Rhaegal and Viserion, but her idiocy helped shine a light on all that the otherwise pitch-black catacombs have to offer. The King of Qarth might have thought his fancy golden vault was impressive, but it definitely couldn’t house two rapidly growing dragons. Of course, the catacombs are so much more than a prison: They’re also great for neighborhood block parties, as Dany learned when she brought the Meereenese masters down for a chat and burned one alive as his peers watched, cowering in terror. Sharing is caring!

4. The Dungeons of the Red Keep: This is, admittedly, stretching the definition of “basement,” but the lords of Westeros have never put much stock in semantics. While the King’s Landing dungeons contain jail cells just like any other, there’s nothing generic about the secret passageways Varys and Tyrion used for stealth purposes, nor the corridor lined with dragon skulls that Arya stumbled into way back in Season 1 while chasing cats. Cats are amazing. They spend their lives eating, sleeping, and licking their own balls, so if they like this place, it must be good.

5. The Lair of the Three-Eyed Raven: Surely the outdoorsmen among you will appreciate the idea of a natural basement, hollowed out by time and unknown magical forces, nestled beneath a great weirwood tree. This underground dwelling may lack the digital accoutrements that more modern basements boast, but it has an omnipotent three-eyed raven with tree roots growing out of his head, so who gives a fart about an all-in-one iPad control panel? Plus, the security is built in: Not just anyone can venture below when the army of the dead is lurking in the snow and a child of the forest is waiting in the shadows. Get on the guest list or GTFO. 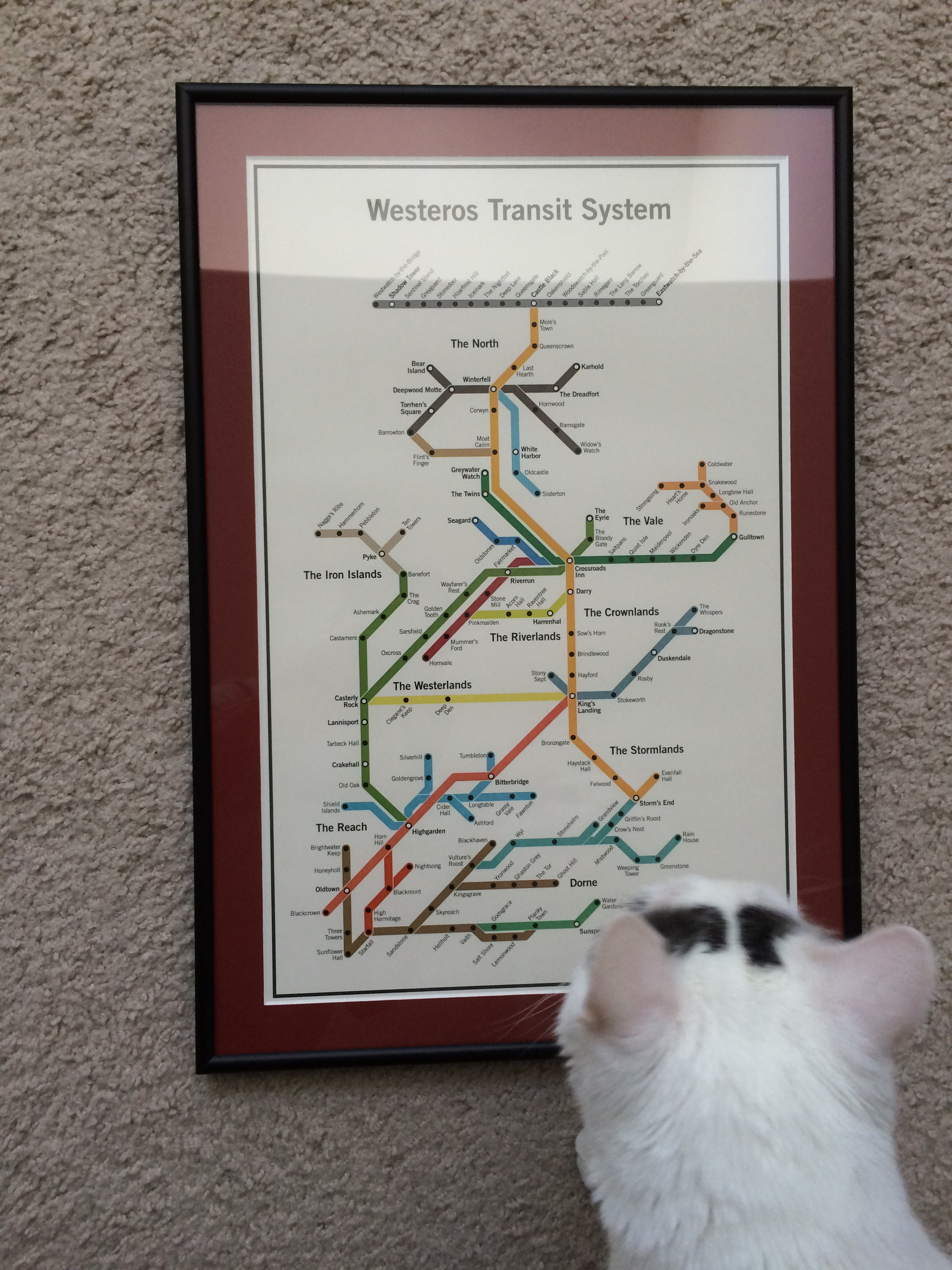 The “I’m Not Sure I Understand the Concept of ‘Cock Merchant.’ Can You Explain That Line of Business to Me?” 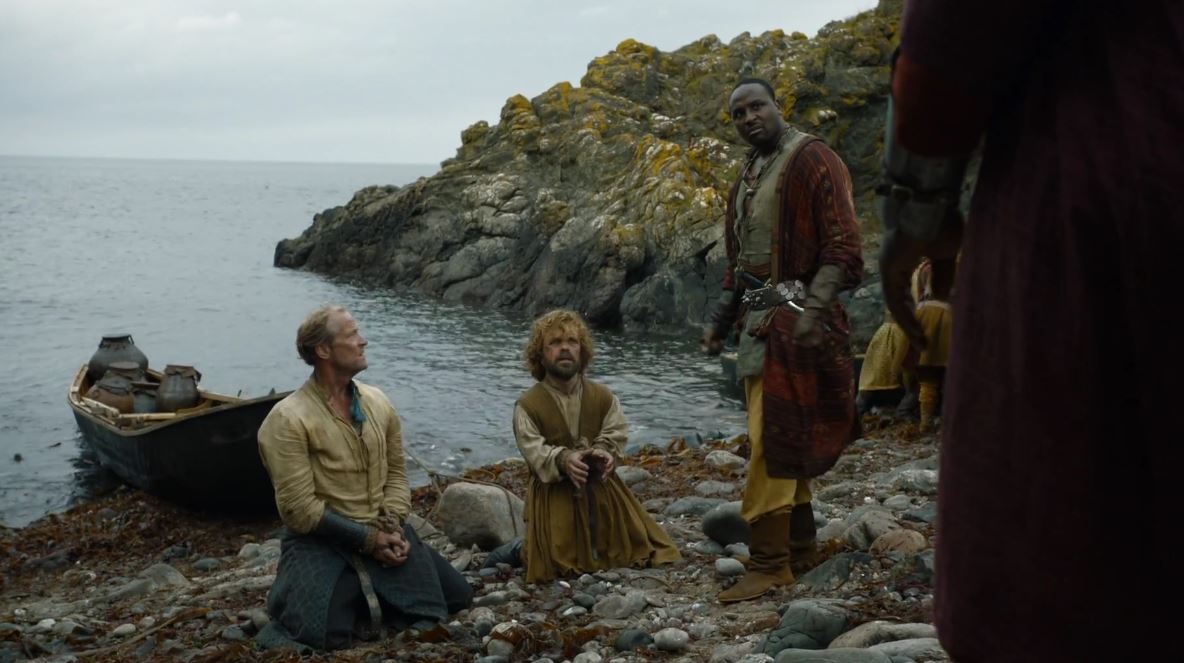 The “Why Yes, I Have Always Considered My Penis to Be Magical. But Something Tells Me I Shouldn’t Be Playing Up That Fact Right Now” 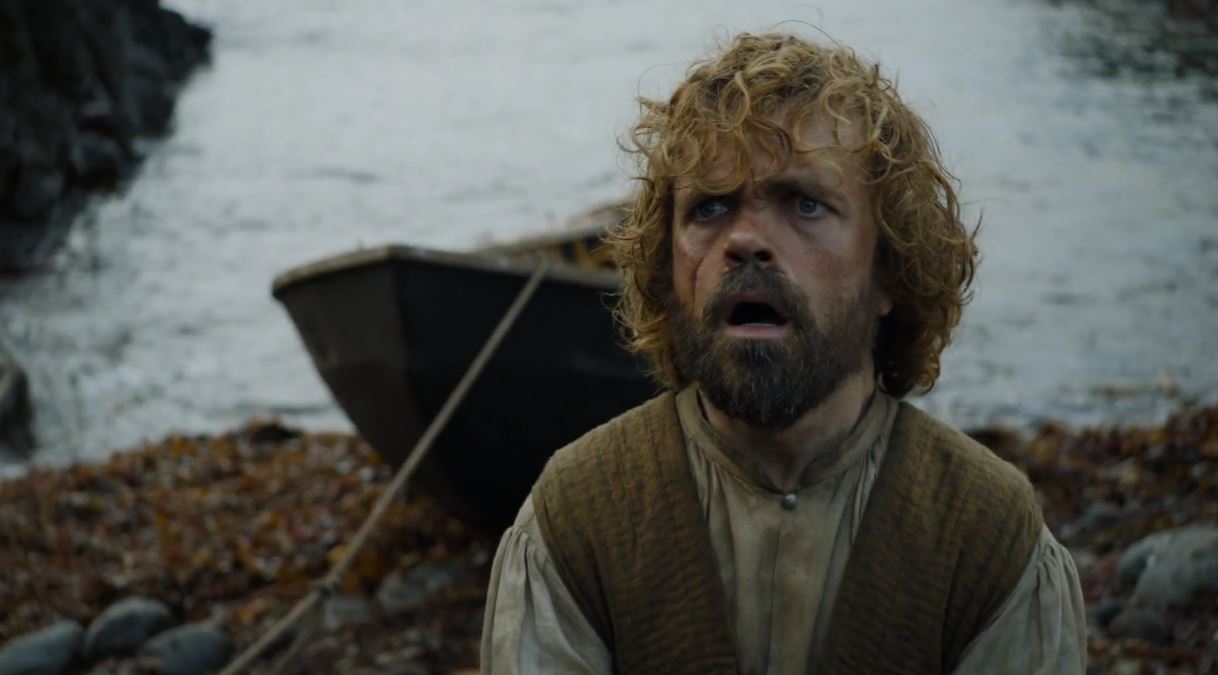 The “Sure, You Could Cut Off My Magical Penis and Bring It to Your Cock Merchant. But Unless It’s Attached to Me, How Will He Know It’s From a Dwarf?” 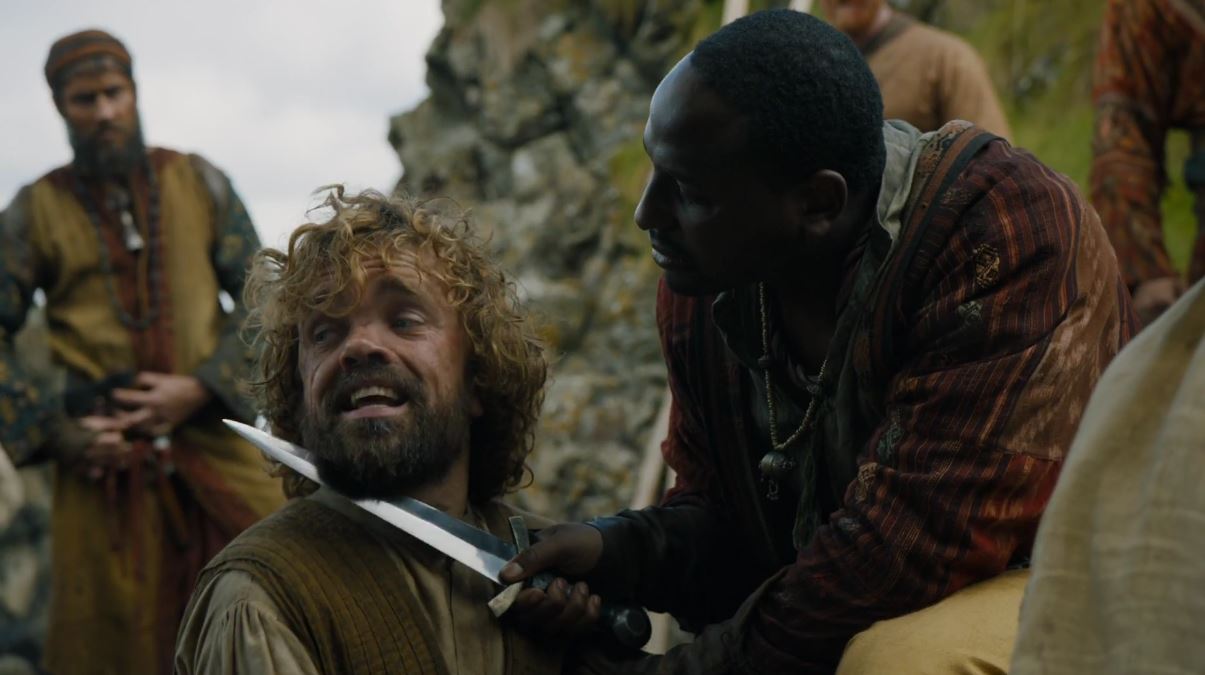 The “What I’m Saying Is That My Magical Penis Is Huge. Why Don’t You See What My Pal Admiral Friend Zone Over Here Is Packing? It’s Probably Tiny and Withered From Atrophy” 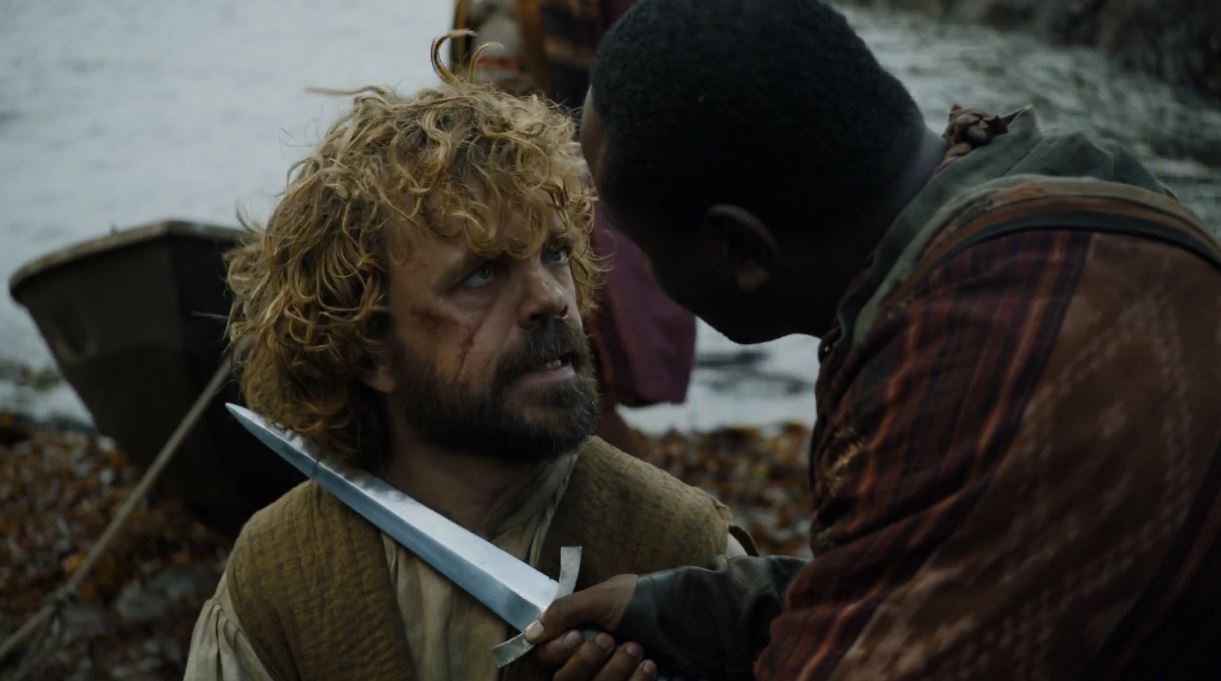 The “The Dwarf With the Giant Magical Penis Has a Point. Let’s See the Merchandise.” 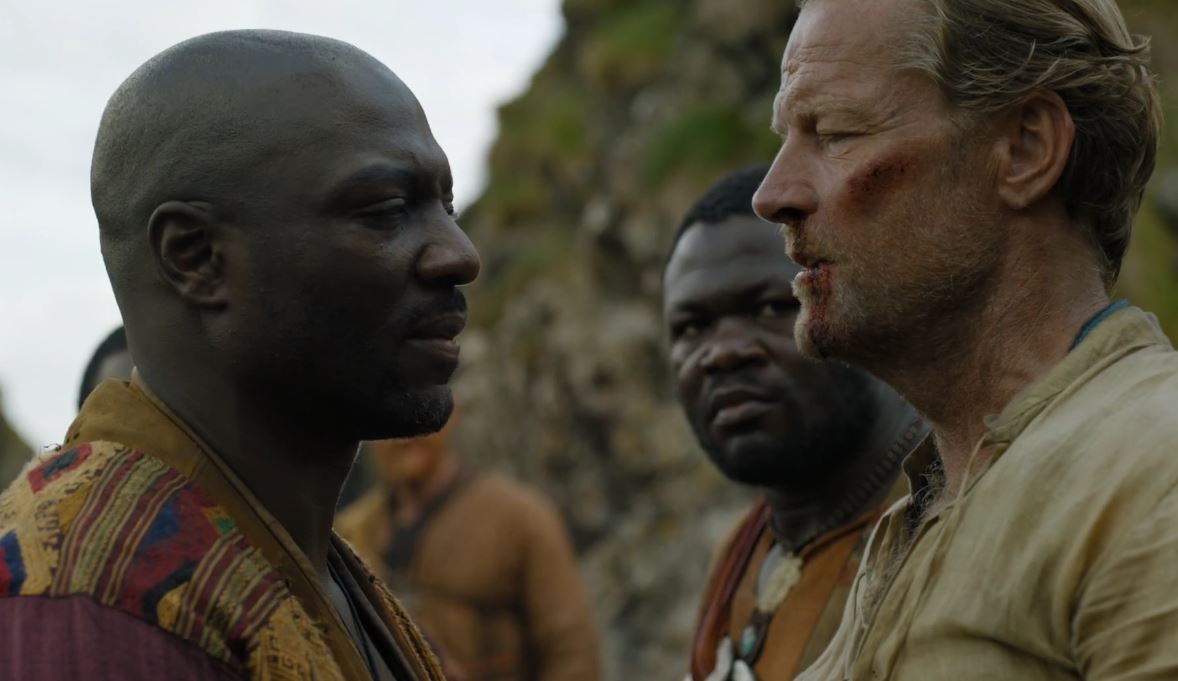 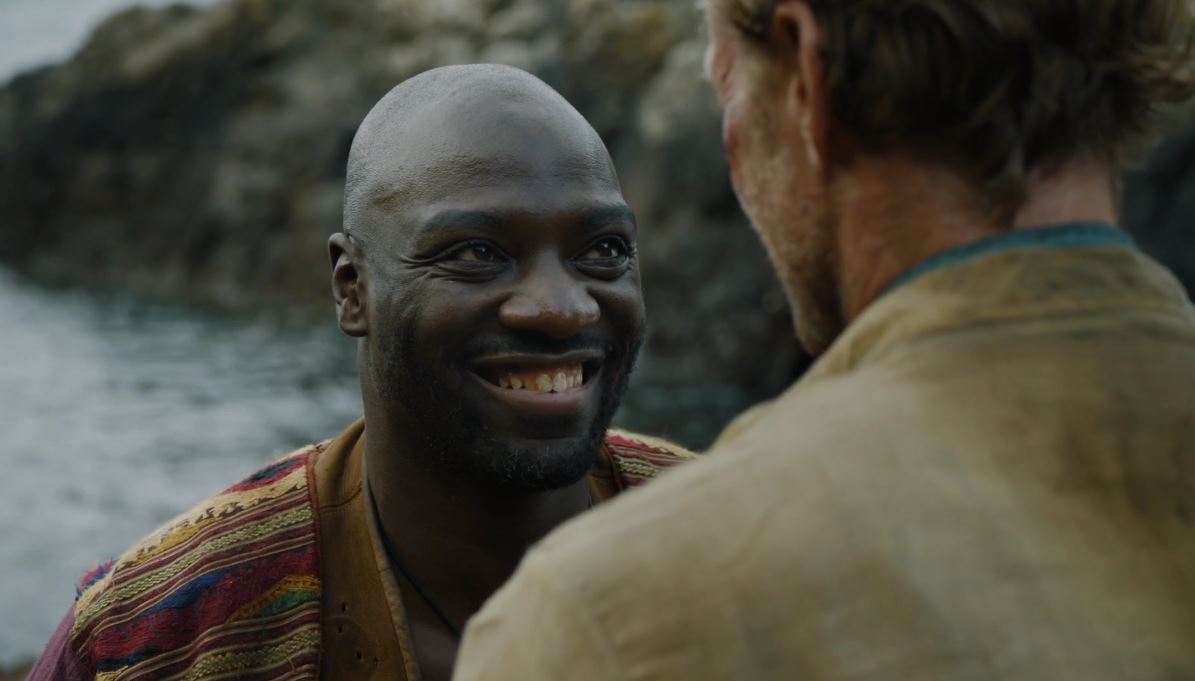 Intermission: Game of Pipes: You Squeeze and Blow or You Die

FROM THE DESK OF CERSEI LANNISTER, QUEEN REGENT QUEEN MOTHER QUEEN OF THE SEVEN KINGDOMS:

Things to Think About

Things Not to Think About

Low point: Tie between Roose Bolton’s betrayal and Lady Olenna not noticing that my line about veiled threats was a joke about the veil she’s always wearing.

John Lopez: Fair enough: Jaime and Bronn playing Rosencrantz and Guildenstern across the Dornish countryside isn’t the highest priority when you have 2,000-plus fantasy-novel pages to squeeze into 10 hours of TV. But I suffered narrative whiplash with how fast Westeros’s newest odd couple broke into the Water Gardens just in time to tussle with the Sand Snakes. I mean, we get three episodes of Jaime and Bronn musing against scenic backdrops and then, boom, they just walk into this highly guarded palace without even a Jedi mind trick? This screams lost opportunity. Just think of the possibilities:

The Michael Mann Heist: Jaime and Bronn set up shop in Sunspear and recruit Dorne’s most notorious criminals to plan their epic job. Over the course of several months, they meticulously case the Water Gardens and covertly assemble the state-of-the-art equipment (you know, Valyrian steel shovels and whatever) they’ll need to dig an elaborate tunnel directly to Myrcella’s bedroom. However, the heist almost goes awry when Bronn falls for an emotionally broken Sand Snake and spills the whole plan. Bronn must choose: the mission and the money, or his one true shot at love.

The Foodie Rom-Com: Jaime and Bronn establish new identities as mysterious celebrity chefs whose mastery of traditional Dornish seaside cooking enthralls all of Sunspear. Eventually, news of their rustic-yet-complex cuisine reaches the Water Gardens and they are invited to cook for Prince Martell himself. But once Jaime manages to sneak Myrcella out in a chafing dish, she confronts him with a simple question: Isn’t this the most alive he’s ever felt? Doesn’t this fill the hole where his hand used to be? Realizing she’s right, Jaime leaves Myrcella to her beloved, goes back to King’s Landing, and confronts Cersei about her issues before announcing his plans to open King’s Landing’s best high-end mutton shop. Cersei kills him.

The Indie Dramedy: An old buddy of Bronn’s helps the two get night guard jobs on the outer walls of the Water Gardens so they can plan Myrcella’s rescue. Instead, the long nights provoke some honest, probing conversations. Bronn admits his guilt that he didn’t stand by Tyrion when it counted; meanwhile, Jaime questions his own incestuous relationship with his sister and the deep feelings of inadequacy Tywin left him with. Finally, they get their chance, but when Jaime sees how happy Myrcella is, both he and Bronn walk away, realizing it’s time to move on. Cersei kills them both.