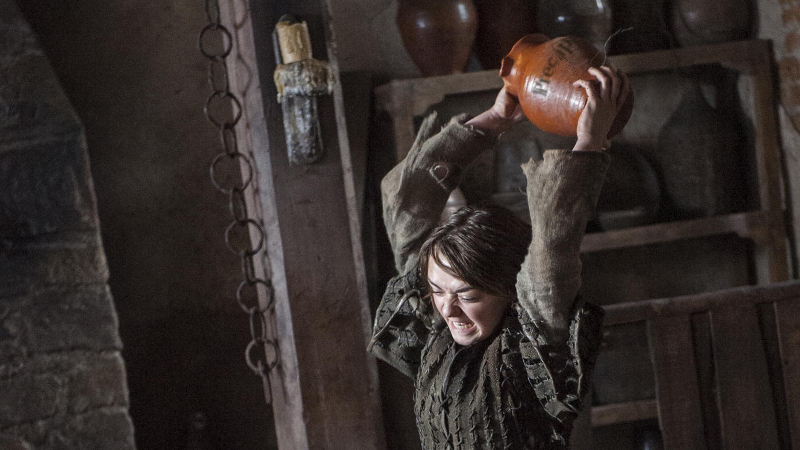 A Game of Swords

Andy Greenwald: Last week, Twyin Lannister got his smelt on, turning Ned Stark’s giant Valyrian steel sword into two smaller swords. One of those “freshly forged” blades went straight into Jaime Lannister’s left hand. The other? It remains to be seen. Below are the current odds — as determined by “making it up” — as to who will be the beneficiary of Tywin’s imminent metal munificence.

ROOSE BOLTON: First the North, then a special sword? As they say in King’s Landing: Get a room! Odds: 6/1

PODRICK: Like he has need for a smaller sword. Odds: 25/1

ZYGILF: This is a character I just made up to see if you were paying attention. Odds: 99/1

GHOST: Pros: How cool would it be to see Tywin secretly bonding with Jon Snow’s direwolf? Cons: Ghost is literally an animal. He has no opposable thumbs and thus cannot use a sword. Odds: 200/1

netw3rk: In Andy’s recap of the Season 4 premiere, he described how the seasoned journalists attending the screening with him erupted in cheers as Arya ran Needle through Polliver’s Adam’s apple. I experienced the same audience reaction when I went to the live fan screening at the Barclays Center. It’s a testament to George R.R. Martin’s abilities as a storyteller, and D.B. Weiss and David Benioff’s eye for which elements of that story are essential, that otherwise sane, gainfully employed people can get lost in a world that is so thoroughly fucked up.

Just talking or writing about things that happen in this show makes you seem — to the uninitiated — like a total sociopath. The most traditional example of unconditional love in Game of Thrones is Jaime giving up his birthright as heir to Casterly Rock in order to keep sleeping with his twin sister and remain close to their inbred children. This is, like, a totally normal plot point. A preteen girl going on a revenge murder spree is greeted like the home team in a basketball game going on a run to cut into a big lead. I fist-pumped as the blood gurgled up out of Polliver’s mouth like water out of a stopped-up toilet. Ned, the most honorable and honest character in the show, was an inflexible fool who, in raising them with love, didn’t give his children the tools they needed to survive. I can’t be the only one rooting for Arya to go all buddy-road-movie with the Hound, who is a stone killer who ran down her childhood friend, the butcher’s son, in Season 1. At the sight of Ramsay Snow happily chomping on pork sausage while reminiscing about severing Theon’s, we finally recoil, but mostly because we just don’t understand why it’s happening. By all means, cut off a guy’s dick, just tell me why. Yet we never question why the other various murders, assaults, amputations, infanticides (by ice zombie and soldier), or other assorted horrors happen.

Personally, I would love to see the Lannisters, Freys, and Boltons writhing in pools of blood with various extremities cut off, perhaps at the hands of a preteen girl, or maybe charred black by dragon fire while armies of eunuch slaves hack at the remains. But that’s just the mark of an immersive fantasy story. It doesn’t mean I’m a sociopath. Right?

THAT BEING SAID, Is It Too Sociopath-y to Want These Nice Kids to Work Things Out? No, Right? Right?

Killing’s the sweetest thing there is … aside from this pair, who make murder look as cool as a Frostfangs breeze. She wants him dead, and he wants to sell her, which is a pretty fucked-up foundation for a relationship, but also probably a lesson to the rest of us: Be honest with your partner, and you’ll find common ground — especially if that ground is made of stolen pigs’ feet, crazy-uncomfortable pedophilia jokes, and a really large pile of dead bodies. The family that slays together stays together.

Odd Couple Words: Tastes Like Chicken (Or Is That Blood? Yeah, Actually, That Tastes Like Blood. Oh Gods. I’m Dying. Who Stabbed Me in the Neck?)

Before these two became begrudging besties, they talked some serious smack. He called her ugly and beastly and asked if she had sex with horses. She called him oath-breaker and Kingslayer and dropped the ultimate oh no you did’n with this gem: “Maybe you were as good as people said … once. Or maybe people just love to overpraise a famous name.” Grade! A! Knight! Trash! Talk! And then the prisoner saved his jailer, and saved her again. Jaime lost a hand, but he gained a lifelong pal. Did the friggin’ Sword of the Morning get to write anything as darling as that in the Kingsguard White Book, Joffrey? Did he?

Odd Couple Sigil: A bear, a bear, all covered in hair

As a book reader, it pains me to rank this pairing so high, because, well, these two aren’t paired in The Text: Arya serves as Roose Bolton’s cupbearer at Harrenhal, not Tywin’s. But credit Lord Commanders Benioff and Weiss for recognizing that the only thing sharper than Arya’s sword or Tywin’s quill is the interplay these characters would share. When Arya wasn’t trying to stick a mutton knife in Tywin’s neck and Tywin wasn’t penning letters designed to get Arya’s entire family killed, these two were gabbing away like a couple of old brothel hens. Jokes about The Mountain being a mean drunk? Check. Dragon-lore story time? Obviously. Grammar lessons? You bet. I probably wouldn’t have used a genie kill on Tywin, either.

Odd Couple Words: A Cut Above

This friendship shouldn’t work, but it does, and oh so well. Tyrion is the wealthy son of a noble lord; Bronn is the son of “you wouldn’t know him.” Tyrion pays other men to fight; Bronn made his living as a sellsword before becoming a knight. These two have nothing in common. Well, nothing save a deep and abiding love for women, booze, and staying alive. They cut the tension with boner jokes, and they look for a full cup before a fight and a full bed after. And remember: “Just because I pay you for your services doesn’t diminish our friendship!”

Sam has never been with a girl. He’s so innocent that he probably needed to change his underthings after hearing Jon talk about Ros’s ample bosom. And he’s a sworn brother of the Night’s Watch, which means that even if he found the courage to touch a girl, he’d lose one of his heads for trying. Gilly is a woman of the world. She’s seen things … namely, her father/husband’s penis. Sam is well read; Gilly thinks Sam’s a wizard because he can learn things from “staring at marks on paper.” If these two ever get around to bumping (filthy, freezing) uglies, they’ll probably try to use the gifted thimble as a condom.

Jaime and Cersei: The only thing more odd than twincest is the fact that we’ve grown comfortable enough with brother-sister boinking to leave this pairing out of the top five. Says more about us than them, really.

Tyrion and Sansa: Let’s see: His nephew killed her father; his father killed her brother and mother; his sister killed her wolf; his everything killed her libido; his whore/lover/bestie empties her chamber pot … and now they’re married. Couples Therapy producers, we’ve found your Season 5 stars. 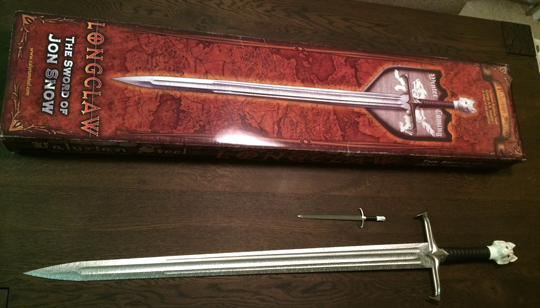 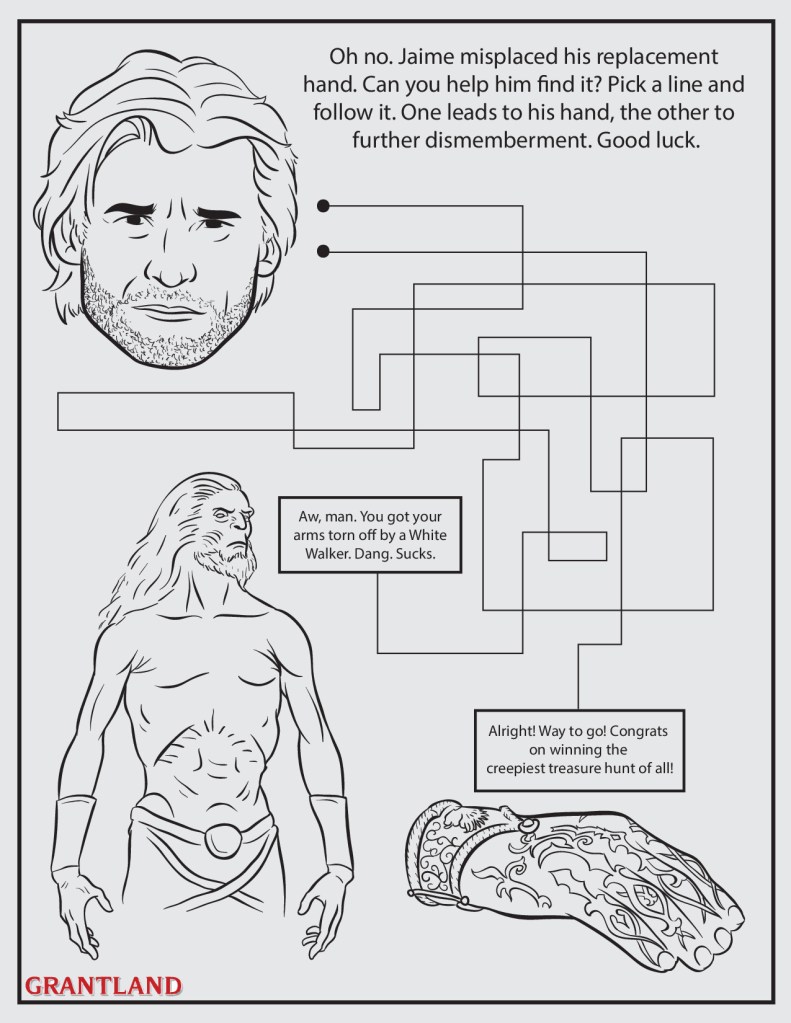 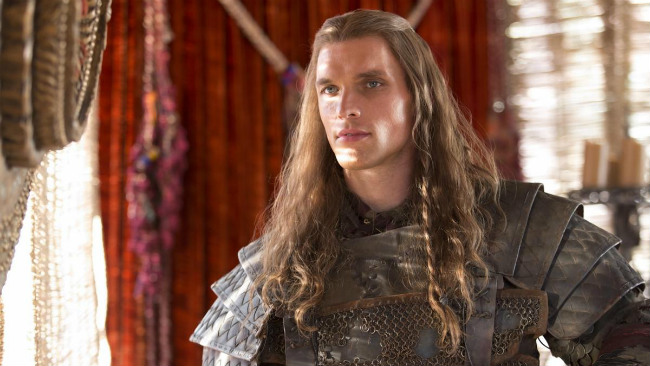 He’s right, you know. When was the last time you saw Tywin Lannister, the richest man in Westeros, make love to anything? It’s possible that in one of his offscreen moments, Tywin takes a sensual Scrooge McRaven swim through his massive gold hoard, paddling with erotic abandon through an ocean of shimmering coins and gem-encrusted goblets, and then luxuriates upon his beloved signing-threatening-scrolls table, thrusting his feather pen into a quivering inkwell over and over again, exhaling heavily as he imagines someone in a far-off place taking their last breath at his command. But that’s as close as we can come to imagining the Hand of the King indulging that part of himself. That pen is for business, not pleasure.

But Old Daario gets it.

Old Daario shows up while the Mother of Dragons is having a soak and pledges his fealty to her fire-defying beauty. Don’t believe him because he slipped into the royal bathing chamber wearing an Unsullied uniform and held a knife to your translator’s throat? He’ll prove his devotion with a burlap sack full of murderous conspirators’ heads and a lascivious smirk that says, “I’d kill a dozen more men if that’s what it takes to get in that tub.”

I miss Old Daario already. New Daario’s all about flowers and playing silly sword games with eunuchs. I bet he even tries to write her a song.

Goodbye forever, Old D. They can never recast you in our hearts.

Presented Without Commentary on a Nation’s Misguided Taste
in Baby Names Because, Come on, Just Name Them Daenerys; ‘Khaleesi’ Is Ridiculous 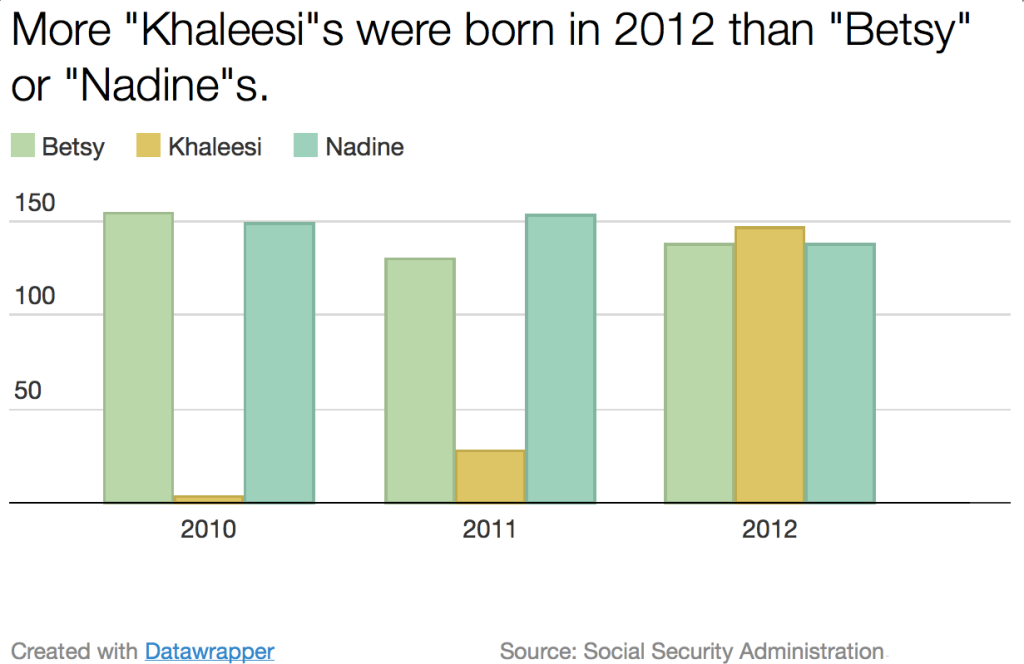 Before Game of Thrones, no one named babies “Khaleesi.” In 2012, it beat the name “Betsy.”

John Lopez: “In search of chicken here worth gutting a man from groin to neck for.”

Considered almost an unofficial House of Westeros by some for its legendary chicken-and-waffle combo. Meh. The Hound likes his chicken simple. Frankly, the lines are too long, and at prices not even a Lannister could abide! Still, the Hound couldn’t stop wrapping the giblets in that syrupy carb-loaded goodness, even if the indigestion after was worse than a hot iron to the face.

Rating: One and a half dead henchmen

What’s more precious than Valyrian steel? Valyrian chicken: salt, garlic — and plenty of it. It’s these simple recipes the Hound appreciates. It stayed the Hound’s hand from slicing the impudent serving wench when she charged for an extra garlic sauce. Unfortunately, the puny chairs could not bear the Hound’s weight, especially after three whole chickens. The Hound was embarrassed until he slew all onlookers.

Honey and chicken! Just like the Hound’s mother used to make. The meat is succulent, and it’s all hands here: knives and forks not welcome! (Even if The Hound knew what a fork was.) And no knavish limits on the amount of honeyed sauce one is allowed. But would it kill them to keep extra napkins handy? The Hound almost did! Still, the Hound would definitely come back here.

You Bleat or You Die. Take Us Home, Goats.

Filed Under: TV, Game of Thrones

Video on Demand Report: 'Desolation of Smaug' Arrives on VOD, Everyone Yawns