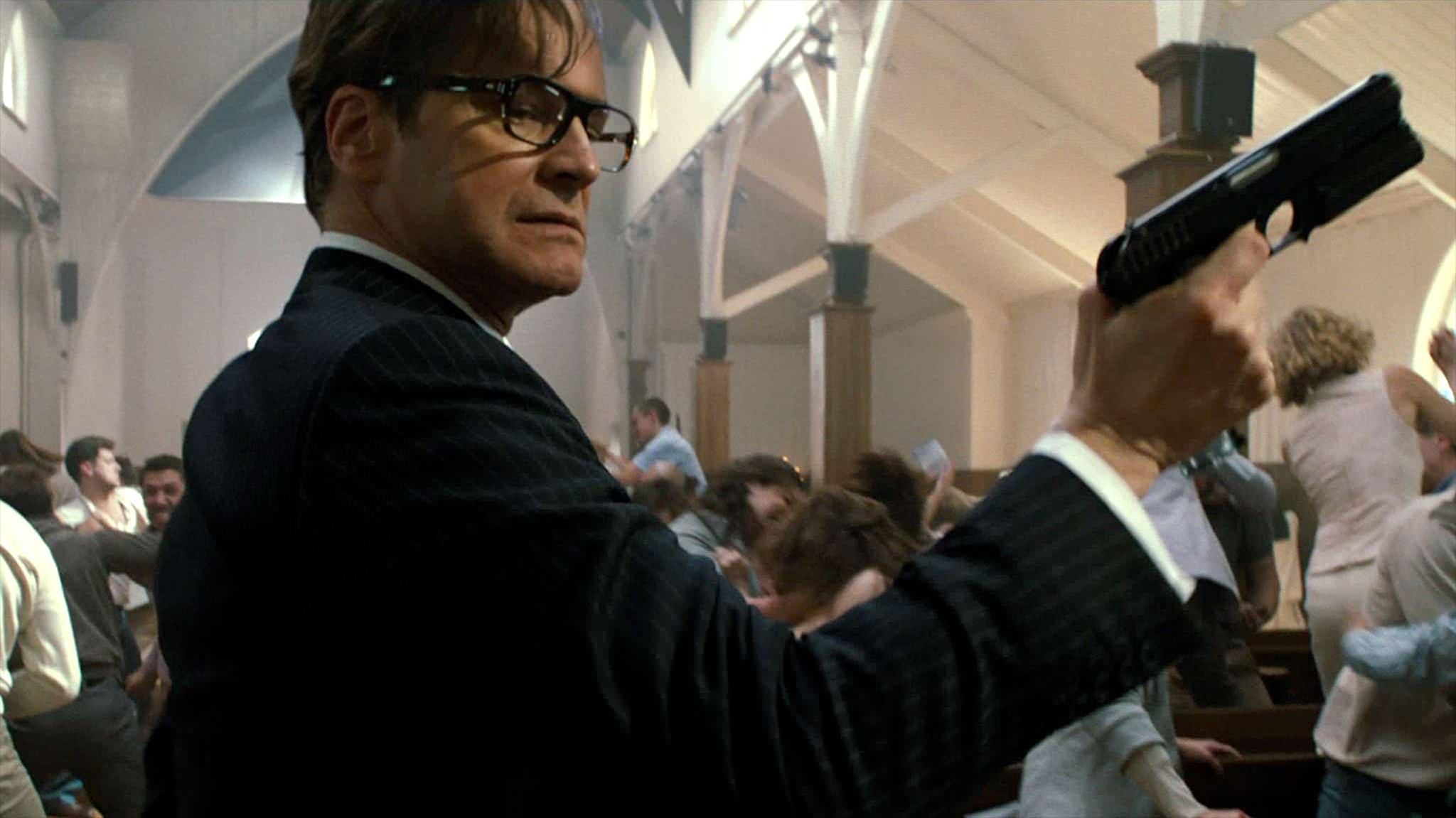 Here’s a scenario: Having forgotten to set your alarm clock, the kind with two bells on the top and a perfectly round face, you awake from a decades-long catnap a little worse for wear grooming-wise but otherwise A-OK. You’re now desperate to reconnect with the culture you fell behind in your oversleep. You and your now much older friends, who are all married and kid-saddled and very surprised to see you, make plans to go see Kingsman: The Secret Service, Matthew Vaughn’s hysterical new action movie.

Afterward, as you sit in a bar and discuss the movie and drink Miller High Life — some things should never change — you say to your friends, “Wow, that Colin Firth guy: He must be, like, the British Harrison Ford!” Imagine your surprise when your best buddy, looking morose and extremely confused, tells you that the character Firth is most closely associated with is … Mr. Darcy.

This is the shock of Kingsman: watching Firth, the dashing British actor best known for playing romantic foil to the unseen and undersexed, take on the part of a borderline sociopathic superspy, and not only conduct himself impressively but actually be the best part, by far, of the film.

He preens, makes jokes, and accumulates a body count that can be measured only with imaginary numbers; he uses an umbrella like Jason Bourne wields a ballpoint pen. After seeing Kingsman, memories of Firth’s Bond movies, which never happened, will come rushing into your head. Somewhere, in a mirror, Daniel Craig will watch his body fade, shimmering, into the void.

Many surprise performances demand to be considered for how different they are from the bulk of an actor’s other work, like Adam Sandler in Punch-Drunk Love or Ralph Fiennes in The Grand Budapest Hotel. Firth’s turn as Harry Hart is so smooth and somehow right that it makes his past work fall in line.

In fact, this isn’t the first appearance of Badass Colin Firth. While there have been glimpses of killer instinct and steely cool in films like A Single Man, most of Firth’s work has been characterized by the betrayal of that instinct, or else its repression, A Single Man included. Strangely for a male actor, particularly an Academy Award winner, Firth’s function is often to be objectified: Women desire him for his conventional or unconventional attractiveness, his debonair or odd charm. But there’s always a hidden layer. Even in The King’s Speech, Tom Hooper’s final project for Biopics 101, Firth infuses the stuttering King George VI with a certain latent danger; it’s what makes the movie more than a nice-looking Upworthy post.

Where the potential for Kingsman first shows itself, though, is in 2011’s Tinker Tailor Soldier Spy, Tomas Alfredson’s masterful adaptation of John le Carré. Firth plays Bill Haydon, one of the four men being investigated by Gary Oldman’s George Smiley as a possible mole at the top of the British intelligence agency. It’s a revelation: While Firth previously played his characters as flesh hidden by skin, always more depth to be explored, Haydon is a whirling cocksure bastard, a brash and philandering cipher. In one crushing scene, when Smiley walks in on him in a compromising situation, Haydon greets him with a posture so erect that he looks taxidermied, his arrogance in full display. Meanwhile, underneath the table, Alfredson shows us Firth’s red-socked feet scrambling to fit themselves into unlaced desert boots.

Although his role in Tinker Tailor Soldier Spy might not call for Firth to massacre a church full of bigots, it still demands from him feats of hubris and cool surpassing Bondian heights. In a supporting role, he must be the consummate British rogue, the gentleman spymaster — and there’s no easy refuge in convenient women.

Kingsman may invoke the name of Bond explicitly, but it’s at least a little bit posturing, like a college freshman blasting the Sex Pistols with his door wide open. If no other action movies had ever been made, Kingsman would be the best action movie ever made: It’s creative and hugely entertaining, and yet if you put it next to something like Kill Bill or Drive — or last year’s gold standards for mainstream action, The Guest, John Wick, and Edge of Tomorrow — it seems almost like parody.

What doesn’t wilt is Firth, who’s the real deal as a centerpiece. Considering how Tinker is the vastly better film, it’s fascinating how Kingsman is the one that finally shows Firth as a complete leading man. This may seem silly: He’s an Oscar winner, after all, a guy who defines a certain vision of English masculinity. But an Oscar is not a mandate. Compare Benedict Cumberbatch and Eddie Redmayne, Best Actor nominees as the two anchors of this year’s King’s Speech equivalents. Cumberbatch could lead a silent rom-com about Trappist monks and you’d be like, “I’m there, opening night, wearing a robe.” I’m still only half-sure what Redmayne’s real voice sounds like. With Tinker Tailor Soldier Spy, Firth demonstrated that he could threaten as well as seduce and inspire. With Kingsman, Firth put movies on a poster.

Fight Club: Catching a Beating at the Super Bowl of ‘Super Smash Bros.’