First Aid Kit and the Beautiful Assimilation of Swedish Pop 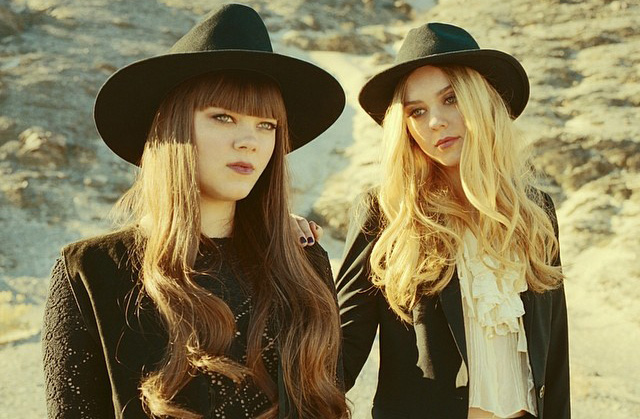 What’s most striking about hearing First Aid Kit for the first time are the harmonies. The blend of Klara and Johanna Söderberg’s piercing voices is one of the most arresting sounds in contemporary music. Full of resolve yet vulnerable, occasionally overpowering but never hectoring, and always effortlessly beautiful, the combined effect of these two singers could make Slayer lyrics ring out like holy texts.

The folk duo’s breakthrough sophomore effort, 2012’s The Lion’s Roar, put the group solidly in the nü-folk camp spearheaded by commercial juggernauts like Mumford & Sons and the Lumineers. (The Lion’s Roar moved a respectable 250,000 units worldwide.) But while the Söderbergs’ soaring, tightly interwoven voices once again evoke the melancholy twang of the Carter Family or the Louvin Brothers, on the forthcoming Stay Gold (due out June 10), the spotless perfection of First Aid Kit’s traditionalist Americana subtly hints at the mass-market pop heritage of the sisters’ home country, Sweden.

This, by the way, is the second most immediately striking aspect of First Aid Kit: It’s a Swedish group that seems (at least superficially) remarkably un-Swedish. Given the “authenticity” baggage inevitably affixed to acoustic music commonly associated with trains, prisons, and alcoholic hobos, the prospect of two young women from Stockholm working in an intrinsically American musical style while singing in perfect American accents seems a little weird. Stay Gold is plainly positioned as an “honest” and “personal” record, with the lyrics alluding to the usual problems of the hard-touring musician — namely, romantic hardships and a perpetual sense of dislocation. But the presentation of Stay Gold is just as obviously fabricated. For instance, one of Stay Gold’s best tracks is “The Waitress Song,” which opens with 21-year-old Klara (who normally assumes lead-vocal duties) singing the following lyrics over a hearty camp-counselor strum:

“I could move to a small town and become a waitress / Say my name was Stacy and I was figuring things out.”

Listening to “The Waitress Song,” I couldn’t help but wonder: Was this song written in Swedish and then translated into English? Is the small town supposed to be in Iowa or is it a village near a majestic fjord? Isn’t it weird that she says her name is “Stacy” and not Sigrid or Majken? Then I lost my train of thought, because what I was hearing sounded so damn gorgeous that it scarcely seemed to matter.

“One thing we would really love to do is try to write a song in Swedish. It’s just really tough,” Johanna, 23, told me last week over Skype. She and Klara were holding court at a Stockholm television studio where they had just done another interview to promote Stay Gold. “I think a lot of Swedish artists agree with us, because a lot of Swedish artists sing in English — I think, a majority of them. It just feels like you’re very exposed [when singing in Swedish]. It’s so private and personal and naked.”

“English was the language of all our role models,” Klara offered. “It’s kind of like you’re this other persona, although you are still yourself. We strive for honesty in our music.”

“We’re ourselves, but we’re also another version, kind of,” Johanna concluded. “Our stage banter is much better in the U.S. than in Sweden. Which is weird, because it’s usually the other way. But yeah, we are more confident in English onstage. Even in interviews. I don’t know why.”

As their vocals go, so go Johanna’s and Klara’s speaking voices — in conversation, they sound more like Southern Californians than southeastern Swedes. The Söderbergs credit this with attending an English-only school in suburban Stockholm for several years and “obsessively watching” American television shows like The Simpsons, Charmed, and Sabrina, the Teenage Witch. As children, they of course listened to ABBA, as well as the contemporary hits that Swedish super-producer Max Martin wrote for Britney Spears. But when Klara was 12, she fell hard for the song “First Day of My Life” by Bright Eyes, which put her on a new path.

“I think a lot of the music that I heard in the past was this very produced thing where you had to be this kind of intangible object, that you wanted to be desired or whatever,” Klara said. “Then there was this person who was just like, ‘Hey, it’s just me. I’m here on my guitar, singing these songs.’”

“It wasn’t perfect, it wasn’t polished,” added Johanna. “We felt like, ‘Oh, we can do this, because we don’t need a producer or lots of people around us, or an image.’ We could just pick up a guitar and start doing it.”

Conor Oberst went from being a personal hero to a colleague when the Söderbergs met the singer-songwriter, along with Bright Eyes band member/producer Mike Mogis, through First Aid Kit’s label, the London-based Wichita Records, after the release of the duo’s 2010 debut LP, The Big Black & Blue. Mogis eventually stepped in as First Aid Kit’s new producer and invited the Söderbergs to record at his home base in Omaha. (First Aid Kit is also prominently featured on Oberst’s forthcoming record, Upside Down Mountain.)

After recording Stay Gold in Nebraska, Klara and Johanna lived there for two months, the longest they’ve ever spent in one place in the U.S. and the closest they’ve come to actually living the life they’ve heard depicted in so many of their favorite songs.

“We didn’t rent a car at first, so we walked everywhere and people just kind of stared at us. It was just us and the homeless walking,” Johanna recalled. “It was really sad. We didn’t see anyone on a bicycle — one person, I think, which was weird.”

'The Americans' has been renewed for a third season. Reminder: You should be watching this show.

What’s It Take to Stump the Amazing ‘The Office’ Video Clip Stare Machine?