Fall TV Preview: The CW Is on the Right Path, But Still Debuts the Worst Show of the New Season 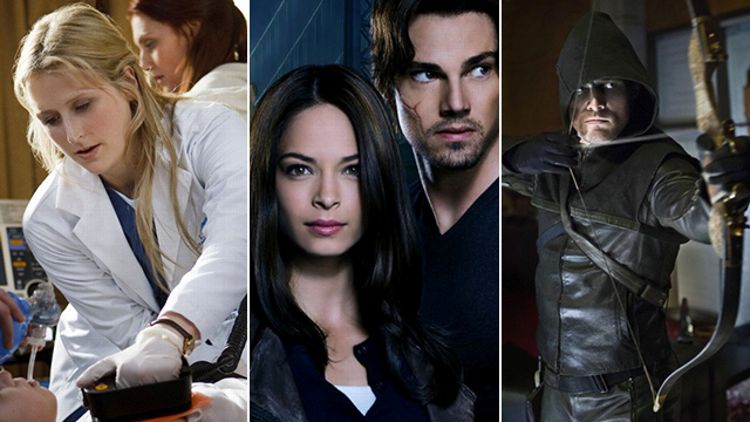 Earlier this year, on the heels of the lowest-rated drama debut in television history, I asked a relatively straightforward question: Is the CW even a network anymore? Harsh, yes, but not entirely unwarranted. At times it seemed that the broadcaster — cobbled together six years ago out of the froggy bones of the WB and its rival UPN — was less a commercially viable competitor to the traditional Big Four and more of a very public investigation into the possibilities of absolute zero. In June, the second half of a rerun of the putatively youth-oriented net’s retread 90210 garnered a 0.0 rating in the much-coveted 18–49 demographic, a number roughly on par with Mitt Romney’s projected percentage of the African American vote and my level of surprise when I learned that the CW’s most-watched show this summer was an “extreme” version of musical chairs hosted by Jamie Kennedy. Even the formerly zeitgeist-y Gossip Girl — now entering its sixth and final season as a world-weary Gossip Woman — only averaged a little over a measly million viewers per original episode. For those counting at home, or in Greendale, that’s one-fourth the audience of a mid-winter installment of the permanently beleaguered Community. So I ask again: If a tree fell in the woods on the CW — assuming the tree was underage, sipping an appletini, and listening to Sky Ferreira — would anybody even see it?

Cratering ratings aren’t the only concern for entertainment president Mark Pedowitz as he enters his first full season in charge. ABC Family has been staging a fairly aggressive theft of Pedowitz’s lunch money with juicy, juvie indulgences like Pretty Little Liars  — a show that manages the neat trick of being both younger and bitchier than anything bedded by Chuck Bass. Niche programming — even a niche as potentially broad as “youth” — tends to play better on cable, where bottom lines are lower and all boats are lifted by the plentiful, reliable tide known as subscribers’ fees. The challenge is compounded by the fact that the very demographic the CW is chasing is the one least likely to be caught, at least by traditional means. Young women aged 18–34 — and most likely those quite a bit younger — might very well be charmed by the actually quite charming Rachel Bilson in Hart of Dixie but they’re also liable to be watching it the way most non-CBS viewers watch television these days: online or time-shifted on their DVRs. Pedowitz has shored up his sinking fortunes via some savvy, multi-screen marketing moves (in the spring he licensed full seasons of many of his shows to content-starved Netflix and Hulu), but he’s still a bit like Jimmy Stewart in Harvey, constantly pointing to the presence of a giant, twentysomething rabbit that no one — at least no traditional metric — can quite see.

But let’s look past the numbers for a spell — Pedowitz’s bosses at CBS certainly do. Creatively, the CW might be in the best shape of its young life. Both campy and creepy, The Vampire Diaries doesn’t suck — and its ratings (close to 3 million viewers for the third season finale, if you account for time-shifting — and Pedowitz’s bosses at CBS certainly do!) are helping to stop the network’s overall bleeding. But there’s also evidence of a shift away from the sham shocks of GG and toward a more sweet and hopeful vein of storytelling, one that might offer an appeal beyond thrill-seeking adolescents and the pervy olds who tend to follow them. Canadian import The L.A. Complex — the aforementioned lowest-rated drama of all time — is actually quite decent, a rare aspirational hour that’s really more about failure than success (making its ratings seem more apt than sad). And when the gentle Hart of Dixie returns for a second season on October 2, it will be joined by the wifty but winning Emily Owens M.D., and in January, the Sex and the City prequel The Carrie Diaries. Also from Josh Schwartz’s teenage dream factory, Carrie is outrageously better than it needs to be, a Louboutin when many expected Payless (am I doing this right?). Starring the star-in-the-making AnnaSophia Robb, it manages to find the human heat beating underneath the poofy ‘80s shoulder pads. It could, and should, find an audience that, if not exactly Mr. Big, might well be Mr. Medium. One imagines it’s an outcome Pedowitz would happily take as he attempts something not even Carrie Bradshaw and her cosmo-swilling cronies could manage: maturing without ever getting old.

If Hart of Dixie is a classic Dr. Fish-Out-of-Water tale, then the terribly titled Emily Owens (formerly First Cut, which, in retrospect, sounds like it would make more sense on ABC Family) puts a similarly gamine physician squarely back in the pond. Like a Grey’s Junior Anatomy, Owens is about the titular heroine — the appealing Mamie Gummer — who discovers that her residency is basically just like high school all over again. Gummer may lack the dramatic gravitas of her mom, Meryl Streep, but she’s got the same ability to play befuddled while never being anything less than smart. And the (admirably diverse!) supporting cast is also spirited, particularly the gorgeous Aja Naomi King as a rival and Kelly McCreary as a potential pal. (Too bad about Justin Hartley, limp in the killer Clooney-in-ER role.) Fandom will depend on the ability to medically suspend one’s disbelief — as well as personal tolerance levels for professionals acting like children. But there are worse things to be hospitalized for — and the country mouse–city mouse scheduling with Dixie is graduate-level smart.

UNSCIENTIFIC PREDICTION: The prescription runs at least a season. If Gummer’s performance breaks out, refills may be in order.

You know, I get it. The approximately $100 billion (note: approximately) grossed by Christopher Nolan’s Batman movies proved there’s an audience for po-faced, gravel-voiced revenge fantasies. But not even financial considerations can excuse this D.O.A. stinker, in which DC’s iconic archer is rebooted as a humorless Brant Brother with as many scars on his buff body as targets on his kill list. Apparently, all it takes is a few years yacht-wrecked on an abandoned island to learn conversational Russian and, in Oliver Queen’s (Stephen Amell) own words, “forge myself into a weapon.” Too dark to be escapist and too hackneyed to be believed (“It looks like Starling City has a guardian angel!” enthuses an extra after Queen murders a bunch of people and extorts $40 million for charity), Arrow made me long for the mature, subtle storytelling of NBC’s not-at-all lamented The Cape.

UNSCIENTIFC PREDICTION: The quiver is empty by midseason.

The last thing I want to be is hyperbolic, but Beauty and the Beast, a loose “reimagining” of the marginally beloved ‘80s series, may well be the single worst television show I have ever seen. I’m not saying that to be cruel. In fact, like Baxter eating a wheel of cheese, I’m actually kind of impressed. This amateur hour stars the very lovely Kristin Kreuk as Catherine Chandler, New York City’s least-plausible cop. Chandler, along with her equally hot partner, Nina Lisandrello, patrols New York City’s least-plausible streets, most of which are very clearly in Toronto. Nine years earlier, Chandler’s mother was inexplicably gunned down before she was saved by Jay Ryan’s lupine Afghan war veteran. Now, he broods and howls (the goal is clearly Twilight, but his puppy-dog act wouldn’t qualify as dusk) while she … I mean, I can’t even get into it. She elbows dudes in the subway, wanders into people’s houses alone, and busts fashion interns because they have Saltines in their purse. Meanwhile, her equally handsome cop pals — they work at something called “SCU,” which I only know because it’s plastered on literally everything onscreen, like an overprotective mother with a fresh set of Fruit of the Looms — scribble case notes in neon markers and drink Chardonnay at fancy parties. “I’m not crazy,” Chandler says a the end of the pilot, “I was saved by a beast!” Honey, whatever it was, it couldn’t have been half as monstrous as this show.

UNSCIENTIFIC PREDICTION: I hope this runs for 100 seasons.

I can’t write about The Carrie Diaries because it’s not premiering until midseason but, you guys, it’s really good.