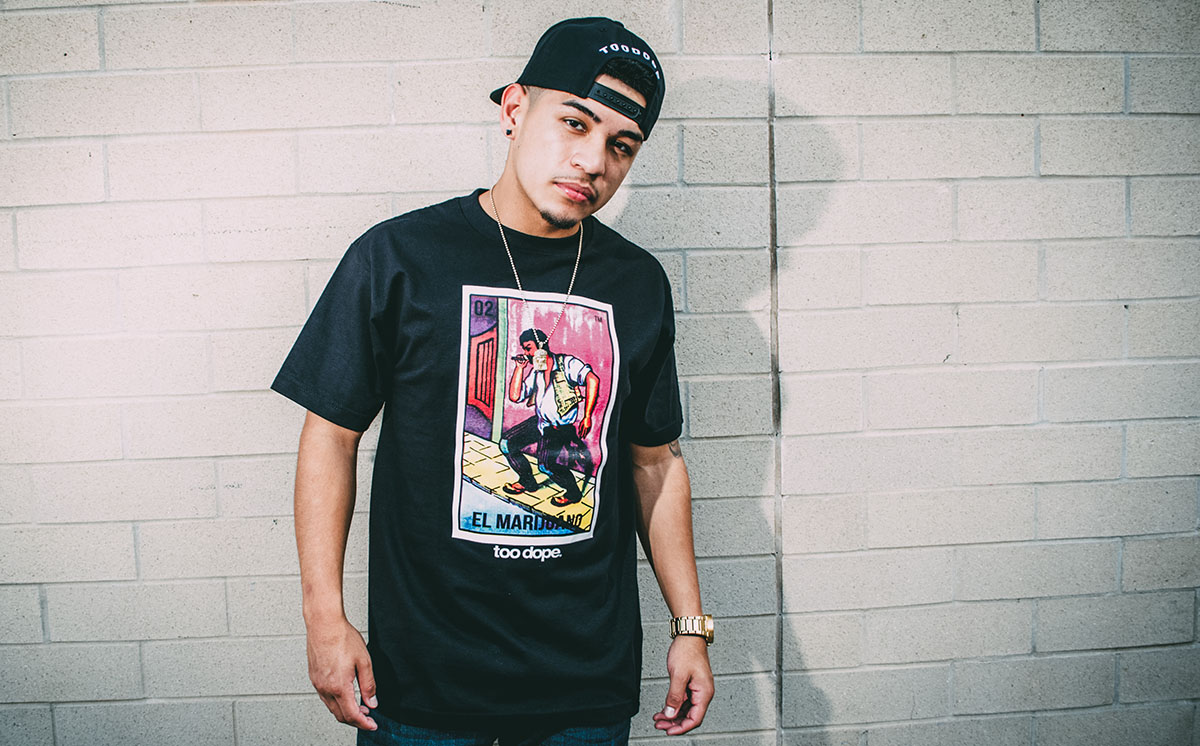 Doeman is a good rapper.

That’s not a sentence that is implicitly connected to race but it is one that will probably — at least for the predictable future in America, and definitely for the duration of this article — be inextricably tied to it. Because Doeman is Mexican American.

Doeman, who has lived all of his 20 years on earth in southeast Houston, is not the only rapper who is Latino.1 But he’s more interesting than all2 of them because he avoids some very common Mexican Rapper Problems:

The Juan Gotti Problem: Juan Gotti is a semipopular rapper in Texas. He’s important, in that he was one of the first to pull together Mexican heritage and tangle it up with hip-hop. His main problem is he’s actually not very good at rapping. His songs are always stilted and brick-shaped and drone together after a few moments.

The Baby Bash Problem: Oh, man. Baby Bash is the ultimate cornball. He raps things like, “So fly, like a dove, fly, like a raven.” And I think he might’ve actually had a perm. And he always looked so shiny. He was very successful for a very short amount of time but was always zero percent cool.

The Chingo Bling Problem: This is maybe the most prevalent, most important, most interesting concern. Chingo Bling is talented and he is cool-looking, but he appears to see the world only through green-, white-, and red-colored sunglasses. He is so far tucked into the corner that he effectively ostracizes most other races.3 This is not necessarily a bad thing. He has maintained a successful career doing just that, and he has created some truly transcendent art, most perfectly “Menudo” and “Bersace,” parodies of YG’s “My N​-​-​-​-, My N​-​-​-​-” and Migos’ “Versace.” But it’s a thing that allows his influence to stretch only as far as his arms reach.

This is Doeman’s most recent video. It came out last week. It’s for a song called “Andele’,” which would (seem to) imply that his heritage is the crux of his rap identity, or at least the crux of this particular song. It’s not, though. It’s just a word that made for a fun, sing-able hook.

Within its four minutes, he disassembles all three Mexican Rapper Problems.

The Juan Gotti Problem? Nope. Doeman is the opposite. This point makes itself clear after 10 or so seconds of listening to him. When he raps, his words come rifling out, structured in magnetic and intricate sentences, dipped in just enough snarl and hubris to make them exciting. And when he decides to slow them down, like he did for the chorus of “Jodeci” this past summer, they’re somehow even more alluring. They grow into each other as he stretches them out into copper wire. He allows each one to stand on its own juuuuust long enough so that it nearly falls over, then stacks another one up behind it as support, propping it steady. It’s a strange version of intriguing, like watching a wobbling coin that never quite spins itself out.

The Baby Bash Problem? Nope. Doeman has cool hair and cool eyebrows and cool posture and a cool origin story (he’s from a family of fighters — his brother is a professional boxer, and Doeman was spying a similar career but was hit by a car while walking to a Golden Gloves tournament), and his face is a normal amount of shiny, not a salamander’s amount of shiny. Being cool is a vital rapper stat, particularly in this case. Because think of the five coolest people on earth — I’m going to guess that zero of the people you thought of are Mexican.

The Chingo Bling Problem? Nope. Doeman, a fifth-generation Mexican American, avoids this pitfall, too. Two specific parts to point out from the video and one specific part from the conversation we had about it:

1. In the opening moments, that’s Doeman’s real-life father driving the truck and dropping him off at work. During their interaction, you’ll notice he refers to Doeman as “mijo,” which is a Spanish portmanteau (mi + hijo) for “son,” and then refers to him as “son,” which is English for “mijo.” Doeman doesn’t speak Spanish. His parents do, but he does not. This is not uncommon. Many Latino parents push for their children to assimilate into American culture as quickly and thoroughly as possible, and generally that involves attempting to establish English as the primary language. There are a ton of complicated reasons why this happens, but mostly they all spiral back to the same thing: It just makes things easier. School, work, shopping, ordering food anywhere but a taqueria; all of it is easier if your first instinct is to speak English. Rap is, too.

2. Notice the background characters? Almost all Mexican Americans, too. More specifically: Almost all young Mexican Americans; third-, fourth-, and fifth-generation kids with musical interests that tilt more toward Young Thug’s trap music than Gerardo Ortiz’s narcocorridos. We’re just now getting to the point where Latino teenagers have parents who were listening to rap and hip-hop in place of, say, Tejano music. So it’s a more organic connection to the music, which leads to a more organic sound, which leads to legitimacy. When Juan Gotti raps, you say, “That guy’s Mexican.” When Doeman raps, you say, “That guy’s Mexican?” That question mark makes a big difference. It’s complicated, saying that part of the reason a person is considered a good rapper is because he doesn’t sound Mexican, but it’s a version of a conversation that has been had in the young Latino community for years. It used to be derisive to describe someone as being “not Mexican enough.” Now, for some, it’s the inverse: Derision is being described as being “too Mexican.” Doeman directly addresses this in the song when he makes the claim, “I’m Pun and plus I’m SPM [South Park Mexican], they can’t believe I’m Mexican,” but also indirectly when he favorably compares himself to Mike Tyson (“I feel like Mike in the ’80s”), a Tupac character (“I’m Bishop from Juice”), Tupac in real life (“I’m ’Pac in his prime”), Nas (“I’m so ill with it; Illmatic”), a Wesley Snipes character (“Skin brown like Nino”), a Wood Harris character, and a Mekhi Phifer character (“Mama says you can be Ace or Mitch”).

When Doeman and I met up for an interview, basically all the questions I asked him were about this, about legitimacy and his ties to his culture and why there are more than 33 million Mexicans in the United States and only, like, five of them know how to rap.

We were together for a little more than an hour. This is the only part of the interview that matters:

Me: What generation Mexican are you?

Me: OK, here’s the thing: You grew up completely assimilated into, I guess “American culture” is the phrase. But you did so surrounded by other Latinos. The elementary and middle school where you went, those schools were almost exclusively Latino. They mirrored the neighborhood you grew up in, which was mostly second- and third-generation Mexicans, but also immigrants as well. But so you grew up there and all you’ve really ever known was American culture, specifically as it relates to the inner city, which is kind of a different way of saying “rap culture,” which is basically a branch of “black culture.” You and your friends, you all grew up like that.

Me: OK, so because of that, how much pressure do you feel to talk about or represent “being Mexican” or “being Latino”? Because in the “Andele’” video, you do it only obliquely. It’s not the premise, which is what I was expecting when I saw the title, but it’s not a sidebar, either. Is that something you actively work at and think about?

He just does it. And he does so without ever even considering that he’s doing it.

Q&A: Jeremy Renner on His Long Path to Stardom, Defusing Bar Fights, and His New Movie ‘Kill the Messenger’