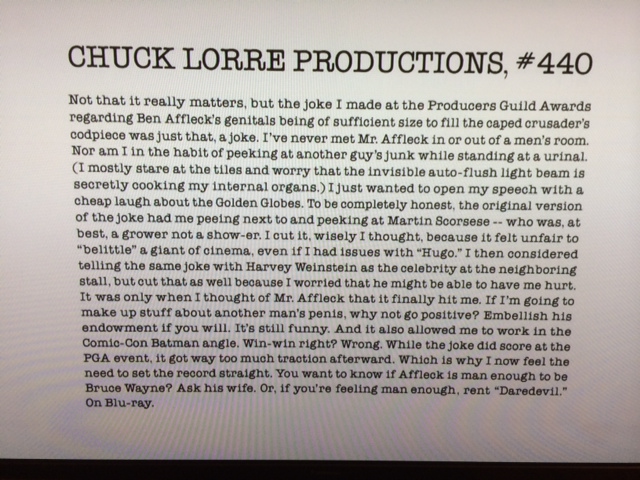 At the Producers Guild Awards last week, Two and a Half Men creator and Charlie Sheen bedeviller Chuck Lorre mentioned that he’d stolen a peek when standing next to Ben Affleck at a Golden Globes urinal and could confirm for the world that, yes, whatever Affleck was packing would be sufficient to stuff the Bat-codpiece. But the quip was picked up by the media and quickly snowballed on him — one imagines a life in which every single person he encountered would beg him for the details of what he saw, to reassure them that the genitalia was like nothing we’d ever seen on film — necessitating one of Lorre’s famous Vanity Cards after Mike & Molly last night to explain it was all just a joke. Read it for yourself and weep: Affleck’s junk, like virtually all important details of the Cut Crusader’s latest reimagining, remains a mystery cloaked in the yawning darkness, shrouded in shadows. And don’t try to sidle up to Affleck in the men’s room at the Oscars hoping to serve your own brand of vigilante penis-looking justice: He’s ready for you, and if he suspects you’re spying, he will release a disorienting swarm of hundreds of bats from the fly of his tuxedo pants.

And, truth be told, he keeps his dick in a cave deep below his Bel-Air mansion. You’re not getting in there. Only trusty butler Matt Damon knows where it is.

Just One of the Guys: 'Mitt' Attempts to Pull Back the Political Curtain

PSA: Nicolas Cage Has a Serious Movie Coming Out. It's Called 'Joe.'