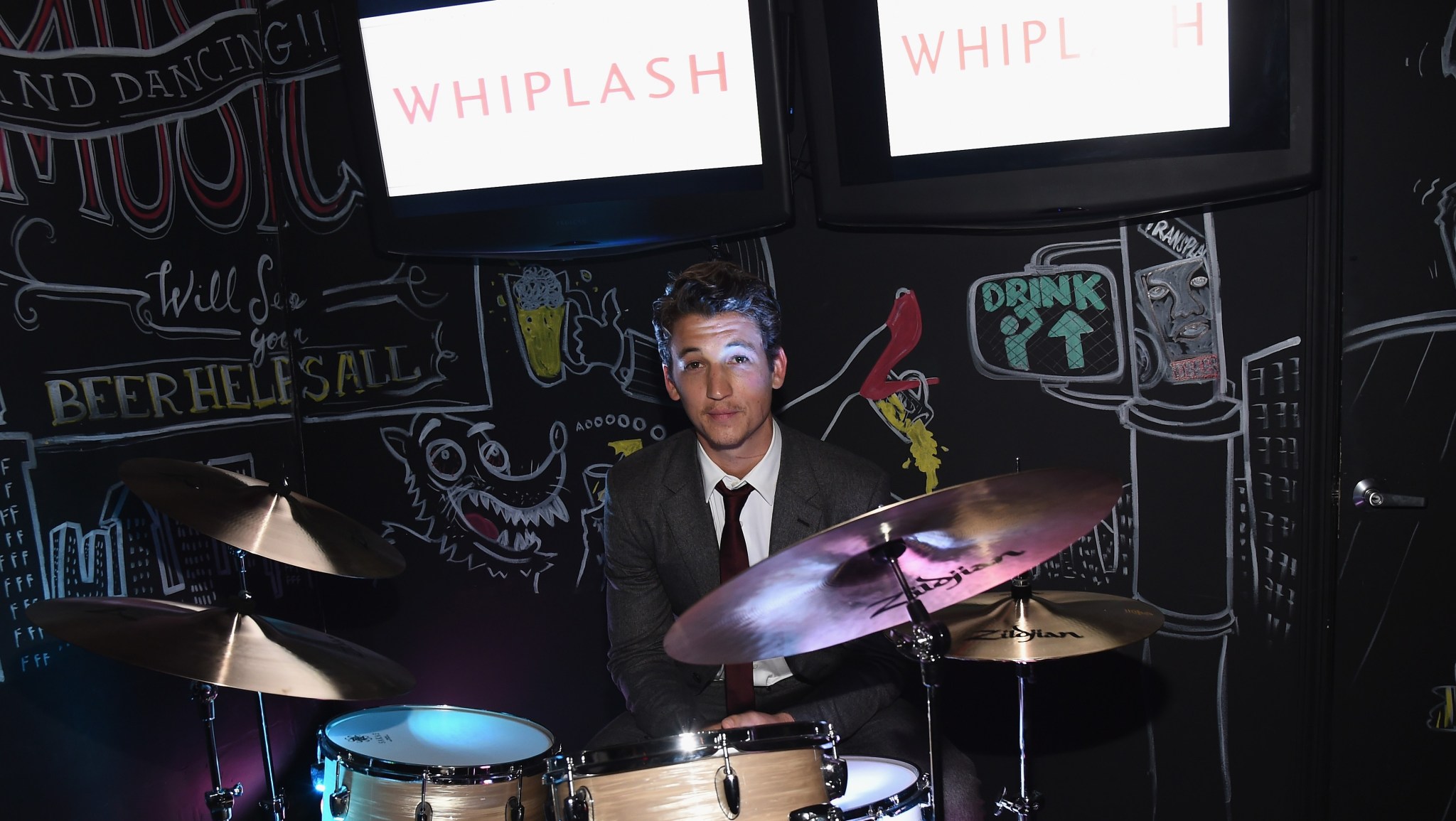 You know who’s hot right now? Miles Teller is hot right now. This week sees the release of Whiplash, which is a decisive turning point: After a series of tantalizingly promising roles, Teller has fulfilled all of that potential. (Seriously, go see that movie.) And who the hell knows how famous he’ll get next? Damien Chazelle, the director of Whiplash, calls Teller “the actor of his generation,” and he might just be right. So how’d we get here? A breakdown of the charmed ascent.

Part I: Out of the Rabbit Hole

All of our Oscar coverage!
With his first big role, the kid came out swinging. Rabbit Hole — adapted for the screen in 2010 by David Lindsay-Abaire, from his own 2005 Pulitzer-winning play — is still Teller’s heaviest dramatic work. Nicole Kidman stars as a mother wracked with grief after the death of her toddler; Teller is the young man who befriends her and offers her solace and is also, hoo boy, the guy who ran over her child. The lesson here: You’d wanna hang out with Miles Teller even if he’d done unspeakably horrible things to you and your loved ones.

Incidentally: Three years before Rabbit Hole, Teller got in a car accident that left many scars on his face. In 2007, he was driving with a few buddies to — ahem, ahem, ahem — a jam band festival!!! called the Gathering of the Vibes!!! when the car flipped a few times. He still has two rocks in his face, which he offered to let an L.A. Timesreporter confirm: “Do you want to feel? Some people get really excited by that.” We now know this to be a classic Teller move — take a serious moment and disarm it. Only a charmer such as he lets a stranger feel up his face. Also, he’s into jam bands. Noted.

Next: the Footloose remake. It was laughed out the room, but if you’re a true fan of that venerable subgenre known as the DUMB DANCE FLICK, it’s actually a serviceable-bordering-on-exceptional entrant. Amos (only semi-trollishly) spent much of 2011 shouting from the rooftops that it was his second-favorite movie of the year (second favorite because Rise 4-ever), and, with the swift ascent of Teller since, you know what, yeah, he does feel a bit vindicated for it. As Willard, Teller drops the hokeyness just a touch from Chris Penn’s take, instead letting that future-trademark chatty charm loose. It’s the shape of things to come. Let’s gooooo.

Part II: All the Right Moves

In 2012, for some reason, Teller cameoed in Project X? Maybe because he really wanted to dance more? (On an important side note: The love David Jacoby has for Project X actually might exceed the love he has for his own child. Says Jacoby: “Project X is not simply the greatest film that has ever been made, it is the greatest artistic achievement of our species. I am not kidding. Fuck the Mona Lisa.”)

OK, back to Teller: In 2013, he did The Spectacular Now, which was a perfect “starter” lead role. The festival hit — in which Teller plays a charismatic, aimless high school kid with a bit of a drinking problem — is flawed, but he’s totally magnetic. Given all that room to himself, he sucks it up beautifully.

This was right around when the John Cusack comparisons began; the heat was on. But the proper breakout was yet to come.

Somehow, he managed to outshine Woodley, who, when this movie came out, was riding high from The Descendants, Secret Life of the American Teenager, and being a weirdo in fairly homogenous Hollywood. His charisma matched perfectly (and surprisingly) with Woodley’s reserved teenager. She was delicate, he was ragged. Of course, these two have gone on to star in Divergent together, though as enemies not lovers.

Teller told The Hollywood Reporter that he’d feel “comfortable doing any kind of stuff with Shailene.” Aww! They don’t have a Titanic to their credit yet, but Miles and Shailene feel like the new Leonardo DiCaprio and Kate Winslet, or, as Woodley explains it, the new Julia Roberts and George Clooney. As an added bonus, constructing your own repertory of actors and directors to work with is en vogue these days. Good work by Miles, homing in on his go-to leading lady. Now, let’s get these two in a steamy early-20th-century automobile ASAP. And, to be clear, they’ve never dated.

Next came 21 & Over and That Awkward Moment, two pretty bad movies, which is particularly ridiculous for the latter: Teller, his man Michael B. Jordan, and the increasingly non-terrible Zac Efron are all onboard, and this still wasn’t watchable? One salvageable point: The script for Awkward is so thin that it feels like Teller is ad-libbing everything, which means watching it might be a fairly close approximation of what it’s like to hang with Teller in real life. If, um, that was something you happened to be interested in. (By the way, here’s Jordan, himself currently on a rocketship to the moon, on his pal Miles, in the Times: “Likening him to an athlete who joins the N.B.A. straight out of high school, Mr. Jordan added, ‘Some people are going to say he’s not game ready, but he’s got that raw talent that you’ve got to respect.’”)

Anyway: Between these two and the recent Two Night Stand, Teller has certainly hit some clunkers. And it doesn’t matter at all. The kid’s hot right now. The kid is hot right now.

He brought straight fire to the press tour for Two Night Stand. Since the movie is about sex and relationships, many of the interviews went to the bedroom, and he did not hold back. Elle talked to him while he was loopy in Las Vegas, and he went on to discuss Fleshlights (Google it! Once you get home from work!) and penis pills:

I’ve taken [Viagra] before. You know, curiosity killed the cat. It’s a big-ass pill. My buddy in Vegas gave me one. He was like, “Bro, break it in half and take it two hours before you’re ready.” When people are very specific on the instructions, that makes me kind of wary. But he was right.

By the way: For the past year or so, he’s been dating model Keleigh Sperry. Per her Instagram feed, they started “hanging out” sometime in Q2 2013. Given the choices he’s been making, you might expect him to date someone perhaps a bit more interesting? Keleigh Sperry seems like a lovely girl, but this is some Clooney pre-marriage shit right here. Miles Teller has a really hot girlfriend. Potentially too hot. Could there be any more definitive proof of his rising star?

Whiplash. WHIPLASH. We are no longer talking in theoreticals; even if Teller never works again, he’ll have given us this. Tamping down the motormouth stuff, Miles plays mean and cold and biting and damaged. He pulls himself way in, them builds himself back up to spray bullets. It’s a wonderful performance. We love this movie so much.

Plus: still bringing the heat in interviews! One of his main talking points is about how he actually did the drumming himself, playing till he bled both in rehearsals and the movie. Naturally, this makes his hands rather central to the movie. And naturally, Teller uses a hand double because he hates his thumbs! He tells GQ,

I did all my own drumming. I mean, I think there are some shots that are just really tight on the hands, and in general, I try not to get my hands in a real close-up because I have a fat thumb.

He also told Elle, “Well, wait until you see this little hammer-thumb on a 40-foot screen with a chewed nail. You’re going to be like, ‘Oh, God’ … If there’s a movie where you see me on the phone, it’s not my hands.” For an actor with very noticeable scars on his face, it’s hard to believe he’s so concerned about a single appendage. It doesn’t make any sense and it’s crazy and it’s just another reason why this guy is special.

The future is bright. Teller’s reteaming with Chazelle (plus Emma Watson) for the musical La La Land, and he might play Dan Aykroyd in the Belushi biopic (Emile Hirsch is Bluto!). He’s also got the juicy Bleed for This, in which he plays the boxer Vinny Pazienza, who waged a comeback after a terrible car accident nearly killed him. Weirdly enough: As the New York Times points out, “It will be the fifth of Mr. Teller’s films to involve a serious car crash, including Whiplash.”

Taking a page out of the Jennifer Lawrence playbook, he’s also backed up his small-movie choices with the big-budget blockbuster stuff. Next year, he’s back in the Divergent sequel Insurgent — even though he totally trashed the first one! “I was feeling dead inside,” the young man told W. “I didn’t have an interesting part [in Divergent], and I’d taken the film for business reasons: It was the first movie I’d done that was going to have an international audience.” He’s since walked back the comments, but the effect has been felt. Now he gets to look like a True Artist (*SHIA SIREN SHIA SIREN SHIA SIREN*) and still get that franchise cash.

He’s also Mr. Fantastic in the new Fantastic Four, which is a greatly pedigreed big movie: Kate Mara and Jamie Bell costar, as does Teller’s BFF MBJ; the young Josh Trank, who did exceptional work with the low-budget Chronicle, is directing. By the way, Teller’s already gone ahead and digged at the 2005 version: “All those actors were a lot older, their characters were in different places,” he told Vulture. “The tone of this film is completely different: We don’t have Michael Chiklis in a big Styrofoam thing.” Yeah, seriously, eat shit, Chiklis! And never stop talking, Miles Teller.

Mistrial and Error: RDJ’s Messy ‘The Judge’ and the Highs and Lows of What’s New This Week