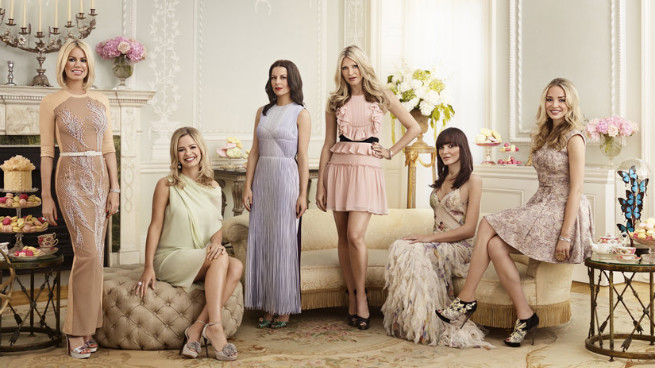 Bravo, ever ambitious, announced 15 new original series at its upfront presentation, two of which are scripted (a first for Bravo, which passed on Rita and The Joneses last year), and three in development. It’s a lot of information to process, a Chanel diaper bag full of real estate and eating and dating and cooking and more eating and divorcing and finally “having it all,” and you’re reaching blindly into it to find your keys. We must calm down. We must make index cards. We must tame this mess into a small-plates menu served to our table at Villa Blanca, where the billowing white curtains flirt relentlessly with our necks.

The two scripted works are each adapted, loosely or explicitly, from books: There’s Girlfriends’ Guide to Divorce, based on Vicki Iovine’s Girlfriends’ Guide series; and Odd Mom Out, based on Jill Kargman’s Momzillas. Girlfriends’ was first announced as having received a green light in February (after Showtime passed on it), and is written and produced by Buffy the Vampire Slayer’s Marti Noxon (who also did a consulting producer stint at Mad Men in 2008–09) — please place one of your pink cocktail onions on the Bravo scale, because this is a point in its favor. You may add a blini because Janeane Garofalo costars, but you must remove some of the caviar because Iovine’s divorce from music-producer husband Jimmy after more than two decades of marriage made me sad, and a self-help author “navigat[ing] her life as a single woman in her early 40s in Los Angeles” could be even more depressing. Pour out some of that beluga.

Odd Mom Out centers on the competitive-mothering world of fancy Upper East Siders as experienced by a toddler-rearing transplant who is eventually drawn into the icky society lifestyle. (I did not read Momzillas, but Amazon tells me that words like “sitch” and “neighb” are used to indicate how hip the moms are.) Oh, good, a psychological horror series at Bravo! Not so fast: Senior VP Lara Spotts told the Hollywood Reporter that “[w]hen incredibly talented author and New York socialite Jill Kargman stomped her way into our offices we knew we had found Bravo’s very own Lena Dunham or Louis C.K.” Oh. A satire. OK! The 30-minute single-camera stars Kargman as a scripted version of herself, and since Parenthood is on only once a week and takes inexcusably long hiatuses for no reason, I guess this has the potential to be The Real Housemothers of New York and to fill a certain demographic void.

Now, the good stuff: Let’s move on to the unscripted portion of our breakdown. We’ve all had a lot of sparkling wine, and we need numbers; we need math. We need to drink fast before Andy Cohen stops by our table. HIT ME WITH YOUR BRAVO STICK. HIT ME! HIT ME!

HOW CREEPY (-10 – 0): -9. Who’s bidding? You, and you didn’t even know you had a problem until you were evicted for spending your rent on Wolfgang Puck’s “stunning worn leather knife roll.” Intervention has been canceled and cannot save you.

HOW NOVEL (0 – 10): +8, because QVC apparently doesn’t count as a “live televised estate sale,” so this will be the first. Minus two points because snoooore.

The One That Wants to Be Important

HOW FANCY: +5. The work-life balance of ambitious, multigenerational women in the fashion industry will probably entail a lot of time on the phone and people wearing glasses on their heads.

HOW CREEPY: 0. Morgan Spurlock is an executive producer, and this seems like it’s going to be nonexploitative. But hey, surprise me.

HOW NOVEL: +5. I already have a good idea of work-life balance from Snooki’s Instagram.

The Bitch-Fights in Exotic Locations One

HOW FANCY: +10. When Bravo promises “upscale characters,” it’s not fucking around, even though it employs a narrow definition. Also, what is a “seven-star resort”? Because the cast will apparently be visiting several.

HOW CREEPY: -6. Reading between the lines of the press release, or even reading the actual words of it (“vibrant and varied personalities”), you get the sense that Bravo has filtered its applicants through a personality testing machine and is using its advanced social chemistry mechanics to make sure this two-month trip is a bloodbath.

HOW NOVEL: +2. I don’t even know how to approach this because I don’t understand the hotel star system.

HOW CREEPY: 0. These are contestants we know from previous Top Chef and Top Chef Masters seasons competing against each other, and the judges are familiar too (Gail Simmons, Curtis Stone, Wolfgang Puck, and Hugh Acheson).

POINTS I AWARD BECAUSE I MUST: +4. Even if it’s getting a little stale, Top Chef is the best thing on TV after you’ve exhausted your DVR cache.

HOW FANCY: 9. This is a Colicchio-Ramsay collaboration, with 16 trendy restaurants from around the country competing against each other.

HOW CREEPY: -2. Depending on the depth of Gordon Ramsay’s involvement, there might be yelling and scallop-related shame.

HOW NOVEL: +2. Though it’s an idea imported from Ramsay’s U.K. television empire, Colicchio’s criticism outside the Top Chef kitchen will be fun.

HOW FANCY: 0. This one is confusing. I think it encourages platonic friends to date, but the use of the phrase “a true social experiment” is disconcerting. Are we going to see people gag when they kiss each other? Is this a show about pretending to be attracted to someone you aren’t because you want to be part of a “social experiment”? I will award that no fancy points!

HOW CREEPY: -6. I am being optimistic.

HOW NOVEL: +8. Especially if nobody conceals their disgust.

POINTS I DEDUCT BECAUSE I MUST: -1. The title. Eek.

HOW FANCY: 7. These single New Yorkers are successful and they “live it up”!

HOW CREEPY: -2. I predict numerous East Coast Jax and Stassis.

HOW NOVEL: 6. The series is being pitched as a “real-time docu-drama,” Bravo’s first, and promises in vague terms to allow for fan interaction “in ways that have never been seen through social media.”

The Other Divorce One

HOW FANCY: 6. Appraisers are hired to divide divorcing couples’ belongings, so these diamonds are not aspirational (though I’m sure you could do worse).

HOW NOVEL: 3. I really can’t talk about this anymore. The mediator calls herself the “Divorce Diva.” C’mon, we’re trying to have a nice dinner here.

HOW FANCY: 5. The Manzos are rich, but they hustle.

HOW CREEPY: -2. Just based on my RHONJ fatigue.

HOW NOVEL: 0. I can’t even make a thought about this. These are the familiar antics of a WACKY ITALIAN FAMILY! but stretched out like the tiniest ball of dough into the thinnest sheet of lasagna.

HOW FANCY: 2. There will be diapers (I mean, if it’s really extreme). There is no mention of money, purebred animals, or jewels in the release.

HOW CREEPY: -1. Wife Swap and Trading Spouses put opposing household views on child-rearing in perspective, and this doesn’t sound like it involves a parent house-transplant.

HOW NOVEL: 1. That’s a sympathy point because I also learned really deep lessons from previous parent-swapping programs, like how to baby-proof a stove.

HOW FANCY: 6. They may be “jet-setters,” but they are about to be embarrassed as they are followed on their power quest through America (because Los Angeles does that to everyone).

HOW CREEPY: -3. Could be more, depending on the international-phobic element.

HOW NOVEL: 4. This seems like a bad idea, and look! It’s going right ahead with its agenda! That’s something.

HOW FANCY: 10. High tea combined with unfamiliar British social dynamics will make you feel bad about your cocktail napkins.

HOW CREEPY: -2. The inception of a Real Housewives–esque franchise is always innocent when you compare it to Season 2 of Beverly Hills.

HOW NOVEL: 2. These women aren’t expressly referred to as housewives, which should make us all feel enlightened and free.

HOW FANCY: 4. “Dedicated” pageant wife-moms competing on the adult circuit may involve shopping, but it’s going to be stressed-out crazy shopping, the second-to-least fancy kind of consumerism.

HOW CREEPY: -5. I don’t want to see mothers competing with daughters for pageant trophies. Mama June would never.

HOW NOVEL: 0. If you ever cared about pageants, and I’m not judging you for that, there’s still time to refresh the page, friend.

HOW CREEPY: 0. Ever since House Hunters was revealed to be staged, we have to take what we can get, and real estate shows never seek to drag out their subjects’ personal lives. It’s seriously all about verandas.

HOW NOVEL: 0. Every episode of these shows is exactly the same: elevator music, green lawns, talking about hosting a party on the roof deck, awkward brunch meetings, cell phones and hair extensions. But now instead of salads, everyone will eat plantains. Fine by me — show me the bonus room.

HOW FANCY: 6. Atlanta Housewife Kandi Burruss won a Grammy for working on TLC’s “No Scrubs” and used to be in Xscape; her new husband is one of RHOA’s producers, Todd Tucker.

HOW NOVEL: 0. They already got married; plus, who wants to sit through someone else’s wedding plans? The table assignments? The color scheme? That’s bummer city.

HOW FANCY: 3. Jaime Primak Sullivan, a publicist from New Jersey, must assimilate to life in the South after marrying an Southern man and relocating to Mountain Brook, Alabama.

HOW CREEPY: -1. “Jaime can’t help but speak her mind,” so someone’s sure to get offended. Nobody, however, is sure to care.

HOW NOVEL: 1. It’s not like she’s moving to Dubai. They do body waves in Alabama. There is sushi. Everyone is going to be OK.

THE UNSCRIPTED LOSER: A tie between Game of Crowns and Untying the Knot