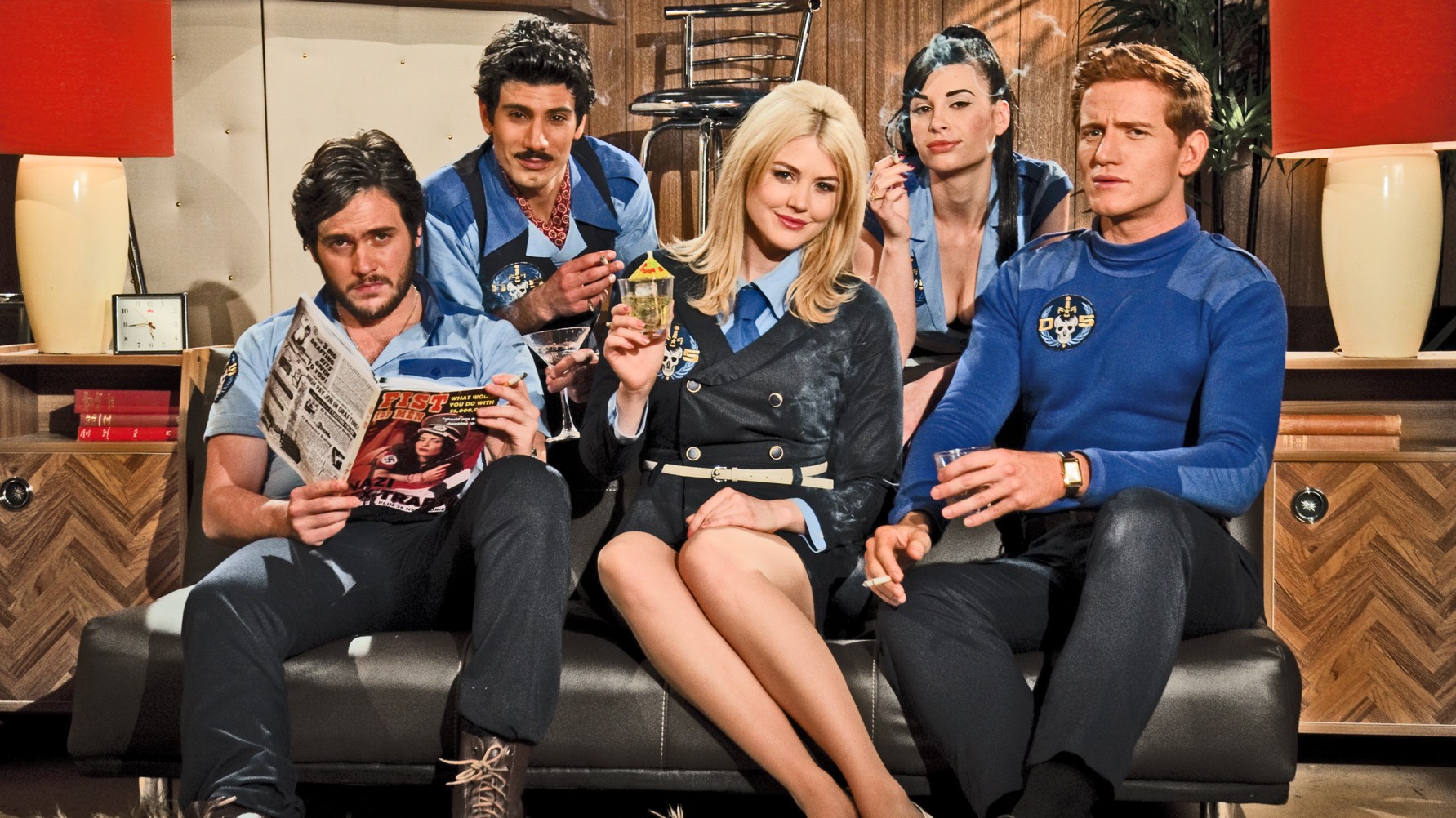 Two Nazi blimps, held aloft by clearly visible wires, float above a model of the Eiffel Tower that looks as if it were built for a fifth grader’s class project. Using prize-machine-grabber hands, the blimps snag the monument and hoist it into the sky.

Below, French resistance agents can only watch, their spirits crushed, before Nazi soldiers burst in and machine-gun them to death. The soldiers’ dog, a remarkably unrealistic puppet, shouts in German. Subtitles translate his message: “Crush the enemies of the Führer! Onwards to Final Victory!”

So begins “I Danced for Hitler,” the first episode of Danger 5, a TV series from Australia set amid a fever-dream 1960s version of World War II. Timed to coincide with the release of the second series down under, Netflix added the six episodes of Danger 5’s first season1 to its streaming catalogue.

The show is worth binge-watching for the batshit-craziness factor alone. The title refers to a team of five special agents who save the world from Nazi terrors that escalate from talking dogs to dinosaurs to giant mecha battlesuits.

The team is a collection of walking stereotypes: Tucker, the uptight leader. Jackson, the lone-wolf American. Claire, the prudish Brit. Ilsa, the Russian vamp. And Pierre, the goofball fifth wheel/bartender. They take their orders from “the Colonel,” a man with the head of a bald eagle who ends every briefing with, “And, as always, kill Hitler.”

As bizarre as the show is, it sports a formulaic underlying structure, with every episode a riff on the archetypal “overcoming the monster” plot: A new Nazi threat has emerged. The team goes out to combat it. They’re taken captive and are near death. They manage to escape and gain the upper hand. They almost kill Hitler, but he escapes by leaping through a glass window.2 Rinse, repeat.

Danger 5 clothes itself in the aesthetics of cheap 1960s action and sci-fi TV, down to the fake props and models, the hammy acting, and the haze of cigarette smoke always hovering in view. It fits squarely into the burgeoning subgenre of works that intentionally attempt to thread the so-bad-it’s-good needle. What makes Danger 5 remarkable is that it actually succeeds. 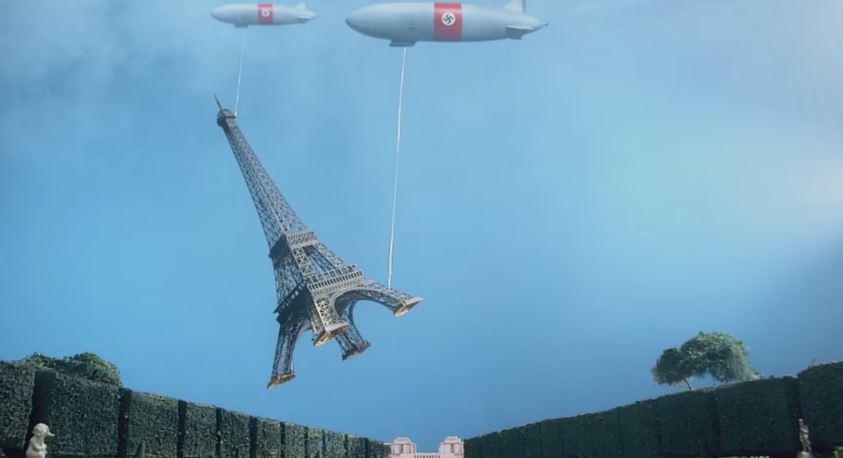 Quick history lesson: The urtext of the so-bad-it’s-good phenomenon is Plan 9 From Outer Space, the 1959 sci-fi B movie that is, by most anyone’s standards, a crap film full of plot holes, bad acting, and worse editing. And yet it built up a cult following because it is so bad, and so bizarre, that it somehow loops back around into goodness.

For decades, good-bad films remained cult objects, with obsessive fans sharing bootleg copies of critical and commercial bombs that were also enjoyably absurd. The latest resurgence of the form started in 2009, when the documentary Best Worst Movie brought new attention to the 1990 train wreck Troll 2, and Tommy Wiseau’s art house disaster The Room became the world’s most improbable — and incomprehensible — phenomenon.

Packed screenings of those films led to a scramble to turn up the newest good-bad obsession, a Storage Wars–style fight to find the most valuable trash.3 As the genre grew, it also spawned a new subgenre, works intentionally made to be so bad they’re good — Snakes on a Plane, Black Dynamite, and the Sharknado series. But, despite some interesting qualities, these all have been flawed. Some are too good to be bad. Some, like the lifeless and uninspired Sharknado, are bad, but not bad enough. It turns out that when you set out to make something shitty, usually you succeed.

The best so-bad-it’s-good films result from an intense but deeply flawed creative vision and a complete lack of self-awareness. Take Wiseau, the writer-director-producer-star who was certain he was making the next Great American Movie and was maniacal4 in his efforts to bring The Room to life. What makes The Room so enjoyable is the rampant cluelessness of it, the gulf between Wiseau’s grand vision and his shambling creation. The audience is laughing at him, not with him. And when Samuel L. Jackson complains about the motherfucking snakes on the motherfucking plane, he may as well be winking right at us, reminding us that, yes, there’s a joke, but he’s in on it. At whom, then, are we supposed to laugh?

Danger 5 works so well because, as crazy a world as it imagines, it never winks,5 never reminds the audience of the artifice. No matter how absurd things get, the cast remains all in on the insanity. Sean James Murphy and Amanda Simons play it straight as Tucker and Claire, respectively. Series cocreator David Ashby plays Jackson as a sweating, doughy asshole. Natasa Ristic is the star of the bunch, with her Ilsa the best Bond girl who never was. And Carmine Russo plays Hitler (voiced by Andreas Sobik) as schemer and pervert, his black trench coat marking him as both evil and probably legally forbidden from living within 2,000 feet of a school.

Ashby and cocreator Dario Russo flesh out the Danger 5 world with an immaculate attention to detail, down to the shoddy model sets and the firecrackers used to simulate bullets ricocheting around. The absurdity also carries through to the smallest elements — in the first episode, the Nazi guards at Hitler’s birthday party wear glittery headbands over their Gestapo caps. Everything has a cheap, DIY feel, even Hitler’s glued-on mustache.

Whereas Sharknado and Snakes on a Plane were content to let an absurd premise stand on its own, Danger 5 always pushes things one step further — dialing the craziness all the way up, then turning it to 11. Take the second episode. Nazi dinosaurs are rampaging across the world. But when a Nazi pterodactyl attacks the team, it does so with a broken beer bottle.

After the opening scene of the first episode, my wife turned to me and said, “This is terrible.”

This post has been updated to correct information about the actors who play Hitler in Danger 5.