Bates Motel Preview: A Boy’s BFF Is His Mother 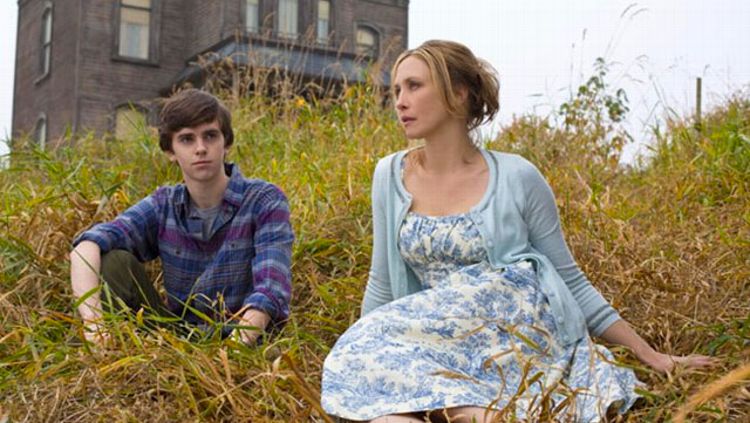 Everybody wants to poke a finger into Psycho, trying to reimagine the creepy recipe that officially put calling your mom “Mother” out of style. Some of the prequels, sequels, and spin-offs (including 1987’s Bates Motel) were OK, some were bad, and all of them seemed to warn “Don’t mess with Hitchcock.” Something about the original film invites audiences to B.S. forever about Freudian themes and shower trivia, and I guess if we’re so reluctant to let go of it, it makes sense that we keep trying to stick it in a petri dish. We have an innate preoccupation with diagnosing evil: Is it innate? Can it be caused? And which is worse? Anthony Perkins’s Norman was tragically fascinating, almost sympathetic. As “Mother,” he’s a monster; as Norman, his impulses are to prevent his dark side from taking over. The idea that he was once somehow pristine, or at least only as garden-variety creepy as anyone else, and became damaged by a platonic (or otherwise) dysfunctional love tango with his mother is an intriguing knot to untangle.

A&E’s Bates Motel, executive produced by Carlton Cuse (Lost) and Kerry Ehrin (Friday Night Lights), offers up a fresh-faced and dorky teenage Norman (Freddie Highmore, Charlie and the Chocolate Factory’s Charlie Bucket) in the first half of the pilot episode (which premieres Monday night at 10 p.m. EST/PST), but two-thirds of the way in it’s easy to imagine how life takes a big old dump on the young man’s psyche and turns him into a maladjusted killer later on down the line. First, there’s his mother Norma (Vera Farmiga), who flirts with him relentlessly (it’s not exactly unreciprocated, so I guess you might say the seeds of eccentricity were already there); then, there’s an unfortunate family tragedy that sends Norma and Norman across state lines to Oregon, where they start new lives running the former Seafarer Motel, a change that entails the high schooler swapping schools and taking a job as a sort of underaged co-manager; finally, the locals hate Norma, especially the would-be owner of the Seafarer, who lost the family business to foreclosure. At least the 1950s were simpler times, when everything could be patched up with egg creams and back issues of Archie.

But wait! It’s not the 1950s at all, because despite Norma’s retro sundress in the first few scenes, Bates Motel is set in modern times, if not the very near future (Norman can text faster than anybody I’ve ever seen). Divorcing Psycho from its native era and location was, I think, a smooth move — and not just because Cuse is hinting at reefer madness buzzing around the boundaries of the motel (if there’s one thing that makes over-protective, clingy moms nervous, it’s reefer madness). The physical isolation of the Bateses is much less stark when it’s outfitted with high-speed wireless and Facebook access; the psychological isolation, the secrets shared between Norman and his mother, has to create the seclusion that otherwise would have been inherent in the motel’s poor proximity to popular highways. The secrets that bind Norman and Norma together have to be too terrible to even think of SMSing about. That’s serious shit.

Norma and her son’s relationship is compelling, and not just because Farmiga has the skills to avoid playing Mrs. Bates as an unlikable villain. She’s both cool mom and whip-cracker, victim (an intruder gives her a pretty good reason to want Norman, or anyone, upstairs when she’s alone in the innkeeper’s house) and seductress (Norman’s mom has got it goin’ on). They’re just two drifters, off to rent a room. Despite his “different” affectations (I will admit to hating any scene that takes place between a pretty blonde and a pale guy at a party during which she looks deeply into his eyes and tells him how “different” he is), Everybody Loves Norman in Bates motel county; this newfound popularity, created by being the new kid in what otherwise appears to be an insular community, will surely pose more and more of a threat to Norma and create a thread of tension that can’t help but put a strain on their intense (and creepy) bond.

The more secrets that Norman and his mother amass between themselves, the more the plot will, I hope, deviate from what we expect from Psycho spawn, spinning out into a kind of doomed love story between two people that probably could have been prevented had Norman just said, “You know what, screw it, I’m going to go get emancipated.” Norman’s half-brother, Dylan (Max Thieriot), who’s introduced in the pilot only during a bitchy phone call to his mother, and Norma’s past, which I’m sure is at least a little bit shady, will probably allow for some B- and C-plots that could eat up plenty of time as Norman slowly loses his mind. Let’s go full-on Thorn Birds, why not? We don’t have to creep around his superego on the second floor until the third season. Let’s hang out in the basement with his id for a while.