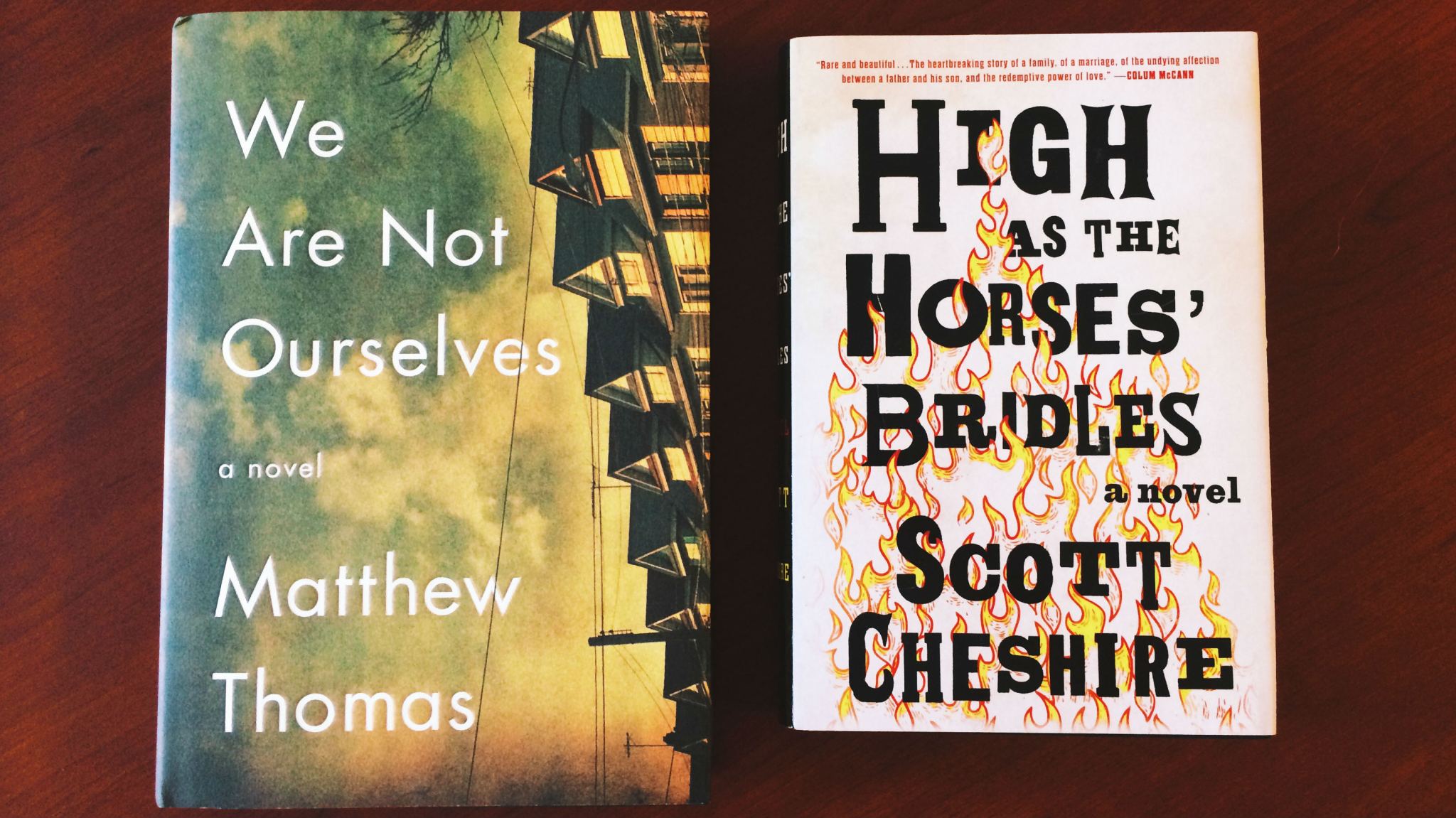 Matthew Thomas’s We Are Not Ourselves and Scott Cheshire’s High As the Horses’ Bridles are two impressive debut novels that deal with family and identity in America. And while they tackle these themes in very different ways, both books start in a similar place. Like, literally the same place. Both novels open in Queens, New York.

Let’s start with Cheshire, since the opening 30 pages of Bridles are among the finest published this year. The book opens in 1980 with 12-year-old Josiah Laudermilk pacing backstage at the Queens Howard Theater, about to address 4,000 members of a Jehovah’s Witness–like congregation with a prophecy of Armageddon. Josiah is nervous, but the moment is rendered with stunning detail and atmosphere. The scene frames the novel, which centers on Josiah’s relationship with his dad. Cheshire writes: “When Josiah thinks of Armageddon, it makes him feel older, and bigger, stronger like his father.”

We Are Not Ourselves establishes itself four decades earlier in the Woodside neighborhood of Queens, where young Eileen Tumulty dreams of escaping the alcoholism that has ravaged her Irish family. It is perhaps this yearning to escape one’s childhood that ignites both Bridles and Ourselves, though from there they move in very different directions. Thomas is interested in a more linear story, going beat by beat through Eileen’s life. She falls for Ed Leary, a scientist who represents her best chance at a stable domestic life, one that she believes can be earned through hard work and perseverance. And for a long time, she and Ed have that. They get married, their prosperity is marked by the homes they own, and Eileen gives birth to their son Connell. It’s a claustrophobic but absorbing book that attempts to speak to a larger late 20th-century experience. Eileen’s father says, “People like you, with all your affairs in order — you can have anything you want in this country.” This turns out to be a well-meaning but misguided idea. As much as it is a portrait of a family, Ourselves is also the chronicle of the broken promise of the American suburb.

This is a decidedly “big” novel about small things. It’s a suburban family drama with low stakes, and yet its interior thoroughness remains remarkably engaging throughout its 640 pages. There is something impressive in its expanse, its ability to hold your attention with as many words as possible. As an exercise, it exists somewhere between the banal-yet-captivating absurdity of Karl Ove Knausgaard’s six-volume autobiography My Struggle and Donna Tartt’s decidedly floral The Goldfinch. Hell, if 6,000 words about the mozzarella sticks at TGI Friday’s can be engaging throughout, why can’t an epic-length novel about a family living in the suburbs of New Jersey?

At the early age of 51, Ed is diagnosed with Alzheimer’s. The most crushing line in the book comes from Ed’s doctor after his diagnosis: “[F]rom now on, it might be best to think of every day as the best day of the rest of your life.” It may sound like the doctor is speaking to Ed, but he’s actually addressing Eileen. It may be Ed’s health that is deteriorating, but it will be Eileen who shoulders the burden of that disease.

As the novel’s title suggests, the philosophical questions loom throughout: Are we true to ourselves? Is our self-perception even close to who we really are? There is an early moment in We Are Not Ourselves when Ed chooses to be a teacher rather than take a better-paying job creating drugs for a pharmaceutical company. Later in life, as Ed’s early Alzheimer’s strains them financially, it becomes a point of reflection, perhaps one of regret. But as Ed is not himself later in life, he at least has chosen to be his truest self earlier in it.

The final act of Ourselves, in which Eileen finds herself alone but not alone living with Ed, is delicately written and extraordinarily moving. Though much of the book is seen from Ed and Connell’s perspectives, Ourselves is really Eileen’s story, and the truth to her experience is a much muddier idea. She spends her entire life working toward a domestic ideal, only to fall short. Is she defined by the thing she wants or by the failures to attain those things? Despite the richness of her life, We Are Not Ourselves is in some ways a tragedy of American ideals.

It’s probably not much of a surprise that Bridles, a novel surrounding a pagan religion, is also about false promises. After the first act of Cheshire’s novel, we jump ahead 20 years to find Josiah (now Josie) returning to take care of his dying father. Josie is a completely changed man — one who has abandoned the church and attempted to make a life of his own in California. His return, though, is one that comes after many failures: his failed marriage, his failed business, his failed life on the other coast.

Considering just how intoxicating those opening pages of Bridles are, it’s jarring how quickly the novel comes to a halt in its central act. In many ways, it settles into a more measured, even-tempered story about Josie’s relationship to his denounced faith and his ailing father. Bridles is steeped in rich apocalyptic language. The incredible way in which Cheshire works a sentence — subtle, sometimes lyrical — makes the prose of Matthew Thomas seem functional at best.

Still, there are moments in Bridles that stumble, and despite the novel’s brevity, there are times when it meanders unnecessarily. (One can appreciate that Cheshire often uses dialogue for tone rather than character development, but it sometimes makes conversations feel trite.) But the stunning last act — which jumps back in time — is a trick of literary genius, a risky leap that, if not executed correctly, threatens to undo the rest of the novel. (I won’t give away the surprise, but it’s excellent.)

Through its structure, Bridles does some of its best storytelling between the pages. The gaps of time change the shape of the text, covering an incredible amount of ground between very few pages. For a first-time novelist, Cheshire is extremely ambitious.

It’s tempting to call a long novel ambitious, but Thomas is actually content to follow a more conventional mode of storytelling. In We Are Not Ourselves, few details are omitted. It also makes more missteps, ones we are perhaps more forgiving of in longer works. But there is something classic about Thomas’s work. It may not be as inventive as High As the Horses’ Bridles, but it is patient and focused; its broader implications about the American experience are obvious but still powerful. We Are Not Ourselves isn’t interested in movement. Instead it chooses to be a monument.

Bad to the Bone: In her first essay collection, Bad Feminist, Roxane Gay takes single events and extrapolates their broader cultural relevance. For example, Daniel Tosh’s wrongful defense of a rape joke opens up to a larger discussion of male entitlement and the trivialization of rape; her takedown of The Help illustrates an all-too-common treatment of black characters in film and other sectors of pop culture (“It is rare that we ever see ourselves as anything but the sassy black friend or the nanny or the secretary or the district attorney or the magical negro”). But it’s her own stories — most notably, her essay about encountering male anger at a Scrabble tournament — that are the strongest displays of Gay’s breadth, experience, and wisdom. But as forceful and serious as Bad Feminist can be, it’s also a book that’s not afraid to be funny. Gay isn’t just an important cultural critic, she’s also an accessible one. Bad Feminist cements her vision.

Substance Over “Gangnam Style”: The subtitle of Euny Hong’s The Birth of Korean Cool, “How One Nation Is Conquering the World Through Pop Culture,” is perhaps a bit of an exaggeration. But beyond all of the book’s enthusiasm is a smart, colorful look at Korea’s growing cultural influence. Yes, there’s a lot here about Psy, but Hong goes deeper into the machinations of how Korean pop culture is perceived and constructed (it turns out “Gangnam Style” is more an exception to than a good representation of Korean music). Hong confronts the influence of Korean film, television, and video games, as well as the meteoric rise of the country’s tech sector, led by the burgeoning of Samsung (“the company formerly known as Samsuck,” Hong jokes). She also tempers her societal observations by wrapping them around her own personal narrative of moving from America to Seoul as a child, which grants her firsthand experience of the country’s recent economic boom. The result is an incisive, colorfully written account of South Korea’s cultural ascent.

Give an F: In Daniel Kehlmann’s F, Arthur Friedland is a loser of sorts — father of three, bored husband, unpublished writer. After seeing the performance of a hypnotist, Arthur mysteriously empties his family’s bank account, takes all of his documents, and disappears. Flash forward a decade or so, and we find that Arthur’s kids — a banker, a priest, and a painter — are also losers, trying to piece together the choices in their lives that have led them to be such wayward failures. Spotlessly translated from German by Carol Brown Janeway, F is a clever, moving tragicomedy that meditates on the meaning of family, faith, fatherhood, and probably a bunch of other words that begin with f.

Kevin Nguyen (@knguyen) is a writer based in Brooklyn.

Filed Under: Books, We Are Not Ourselves, Matthew Thomas, High as the Horses Bridles, Scott Cheshire, book reviews

Do You Like Prince Movies? Podcast: 'Get on Up' and 'Guardians of the Galaxy'