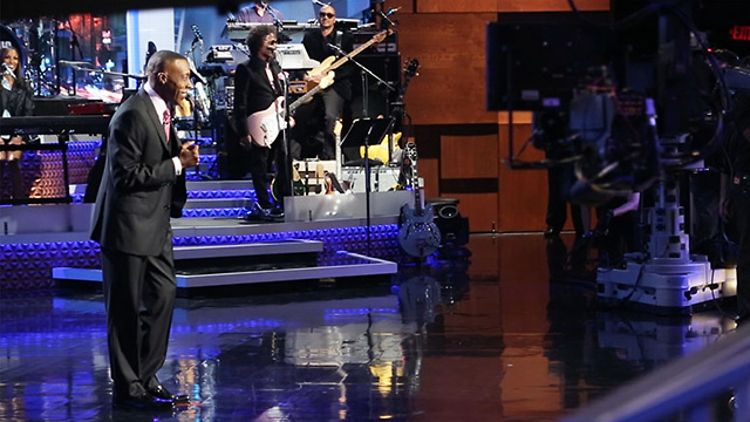 Despite his many accomplishments — including getting Bill Clinton elected, taking down Vanilla Ice, and, most recently, stoking sympathy for Clay Aiken on Celebrity Apprentice — Arsenio Hall managed to surpass himself last night: He invented time travel.

That’s right. After a 19-year “hiatus,” during which late-night talk shows have multiplied like sarcoma cells, The Arsenio Hall Show returned. Sure, the Dog Pound whoops were a little bit tamer, and the audience members’ tube tops bulged in all the wrong places, but for all intents and purposes, last night’s show transported us back to the early ’90s. Snoop dropped it like it was hot; Chris Tucker talked about a Friday sequel; Hall even used his old theme.

While Hall threw the present day a few bones by name-dropping Kate Upton and Chris Christie, his contemporary references were for the most part quickly sucked back into the Clinton-era vortex from which Hall seemed to have sprung, fully re-formed, but with a haircut. Even the prices in his food-truck sketch weren’t adjusted for inflation. Granted, opening the show with a Leno-like cameo probably means “relevance” isn’t something Hall loses sleep over, but watching the show felt a lot like stumbling into certain creaky bars deep in the Sunset Strip, where patrons still debate whether Ross and Rachel were on a “break.”

In fairness, Hall is attempting something very brave, right down to his PBS tote bag joke. And Paula Abdul’s heartfelt tribute to Hall let a whiff of authentic emotion creep into the proceedings. Then again, the original show was never really about authenticity, no matter how ingratiatingly pushy Hall could get with his guests. Back then, Hall was a long overdue correction to a white male establishment that had become so ossified it threatened to topple under the weight of its own Anglo-Saxon-ness.

We’ve come a long way since then, due in no small part to Hall. Now the outsiders are the establishment, a truth hammered into my head as Tucker waxed rhapsodic about the America’s Cup. Whether Hall’s ersatz chumminess can find its place within our current age of reflexive irony remains to be seen; this was, after all, his first show in almost a generation. I for one hope it can, because the ’90s nostalgia didn’t really make me lament a lost age of simpler times. It just made me feel really old.

Except for Snoop, of course. He’s timeless.