An Alien Superfan’s Guide to the New Prometheus Trailers 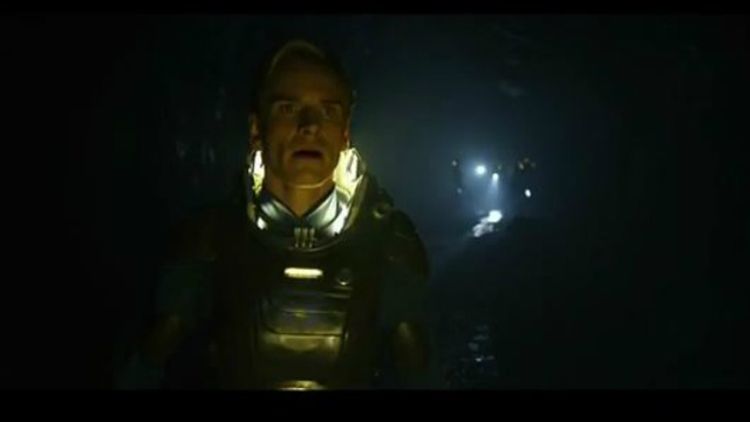 My weekend was peppered with some NCAA hoops (Go ‘Cuse!), some Knicks (three in a row, baby), some 21 Jump Street (a hilarious, meta action-comedy), and of course some green beer and bagels. But my mind, my thoughts, my focus was elsewhere. For the last 72 hours, I’ve been unhealthily fixated on the slew of new Prometheus content slung onto the web.

There’s been such an overabundance of visuals, dialogue, and talking points to sift through. So in an effort to piece them all together in some king of satisfyingly comprehensive way, I figured it’d be best to break them all down into three categories.

Much of the hype around this film is centered on the question of “is Prometheus a prequel to Alien”? As I previously stated, I believe the answer is unequivocally yes, and much of the confusion is due to cleverly crafted talking points delivered from Ridley Scott (the film’s director), Damon Lindelof (the writer), and 20th Century Fox (the studio). And why not? It’s hard to make a summer film stand out, much less one possibly (definitely) linked to a once-praised but now irrelevant and mocked movie series. So I have no problem with these folks stoking the fanboy fire with vague and sometimes conflicting messages.

Build the hype, good on ya, the more attention the better. For me, Prometheus is probably the single most anticipated film of my moviegoing lifetime. I have a deep admiration for Alien, as I believe it to be one of the best suspense thrillers of all time, one on the level of Hitchcock. I poured countless hours of movie watching into, and have written numerous college papers on, the original 1979 film.

Subsequently, I’ve chosen to build my anticipation for Prometheus based solely on what I see in the trailers and viral videos, because even with snazzy editing tricks, an image doesn’t lie (especially when looked at frame-by-frame, over and over, as if it were the Zapruder film). So despite some interesting tidbits dropped by Scott and Lindelof at this weekend’s WonderCon, I’m only going to build my hypothesis based on what can be backed up in the trailers.

And to this, over the weekend there were three noteworthy Prometheus videos released. All of them leaving just as many questions as they revealed details.

A worthy follow-up to the initial teaser trailer as the vastness of visuals and the foreboding tone is further established. And it’s loaded with a ton of new images with tantalizing objects peeking into frame. (Is that a facehugger egg at 0:54?)

An immensely creepy commercial from the fictitious (and evil?) Weyland Corporation, trying to sell the David 8 android. Michael Fassbender (who plays David in the film) voices the ad and can be seeing “coming to consciousness” as a newly opened David.

The pièce de résistance for the weekend’s offerings, it’s a killer two minutes and 30 seconds where another layer of the Prometheus/Alien allegorical onion is peeled away. There are big-picture narrative through-lines established, and significant imagery is revealed.

*The most significant and concrete piece of info ascertained from the trailer is when it’s stated that the Prometheus main characters have discovered identical pictograms of unknown origins in different ancient civilizations, separated by centuries, and deduce that they’re some kind of invitation (0:40).

*Prometheus is not just the title of the film; it’s also the name of the ship in which the main characters travel to the pictogram’s planet of origin.

*What the main characters find on the planet is presumed to be dormant and/or dead, but is in fact alive and far more sinister than they could have imagined.

*The Space Jockey and its ship are featured heavily in both the IMAX teaser and the full trailer (they Jockey at 1:00 in the IMAX teaser, and at 2:11 in the full trailer. And his ship … when you see a “C” shaped ship that’s not The Prometheus, well, that’s the Space Jockey’s ship). For those unaware, the Space Jockey and his derelict ship are the source of a distress signal investigated by the crew of the Nostromo in the original Alien. In the 1979 film, the Space Jockey is found dead in his ship, his chest exploded from the inside (i.e., something burst out of it). From both Prometheus’ IMAX teaser and the full trailer, it is left unclear if the area we first see the characters exploring is in fact the inside of the Space Jockey’s ship, but the Jockey’s craft does get featured quite heavily later on. There are brief, but extremely significant, shots of the Jockey’s iconic chair opening and closing itself up. And we see his ship take off, crash, and ultimately settle in the position the Nostromo’s crew discovers it in.

*At 1:37 in the full trailer there’s a brief shot of what appears to be a Xenomorph (the actual alien from Alien) either mummified or carved into a wall.

*The subtlest of takeaways from the full trailer comes at 1:55, when an unseen voice can be heard under the unfurling montage. If listened to closely the (male) voice can be heard screaming, “Get it off! Cut it off!” and moments later (at 2:00 and 2:03) we see images of humans either grabbing their faces under their domed space helmets or writhing on a gurney. Both are familiar visuals in the Alien canon when it comes to Facehuggers (the parasitic alien that attaches itself to the face of a living being in order to implant an egg and make them a host for a baby Xenomorph).

*My vote for Most Revealing Moment is at 1:59 when an alien humanoid is shown. It’s seen standing up from what appears to be the Space Jockey’s ship. The creature also appears at 2:03 and 2:15.

*In both the IMAX teaser and the full trailer there is a lot of Michael Fassbender’s David. He even delivers the full trailer’s final, and extremely potent, line, “Big things have small beginnings.” (The same final line as the David 8 commercial.)

What We Can Conclude (or Just Bold Guesses)

*The alien humanoid IS the Space Jockey. What’s discovered in the original Alien and glimpsed here is just his exoskeleton or “space suit.” He’s much more human (a.k.a. evil) than we’d always believed.

*The Facehuggers will make an appearance in Prometheus. Either attacking the crew of the Prometheus or we’ll get to see the little nasties have their way with the Space Jockey, thus setting up the events of the 1979 film.

*The messaging from Lindelof and Scott that this film is a different story in the same world as the original Alien films, and is meant to add context to them, but at the same time move the narrative away from them, is utter BS.

I might buy this if the Space Jockey were the only carryover element, as its origins and backstory were unknown and could be crafted/manipulated to be left behind as the Prometheus storyline continued on. But it’s the presence of The Weyland Corporation that forms the undeniable and solid link between the world of Prometheus and the Alien films.

Over the course of four films (Alien, Aliens, Alien 3, Alien Resurrection), The Weyland Corporation is firmly established as a greedy and soulless organization resolute on capturing and weaponizing the Xenomorph. Their sadistic desires are what prematurely wake the crew of the Nostromo out of cryo-sleep and send them to explore the Space Jockey’s distress signal, thus leading to the events in the three subsequent films. Their logo can also be seen at the end of the David 8 commercial, and the great Guy Pearce is credited as playing the company’s namesake, Peter Weyland.

There is a documented and detailed history of The Weyland Corporation in the Alien annals, and for this reason I feel it is impossible to look at Prometheus as anything but a direct prequel to the Alien films.

*Back in February, a viral video of Guy Pearce playing Peter Weyland at the 2023 TED Conference was leaked on the web. What he says touches on what I believe to be the big, undisclosed plot detail of Prometheus:  What is the significance of the android David? In all four of the original Alien films, the androids have played crucial roles in shaping the destiny of the main characters, and much like the Xenomorphs themselves, the androids are highly unpredictable and often act out on their own (for good and bad). Ultimately, the androids act as a metaphor for man’s hubristic, and often myopic, desire to create and control technology.

This subliminally becomes the crux of Weyland’s TED talk. He starts by telling the story of Prometheus, the titan who gave man the gift of fire. This was a gift he stole from the Gods, and when caught, the Gods strung him up on a rock and had an eagle rip through his belly and devour his insides. He then lists a multitude of other technological achievements (the light bulb, automobile, television, Internet, etc.), and then states, “We can create cybernetic individuals who, in a few shorts years, will be completely indistinguishable from us. Which leads to an obvious conclusion: We are the gods now.”

Weyland’s statement, combined with the track record of the other androids from the first four Alien films, the David 8 viral ad, and the various images of Fassbender in both the IMAX teaser and full trailer lead me to believe that the android David is probably the most important character in the film, will likely be the one to trigger the mayhem seen in the trailer, and will ultimately be the one to save and/or doom the Prometheus crew.

With this all said, here’s a colossal and baseless hypothesis: Building off the above David theory, and simply comparing the body type of Michael Fassbender with the alien humanoid seen in the trailer, I’m going to venture a guess and say that at some point those two characters become one and the same.

If I had to tender one negative Prometheus critique it would be that I feel the film is too large in scale. I was truly hoping for the return of the subtle and minimalist Ridley Scott from the 1979 original. The scares and the tone of Alien stem from Scott’s superb juxtaposition of light and dark, the delicate employment of hand-held cameras in claustrophobic spaces, and tons and tons of atmosphere. So let’s all keep our fingers crossed that despite what we see in the trailers, the grandiose Ridley Scott who helmed Gladiator and Kingdom of Heaven sits this one out.

I’ve sat on sidewalks for 20 hours to see the Star Wars films, missed middle school graduations to see Jurassic Park on opening day, but never has there been a film that has latched onto my fandom like Prometheus. As a prequel, it feels fresh and new, but with all the references and winks, the film taps deeply into my nostalgia bank.

I really don’t know what I’m going to do if this film sucks.

This morning, the international trailer was released. The imagery is mostly the same, but I find this to be the most effective video of the bunch, due to the inclusion of the composed musical elements. Hearing the ethereal and hopeful quality of the score turn to a more menacing mood strikes the right Alien universe tone, and makes the events seen on-screen feel more intimate and emotional. Also, after the tonal shift in the trailer, I find the audio transmissions played out under the montage to be more impactful. It’s also important to note that when crediting Ridley Scott, the films Blade Runner and Gladiator are used, not Alien. Also, I’m happy to see the title of the film slowly build itself through linear connections, as it did in the teaser released in December, and in the 1979 original film.

Michael Fassbender's Penis Still the Talk of the Town