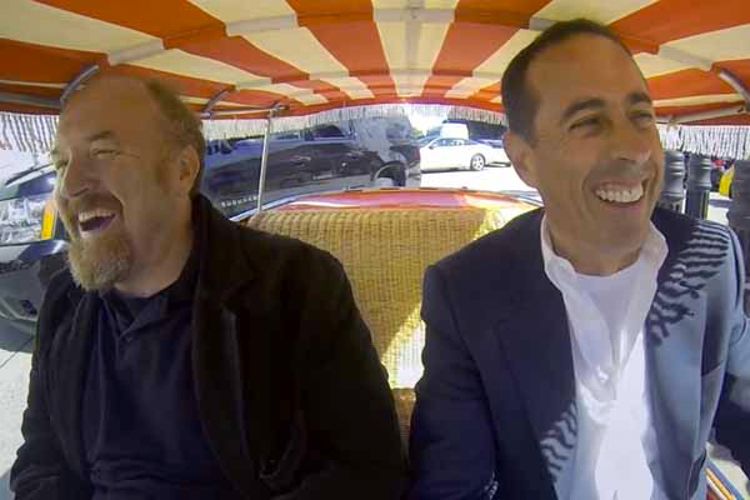 Comedians in Cars Getting Coffee

Comedians in Cars Getting Coffee, Jerry Seinfeld’s clunkily titled web series, is back for a third season with a Louis C.K. premiere. Info obtained: Louis says he’s mulling seven or eight seasons for Louie, Steven Wright hung out while C.K. wrote some new episodes, and C.K. only values two earthly pleasures more than a stoned trip to see a 3-D IMAX movie. News bits aside, though, it’s just nice watching these guys spend some laid-back time together. They should really do this more often, shouldn’t they?

Speaking of Louis C.K.: Never has his term for multiple penises — penasia — been so apt as with this Reddit AMA. (No NSFW photos embedded in the actual post, although they’re linked. And the content’s dicey for the workplace, maybe? Claim your destiny.)

Here’s your first look at Guardians of the Galaxy, complete with Chris Pratt, a green Zoe Saldana, and the space-raccoon.

And here is your first look at Christian Bale as Moses in Ridley Scott’s Exodus.

Beyoncé update: Beyoncé sold 1.3 million copies in its first 17 days and topped the Billboard 200 for a third straight week. That’s the first time an album has three-peated since April 2013. It’s also “the first album since 2009 to sell more than 300,000 copies in each of its first three weeks.”

So many mellow-harshing arrests at Phish’s four-night stand at Madison Square Garden.

Someone ate only at Starbucks for a year without transforming into a stale, mysterious treat that may or may not have been a scone.

Coinye West. Try — just TRY — to guess what you’re getting into before you click that.

Shia LaBeouf's Defense of His Blatant Plagiarism and Disingenuous Skywriting, in His Own Words