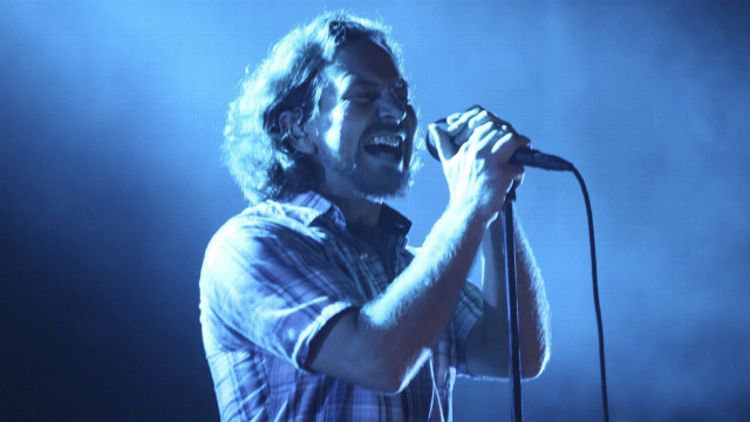 Friday’s great, then sucky, then totally triumphant Pearl Jam concert at Wrigley Field threatened to go off the rails at approximately 10:59 p.m. The show had been delayed due to thundershowers for two hours, and everyone around me was pounding beer like it was Oktoberfest in Munich. I was seated in the 200 level and tucked deep below the upper deck, which on this night meant I was among the lucky ones. A friend who snagged a general-admission seat on the field was herded into the concourse area and forced to stand inside a densely packed multiheaded organism composed of sweat and dude for an extended period. Meanwhile, I had a hot dog stand stocked with food, beverages, and other essentials fewer than 10 paces behind me. There are worse places to be stranded.

But even in our relative comfort, one of my compatriots in section 219 cracked. This woman in the row in front of me suddenly started bawling — I’m talking serious “climax of Terms of Endearment”–level weeping here. Maybe it was the humidity. Maybe it was too many cups of Old Style. Or maybe it was just frustration over the fact that Pearl Jam had finished only its seventh song of the night — a heartstrings-yanking rendition of “Elderly Woman Behind the Counter in a Small Town” that had the sold-out house belting out every word — 120 minutes ago (and counting). Pearl Jam fans had traveled from all over the country (hell, all over the world) for this one-off concert. It was consciously presented as an event, and the band lived up to the promise of the evening during its short set before the postponement, balancing deathless classics like “Release” and “Nothingman” with obscurities like the B side “Hold On.” The faithful had waited months for this night, and now they were forced to wait some more. This was either going to turn out OK, or not OK.

Fortunately (incredibly?), most people refused to let the temporary setback get them down. Even as the wait for Pearl Jam lasted until just before midnight — an interruption of almost three hours — the audience kept it cool when cool-keeping was required, and then exploded with energy when it was time to expend explosive energy. It was, frankly, a pretty amazing reaction considering how uncomfortable the conditions were at times. The response was even more impressive from Pearl Jam, who shook off three hours of muggy grogginess and proceeded to play one of the best stadium-rock shows I’ve ever attended well into the early hours of Saturday morning.

I had previously seen Pearl Jam only once, back in 1998 when the band was touring in support of Yield. The full-circle vibe of the night was sealed for me on a personal level when the band sprinkled a generous sampling of Yield tracks into the 32-song setlist, playing five songs from the album in all. (I’m not even that crazy about Yield, but I’m open to reconsidering that opinion.) Fifteen years ago, Pearl Jam was an exciting if insecure arena act. The group had already voluntarily surrendered the title of world’s most popular rock band, after the prolonged battle with Ticketmaster and the willful weirdness of 1996’s No Code. But Eddie Vedder still seemed like he hadn’t yet fully accepted his status as a man who sings for thousands (rather than dozens) of people at a time.

“All that’s sacred / comes from youth” was the thesis-statement lyric of Pearl Jam’s first five albums, but the line from “Not for You” never rang true. Pearl Jam has always treated the old as sacred. It started early on with the hero worship of classic-rockers like Neil Young and Pete Townshend, and continued through a (prescient) preoccupation with vinyl, pirate radio, and a principled anticorporate ethos that was straight out of the ’60s. All the while, you could sense that Pearl Jam (particularly Vedder) coveted the gravitas of journeymen in their forties and fifties when they were mired in their rock-star twenties. (In the aftermath of his collaboration with the band on 1995’s underrated Mirror Ball, a gently sardonic Young remarked, “In some ways, Pearl Jam seems older than I am.”)

Pearl Jam’s love of old things hasn’t dissipated over the years. Wrigley Field is the comfiest old thing they’ve repurposed yet, and playing the Friendly Confines provided an excuse to trot out Mr. Cub himself, 82-year-old Ernie Banks, who gamely waited out the rain to appear onstage during the first song of the post-delay set, Vedder’s likably mawkish Cubs fan ode, “All the Way.” What’s different now is that the members of Pearl Jam are finally the fortysomething rockers they’ve always wanted to be, and the stature they once longed for is no longer affected, it’s fully earned. Pearl Jam belong on the very short list of stadium rockers (with Springsteen and U2) who seem loose and comfortable on the biggest stages, which creates an illusion of intimacy that makes spaces the size of several city blocks feel like very large living rooms.

Pearl Jam’s set was constructed as a finely curated (and fanboy-favoring) tour through the band’s history. Obvious crowd-pleasers like “Jeremy” and “Alive” were set aside — the latter because the weather suspension forced several songs to be cut from the concert — in favor of deep cuts like the rarely performed “Bugs” off of Vitalogy and (my highlight of the night) Mother Love Bone’s epic “Chloe Dancer/Crown of Thorns,” the grunge “Stairway to Heaven.” (There were also two never-before-played-live new tracks from the band’s forthcoming album, Lightning Bolt.) Pearl Jam also played the requisite homage to rock history with a captivating cover of Pink Floyd’s “Mother” and the usual encore staple “Rockin’ in the Free World,” which ended the night in reliably uplifting fashion.

All the while, Pearl Jam sounded massive yet approachable, with much of the massiveness coming courtesy of the night’s musical MVP, Mike McCready. Traditionally the band’s most metal band member — in Pearl Jam’s early days, his blouse-y wardrobe was very “Slippery When Wet era Richie Sambora” — McCready spent most of the night adding shredding guitar solos to the likes of “Why Go,” “Rearviewmirror,” and (my other highlight of the night) “Porch.” (Later, McCready went full-on metalhead guitar hero and covered Van Halen’s “Eruption.”)

By the time 2 a.m. rolled around, Pearl Jam finally had to exit the stage lest they be kicked off by city officials. Wrigley was still packed — if fans had been promised a few more hours of music later on Saturday morning, I’m sure most of them would’ve stayed. With Pearl Jam, the wait (and the weeping) is worth it.

Filed Under: Pearl Jam, We Went there

Dan Harmon on Donald Glover: 'We're Gonna Make Eye Contact With the Tragedy That Is His Departure'