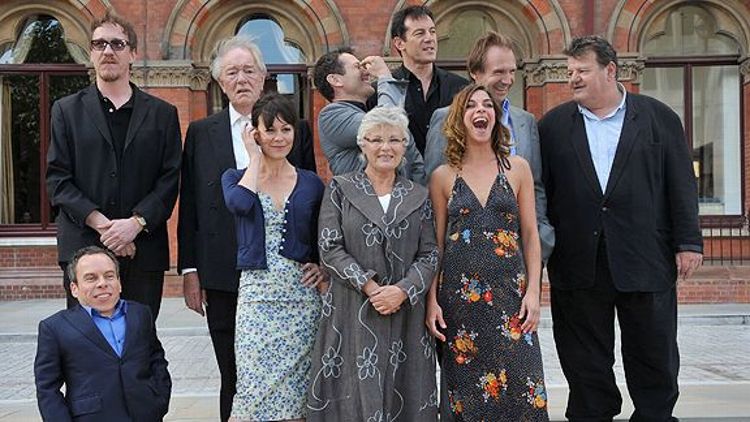 This week, with the release of Harry Potter and the Deathly Hallows: Part 2, one of the greatest stories of our time comes to a close. Not the saga of a bunch of kid wizards, of course. We mean the epic tale of how a generation of lauded British character actors spent a decade banking Hollywood bucks, trading Masterpiece Theater for Maseratis, and providing their agents with the sorts of commissions usually received only from tanner, better-teethed clients. Think about it: The roster of talented accents that have cycled through Hogwarts Academy reads more like a summer production of Cymbeline than the cast of the highest-grossing film series in history. There’s the old guard (Michael Gambon, Maggie Smith, John Hurt, Julie Christie) plus a dependable crop of Miramax costume-drama all-stars (Emma Thompson, David Thewlis, Timothy Spall, Richard Griffiths, Jim Broadbent, Kelly Macdonald, Brendan Gleeson) and enough well-aged ham to fuel a busy bodega at lunchtime (Ralph Fiennes, Alan Rickman, Gary Oldman, Helena Bonham Carter). Even Warwick Davis got in on the action, and he didn’t have to dress up like a rabid teddy bear in the process! Real talk: If you graduated from RADA, or once shared a bed with Kenneth Branagh, and didn’t get rich off these movies it might be time to get new representation. (Hold your head up, Richard E. Grant! Stay positive, Simon Callow!)

The Harry Potter movies represent the U.K.’s most successful experiment with socialism since health care — and now it’s over. But because those holiday homes in Cornwall aren’t going to pay for themselves, we’re here to suggest the paycheck parts these extremely serious thespians ought to target in order to keep the pounds pouring in — and keep those offers for Merchant Ivory movies going straight to voicemail.

For an actor, the pros are considerable: gorgeous, exotic locations and lush scenery (all the better to chew on!), sexy arm-candy (ditto!), with only the minor inconvenience of being inevitably cuckolded and then killed in a gruesome manner by Daniel Craig or, eventually, Robert Pattinson. (Translation: no sequels!) Bonus points to Ralph Fiennes for knowing which way the trade winds were blowing and signing up to be creatively dispatched by 007 sometime in 2012! It’s that kind of thinking that will keep you out of the (shudder) theater for years to come!

At this point, slapping on some prosthetic ears or Klingon face paint is as much a part of British acting tradition as pretending to read Joyce or developing cirrhosis of the liver. Who among us could forget Christopher Plummer’s defiantly-unkosher turn as the Shakespeare-loving (!), Romulan-ale-quaffing, backstabbing Klingon General Chang? (Other than Plummer, himself, who was no doubt sipping something stronger than synthehol to get through the long days in the makeup chair.) Usually, though, these roles require very little other than a couple of plastic ridges on your nose, a working familiarity with phasers, and the ability to say the word “dilithium” with a straight face. After that, just kick back and let the residuals — and convention invitations — pour in.

Nothing says “smart,” “foreign,” and/or “menacing” to the average American moviegoer than a crisp Eton accent. So what better way to maximize your good breeding (and/or personal Henry Higginses) than by playing a suspiciously non-Teutonic Nazi in a great big Hollywood war picture? A whole host of versatile limeys reaped beaucoup studio bucks in 2008 by agreeing to strap on the SS boots opposite Tom Cruise and whatever accent it was that he was doing in Valkyrie. And there’s sure to be more where that came. The only thing we Yanks hate more than a smarty-pants furriner? Subtitles.

OK, this one is mainly for Warwick Davis. But, Emma Thompson, if you’re interested, holler — we can get a rewrite!

Nothing could be more American than the hallowed Framers of the Constitution. However, few things are less American than the actors usually hired to play said Framers in HBO miniseries and Steven Spielberg movies. Sure, Paul Giamatti had the lead in the overly rewarded John Adams — but with his lousy looks, elite reputation, and history of cashing-in, he’s practically an honorary Brit! Besides, it was the well-compensated, well-coiffed quartet of would-be Red Coats Tom Wilkinson (Benjamin Franklin), Rufus Sewell (Alexander Hamilton), Stephen Dillane (Thomas Jefferson), and Danny Huston (Samuel Adams) that truly classed up the proceedings. We may have won our independence, but our dependence on overpaying for talent has never been greater!

Critic-Proof Chainmail in a Comic-Book Movie

A real growth industry and one our orphaned Potter stars would do well to investigate. Marvel in particular realized early on that if you’re trying to sell a skeptical, nerd-averse populace on a universe filled with gamma bombs and an apparently limitless supply of blue mutants, it’s best to hire a bunch of cash-poor Shakespeareans to do the selling. So what if Sir Anthony Hopkins looked ridiculous with a gold-foil eye patch and a Nordic mullet in Thor — he sure looks comfortable resting on a beach in Maui thanks to that Asgard-sized paycheck he pocketed! With Marvel cranking out movies as fast as the Multiple Man can write them, there would seem to be a surfeit of opportunities for English actors desperate to trade the gray skies of home for the warm, wealthy West Coast. It’s a simple quid pro quo, really: They bring their patina of respectability to parts like Kang the Conqueror and Paste Pot Pete, and in return they get boatloads of quid.

Think about it, underpaid actors of England! Just because “it” all ends doesn’t mean your life of leisure should have to go with it.