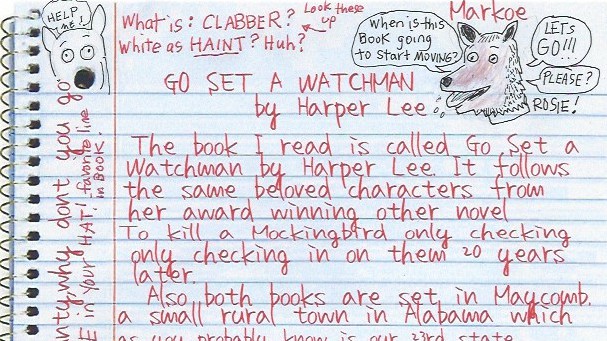 The book I read is called Go Set a Watchman by Harper Lee.

It follows some of the same beloved characters from her award-winning novel, To Kill a Mockingbird, checking in on them about 20 years later.

Both books are set in Maycomb, a small rural town in Alabama, which is our 23rd-most populous state. Although Alabama was not known as an intellectual center in the mid-1950s, which is when this book takes place, Harper Lee describes the town as “saved from being another grubby little Alabama town by the proportion of professional people.” Then she spends the rest of the book giving detailed examples of how the town is packed full of annoying, empty-headed racists.

The main character of the book is Scout from To Kill a Mockingbird, who is now 26 and calling herself Jean Louise, a very unfortunate name change in my opinion. She has come home for a visit with her arthritic 72-year-old father, Atticus Finch: a lawyer who is beloved far and wide as the big-hearted civil rights advocate from To Kill a Mockingbird. Atticus now lives with his status-obsessed snob of a sister, Aunty Alexandra, who Jean Louise refers to as “the enemy.”

Jean Louise sees that many things have changed in Maycomb in the years she has been living in New York. Her brother Jem has died. Her childhood friend Hank wants to marry her, which she’s not really into. However she is 26, which in 20th century years was like our present-day 46, so she is thinking, “I guess I should do it. I’m really getting up there.”

However, Aunty Alexandra is against it. “We Finches do not marry redneck white trash,” she says, which as you will see turns out to be kind of a whacked thing to say considering where this story is headed.

Unfortunately it is not until 37 percent Kindle that Jean Louise finds a racist pamphlet from a Citizens’ Council at her dad’s house and the book finally starts to get going. The pamphlet is full of the N-word and warnings about “mongrelizing the race.” Back in the 1950s, people were very fearful of “mixed race marriages” because they didn’t know yet that it was going to lead to a world full of incredibly hot-looking people like Halle Berry, Lenny Kravitz, and Rashida Jones. Also our 44th president, President Barack Obama.

Reading the hateful pamphlet makes Jean Louise feel sick to her stomach. But when she goes to throw it in the garbage, Aunty tells her to stop. “There are a lot of truths in that book,” she says.

Jean Louise is so disturbed by this that she sneaks in to one of these council meetings, where she is majorly grossed out to see not only her dad but also Hank getting all chummy with a bunch of completely disgusting racists.

Jean Louise, who, like everyone, grew up reading To Kill a Mockingbird, now realizes for the first time that her father is not the same Atticus Finch that he was in that book. Everything she knows to be true in her life now seems like a lie. She is so sickened by this that she vomits. This is just one of the emotional vomitings in this book. I counted four. All are caused by racism, not a stomach flu or other virus.

From this point on, the book focuses on a young woman trying to come to grips with the fact she belongs to a family full of grotesque poseurs.

Although there are also a lot of flashbacks to Jean Louise’s funny childhood (like the time she thought she was pregnant because someone kissed her, and the time she wore falsies to a dance), to be honest, I would have enjoyed them more if they were connected to some kind of story. Any kind of story. Seriously, by 50 percent Kindle I was starting to get that sick feeling like when you have paid to see a movie and you can tell in the first 15 minutes that nothing good is going to happen for the next hour and a half.

By 60 percent Kindle I was going, “Please, Harper Lee, make Jean Louise kill someone or let her discover that the racists are also running a child molester ring. Or how about if all of them fall into a portal from another dimension?” 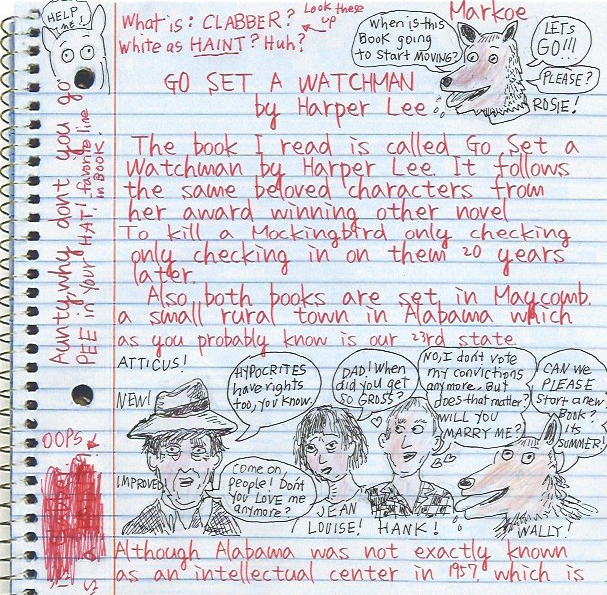 Finally, by about 85 percent Kindle, Jean Louise confronts Atticus about his new personality and is shocked when he admits that he doesn’t believe all men should be allowed to vote and he does believe that black people shouldn’t be allowed on juries. He says to Jean Louise, “Do you want Negroes in our world?” to which she totally should have said, “No, Atticus. You are right. Let’s just have a world full of white lawyers. That will work out so much better. Could the whole bunch of you possibly be more basic?”

Before the book ends, Jean Louise also calls her pseudo-fiancé, Hank, “a scared little man” and “a hypocrite.” However, Atticus defends him, saying, “Hypocrites have just as much right to live as anyone.” To which Jean Louise was probably all “Perfect! Thank you, Atticus. Again you have shown me the path so at last my fantasy can come true. I will finally have the chance to get married to a hypocrite. Pinch me, I must be dreaming.”

The main point of Go Set a Watchman is that Jean Louise must learn to accept that her father is just a man. He is flesh and blood, and that means he has earned the right to be flawed. Her uncle warns her that she must not confuse him with God. (But in my opinion, Atticus has had such a personality change since he was a young man that if he were my father, I might insist that he go in for a full physical and a brain scan.)

Summing up, I do not really recommend that you add Go Set a Watchman to your summer reading list. If you must read one Atticus Finch book this summer, why not re-read To Kill a Mockingbird. And while you do, remind yourself to be glad that J.D. Salinger died before he wrote a sequel to The Catcher in the Rye about how Holden Caulfield turned into a sexual predator and Phoebe was arrested for elder abuse.

Filed Under: Books, Go Set a Watchman, Harper Lee, To Kill a Mockingbird