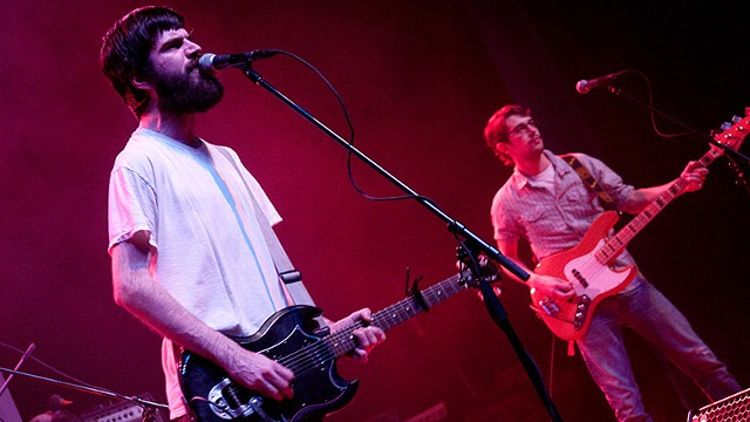 On Monday, Montana newspaper the Missoulian ran an interview with Titus Andronicus’s Patrick Stickles, who divulged the New Jersey punk band’s plan to record a rock opera featuring more than 30 songs. He also discussed the plot: Basically, it’s going to be about a guy who’s descended from a cursed race of ancient superhumans and who falls in love with a mortal human girl. But it’s really about Stickles’s own manic depression. Titus Andronicus is already playing a song from this opus live, and it’s awesome. The album and corresponding film are tentatively slated for a November 2014 release, and you can pre-order the package here.

This all makes me very excited, for three reasons: First, I’m a Titus Andronicus fan. Second, I love rock operas. More accurately, I love the idea of a band deciding to make a rock opera. There’s just something so anachronistically epic about it. It’s like announcing one’s intention to ride a horse from Montana to Texas in order to collect the bounty on a dastardly cattle rustler.

Third, I have a half-baked rock-crit theory that all of the best rock operas are about mental illness.

This is certainly true of the Who’s Quadrophenia and Pink Floyd’s The Wall, which are generally considered to be the best rock operas by people who care about ranking rock operas. Both records’ protagonists are schizophrenic. It’s also true of the Pretty Things’ 1968 album S.F. Sorrow, a relatively little-known (but great) rock opera that was a primary influence on Pete Townshend when he was writing Tommy, which is about a young man who is struck deaf, blind, and mute by post-traumatic stress disorder. In S.F. Sorrow, the titular character is emotionally scarred by fighting in World War I, then pushed into full-on catatonic depression when his fiancée is killed in a Hindenburg-like disaster. This specific plot point — dude driven to the edge of mania by the tragic death of his love interest — has recurred in several other rock operas. It happens in Hüsker Dü’s Zen Arcade (in the song “Pink Turns to Blue”), Queensrÿche’s Operation: Mindcrime (“The Needle Lies”), and Fucked Up’s David Comes to Life (“Running on Nothing,” though it’s heavily foreshadowed before that).

The theory applies to second-tier rock operas as well. I’m not suggesting that the main character in Jesus Christ Superstar is crazy, per se, but he is perceived to be crazy by authorities who don’t believe that he’s the son of God. This is also true of David Bowie’s The Rise and Fall of Ziggy Stardust and the Spiders From Mars, which is about a rock star who communicates with aliens. (This is commonly known as “cocaine psychosis.”) Lou Reed’s Berlin is primarily concerned with depression and suicide, and may in fact induce both if played too many times consecutively. Mastodon’s Crack the Skye is about a paraplegic who travels outside of his body and goes to space and gets sucked into a spiritual realm through a wormhole (I think), but it’s really a metaphor for drummer Brann Dailor’s sister, Skye, taking her own life as a teenager. In Genesis’s The Lamb Lies Down on Broadway, the story’s hero, Rael, has his penis removed to prevent the process of turning into a Slipperman, which is insane even if it’s not explicitly about insanity.

I realize this theory isn’t perfect. It doesn’t appear to fit with the Kinks’ Arthur, Drive-By Truckers’ Southern Rock Opera, or Green Day’s American Idiot — though those albums don’t really have discernible plot lines of any sort. This is also why I can’t confirm (even though I highly suspect) that Marilyn Manson’s Antichrist Superstar is about some form of psychosis.

Still, there’s definitely a pattern here, and I’m sure Stickles is already aware of it. He’s known as a committed student of classic-rock history. When the Replacements played their reunion show last month in Toronto, Spin dispatched Stickles to review it and he wrote 9,000 words, which sort of puts his 30-track rock opera in perspective. If Stickles decided to forge a different career path, he could take over Eddie Vedder’s job as a perennial speechmaker at the Rock ‘n’ Roll Hall of Fame induction ceremony.

So the question isn’t whether rock’s reigning librettists are continually drawn to mental illness as a subject matter, but rather why? I have three possible answers:

1. Rock operas are made for teenagers, who almost always feel at least a little depressed and/or manic.

2. Rock operas are made by musicians who might actually be mentally ill or imagine that the intensity of being in a successful band is a form of mental illness.

3. Rock lyricists are not original.

Whatever the case may be, I’m psyched for the upcoming Titus Andronicus rock opera. Based on my rock opera research, I feel confident guaranteeing it will be amazing.

Barbarians at the Gate: Plants vs. Zombies 2, Kingdom Rush Frontiers, and Rymdkapsel