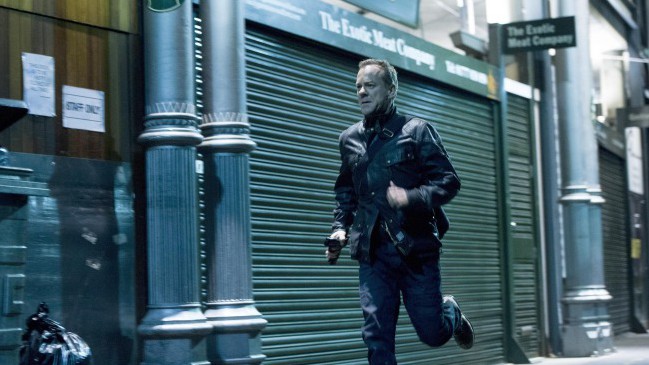 When we left, Jack was chasing Benny Bratts through London, but the mole slipped away. So Bauer calls Lil Bauer The Kate and breaks the news to her that Bratts has been the bad guy all along. And that Bratts has the override device. Jack needs backup.

At the same time, Bratts calls Adrian, tells him he has the device, and says he needs to know the plan for getting transport out the country. While Adrian’s on this sketchy call, Chloe does what any curious, quasi-trusting significant other would in this moment: She listens in. I wonder what lie Adrian’s going to throw Chloe’s way. 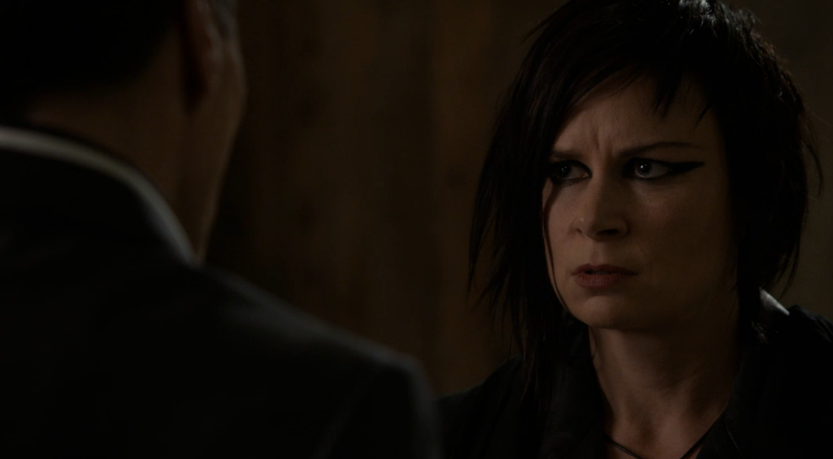 Adrian: “I’m taking the override back.”

Well, then. At least he’s not a liar.

And Chloe was all: 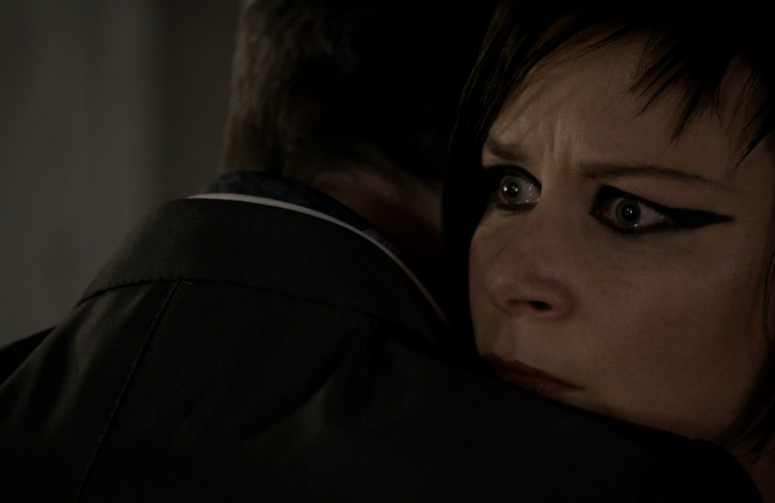 While both are confused looks, the main difference is that her eyes also scream, “I think I’m dating a terrorist, uh-oh!”

Back to Jack, and he’s still looking for that TAC team. And then, surprisingly, he spotts Benny Bratts. And, again, we’re off to the races.

As noted in the last hour, Benny Bratts is a hell of a runner. Like a peak-career Tom Cruise runner. Even though Bauer has bested death more than 50 times, I’m not sure he’s ever chased after someone who runs a 4.22 40-yard dash. And things only get worse when Bratts knocks out an officer and winds up with this in his hands.

Benny Bratts shoots at Jack, Jack dives behind some perfectly placed kegs, Bratts ditches the gun, and the chase continues. This guy Bratts really wants to get the device to Adrian so he can get out of the country. He’s so set on it that he didn’t even stop to get a burger. 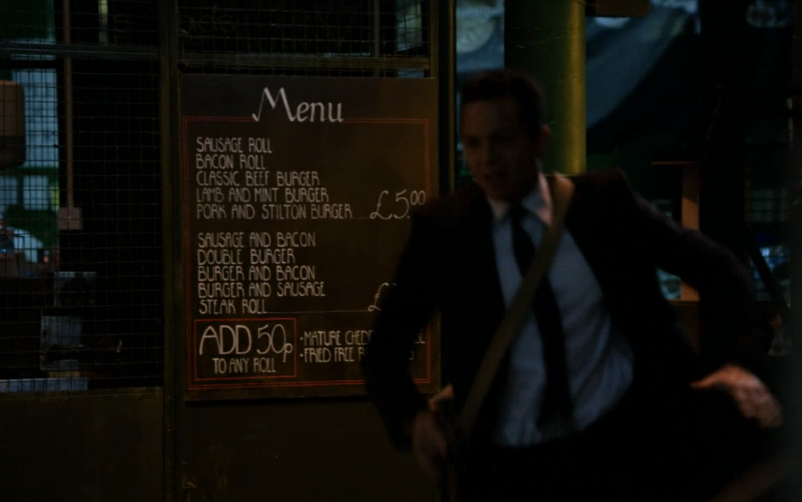 How often do you get Stilton cheese on your burger? What a legendary cheese. Remember what Orwell said that one time about Stilton cheese? You remember, in his essay “In Defense of English Cooking”:

Then there are the English cheeses. There are not many of them but I fancy that Stilton is the best cheese of its type in the world, with Wensleydale not far behind.

All of this to say: Benny Bratts really must want to get out of the country, if he’s passing up this cheese.

He finally reaches the meeting point with Adrian, picks up an envelope that has his travel documents, drops off the override device, and then asks Adrian where his getaway car is. It’s at this point that Adrian hangs up the phone. Because he no longer needs Benny Bratts. And if I were a betting man who bets on Monday-night Fox dramas, I’d say the travel documents in that envelope were six printouts from MapQuest and a passport that only works at Epcot. 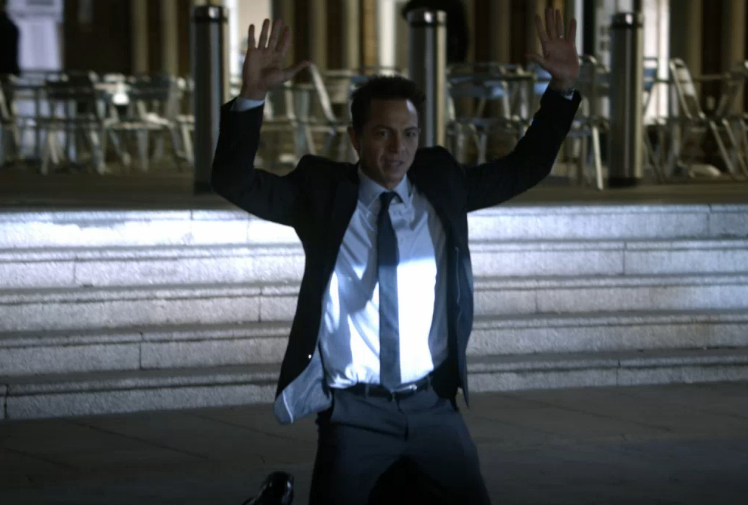 Unfortunately, Adrian still has the device. And he’s with Chloe, which is sure to complicate everything. Jack chases them, but the train they hop on leaves before Jack can board. 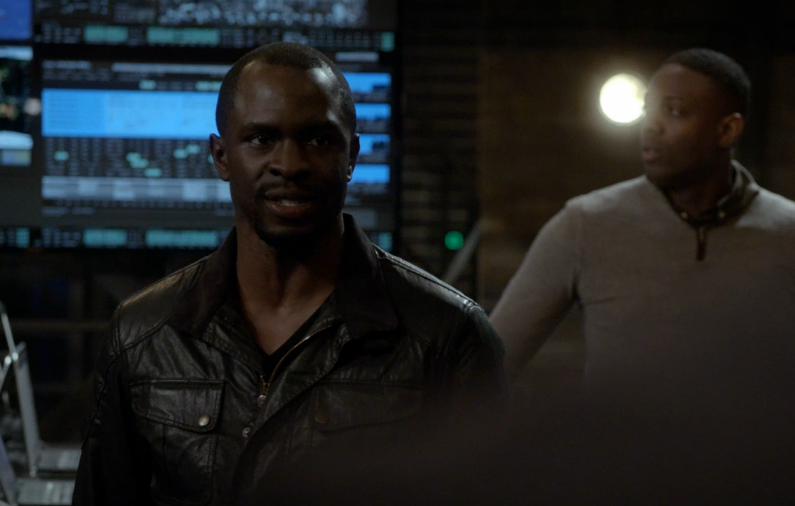 I’ve thrown a lot of attitude his way over the past nine hours and 48 minutes, but I’m proud of Ritter. Sure, he’s only moments from messing up, but good for him. You know, black actors.

After this, we go make a visit to President Heller. He’s about to take a shot of whiskey and Audrey walks in and tells him not to drink with his medicine. And then Heller pulls a top-five Heller-is-my-homeboy move. 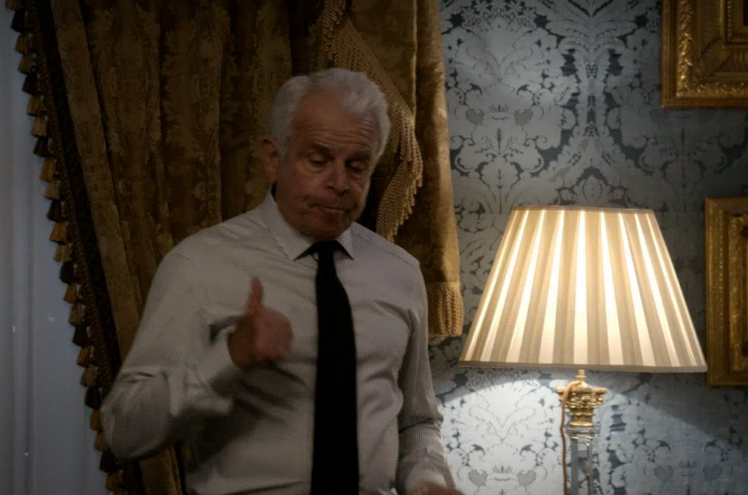 This thumbs-up means “Hey, Audrey, let a player live. I almost let a terror woman guide a missile into my face.”

Back to CIA and a terrible thing comes to light. The New Analyst Who Replaced the Old Analyst Who Knew Too Much finds out that Benny Bratts is the one who sold secrets to the Chinese, not Lil Bauer The Kate’s husband. As this is happening, Benny Bratts gets transported in. And when Lil Bauer The Kate sees him, this look appears in her eye that lets you know she’s about to kill him. But Ritter sends her to her room to cool off.

And then Bauer enters. And tells Ritter that it’s important he talk to Bratts, because Bratts isn’t scared of Ritter or anyone else he used to boss around. And then magic happens: 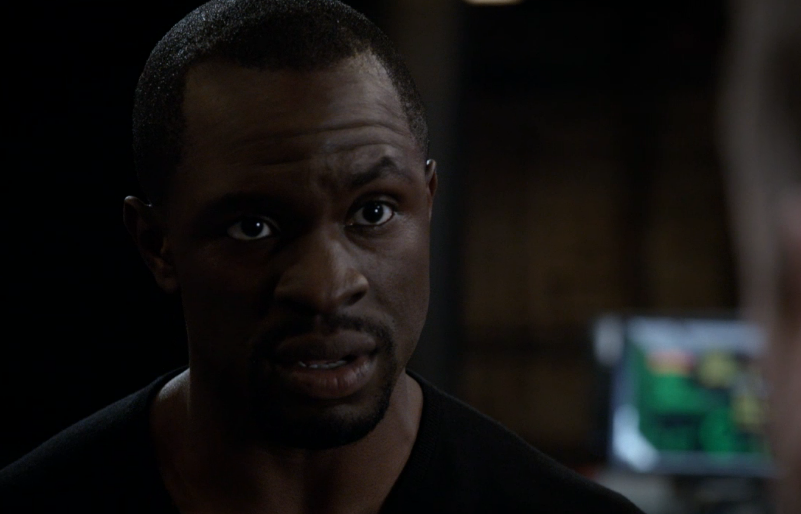 Ritter: “OK. OK, you can talk to him. As soon as he’s set up in interrogation. But if you cross the line, I’m pulling you.” 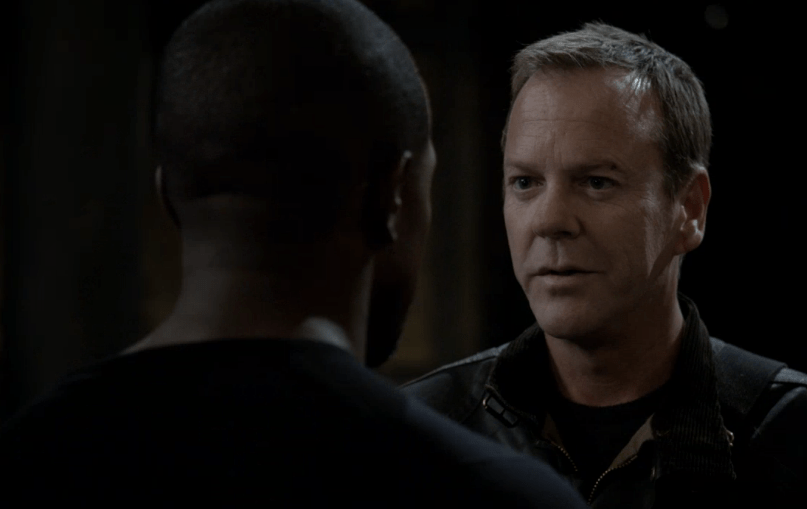 Jack: “Just so we’re clear, I wasn’t asking. That was just me being courteous.” 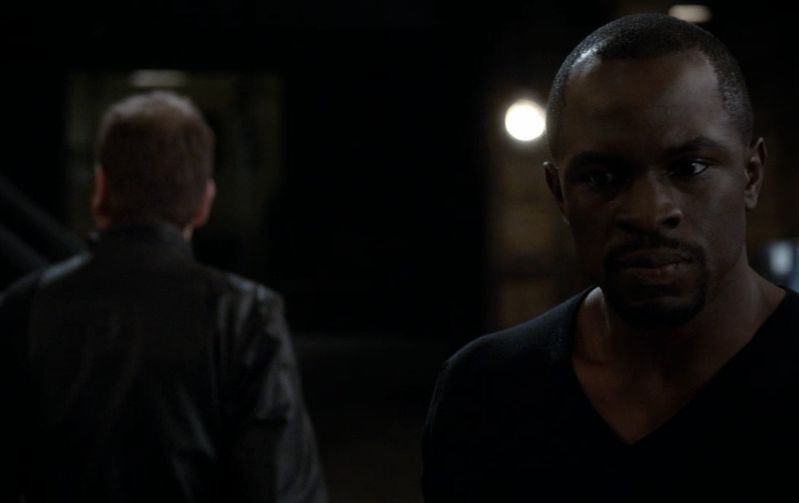 Had to pause the episode and go take a walk. Because that was the 24 equivalent of getting stepped over in the NBA Finals.

And yes, from here on out, Ritter will be known as Tyronn Ritter. There’s no other way.

After stepping over Tyronn Ritter, Jack goes and checks on Lil Bauer The Kate. She’s not doing well. You know, since her husband hanged himself because Benny Bratts framed him. Jack tells her that they’re about to interrogate Bratts and that if she needs to take a step back, no one would fault her.

AND THEN, OUT OF NOWHERE, WE GO TO THE SEX DUNGEON. 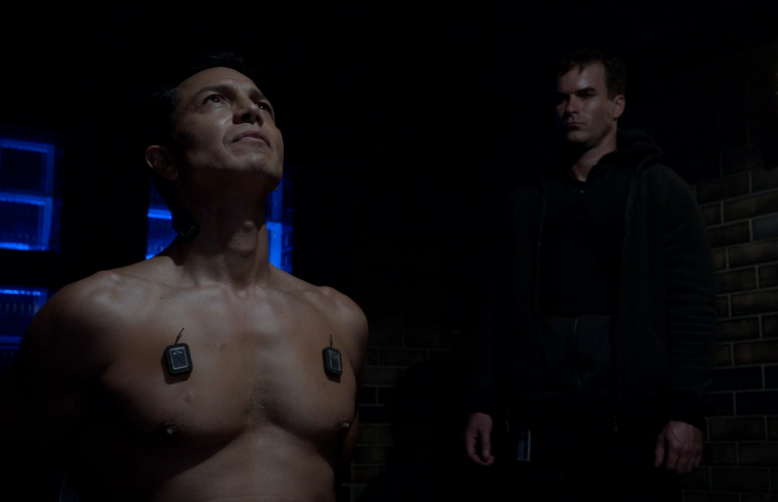 Bauer and Tyronn Ritter are monitoring his readings. Bauer doesn’t care about them, he just needs to go inside. And then magic happens again.

Tyronn Ritter: “As long as you remember the ground rules.” 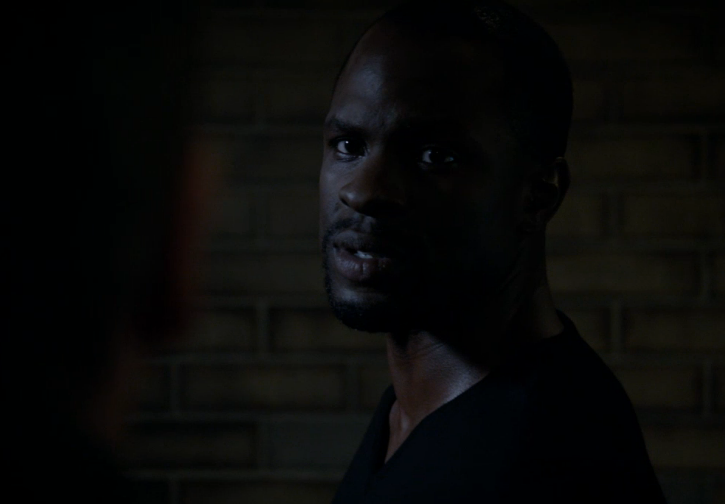 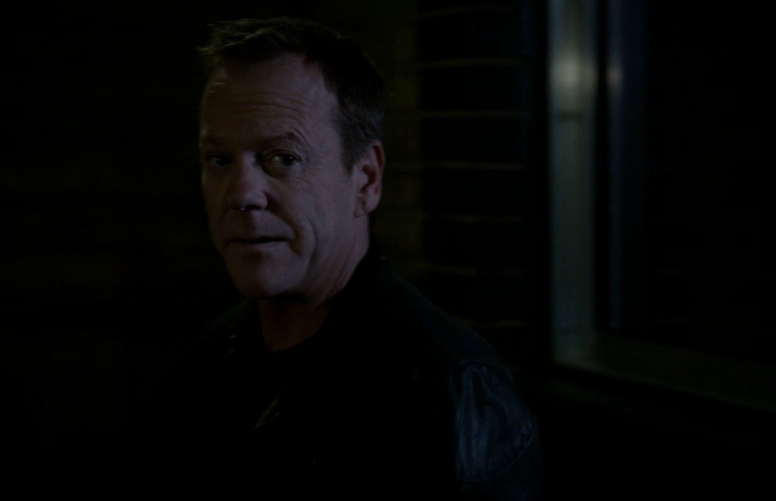 At this point, I wonder if Bauer even remembers his name.

Jack walks into the room, Benny Bratts taunts him, and then Jack starts beating him up. Because that’s how this works. Tyronn Ritter sends in a team to get Jack out of there. Because he’s a coward. Lil Bauer The Kate begins screaming at Bratts, and Tyronn Ritter pushes her away.

Tyronn is steadily playing by the rules, in that he’s actually considering an immunity deal for Bratts. Unfortunately for him, these two are pissed. And more important, they’re both Bauers and they’re pissed.

Back to Camp Heller and we finally get the “Jack Talk” between Boudreau and Audrey. He chastises her, saying that everything’s changed since Jack showed up and Audrey gives the most amazing reply ever: “I made a commitment to our marriage and I intend to honor it.”

I love it. Because that’s code for, “We can stay together and all, but like … Jack’s got this flat in London. And he gave me a key. So I’m going to live there forever and never talk to you again, OK byeeeee.”

And then, just when you thought he couldn’t get any worse, Boudreau actually starts giving the Russians secrets. He tells them exactly how they can track Jack and capture Jack.

Just so we’re clear, Boudreau is committing multiple treasons just because he’s not as swagged out as his wife’s ex. A legendarily petty performance by the Chief of Staff. Because, as the old saying goes, If you can’t beat him, just commit treason and trade him to the Russians.

Next we see Adrian and Chloe. She’s up to something — “something” being one of the worst escape attempts in history. She tries to steal the device and run away, but Adrian stops that plan in a matter of seconds. It’s why you never get involved with a man with a Comp Sci PhD who also wears ascots. Ever. 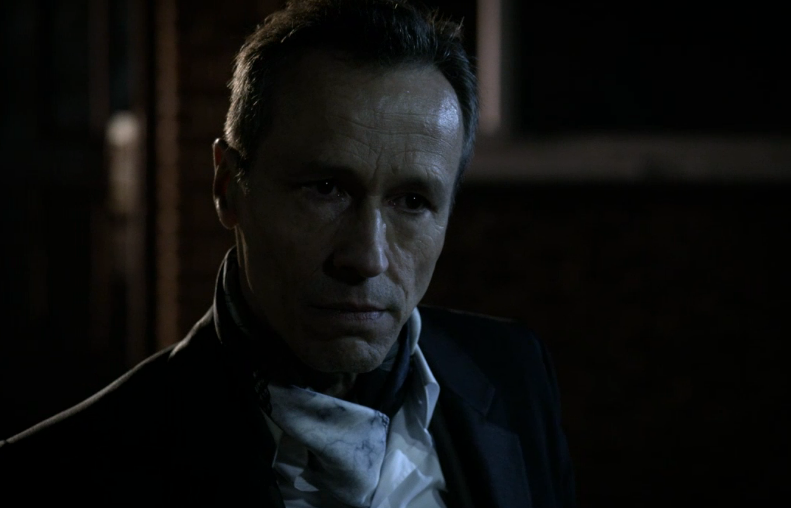 So Chloe gets back into the car. Because she’s in detention. For life.

This isn’t very important, however, because the Bauers are doing whatever they want. Lil Bauer has made her way into the Bratts’s room. And she’s not happy. 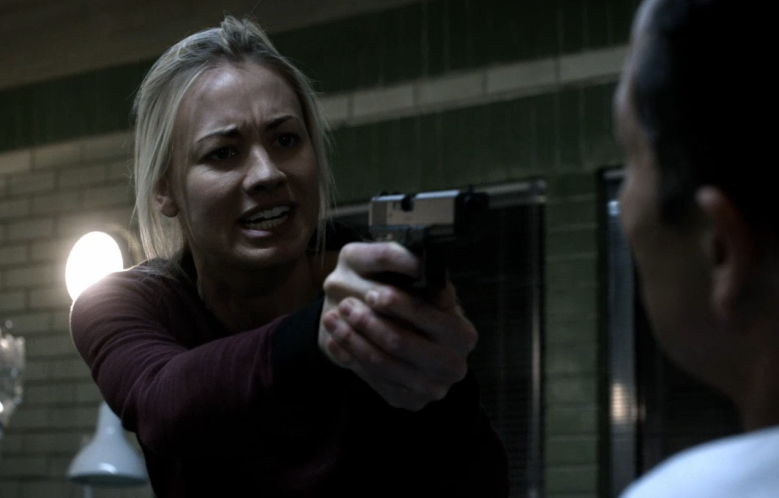 She’s about to kill Bratts. 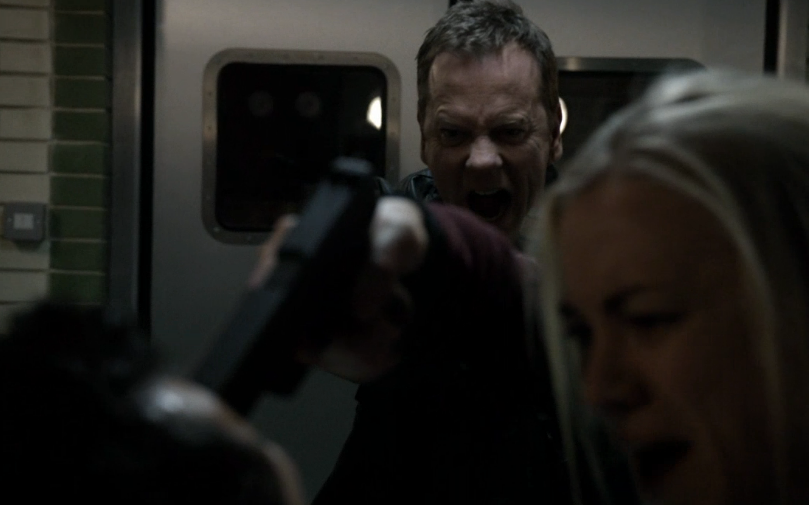 Freaking out, Bratts screams out the tracking number that he put on the device. And instantly, the Bauers stand down.

BECAUSE THEY WERE ACTING. 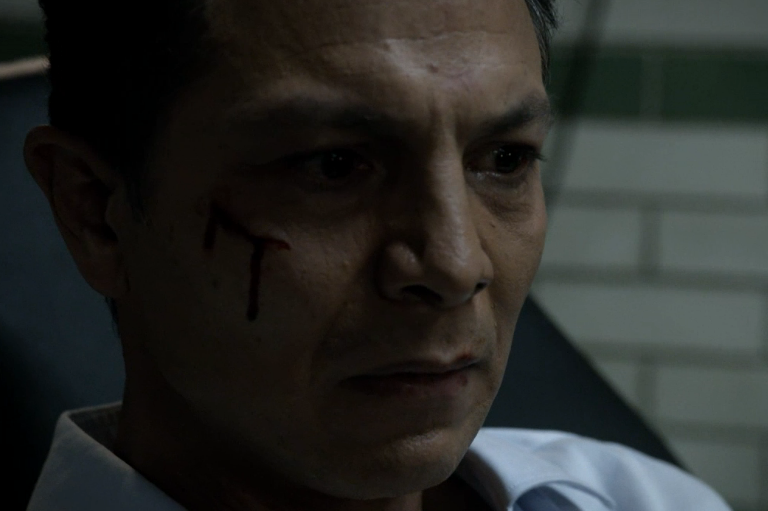 As Lil Bauer The Kate tells him, he’s done.

Leaving the room, Bauer tells Tyronn Ritter that they broke Bratts and then keeps walking. Lil Bauer follows and walks past Tyronn, leaving T. Ritter looking like the kid on the playground who didn’t get picked in kickball. 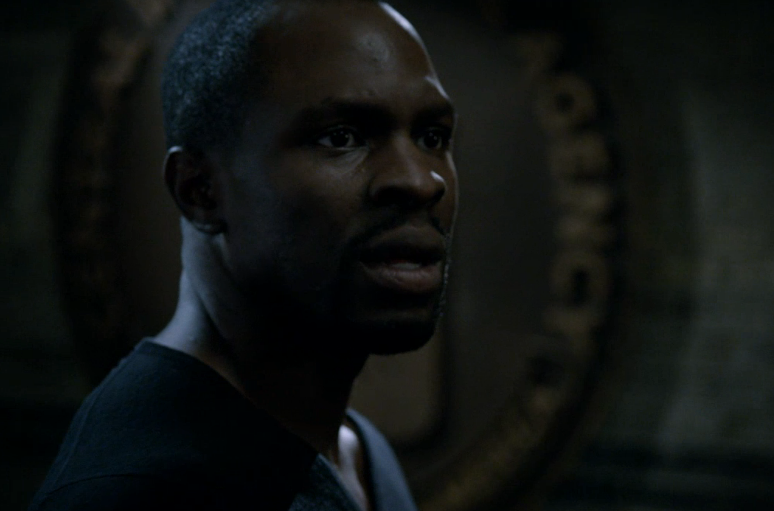 I wonder what his next play is, as “first-in-command.” Maybe send out a promo code for a Groupon? Too early to tell.

At Camp Heller, Boudreau walks into a meeting with the immunity agreement. But Boudreau, out of the loop because he’s always sneaking off to frame Bauer and put America in danger, is told by Heller that they don’t need it. Because Bauer got the information.

And that Bauer’s leading the operation. 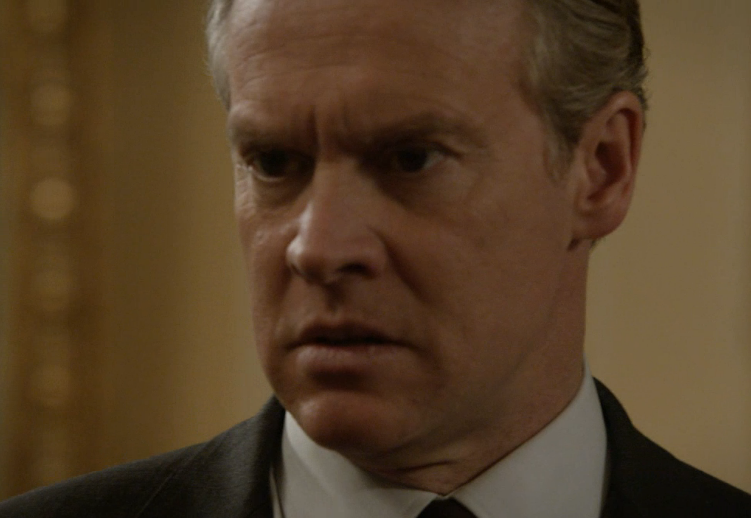 So, again, in case you’ve lost track of how bad he’s made things, don’t forget that Boudreau just sent Bauer’s location to the Russians. Bauer, the leader of the mission to save the world.

Back to the Bauers and they’re in the car, trading war stories about being a Bauer. Lil Bauer is hung up on how she stopped believing in her husband, which is why she thinks he killed himself. And then Jack starts telling Papa Bauer stories, shedding knowledge about how revenge doesn’t ease the pain and how eventually you have to start forgiving yourself.

It’s a life none of us will ever understand. Because we’re not Bauers. 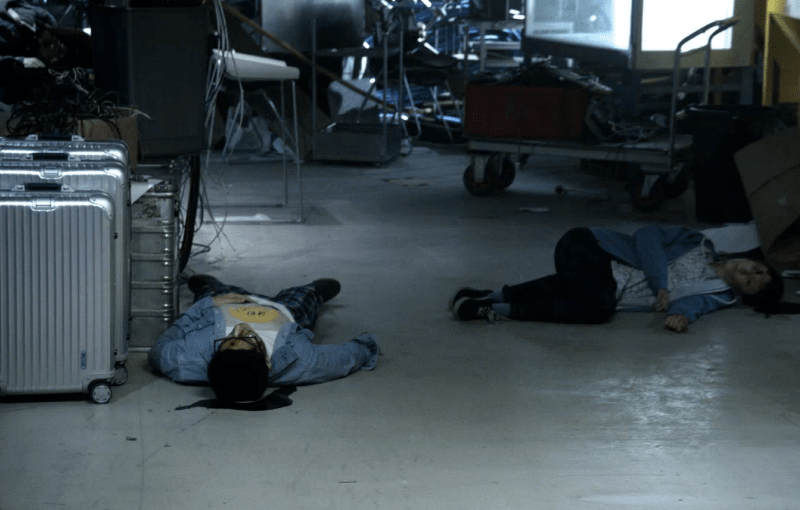 Well, then. What now, Adrian, knower of all cheat codes and wearer of all ascots? How are you getting — 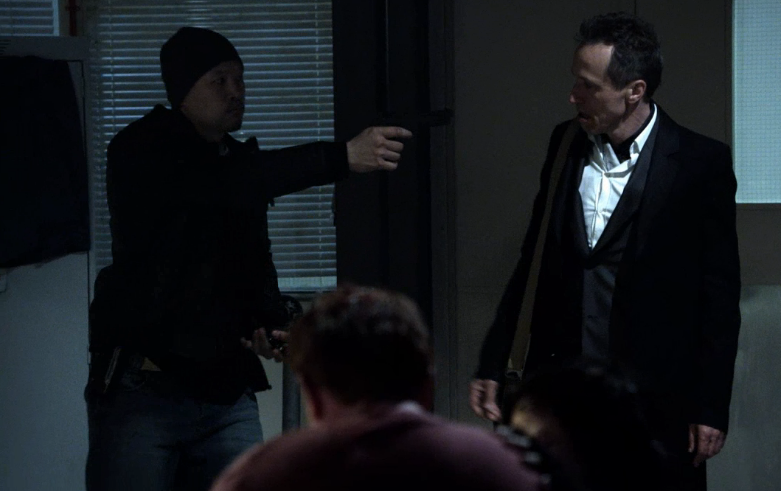 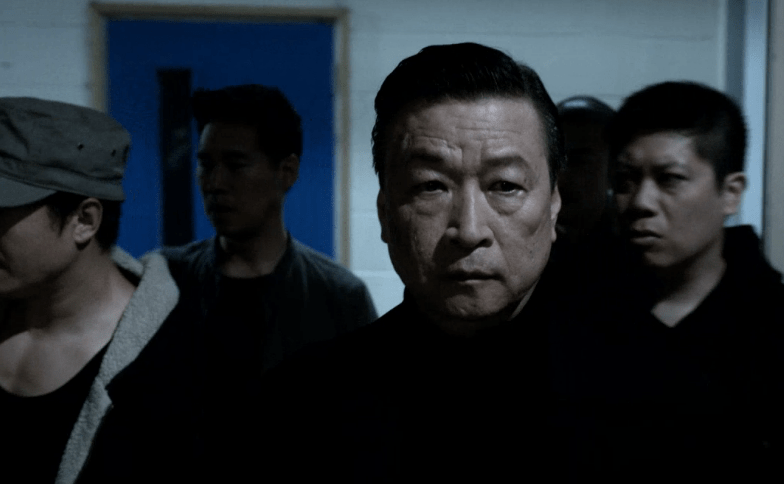 This is so bad. Nothing’s ever been this bad.

And then it gets worse. Because Adrian’s been working for Cheng and needs something on the device modified. And Adrian can’t do it. So Cheng shoots him in the leg. And then Cheng tells Chloe that she has to fix it. 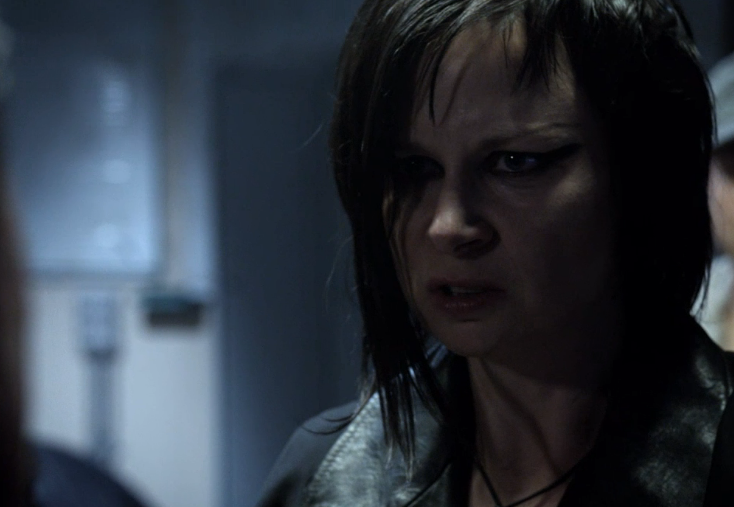 So now Chloe is working for Cheng and the Russians are after Jack.

Oh, and it gets worse. Because Cheng knew Chloe was going to try and insert a virus, which would somehow open the firmware interface that they needed to be super-terrorists. So now Cheng can do everything. And Chloe is no longer needed.

And then Cheng shoots Adrian in the head.

And then a truck crashes into the Bauers’ car, presumably sent by the Russians.

And then Cheng’s men send a message to a U.S. nuclear submarine to fire on a Chinese carrier.

And then the missiles hit the Chinese carrier, BECAUSE CHENG IS TRYING TO START WORLD WAR III. 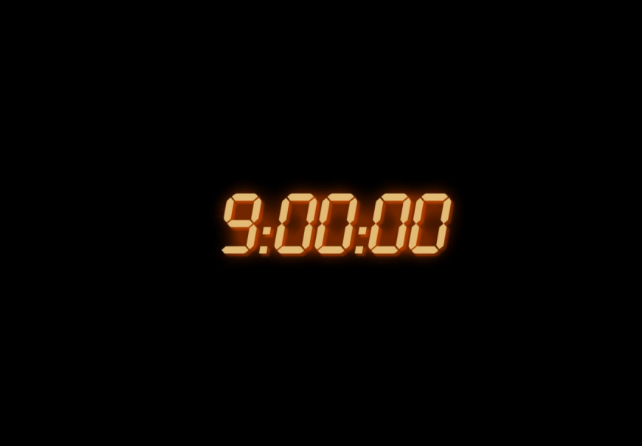 Six Seasons, a Movie, and Another (Yet Another) Rebirth: Yahoo Saves ‘Community’