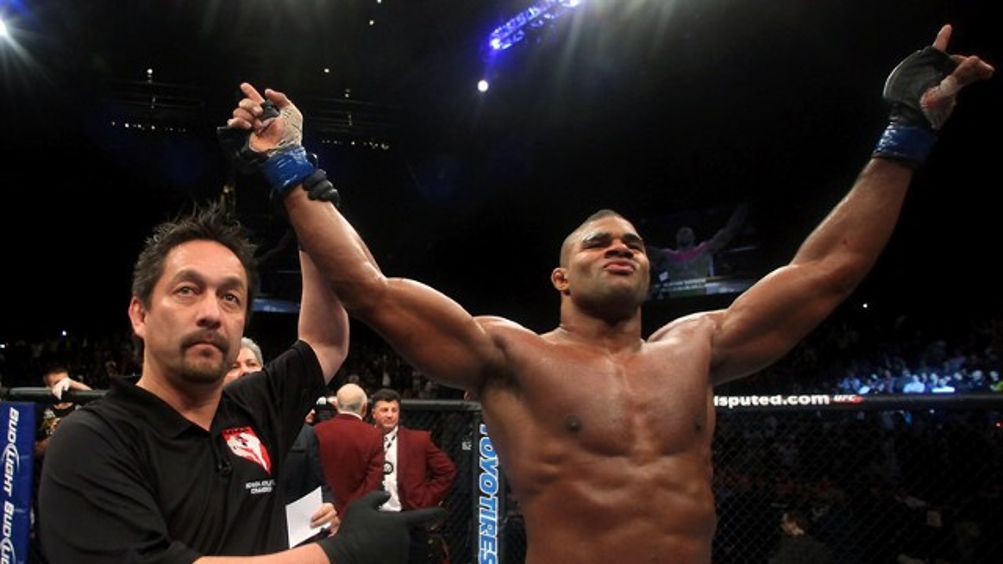 Moments into the December 30 battle between the two biggest heavyweight fighters in the history of the Ultimate Fighting Championship, former champion Brock Lesnar moved forward to take down Alistair Overeem inside a cage at the MGM Grand Garden Arena in Las Vegas. Lesnar, a former NCAA wrestling champion and the sport’s biggest draw, had taken down every opponent in his mixed martial arts career. Included in that list were three former All-American wrestlers, and an Olympic silver medalist in judo.

But this time, against an opponent with no competitive background in wrestling, he faced disaster. Overeem battered Lesnar with a barrage of blows. Particularly devastating were kicks and knees to Lesnar’s body, which was recovering from colon surgery after two attacks of diverticulitis. After two and a half minutes, Overeem not only finished Lesnar — he ended his career.

The win made Overeem the top contender for the UFC heavyweight championship, held by Brazilian Junior dos Santos. Dos Santos is, like Overeem, a knockout artist (albeit 18 pounds lighter and not nearly as muscular) who has proven to be difficult to be taken off his feet. The match is scheduled for May 26 at the same MGM Grand Garden Arena

Whether it will actually take place, of course, is anyone’s guess. First the Nevada Athletic Commission has to meet with Overeem about a failed steroid test that he took on March 27.

The circle of life in combat sports is such that when a big drawing card is on the way down, promoters hope and pray that on his way out he loses to someone who can fill the void. It often doesn’t work out, but when it does, it’s magic. The best recent example was in boxing, where a fading Oscar De La Hoya fell to Floyd Mayweather Jr. and Manny Pacquiao before retiring. Neither were huge drawing cards before being linked with De La Hoya — but after, Mayweather Jr. and Pacquiao’s drawing power increased exponentially. The two men have carried their sport financially.

Without a PED controversy, Overeem would be the perfect superstar for the sport that desperately needs one. The 6-foot-5, 256-pound fighter is a promoter’s dream. He’s the biggest and most muscular player in the sport; with his small waist, bowling-ball deltoids, and balloon biceps, he looks like everyone’s fantasy of a heavyweight champion fighter. But he also has rare charisma and a confidence — some would say arrogance — that inspires both fanatical devotion and hatred.

And he’s backed up his talk. Since winning the Strikeforce heavyweight championship on November 16, 2007 in San Jose, California, only one of his 11 opponents has gotten out of the first round. He hasn’t lost once in mixed martial arts since that night, with a perfect record marred only by a no contest back in 2008, when an opponent couldn’t continue after an accidental low blow. Just before signing with the UFC last year for his fight with Lesnar, the 31-year-old Overeem held an unprecedented three world championships in two different fighting sports. Besides Strikeforce (the no. 2 MMA organization in the U.S.) he was champion both in Japan’s DREAM League and as a kickboxer in K-1. In an era of sports specialization, the idea of being a world champion in three different leagues — with vast differences in techniques, strategies, and rules — is almost impossible. And for advertisers and UFC president Dana White, he’s a potential franchise at a time they could use one.

Between 2005 and 2010, the UFC was the fastest-growing sports organization in the U.S., with revenues growing from about $30 million to more than $350 million annually. Its biggest event of 2011 drew 55,724 fans to the Rogers Centre in Toronto — building officials estimated they could have sold 100,000 tickets if they were available — and the $12,075,000 gate was the largest for any event ever held in Canada’s largest city. Yet, despite a network TV deal with Fox that pays them $100 million a year, many mainstream sports outlets give even the biggest fights minimal coverage. UFC is still banned in New York, and a recent Siena Research Institute poll showed that 52 percent of New York State residents say it should continue to be outlawed; 38 percent support the sport.

The question of whether steroids will be an issue for the UFC cuts to the heart of the very future of MMA. Besides the label of brutality it has spent much of its existence trying to fight, the UFC may now also get the tag of being a drug sport, which would threaten its mainstream acceptance even more, driving away casual fans and sponsors alike.

Which is why most serious fans think that if Overeem is allowed to take down dos Santos it could be nothing short of an abject disaster.

Alistair Overeem was born in London, but at the age of 6 he moved with his mother and older brother, Valentijn, to Amsterdam. It was Valentijn who first brought him to the gym and trained him in both kickboxing and submissions at a time when the term “mixed martial arts” didn’t even exist. In those days, events like UFC paired style against style — wrestler against kickboxer, jiujitsu fighter against boxer. Most fighters were good at one aspect of fighting and matched their skills with similar opponents. Thanks to his brother, Alistair was ahead of the curve from day one.

From 1999 to 2006, Overeem had a 10-8 record in Japanese competition, fighting at 205 pounds. The popular claim is that he had to starve to make weight, but in 2007, when he beat Paul Buentello, he had moved up to the heavyweight class and weighed in at 224 pounds. By 2010, he was fighting at 262 pounds, having gained 38 pounds of muscle in three years with no added body fat. No fighter has ever gained that amount of pure muscle in such a short period of time, nor has any fighter moved up a weight class, let alone gained nearly 60 pounds of fighting weight. Eyebrows were immediately raised.

Performance-enhancing drugs are a huge topic in MMA. Top trainers will tell you that there are plenty of clean fighters, but usage in the sport is widespread. It’s readily accepted that the current testing procedures — in which most fighters are only tested on the day of their fights — are far too easy to beat. The ones who get caught are either lacking in sophistication or double-crossed by their bodies, which can emit a positive result even when the drug is supposed to have already cleared their system.

But in a culture where cheating is assumed to be widespread, two names are whispered about the most. The first is top female fighter Cristiane “Cyborg” Santos. No one was shocked when Santos, who is more muscular than all but a few of the male fighters, tested positive for the anabolic steroid Stanozolol after her December 17 win over Hiroko Yamanaka in San Diego. She was stripped of her women’s world featherweight championship and suspended for one year.

The second, of course, is Overeem.

Overeem had a press conference in Las Vegas on March 27 to promote the dos Santos fight. As soon as it was over, he and five other fighters at the press conference were ordered to immediately give a specimen. None of the fighters were expecting a test, and there was no time to drink any of the remedies athletes use — like green or white tea — to help mask high testosterone levels.

On April 4, the results came in. The other five tested clean. Overeem tested positive for artificial testosterone. A few hours later, Dana White blew his cool while talking with Canadian media.

“I am beyond pissed about this,” he said. “I’m so fucking mad right now I can’t even begin. The worst part is he sat in front of us and lied to us. How fucking stupid do you have to be? Seriously, dumb. Anyone who is using [performance-enhancing drugs] right now is an absolute fucking moron. It’s beyond belief. It’s beyond comprehension. You’re an absolute moron, a brain-dead absolute fucking dummy. It goes beyond a guy having any common sense whatsoever.”

But Overeem has not been replaced in the main event — and speculation is rampant around the industry that Nevada will license him. Those close to the situation have said that Overeem, who has refused all interviews on the subject, will use what is now known as the “TRT” defense. That is, he will have a doctor say that his body is not producing enough testosterone, and thus he has a prescription for the testosterone the test detected. The subject has been a hot-button issue since late 2010, when Chael Sonnen, the no. 1 middleweight contender, failed a similar testosterone test in a championship fight that he lost to Anderson Silva and claimed artificial testosterone was necessary for him to function because of acute hypogonadism.

But a number of fighters — including major names like Mark Munoz, Michael Bisping, and Tito Ortiz — have said the TRT defense is just an excuse to use steroids and shouldn’t be allowed. When Overeem took a test on November 23, his testosterone level was normal. His next test, a few weeks later, similarly showed nothing unusual. When, prior to the Lesnar fight, Overeem filled out a questionnaire that asked about prescription drugs he was taking, he didn’t list testosterone. One also needs special permission and has to run through a series of tests to get approval; Overeem never made a request. So he’s going to have to find a doctor who will state that, between the Lesnar fight and March 27, a severe medical condition was discovered in Overeem’s body, one that resulted in his body no longer producing healthy levels of testosterone.

Yet, through all of this, both Overeem and dos Santos are talking as if the fight is a given.

“If the fight happens, I will fight with pleasure,” dos Santos told Globo.com recently in Brazil. “The ratio of testosterone in his body may increase by 30% his strength and aggressiveness, I was told by people who know the subject. It will really be an unfair fight, but as a fighter, I will be ready to face anyone.”

Of course, dos Santos is right: Facing someone in MMA on steroids is very different than in other sports. It’s one thing when using performance enhancers helps you lift more weights, run faster, or a hit a home run that would otherwise be a fly ball caught in deep center. It’s another when it enables a fist to hit a face with far greater power and more easily knock an opponent unconscious. And that’s why, if Overeem is allowed to fight, as so many have speculated inside the industry, the biggest black eye won’t be on dos Santos, but on the sport itself.

Filed Under: College Sports, Sports, The U, UFC