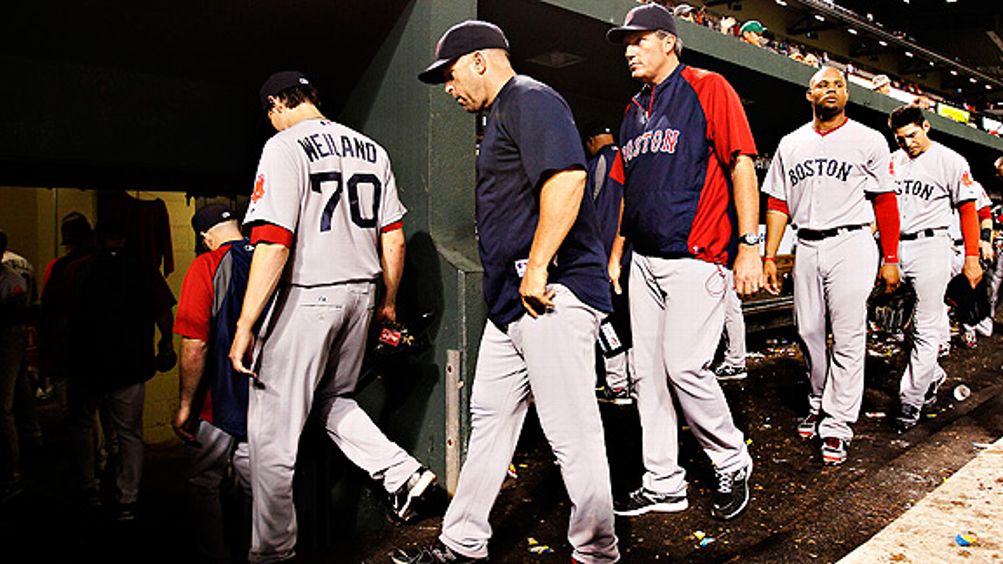 The Red Sox have blown their nine-game wild-card lead, giving it all up in 23 days. They can’t pitch, can’t find timely hits, can’t do anything to stop the slide, short of bribing Scott Proctor to sign three-day contracts with every team they play. They’re two days away from completing the biggest September collapse in major league history. And the guy trying to slam the nail in the coffin is Robert Freaking Andino.

A sub-replacement player in his previous six years in the major leagues, Andino was an afterthought of a player, hitting just six homers in 440 plate appearances,1 pairing a lousy batting eye with an inability to hit for average. Then he met up with the Red Sox. On Sept. 19, Andino blasted a two-run homer that gave Baltimore its margin of victory over the Sox. The next day, with his team trailing 5-4 in the eighth, he ripped a game-winning, three-run double off Jonathan Papelbon. The spoiler Orioles had found their very own shit disturber.2

Last night, Andino topped all that. With two on and two out in the sixth, he smashed a Josh Beckett pitch deep to center. Jacoby Ellsbury raced back, hit the warning track, reached out, appeared to catch the ball … and then this happened. Andino raced around the bases, crossed home, and dealt a crushing blow to Boston’s playoff chances.3

Normally you’d call a light-hitting utility infielder delivering game-winning or game-clinching hits three times in a week against your team a terrible omen. But that’s small change for Sox fans being tortured by this collapse. Boston sends Erik Bedard to the mound Tuesday to try to save the team’s season. Just before his last start, a process server (wearing a Yankee cap, no less) handed Bedard legal papers seeking increased child support. Four days later, a TMZ reporter texted John Lackey just before his start, seeking comment over a story breaking the news of Lackey’s pending divorce. We’re one tell-all book by Tim Wakefield’s manicurist away from completing the starting-pitcher-ring-of-shame triple play.

The results have been unspeakably ugly. The Sox have gone 6-19 in September. They’re 2-19 this month when scoring fewer than 12 runs. The carnage started with Boston’s pitching attrition, as injuries to Clay Buchholz and Daisuke Matsuzaka ripped holes in the rotation, and Lackey’s season-long struggles made it worse. Then the normally dominant offense started showing signs of wear, weakened by injuries to Kevin Youkilis and slumps by notable hitters such as David Ortiz (one homer in September) and Dustin Pedroia (who’s been better in the past few days, but still owns a .303 OBP this month). Then Jon Lester started losing it, yielding 16 runs in his past three starts, covering just 13.2 innings. Now Beckett, the team’s most reliable starter this year, has caught the bug, serving up six runs in six innings to a lousy Orioles squad last night. Just about everything that could have snowballed has, except for Ellsbury, before he smushed his face into a wall.

Boston media’s already hinting at the fall guy, and it’s Terry Francona. From a sabermetric perspective, it’s difficult to see why. Boston’s skipper hasn’t done anything particularly galling during his team’s terrible September. You’d even have a tough time finding a non-move that Francona clearly should have made … with the possible exception of slotting Alfredo Aceves into the rotation, assuming you think Aceves could pitch six or seven innings per outing as well as he has two or three. But that’s not how sports work. If the Sox complete the Esther Clavin international sign for choking, we’re going to hear calls for Francona’s head, because nuance and analysis are hard, and scapegoating is easy.

James Shields isn’t going to win any postseason awards. He won’t even come close. But he deserves some kind of tribute. So here goes: He’s the biggest reason why the Rays could be back in the playoffs for the third time in four seasons.4

Shields will end the 162-game slate with more complete games than any pitcher in 12 years. He’ll finish a tick short of 250 innings pitched for the season, having gone eight or more innings in 15 of his 33 starts. He’ll have nearly four strikeouts for every one walk allowed. He’ll have saved a severely depleted bullpen from being exposed, letting its only two reliable members do work on days when less reliable starters (read: everyone in the league not named Verlander or Sabathia) took the ball.

There are elements of what appear to be good luck and positive regression involved, including a batting average on balls in play 80 points lower from last year to this, and one of the highest strand rates in the league. But Shields’ remarkable year-to-year turnaround has been about more than good fortune, pitching in front of an elite defense, or the benefits of a pitcher-friendly park. Rays pitching coach Jim Hickey recently detailed the big changes in Shields’ approach, from his pitch selection to pitch sequencing. This is a different pitcher than the guy we saw in 2010.

If the Rays falter in these next two games and Shields gets dealt this offseason, he’ll have left on a high note, narrowly missing yet another complete game at the end of a huge season.5 A year ago, jaded Rays fans slapped Shields with one of the best mocking nicknames of all time: Yields. No longer. James Worthy’s term has officially ended. We have a new, deserving Big Game James.

The Cardinals tried to play Whiteyball last night. They may have torpedoed their season as a result.

The 1980s edition of the St. Louis club embraced the tactics espoused by their manager Whitey Herzog. Playing in a cavernous ballpark, on fast artificial turf, Herzog craved players who could steal bags, take the extra base on singles and doubles, and chase down fly balls and grounders hit deep into outfield gaps and infield holes. Small-ball tactics made sense for that team, in that era, and the Cardinals won three NL pennants in a six-year stretch thanks largely to their Whiteyball-brand players and Whiteyball-brand strategies.

Last night, Tony La Russa tried similar small-ball moves to steal a win in Houston. Trailing by two runs in the seventh, La Russa figured it’d be a swell idea to throw away one of the nine outs he had left. After the first two runners reached base that inning, the Cardinals manager ordered Nick Punto to bunt. Punto will never be confused with a dangerous power hitter, but he knows how to work the count and draw a walk. Skilled though he might be at bunting, letting Punto try to work his way on base was the only defensible play down two runs. La Russa ordered him to bunt anyway. Punto got the sacrifice down, the next two batters hit harmless groundouts, and the Cards failed to score.

The next inning, the Cardinals doubled down on their Whiteyball ways, this time with mixed results. After Albert Pujols and Matt Holliday both reached to start the inning, they shocked the Astros by pulling off a successful double steal — despite the risk of taking the tying run off base with one of the best hitters in the league at bat. Lance Berkman made the move look good anyway, doubling home Pujols and Holliday to tie the game. After a Yadier Molina walk, Ryan Theriot came up … and bunted, following Punto’s lead an inning earlier. This sacrifice was more defensible. The Cardinals needed just one run to take the lead and their bullpen had mostly performed well in recent weeks. This sacrifice also proved fruitless, though, as the next two hitters failed to cash Berkman and Molina, and the Cards left the eighth inning still tied.

The lowlight of the inning came at the end. With two outs, Nick Punto hit a little roller to first, where stone-handed Carlos Lee bobbled it, creating an opportunity for Punto to potentially beat the throw and put St. Louis ahead. Punto then pulled off the dumbest move in baseball, sliding head-first into first. To the surprise of no one in the universe who understands the most basic laws of physics, Punto’s slide slowed him down just enough for the Astros to narrowly throw him out, ending the threat. Resurrecting choice strategies from the Cardinals’ glory years can have its advantages. Even the most hardened stathead can find the utility of a well-placed sacrifice or a stolen-base attempt in an unusual situation, when the odds are in the aggressor’s favor. Just don’t be stupid about it. Teams should install pits of molten lava in front of first base during spring training to remind their hitters never to slide in that situation. Even if the runner forgets, “J. Smith, 15-day DL (lava)” would be a sentence of agate type that fans wouldn’t soon forget.

Whiteyball came back to bite the Cardinals twice more before game’s end. First, the Cards ran into two outs on the basepaths in the 10th, with Molina getting thrown out at third on a one-out grounder, and Theriot getting caught stealing. Then the Astros, as Keith Law elegantly put it on Twitter, hoisted La Russa by his own petard. After a leadoff double by Brian Bogusevic, the Astros laid down a sacrifice, then caught a break when Octavio Dotel blew the play. Angel Sanchez followed with a bunt of his own, scoring Bogusevic and winning the game.

If the Cards come up a game short in the standings this year, they’ll remember blowing a four-run lead in the ninth to the Mets, then losing four days later on a walk-off squeeze. Ouch.

The Braves simply got lucky. They grabbed an early 2-0 lead, watched their 21-year-old rookie Randall Delgado shut down the Phillies for the first three innings of the game, then witnessed a gradual and predictable Philly comeback, one that led to a 4-2 loss. But the Cardinals’ loss last night bailed them out.

Atlanta is running on fumes at this point, with two of its top starters out for the rest of the regular season and — if the team makes it that far — the NLDS, too. A one-game lead is big when there are only two games left to play. Of course, that could all go away if Derek Lowe lays another egg. The veteran right-hander has lost his past four starts, yielding 41 baserunners and 20 runs over 19.2 innings. If the Phillies play all their regulars as they did last night, Lowe might need a heroic effort to preserve his team’s wild-card lead.

Should Lowe not come through, the Braves will have to hope that entropy keeps ruling the day. As MLB ponders adding another wild-card team, let’s enjoy the delightful chaos that’s broken out these past few weeks. The lowly Orioles and Astros hold the key to four teams’ seasons, Robert Andino and Angel Sanchez are deciding games, and two reeling teams’ survival rests with two pitchers with Red Sox ties who recently got served, in one case literally.

Get ready for an insanely fun two days. Unless you’re a Sox or Braves fan. In which case, feel free to resume freaking the hell out.

Previously from Jonah Keri:
Can the Rays’ Surge Top the Red Sox Collapse?
How Television Could Launch a Rangers Dynasty
How Do the Angels Keep Winning?
The Road Map for a Cubs Resurgence
Six Teams You Don’t Want to Face in the Playoffs