Reading Between the Lines

Something to Believe In 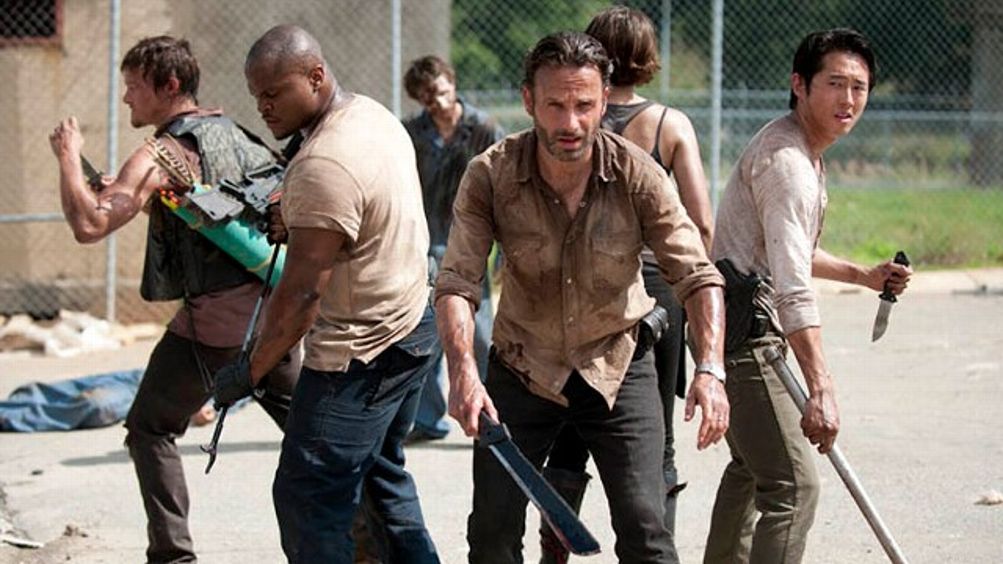 A lifetime of apocalyptic zombie fiction has taught me that there are two sets of questions worth asking when the world ends. The first is abstract and existential: What just happened? What did it mean? Who are we now? Do we rebuild or start fresh? The second is more immediate: How do I stop this undead mailman from devouring that leg? One is a luxury, the other a necessity — especially if the leg in question is attached to you.

All good storytelling is pitched somewhere between those two poles, of course. But in its second season, The Walking Dead — which returns this Sunday night at 9 p.m. EDT on AMC — stumbled somewhere in the hazy middle ground: too talky to be scary, too vicious to be smart. It’s certainly possible to argue that marooning the ferociously gory show on a picturesque horse farm wasn’t a bad idea on paper — after all, even Lost, which remains a benchmark for big-idea genre storytelling, frittered away an entire year pushing our buttons in an underground hatch. And, who knows, an extended break from feasting on brains might have given our heroes a chance to use their own. But aside from a few striking exceptions (the highway herd in last fall’s season premiere comes to mind), this shifting of focus away from the undead wound up sticking viewers with something far more heinous: the living.

Frank Darabont, the Oscar-nominated writer/director responsible for adapting Robert Kirkman, Tony Moore, and Charlie Adlard’s comic book for the small screen, clearly — and admirably! — hungered to give his sweaty avatars a chance to grapple with the sort of outsize issues befitting humanity’s last hope, but any attempts to do so went down as smoothly as Lori’s morning-after pills. Philosophy can be a drag even when philosophers expound upon it. So imagine how it sounded emerging from the dehydrated pecan pie-holes of Rick Grimes & Co.: all clipped He-Man growls about danger and democracy while the women were, quite literally, left pregnant and (presumably) barefoot in the kitchen. Episode after episode of Rick and Shane bashing each other over the head taught us precious little about death and less about survival, but plenty about endurance. By March’s finale a number of lead characters bought the farm, but it was hard not to consider them lucky: At least they were no longer stuck on it.

As it turned out, the most compelling drama was actually happening off-camera. Midway through filming — and mere days after amping geek adrenaline at Comic-Con — Darabont was 86’d by AMC. The reasons given for the surprise firing ranged from budgetary — all that latex and corn syrup can’t be cheap — to the impossibilities of adapting a feature-film mind-set to the weekly meat grinder of serialized television. But here’s the shorter-than-Carl version: Creatively, Darabont spent the first six episodes of Season 2 driving the show into a ditch; new showrunner, and Darabont’s former no. 2, Glen Mazzara spent the next seven trying to get it out. (The metaphor works better if you imagine the show as a sparkling new Hyundai SUV with Shane’s fingerprints still smeared on the wheel.) There were flickers of improvement almost immediately — the tense barroom standoff with an ornery Philadelphian, for one — but Mazzara’s first few hours in charge were less about telling stories than they were about cleaning house. And then setting fire to said house while a tsunami of zombies stomps through, leaving nothing, not even Mrs. Otis’s beloved recipe for pepper jelly, in their wake.

One hour isn’t enough to make me care if these people survive, but at least I’m no longer perplexed by how long they’ve managed to do so.

But a successful television series, even one as grimly nihilistic as The Walking Dead, can’t be only about burning things down. It also has to build. And so I’m quite pleased to report that The Walking Dead, unlike its monstrous creations, seems to be handling the loss of its head just fine. “Seed” — directed, like the spring finale, by Ernest Dickerson, the very best of the show’s deep bench of directors — is exponentially better than everything that’s come before; it’s a taut, savage, and terrifying hour. In quick, slashing strokes it addresses last season’s failings directly and, in the case of the gripping teaser, it does so with a new (and welcome!) sense of self-awareness: The entire sequence, which I won’t spoil here, is rendered completely without dialogue. Mazzara knows that in the overheated world he’s inherited, pipes and crossbows speak much more forcefully than words. In direct contrast to last season’s waffling, Rick’s actions are now kinetic and decisive. One hour isn’t enough to make me care if these people survive, but at least I’m no longer perplexed by how long they’ve managed to do so.

Showrunning, even in its easiest moments, is grueling, thankless work. But the sort of rescue job Mazzara is tasked with here is even harder: Imagine a doctor attempting surgery on a patient that won’t — that can’t! — stop running. In both cases, the prescription calls for a machete, not a scalpel, meaning everything that wasn’t working has been dispatched more mercilessly than poor Dale was back at the ranch. (R.I.P., Beardo! Your strong morals proved no match for your inherent deliciousness.) So it’s so long to the farm, yes, but also to dissent, dithering, and most instances of dialogue. You can’t put lipstick on a pig, but you can put a gun in Carl’s hands and trust he’ll know what to do with it. (Rest assured, Lori is still Lori. Some rot runs too deep.) Furthermore, Mazzara has wisely doubled down on what The Walking Dead has done best since the beginning: unadulterated zombie carnage. “Seed” alone has a body count higher than most video games, and the camera lingers fetishistically on all manner of gruesome dispatch. In many ways it’s a return to the slick and sadistic black-and-white source material (nothing galled Dead heads as much as Darabont’s needless and dull diversions from Kirkman’s original stories), and Mazzara sent fanboy hearts aflutter with the revelation of Season 3’s ominous new setting (a prison) and hauntingly cool new addition (Danai Gurira as the sword-wielding, undead-accessorizing Michonne) — both drawn directly from the comic.

But both also suggest a potentially worrisome abdication of the perils and promise of attempting to make good TV in favor of a good adaptation. Like the comic that inspired it, Mazzara’s reconfigured Walking Dead is, above all else, a fine and lean killing machine. It’s a smart pivot — and a necessary one — for him to focus on the hard work of staying alive, especially after the equine ennui of what came before. Yet it’s worth noting that he’s in a lot better shape than his bedraggled protagonists: In good times, bad times, and end times, The Walking Dead remains a monster hit, averaging close to 7 million viewers per episode. Those are the sort of numbers that give a showrunner wiggle room and give me hope that Mazzara won’t give in entirely to bloodlust in the weeks and seasons to come.

As I said at the start, there are two sets of questions worth asking when the world ends. And just because the deeper inquiries about who we are and who we might become may have melted into mush in Darabont’s hands, it doesn’t mean Mazzara shouldn’t eventually try asking them again. For an open-ended series, these “luxury” questions aren’t only compelling, they’re downright essential. Even the best horror movies can’t run on an endless loop forever. Serialized TV requires characters, not victims, and unlike other media it demands a continuing investment of time and then pays us back in hope. Sure, injecting an emotion other than sweltering despair into The Walking Dead — whether it arrives in the innocent form of Rick and Lori’s new baby or (heaven forfend!) in a character armed with kindness and quirks in addition to katanas — could prove to be as messy as what was lurking at the bottom of the Greene family well. But it could also make for a better, more lasting series, one with ideas big enough to match its premise. Even pipsqueak Carl could tell you there’s a world of difference between surviving and being truly alive.