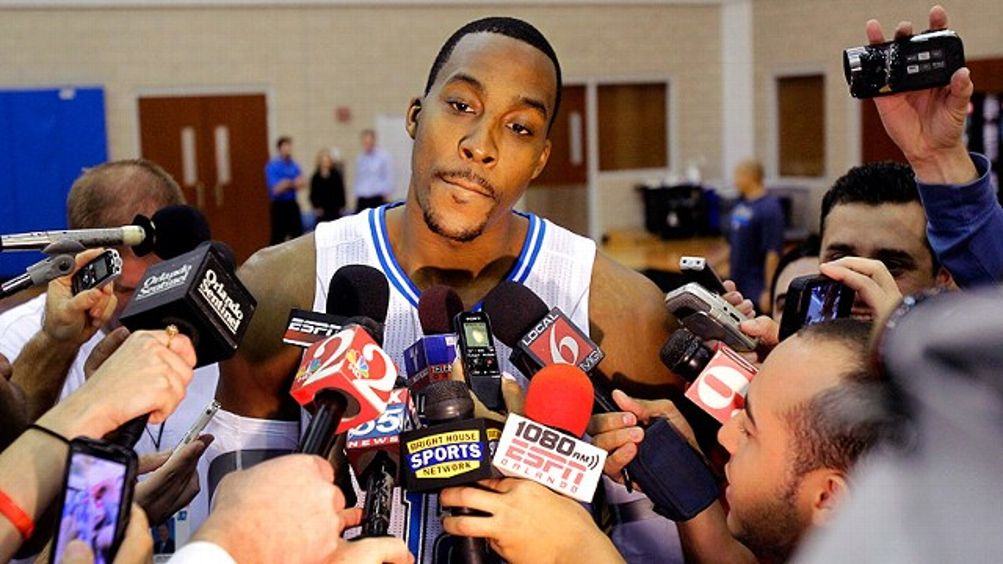 Moviegoers of a certain age may remember Richard Widmark as the psychotic commander of a Navy destroyer, the USS Bedford. His ship floats above a Soviet submarine armed with nuclear weapons. As he dares the Russians to surface, he also orders the Bedford’s sailors to prepare rockets for launch. He is willing to transform the Cold War into World War III. At that point, a German adviser onboard tells Widmark, “This is insane.”

“Don’t worry, Commodore,” Widmark says. “The Bedford will never fire first. But if he fires one, I’ll fire one.”

A frazzled ensign at the rocket launcher hears only the last two words.

And everybody gets blown up.

Reporters hear things, too. And sometimes they get blown up. I’m thinking here of the Dwight Howard hoo-ha. For days before the NBA’s March 15 trading deadline, Twitter was aquiver with conflicting reports on what Howard would do. He would stay in Orlando. No, he would go to Brooklyn. He would opt out of his early termination option — unless he opted in. Reporters cited “sources familiar with Howard’s thinking.” They cited “sources close to the negotiations.” All so much piffwaddle. No one had a freakin’ clue what Howard was thinking because Howard had no clue. He finally admitted as much to Jarrod Rudolph, a columnist for the Orlando-based website RealGM.com. In a BlackBerry exchange after a game in San Antonio, Howard apologized “for this circus I have caused to the fans of our city.”

An editor of a big-time news organization invoked The Bedford Incident by way of explaining to me how the Howard story became this tangle of confusion. It happened because reporters did what reporters do. They reported what people told them, and, alas, as with the Bedford’s beleaguered ensign, they launched tweets with no real idea of why they did it. There hasn’t been so much bad information since Brett Favre’s last ego dance.

Howard’s soap opera began months ago when he announced he wanted to be traded. There’s no news in the pampered class expressing discontent. The great DiMaggio held out for money. Koufax and Drysdale dared O’Malley to go cheap on them. Hank Stram, during a Wilt Chamberlain holdout, threw passes that Wilt caught over the crossbar, only to hear the big man say, “I want to play quarterback.” Howard’s story, however familiar, is different because of its scale.

Newspapers reach thousands in their own towns. Twitter reaches millions around the world. In the 1950s, when Jimmy Cannon wrote for newspapers, he called DiMaggio “one of the loneliest men I’ve ever met and usually he moved through crowds,” which was, really, a tweet before Twitter’s time. But newspapers were beasts fed once a day, with some deliberate thought. Twitter is omnivorous, insatiable, and wants immediate gratification, its maw jacked open for the red meat of speculation, hypothesis, conjecture, and the occasional outright lie. Its appeal is so powerful that more than 100 million people create 250 million tweets a day. A recent study by the University of Chicago Booth School of Business suggests Twitter “may be harder to resist than” cigarettes, caffeine, alcohol, sleep, and sex.

“Such is the world we live in,” to quote that news editor again. It’s sometimes a world of frenzied mistakes. Twitter had Piers Morgan fired. It reported Joe Paterno dead before he was. It declared Gabrielle Giffords dead when she never was. NBA reporters had to knock down a tweet claiming the Lakers had traded Pau Gasol (for which the writer Roland Lazenby apologized). In this mad world of 24/7 competition for clicks, tweets shilling for websites must be answered by one’s own tweets. “If Site X, Y, and Z are reporting a story, people come to our site looking for our take, including debunking,” the editor says. “If there’s a major report out there and our reporters don’t believe it, we can’t just ignore it. We try to come up with a blog post or story with expertise that says, ‘Site X is reporting A, but here’s why we think A might not be true, but B and C might be.'”

We hang with Twitter for the laughs, gossip, rumor, and unverified-but-hey-it-could-be-true information that causes the obsessive-compulsive NBA/MLB/NFL/NCAA reader to jump to a website or to bond with a reporter building his personal brand. “Twitter has changed everything,” says Marc Stein, an NBA reporter for 18 years, first with newspapers, the last decade with ESPN.com. While Stein admits to missing the adrenaline rush of doing a game story on deadline for the morning paper, he understands and respects what Twitter and all social media have done for the sports-reporting business. “The appetite for details,” he says, “is insatiable.” And everything becomes a detail, from salary cap figures to the bare fact of a discussion. “We report everything now in increments, every step of the way.” Stein says that’s important work because sports fans today are so knowledgeable. “Fans think they can general manage better than the general manager and coach better than the coach. Imagine what they think of us reporters. What we can do that they can’t is get behind the scenes. There’s such a hunger for it.”

Even better, Twitter gives us real news that happened five minutes ago — or, as in Pakistan one night, it puts us there in the same minute that a helicopter brings SEAL Team 6 for Osama bin Laden. Without Twitter, the Arab Spring might have happened, but the medium’s instant communications gave muscular voice to those poor souls unheard for decades. One of the 21st century’s great reporters, two-time Pulitzer Prize winner Nicholas Kristof of the New York Times, tweeted so often and so vividly from inside the Cairo riots that his notes were the best of journalism, the first rough draft of history.

It’s a democratic world, Twitter’s, and it allowed everyone to add their own lines, however informed or however mistaken, to the Dwight Howard script. By the March 15 deadline, Howard either would agree to stay with Orlando through the 2012-13 season or the Magic would trade him. Every organization’s “NBA Insider” reported the saga from the “inside,” however far outside that was. One insider’s full website story had quoted “a league source with knowledge of Howard’s intention” saying “Dwight’s gone.” But the next day, in a series of tweets, that same insider wrote:

“After broader team meeting today, Dwight Howard had lunch with 3 teammates and told them he planned to opt-in for ’12-13 season.”

A minute later, this:

“Howard called Magic CEO while sitting at table and informed him of intentions, source says. Still, Magic waiting for him to sign papers now.”

And a minute after that, this:

If the first casualty of war is truth, Twitter’s first casualty is nuance. A reporter who knew Howard as a person and not just as a player might have reckoned that Howard’s real affection for Orlando would trump any adviser’s suggestion that he orchestrate a bully’s power play to get out of town. That reporter might then dismiss much of the chatter coming from sources that asked for anonymity. In fact, that’s what happened with Jarrod Rudolph, the columnist and Orlando media freelancer who broke the story that Howard would stay with the Magic.

“All those tweets,” Rudolph said, “I ignored them.”

He could do that because, in six years covering the Magic, he had developed a relationship with Howard — “not bosom buddies, but we talked” — that enabled him to send a casual BlackBerry note to the player after a game in San Antonio.

“I asked, ‘How ya holding up?'” Rudolph said. “Through all that stuff, he hadn’t been the Dwight Howard that Orlando had come to love. Just so happened, I asked the right thing at the right time. He knew RealGM had been fair to players and to him, and he trusted us enough to confide in me. So he decided to push something out there.”

Howard’s replies enabled Rudolph to send this journalistically delicious tweet at 12:25 a.m. on March 15: “In an exclusive interview, Dwight Howard has confirmed to me that he will … opt-in and stay in Orlando for at least another year.”

At 3:37 a.m., Rudolph’s column went up on RealGM.com. The money quote from Howard: “Man, listen, you know my heart, my soul and everything I have is in Orlando. I just can’t leave it behind.” By 5 a.m., Rudolph said, he was doing radio interviews on his scoop.

Finally, then, Twitter got it right. And nobody else got blown up.

@DaveKindred has arrived, slowly, at 1,904 followers.