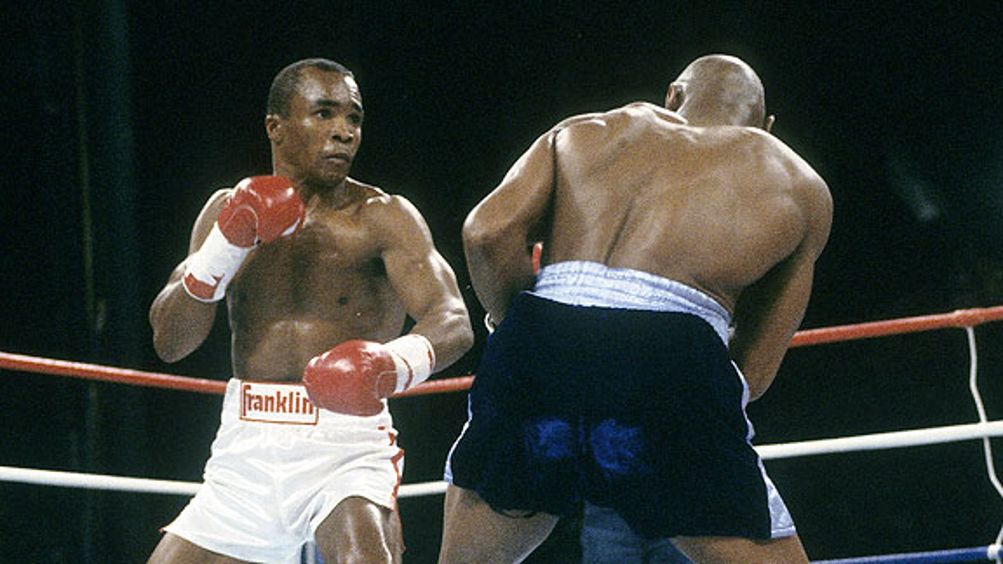 “The 1980s were a golden age for the welterweight and middleweight divisions of boxing. The era was headlined by four all-time greats: Sugar Ray Leonard, Marvelous Marvin Hagler, Thomas Hearns, and Roberto Duran. Between 1980 and 1985, each of them fought all the others, except for Hagler and Leonard. When they finally clashed in 1987, it was the climax of that extraordinary series — not literally the last fight among the foursome, but the last one that mattered. Hagler, the middleweight champion making his 13th defense, and Leonard, the former welterweight champ who was coming off a three-year retirement, were fighting for bragging rights over all their rivals. Who could have guessed that they would still be fighting over those bragging rights more than two decades later?”

The Conclusion of the Summer Mailbag

“Q: Could there have been a more natural way for the torch to be passed from ‘The Mike Tyson Zone’ to the ‘Charlie Sheen Zone’ than Iron Mike being a roaster for the Charlie Sheen Roast?
— Cameron, Cleveland”

“SG: Wait, the torch was passed? Did you watch that roast???? I came away thinking that Tyson was clearly a bigger wild card than Sheen. Think about the concept of the Tyson Zone: It’s when a celebrity reaches the point of insanity that you’d believe any story about them no matter how crazy it is. After watching Tyson alternately giggle and heckle his way through the first 20 minutes of that roast with that deranged smile on his face, had you paused the telecast and read me a list of insane possibilities like, ‘Tyson is going to see someone eating a hamburger in the audience, then charge into the audience and take that person’s hamburger by force,’ ‘Tyson is going to get horny and it’s going to take six people to pull him off Kate Walsh’ or ‘Steve-O makes an Islam joke and Tyson beats him to death with a microphone,’ I would have believed it.

“Meanwhile, how can Sheen steal the ‘Zone’ title when words like ‘lucid,’ ‘coherent’ and ‘in control’ could have described his appearances at the 2011 Emmys and his own roast? As far as I’m concerned, Tyson faced the biggest threat to his ‘Zone’ domain since Michael Jackson, fought it off and reestablished himself as our defining ‘Zone’ celebrity. It’s like boxing — you have to beat the champ to take his title. Sheen went head-to-head with Tyson and lost. Long live the Tyson Zone.”

“In retrospect, this seems like a much weirder thing to do with your ’80s than dress like Jim McMahon and listen to Cinderella, or pronounce Duran with a “j.” But it turned out to be the way a lot of people wanted to spend their ’90s, when even in deeply annoying moments, like the famous Stipe VMA’s strip-tease of 1991, they reigned as Nirvana’s not-as-rocking weird uncles (Kurt Cobain famously had Automatic for the People on the stereo the day he killed himself). For a while it seemed like they’d just be giant rock stars forever, in that resilient integrity-swilling way Neil Young is, only bigger. But the brain aneurism that sidelined drummer Bill Berry in 1995 removed their musical motor and seriously waylaid their recording greatness. History may reclaim 2001’s Reveal, but I bet Stipe himself can’t even name more than three songs on 1998’s Up. In a sense, R.E.M. were living only as legacy long before they made it official on Tuesday.”

“Given how things were going — and they were going badly — the sucker punch that ended Saturday’s fight was the best thing that could have happened to Victor Ortiz. It came before the evidence of Floyd Mayweather’s precision right hand could build up on Ortiz’s face, before a landslide decision or knockout could confirm what was becoming obvious: Victor Ortiz is a nice story and a power-puncher capable of creating thrilling fights when he’s paired up against live wires like Andre Berto or Marcos Maidana, but he will never be in the same class (or even one class below) as Mayweather and Manny Pacquiao. But because Saturday’s fight ended so strangely, Ortiz not only gets to pound his chest and scream about getting another shot, he also gets spared of the spectacle of his own humiliation.”

“To me, the film that has come out of the last few weeks looking most like a contender is one that nobody in the Oscarverse is talking about. If I told you that a movie made by an Academy Award-winning director starring eight previous acting nominees (four of them winners) opened in first place at the box office and received extremely positive reviews, you’d be thinking it’s in the mix, right? So why aren’t more people — okay, why isn’t anyone — high on the awards chances of Steven Soderbergh’s Contagion?”

Moneyball and the Houston Rockets

By Daryl Morey and Sam Hinkie

“This Friday marks the opening of the movie Moneyball, the on again, off again production of the best-selling book by Michael Lewis. Although we’ve poured the better parts of our lives into the sort of work that will appear on the silver screen, we dread it.

“We know the storyline well and the original characters from the book. The worry is that the movie will be the touchstone for so many people that it will color their image of what a sports franchise is like that marries the objective analysis with subjective (and valuable) insights. We debated just how much the reach Moneyball the movie would dwarf the reach of the book, but settled on this as indicative: Our own parents — with plenty of incentive to have an interest in the subject — were likely 0-for-4 on having read the book, but likely 4-for-4 on the upcoming movie. Eeeh.

“Admittedly, neither of us has seen the movie yet. But the trailer alone pushes a typically divisive storyline of us versus them. New versus old. Or worse, some insinuation of smart versus not. We hate that. It doesn’t have to be that way, and it’s not that way in Houston.”

“Drive, director Nicolas Winding Refn’s hyperviolent ode to fast cars and pink fonts, is crammed with memorable visual details: a tense, gloved hand on a steering wheel, Carey Mulligan’s doe-eyed gaze, Ryan Gosling popping skulls like Birdman pops bottles. But the most iconic image of the film is the white satin jacket worn by Gosling’s character, Driver. Pitched perfectly between immaculate throwback and haute hipster, the ever-present jacket — which becomes ever more bloody as the film progresses — was the work of costume designer Erin Benach, a veteran of films including Half Nelson, Blue Valentine, and even a few not starring Ryan Gosling. We spoke with her about her greatest creation.”

What’s Your Deal?: An interview with Dominic Fredianelli about the film Where Soldiers Come From

“Where Soldiers Come From is a wrenching and deeply absorbing documentary that follows a group of friends from a small town in Michigan’s Upper Peninsula over the course of four years as they finish high school, join the National Guard, head off to Afghanistan for a nine-month tour of duty, and return to their hometown, haunted by the war’s lingering effects on them. The film centers on Specialist Dominic Fredianelli, a talented graffiti artist and muralist, and his pals Cole Smith and Matthew ‘Bodi’ Beaudoin, who are tasked in Afghanistan with clearing roads of bombs and IEDs — not by disarming them Hurt Locker-style, but by rumbling around the countryside in a convoy of indestructible MRAP (Mine Resistant Ambush Protected) armored vehicles, locating bombs simply by running over them and setting them off, like human crash-test dummies. While the evolution of effective bomb-resistant vehicles has saved hundreds, if not thousands, of American lives, director Heather Courtney calls the Traumatic Brain Injuries (TBIs) suffered through these blasts ‘our new signature war wound.’

“Where Soldiers Come From opened Friday, September 9 in New York and premieres September 25 in the Upper Peninsula town of Calumet, with more openings across the country throughout the fall. Grantland’s Davy Rothbart spoke with Fredianelli about his decision to join the National Guard, his time in Afghanistan, and the long, difficult readjustment to life back at home.”

“With all due respect to the first nine items on this list, no. 10, Starter jackets, is to Julie ‘The Cat” Gaffney what nos. 1 to 9 are to Team Iceland.”

“Here’s something I saw in 1998 and was certain I’d never see again: My Giant, starring Billy Crystal and Gheorghe Muresan. And here’s something else I saw in 1998 and was certain I would never see again: Indianapolis Colts fans giving up on their team before Week 3 of the NFL season. While I’m happy to report that I still haven’t given My Giant a second chance, thanks to the absence of Peyton Manning and an 0-2 start, the midnight hour of the Indianapolis apocalypse has already arrived and Colts fans have officially completed the biggest simultaneous jumping off of a team bandwagon in sports history.”