Week 3 Picks With a Pinch of Mailbag 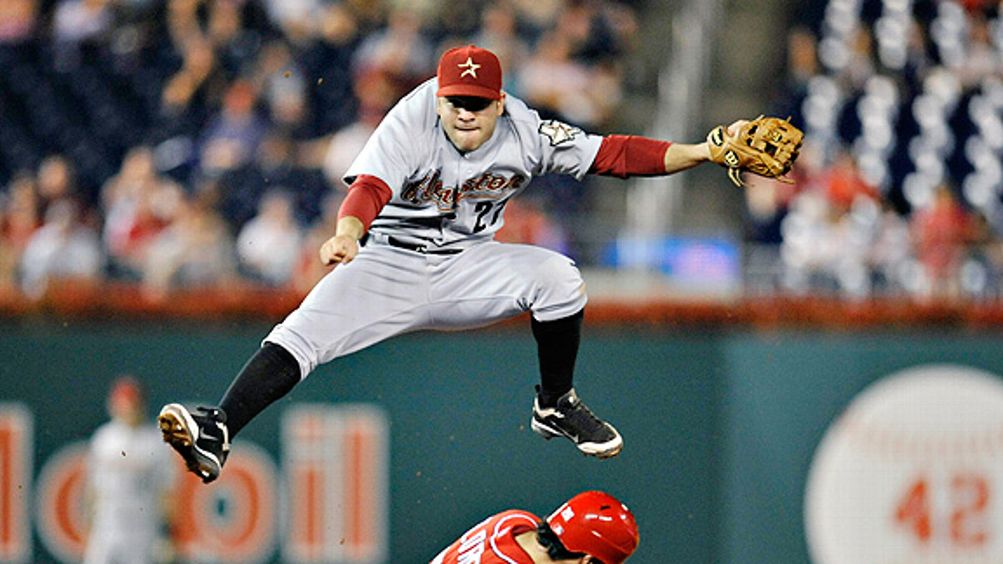 This may be a surprise to readers who are too young to remember the Friends finale, but once upon a time the Houston Astros were one of baseball’s model franchises.

Their cycle of success began 20 years ago, in a season when the Astros lost 97 games. The 1991 Astros had an astonishing amount of young talent for a team with the worst record in the National League. Craig Biggio, in his third full season, was just 25 years old and still a catcher. Luis Gonzalez was a rookie left fielder, and Darryl Kile was a first-year hurler. Ken Caminiti was at third base. Center fielder Steve Finley and right-hander Pete Harnisch had been acquired1 from the Baltimore Orioles the previous winter for star first baseman Glenn Davis, which opened up the position for Jeff Bagwell2 — who was named Rookie of the Year.

In 1992, the Astros improved to a .500 record, and they would have 13 winning seasons over the next 14 years. Beyond wins and losses, the organization was ground-breaking in many ways. The Astros were the first team to open a baseball academy in Venezuela, where they developed and signed players like Richard Hidalgo, Bobby Abreu, Johan Santana, Freddy Garcia, Carlos Guillen, and Melvin Mora.3

After the 1996 season, Houston hired former pitcher Larry Dierker as manager — a bold and controversial move, given that Dierker had spent the previous 14 years in the Astros’ broadcasting booth. Dierker was also known to harbor a strange affinity for sabermetrics, and back then, statistical analysis might as well have been voodoo to the baseball establishment. In a way, Dierker was the progenitor of Joe Maddon’s reign in Tampa Bay; he violated baseball’s shibboleth by publicly expressing disdain for small-ball strategies like the sacrifice bunt. In five years as the Astros’ manager, the team won four division titles.

The Astros lost in the first round of the playoffs all four years under Dierker, but in 2004, under Phil Garner, they made it to within a game of the World Series. The following year, the Astros won the NL pennant for the first time in history, then got swept in the World Series by the White Sox.

They may not have realized it yet, but by then the Astros had already passed their peak. A decade of developing transcendent talent came to an end when Lance Berkman and Roy Oswalt reached the majors in 1999 and 2001, respectively; Houston hasn’t developed a true star since. Over the years, the team relied increasingly on expensive veterans to prop up the team. The 2004 and 2005 Astros coughed up millions for Jeff Kent, Roger Clemens, and Andy Pettitte. Three seasons later, they were all were having their checks signed by other teams, and the Astros had a losing record at 73-89.

This is where the story of the Astros turns sour. All dynasties — and it’s hard to call a bunch of playoff losses and being swept in the World Series a “dynasty” — must come to an end. By 2007, it was clear that the Astros needed to burn things to the ground and start over. Only their owner refused.

The story of the decline of the Astros, much like the story of their success, can’t be told without a discussion of their owner. Drayton McLane bought the Astros in the summer of 1992, and on balance was an asset to the organization for his first 15 years. Like many owners getting to play with a shiny new toy for the first time, he was impatient. Wanting to make a big splash in his first offseason, he signed star hurlers Doug Drabek and Greg Swindell to four-year contracts. After both were disappointments in Year 1, he tried to release them — until it was explained to McLane that their contracts were, you know, guaranteed.

But the Astros prospered under McLane because he did the three most important things an owner can do: He spent money freely, he hired the right people, and he stayed out of their way. Gerry Hunsicker was hired as general manager after the 1995 season, and he directed the team to five playoff appearances in the next nine years.

But the relationship between McLane and Hunsicker frayed over time, and after the 2004 season Hunsicker left — whether he was forced out or decided to move on is still a secret. (It’s no coincidence that Hunsicker joined Tampa Bay’s front office in 2006, two years before the Rays became baseball’s “It” team.) Assistant GM Tim Purpura was promoted, but struggled in his new position and was fired late in the 2007 season.

McLane’s choice to replace Purpura stunned the industry — he hired Ed Wade, whose résumé consisted of eight years as GM of the Phillies between 1998 and 2005, during which time the Phillies had an under-.500 record and never made the playoffs. Wade’s tenure in Philadelphia was most notable for his apparent fetish for relievers. Of his several bullpen acquisitions, the most regrettable came in 2005, when he traded starting second baseman Placido Polanco for Ugueth Urbina.4

Wade got the job in Houston because, unlike other GM candidates, he told McLane what the owner wanted to hear: that he didn’t have to rebuild. And so the Astros blissfully stayed on course. In 2008, the Astros lucked their way into an 86-75 record — they were outscored on the season by 31 runs — but only Berkman and Oswalt were left from the glory years. In 2009, the luck ran out, and the Astros finished 74-88. Wade celebrated that winter by signing middle reliever Brandon Lyon to a three-year, $15 million contract that many considered the worst free-agent signing of the year.5

Even worse, the farm system was a wreck. Years of signing free agents had cost the Astros numerous first-round picks, and what few picks they kept, they botched. It didn’t help that McLane was one of the few owners who insisted on abiding by MLB’s antiquated “slot recommendations” for high draft picks. The same owner who authorized a six-year, $100 million contract for Carlos Lee — a fine hitter who has the defensive range of a lawn ornament in left field — refused to budge when top draft picks wanted an extra couple hundred thousand to sign.

In 2007, the Astros forfeited their first-round pick (for signing Lee) and their second-round pick (for signing 40-year-old pitcher Woody Williams, who would have a 5.27 ERA and lead the NL in homers allowed in his final season). Contract disputes kept them from signing their third-round and fourth-round picks. In 2009, the organization that planted the first flag in Venezuela closed its academy there. Not surprisingly, Baseball America ranked the Astros as having the second-worst farm system in all of baseball in 2008. In 2009 and again in 2010, the Astros were dead last.

Only after starting the 2010 season 16-33 did Wade finally understand that, yes, the Astros would have to rebuild. Berkman — in the final year of his contract — and Oswalt were traded for prospects, which elevated the Astros in the farm-system rankings this spring … all the way to 26.

The Astros’ farm system was at least better than their major league roster, which was a joke. The bottom fell out on the franchise this year. On Sunday, the Astros lost their 97th game, tying the team’s all-time record for losses with more than two weeks left in the season. They’re now 51-97, on pace for 107 losses, with a shot at becoming the second non-expansion NL team since 1952 to lose 109 games.

McLane has finally thrown in the towel — he put the team up for sale last season. His poor timing doesn’t seem to have cost him anything; he has an agreement in place with billionaire Jim Crane for $680 million, roughly six times what McLane paid in 1992. The sale is being held up by the commissioner’s office, which is trying to leverage the owner approval process into convincing Crane to support a realignment plan that would move the Astros to the AL West.

Crane is resisting the move, although Bud Selig’s willingness to leave a franchise hanging until he gets his way should not be underestimated. In any case, Crane has a bigger issue to worry about — whichever division the Astros play in, they’re going to suck for a long while.

Freed from even the slightest pretense of contending this season, Ed Wade did a decent job of converting present talent into future assets. Hunter Pence and Michael Bourn, the team’s two best position players, were traded for seven prospects of varying abilities. Even so, the infusion of talent only upgrades the Astros’ farm system from “terrible” to “below average.”

And what Pence and Bourn left behind isn’t pretty. Diminutive second baseman Jose Altuve led the minors with a .389 average before he was called up in July, and has hit .277/.295/.370 since joining the Astros; on the other hand, he’s listed at 5-foot-7, and it’s widely accepted that he was wearing platform shoes while being measured. He’s your basic David Eckstein starter kit, with contact ability and grit oozing from his pores. At first base, the Astros have Brett Wallace, part of the haul they got last year for Oswalt. In 158 career games — about one full season’s worth — Wallace is hitting .249 with six homers.

In the outfield, the Astros are now playing J.D. Martinez — an unheralded 20th-round pick who had a career line of .342/.407/.551 in the minor leagues, and Brian Bogusevic, who is playing about as well as you’d expect from a former first-round pick — only Bogusevic was drafted six years ago as a pitcher and has found success only after a last-ditch shift to the outfield. On the mound, the Astros have rushed 20-year-old Jordan Lyles to the major leagues. Lyles has a chance to be this generation’s Jeff Suppan, a precocious high school pitcher who reaches the majors at a young age, but whose mediocre stuff will keep him from being much more than a no. 3 starter.

No other significant players on the roster are younger than 26 years old. The 1991 Astros this is not.

Yet the team still has the same inherent advantages it has always had. With New York, Chicago, and Los Angeles served by two teams, the Astros have the fourth-largest U.S. city to themselves. (The Texas Rangers and Philadelphia Phillies have larger metropolitan populations to draw on.) The Astros have a modern ballpark with all the amenities (read: revenue-generating luxury boxes) in place. Houston’s economy has been less affected by the recession than most places in America.

But this time, the rebuilding process will take longer. Houston doesn’t have anyone like Glenn Davis to trade, and the only GM foolish enough to trade premium talent for the next Larry Andersen is the one employed by the Astros. Unless they accept a realignment that lands them in the Pacific Coast League, it’s going to be years before they’re competitive again. Their old owner could never accept that fact. For the sake of Astros fans, here’s hoping their new owner will.

Philadelphia Phillies: The End is Nigh
On the Arizona Diamondbacks’ 2011 turnaround
The Case for Carlos Beltran
The Cleveland Indians’ wheeling and dealing
The Pittsburgh Pirates’ playoff chances